First Designs for the High Line at the Rail Yards 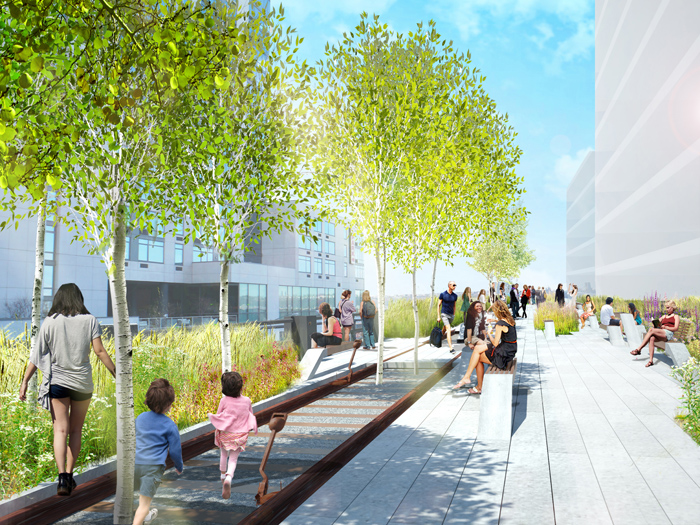 The rail yards section will extend the High Line’s distinctive design vocabulary established south of West 30th Street, evoking the High Line’s history as an active freight rail line, and the unique self-seeded landscape that grew up between the tracks when the trains stopped running in the 1980s.

Last night we unveiled the initial design concepts for the rail yards section of the High Line at a community input meeting at Public School 11 in Chelsea.

More than 400 neighbors, supporters, members, and friends turned out to listen to James Corner and Ric Scofidio, of the High Line Design Team, present their concepts, share their feedback, and ask questions.

The never-before-seen images represent the first vision for the High Line’s unique landscape at the rail yards, which is still overgrown with wildflowers and grasses that grew up between the tracks when the trains stopped running in the 1980s.

Follow us after the jump to learn more and view the designs.

The rail yards section will extend and evolve the design of the High Line south of West 30th Street, and respond to the unique urban context of the new neighborhood to be developed at Hudson Yards. With more than 12 million square feet of new office, residential, retail, and cultural uses planned for the site, Hudson Yards will create a new kind of urban experience unlike anything seen in the Meatpacking District and West Chelsea. Construction of the High Line will be closely coordinated with the development of Hudson Yards, with the park fully built out on the majority of the eastern section of the historic railway, and an interim walkway built over the western section. 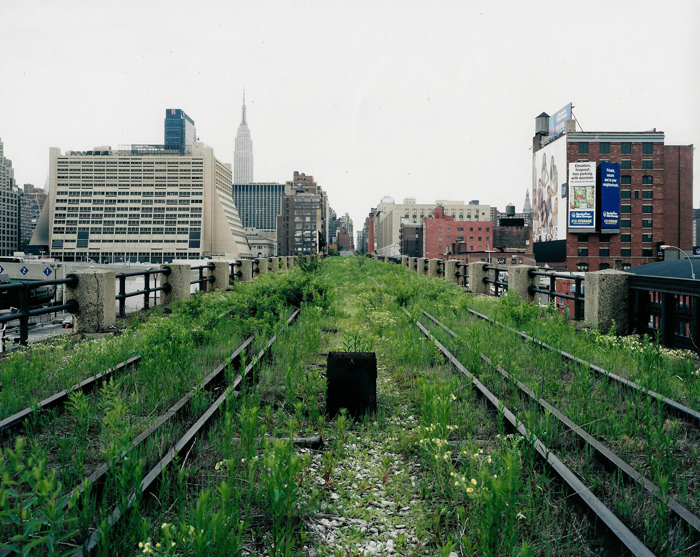 The High Line at the rail yards is the only point where the elevated rail line travels on an east-west axis. This is where Joel Sternfeld captured some of his most iconic photographs, with sweeping views of the Hudson River and the Empire State Building. 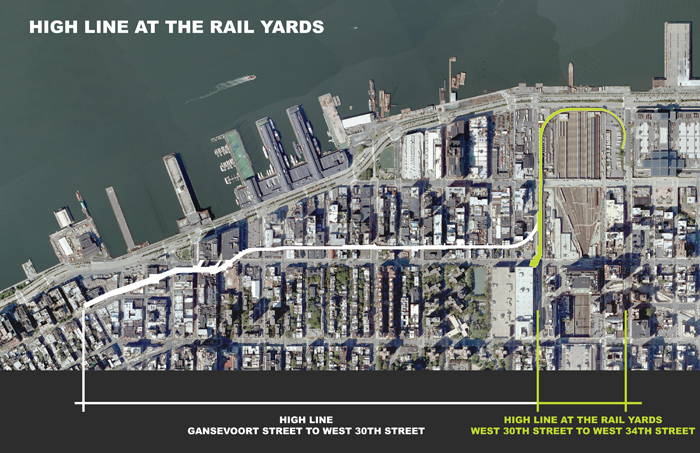 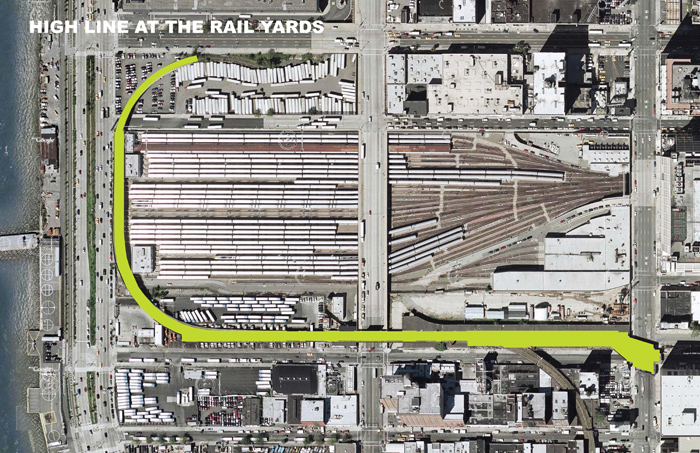 The High Line at the rail yards wraps around the West Side Rail Yards, an active train yard for Long Island Rail Road. The owner of the West Side Rail Yards, the Metropolitan Transportation Authority (MTA) has leased the property to the Related Companies to develop a platform over the yards. The platform will support the development of more than 12 million square feet of mixed-use real estate. 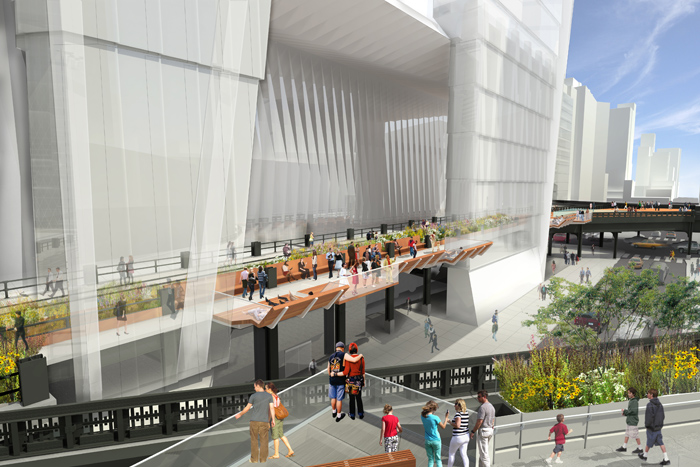 At the northern terminus of the High Line that is currently open to the public, visitors will see the 30th Street Passage to the east, where the rail yards section of the High Line passes through the future Hudson Yards Tower C, leading towards the 10th Avenue Spur. The 70-foot-high passage will feature planting beds and balconies projecting toward West 30th Street and High Line to the south. 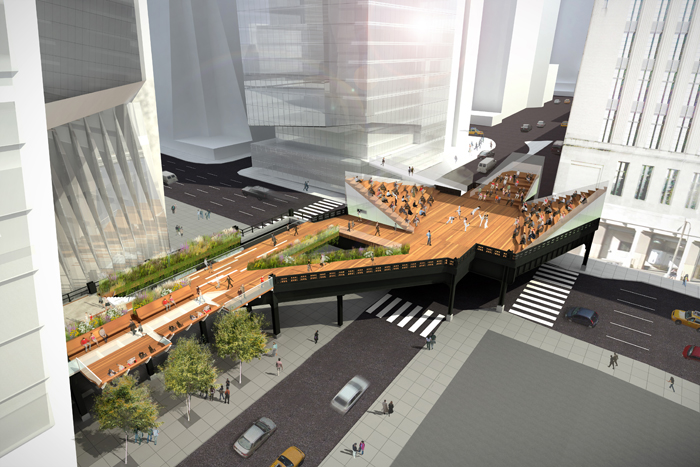 The High Line extends across the intersection of 10th Avenue and West 30th Street to connect with the Morgan Processing and Distribution Center. Decades ago, this extension, called the 10th Avenue Spur, allowed freight trains to carry mail and packages to and from the upper-floor loading docks of the post office building. Today, the Spur is the widest area on the High Line, and it occupies a strategic position in the neighborhood, where it will serve as a visual access point to Hudson Yards, and offer visitors unique views along the north-south corridor of 10th Avenue and the east-west corridor of West 30th Street.

One of the design concepts for the Spur features amphitheater-style seating, creating a unique opportunity for performances or casual gatherings. 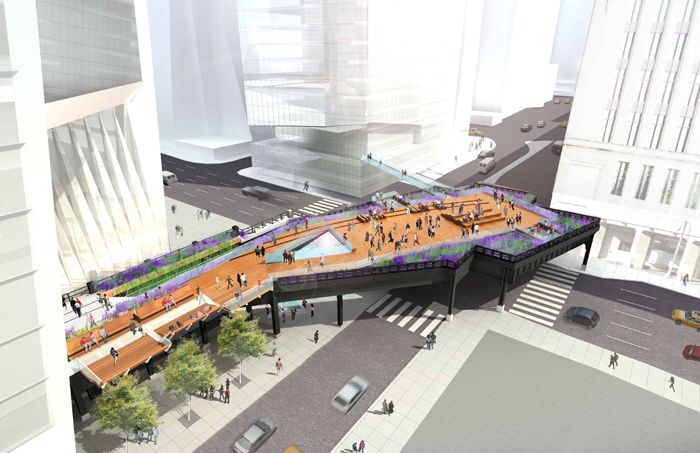 One of several concepts for the 10th Avenue Spur consists of an open gathering space surrounded by dense plantings of wildflowers and grasses. 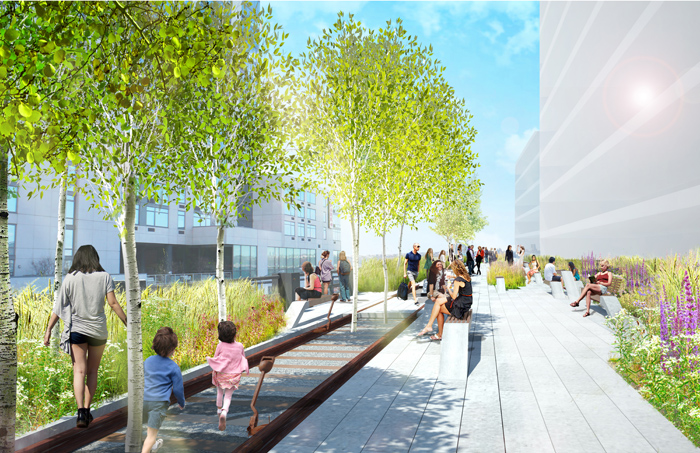 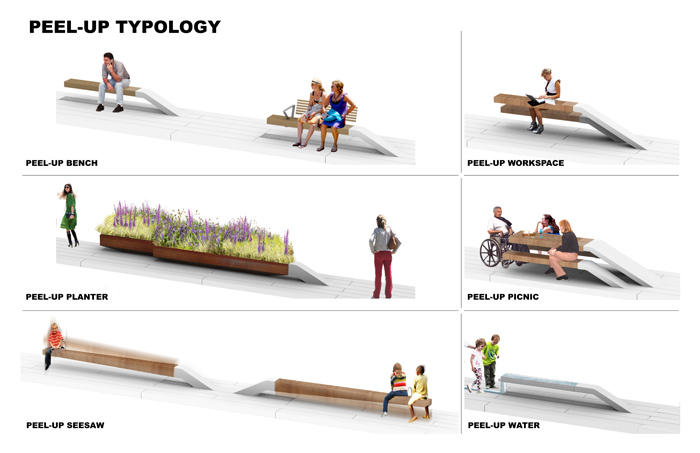 The design of the rail yards section will take the best of what was created for the High Line south of West 30th Street and adapt it to take advantage of the new context at Hudson Yards. Along the High Line that is currently open to the public, the park’s “peel-up” benches are an integral part of the landscape design, rising organically from the planks of the walkway. In the rail yards section of the High Line, the “peel-up” bench design will evolve into a new family of elements to offer seamless transitions from the walkway to more seating, play features, planters, and more. 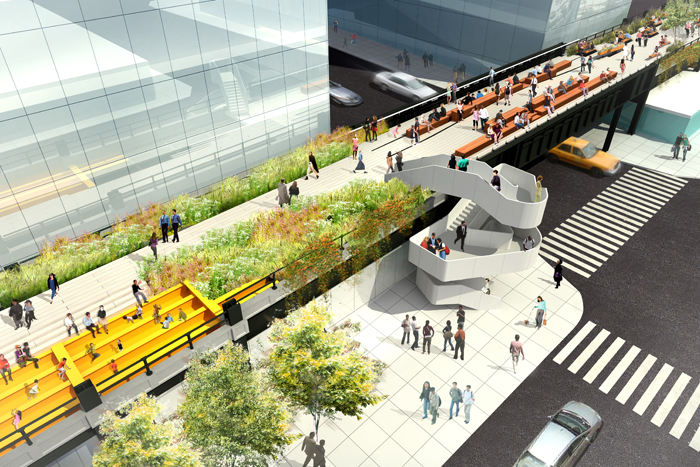 As the High Line passes over 11th Avenue at West 30th Street, visitors will find lush plantings, groupings of bench seating, a unique play feature for kids, and a new stair that provides access to the street, as well as a series of overlooks to take in views of the High Line, the cityscape, and the Hudson River. 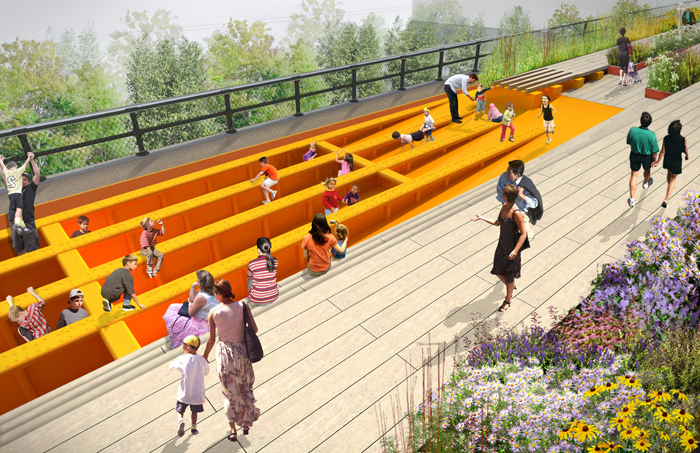 The High Line’s concrete deck is removed, revealing the framework of the High Line’s original beams and girders, covered with a thick rubber safety coating, and transformed into a unique play feature for kids. 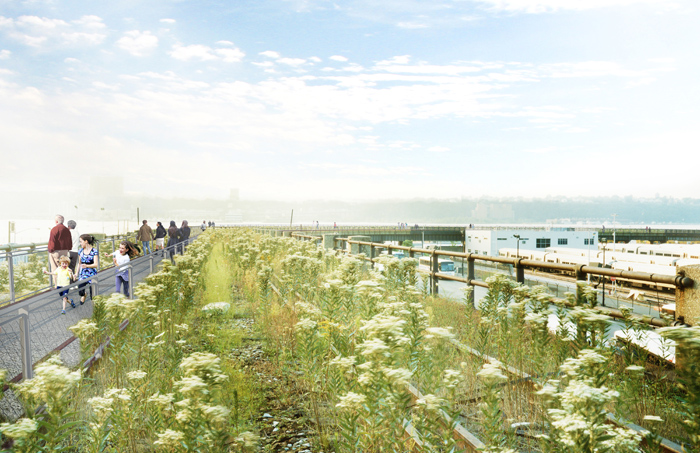 While the Eastern Rail Yards will be designed in a similar way as the High Line that is currently open to the public, the Western Rail Yards will feature an interim solution – a simple path through the existing landscape – that will allow the public to directly experience the self-sown grasses and wildflowers. 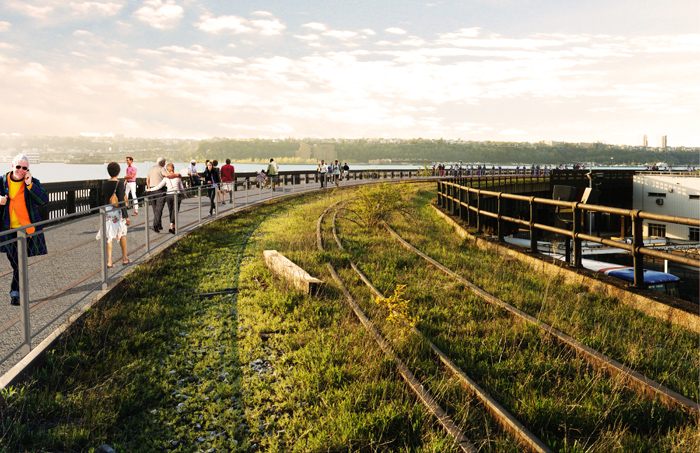 The interim walkway will float above the existing, self-seeded landscape. Here, the walkway winds along the curve of the High Line at West 30th Street and 12th Avenue, and provides visitors an opportunity to see the original railroad tracks and Hudson River in a whole new way. 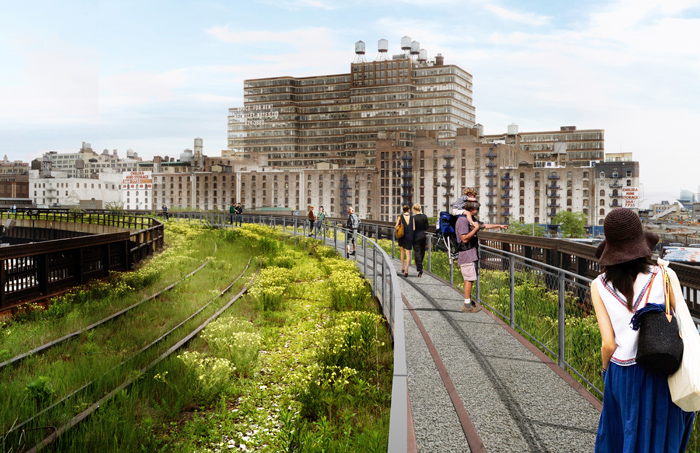 A simple design solution to respond to the phased construction of the High Line and Hudson Yards, the interim walkway would provide public access to the entire length of the High Line, allowing visitors to walk all the way to West 34th Street and experience new views of the city.

Working with feedback from our input meetings, the Design Team will work to further refine the designs. We look forward to opening the High Line at the rail yards to the public as soon as possible.

The estimated total cost of capital construction of the High Line at the rail yards is $90 million. The City of New York has launched the public review process for a zoning text amendment that would set a framework for critical funding from the Related Companies for the portion of the High Line on the Eastern Rail Yards. The funding would cover approximately 30% of the estimated total cost of building the High Line’s final section, and would pave the way for construction to begin later this year.

Friends of the High Line is actively raising funds for the Campaign for the High Line, which supports the capital construction of the rail yards, as well as other capital projects, and the endowment for the park’s future maintenance and operations. Last summer, The Tiffany & Co. Foundation generously made a $5 million challenge grant to the Campaign, and two long-time supporters of the High Line, Donald Pels and Wendy Keys, stepped forward with a $5 million grant of their own. Then in the fall, the Diller – von Furstenberg Family Foundation made a $20 million pledge – the largest pledge to a public park in New York City’s history. To date, Friends of the High Line has raised $38 million toward this phase of the Campaign for the High Line.

Weren’t able to join us? You can still share your feedback by emailing us at railyards@thehighline.org.