Park update: The High Line will be closed between Gansevoort St. and 14th St. from 9:30pm to close on Wednesday, June 29. The southernmost access point will be 14th Street (elevator/stairs).

Next Big Idea: Jeff Koons' 'Train' at the High Line 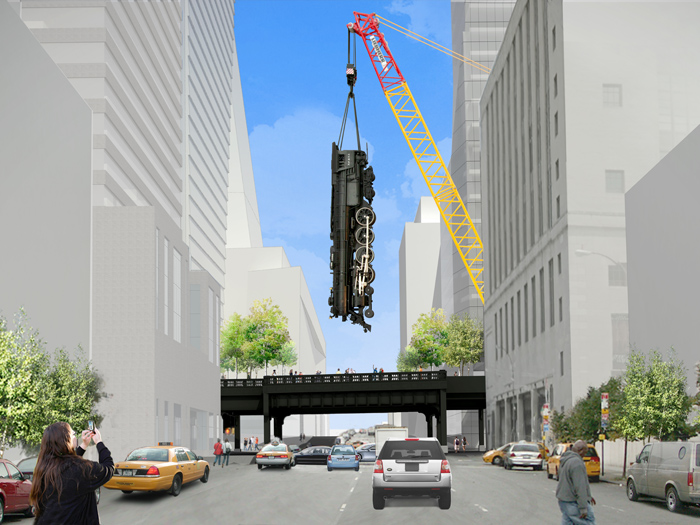 As we continue to refine the initial design concepts for the rail yards section of the High Line, the design team is studying a range of options for the 10th Avenue Spur, with the objective to make it one of the major gathering spaces at the park.

We showed two initial design concepts for the Spur at a community input meeting on Monday, March 12, and we also wanted to share a potential art installation conceived by artist Jeff Koons that could work with either of them.

As one more far-reaching ideas – one that would bring trains back to the High Line in a big way – the art installation, called Train, would feature a full-size replica of a 1943 Baldwin 2900 steam locomotive suspended from a crane above the Spur.

Koons’ Train installation at the High Line was not included in the March 12 presentation because it is simply an idea – one that is not integral to the rail yards design at this point in time. Train is in the very beginning of the exploratory stage, and it would require a thorough review by diverse stakeholders should the project move forward.

“Jeff Koons’ Train is part of a long history of big ideas for the High Line, but even if never realized, it embodies our commitment to innovation, creativity, and finding new ways to experience the city,” said Robert Hammond, Co-Founder of Friends of the High Line. “People thought we were crazy when we started our work to save the High Line more than a decade ago. Then we held an ideas competition, and our favorite submission turned the High Line into a mile-long lap pool; another one put a roller coaster on the tracks. Train has the potential to serve as a potent symbol of the area’s industrial past.”

This is not the first time Koons’ Train has been considered for a public space. In 2005, the High Line Design Team and Koons studied the possibility of installing the sculpture at a future plaza at West 18th Street and 10th Avenue, but the sculpture was considered to be too large to be incorporated into the design at that time. Then later, following Michael Govan’s appointment as the Director of the Los Angeles County Museum of Art, LACMA initiated planning and engineering studies to install Train in conjunction with their expanded complex. There has been ongoing dialogue with the City of Los Angeles to move forward with the project, but both the museum and Koons have indicated their support for installing Train at the High Line regardless of the outcome in Los Angeles.

“The power and the dynamic of Train represents the ephemeral energy that runs through the city every day,” said Jeff Koons.

The sculpture itself would be a completely new fabrication, and it would accommodate all the features to ensure public safety. As part of their research for the project, Koons and LACMA have conducted an extensive feasibility study for the project, and the German fabricator Arnold is currently conducting additional engineering studies, cost estimates, and exploring methods of fabrication. Prior estimates have placed the cost of the art installation at $25 million.

“Our top priority is to build and open the rail yards section of the High Line. In order for this idea to become a reality, we would need to determine a way to safely integrate Train into the rail yards design, and find private support from a single funder to build it,” said Robert Hammond.

Like other recent major public art works in the city, such as Christo and Jeanne-Claude’s The Gates, and like the High Line itself, Koons’ Train has the potential to bring significant economic revenue to the City of New York that would far exceed the cost of construction. The Gates cost $21 million, but generated $254 million in estimated economic activity for the city, increasing restaurant business, hotel occupancy, attendance at cultural organizations, and foot traffic at local businesses and attractions.