Park update: The High Line will be closed between Gansevoort St. and 14th St. from 9:30pm to close on Wednesday, June 29. The southernmost access point will be 14th Street (elevator/stairs).

Story Behind the Shot: West Side Improvement Project 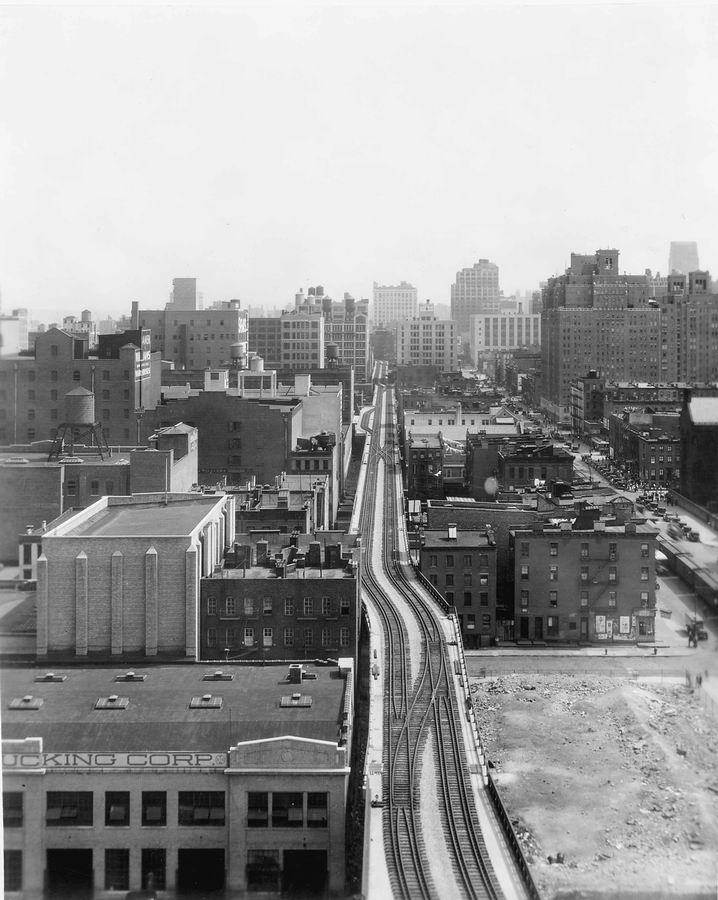 In celebration of our new 18-month High Line Calendar, we’re exploring each month’s featured image to bring you more of the behind-the-scenes details.

In 1934, the initial stage of the West Side Improvement Project was completed: a shining new elevated viaduct was unveiled, connecting New York Central Railroad’s freight line with Manhattan’s West Side. This great engineering achievement eliminated 105 street-level railroad crossings and allowed manufacturing and food processing buildings flanking the railway to connect directly with its train cars to load and unload freight.

At the southern terminus of the High Line was a new St. John’s Park Freight Terminal at Spring Street. This massive new building allowed for 150 standing train cars, a leap ahead to support increasing manufacturing demands on the neighborhood’s businesses.

This month’s photo, at right, appeared in a 1934 promotional brochure detailing the West Side Improvement Project. Looking north along the new – and to-date unused – tracks of the High Line, anticipation was building for the debut of the new elevated railways. New York Central Railroad wrote about the project in their brochure:

“With the dedication, June 28, 1934, of the new St. John’s Park Freight Terminal of the New York Central Railroad Company, New York City comes within sight of the consummation of the West Side Improvement, one of the greatest projects ever undertaken jointly by the public and private interests on Manhattan Island. The completion . . . will bring about a new era for the industrial West Side.”

Below we’ve pulled out a few interesting details of the photo for closer examination. 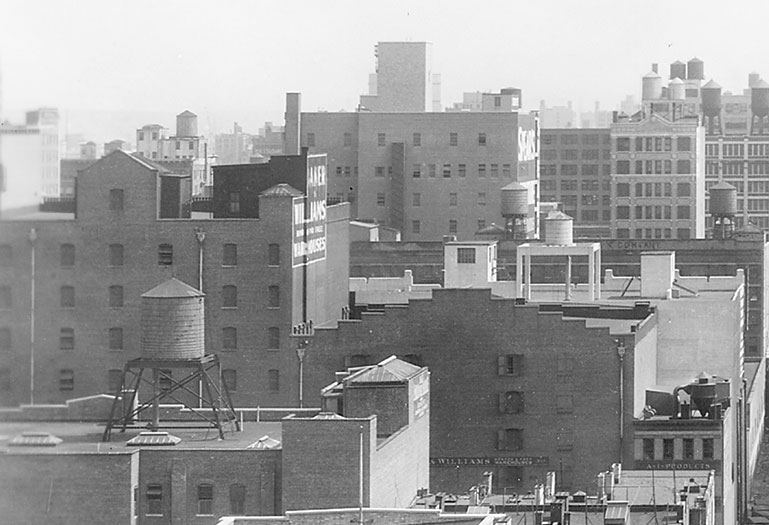 The Baker and Williams Warehouses are the dark brick buildings in the center of this photo. These massive warehouses along West 20th Street would later act as short-term storage for uranium concentrates for the Manhattan Project in the early 1940s. In the 1980s and 1990s, the remaining radioactive waste was removed and the buildings were cleaned. They are now home to many Chelsea art galleries and the current offices of Friends of the High Line. 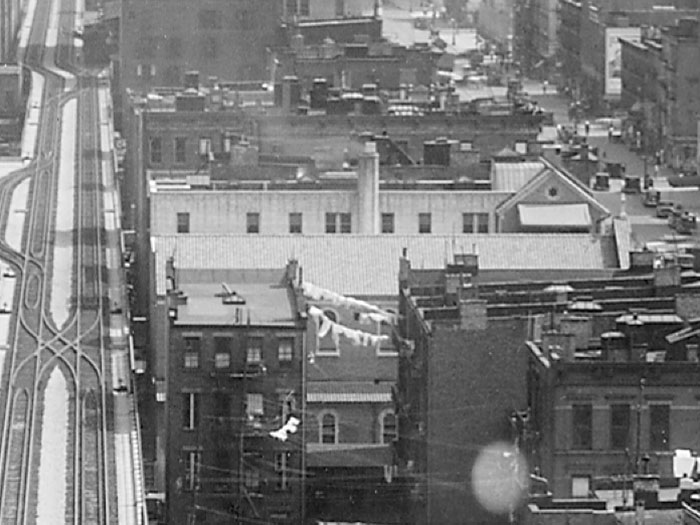 In the center of this detail is the Church of the Guardian Angel. The parish of this Roman Catholic Church was founded in 1888, to minister to the workmen who labored at the West Side’s waterfront. The building that stands in this photo – and that still stands today – was new at the time. The older building that housed the church was forced to move when the elevated railway was constructed. While the style of this building, designed by John Van Pelt of Van Pelt, Hardy & Goubert, stands in stark contrast to the High Line, both were constructed around the same time. 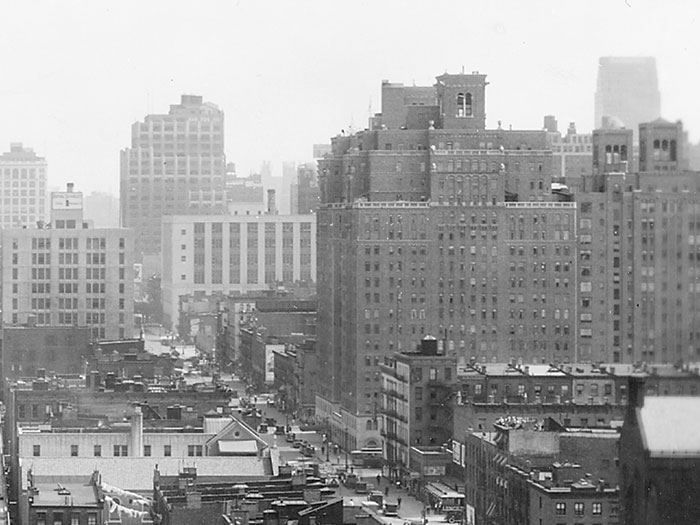 On the right hand side of this photo is London Terrace, a huge residential complex completed in 1930 that spans a full block between West 23rd and 24th Streets and 9th and 10th Avenues. At the time, London Terrace was the largest apartment complex in the world, with approximately 1,700 apartment units. 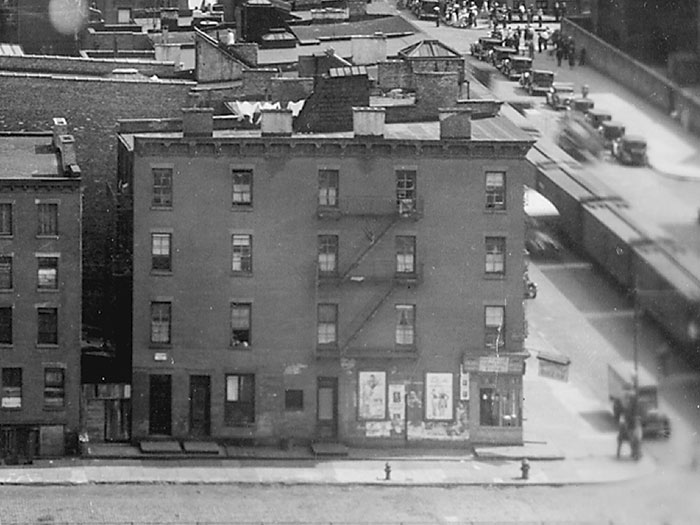 It’s easy to almost miss the train steaming by on the edge of this photo, but this little detail acts as a timestamp. At the time the photo was taken in late 1933 or early 1934, freight trains were still running down “Death Avenue.” Later, in 1934, the High Line would open to freight traffic and trains would no longer run down 10th Avenue, marking an end of an 80-year era.

A lot has changed in Chelsea, but some of the neighborhood’s historic buildings are still going strong, or have taken on a new life. Below are a few recent photographs of the same area: 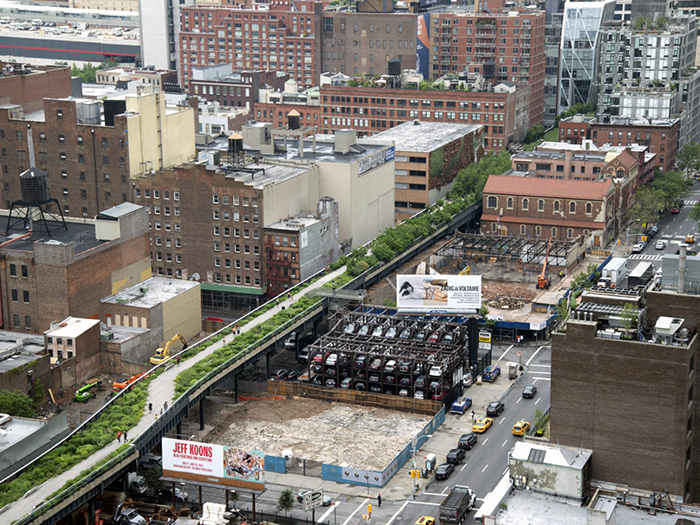 Looking north from West 18th Street, the Baker and Williams Warehouses and the Church of the Guardian Angel are visible.Timothy Schenck 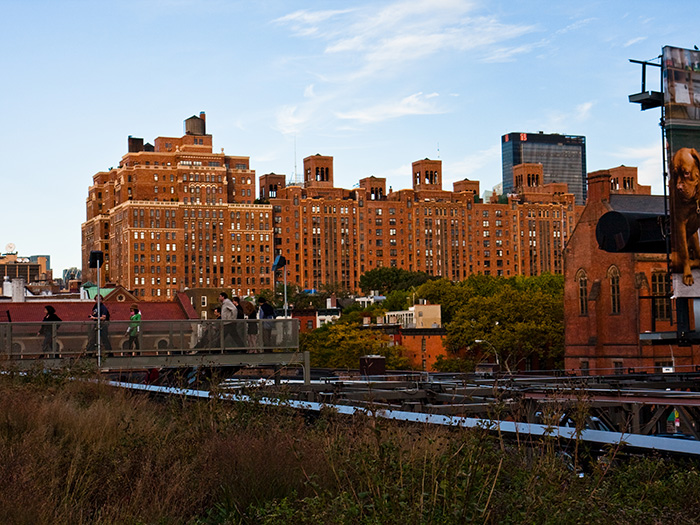 Purchase our 18-month High Line Calendar for this and many more beautiful photos of the High Line through four seasons. Or, for a limited time, members who join or renew at the Rail level will receive our beautiful new calendar as a special thank-you gift. Join or renew today. 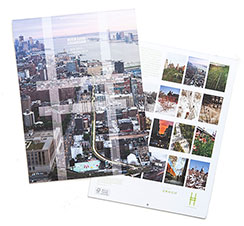