When you join the High Line as a member today, your gift will be matched dollar for dollar, up to $15,000. 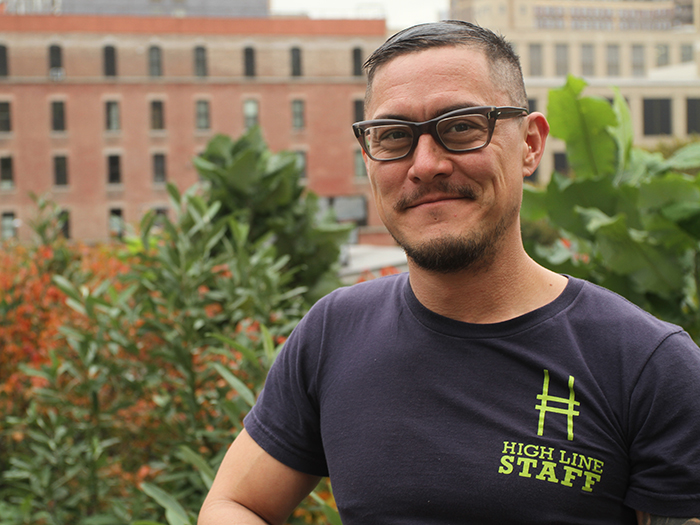 Photo by Friends of the High Line

“Sometimes you forget you’re 30 feet in the air. It’s kind of magical.” This is how Johnny Linville spoke of how he experienced the High Line when he began working here as a gardener in 2009. Five years later, Johnny’s sense of magic in the park was as strong as ever. It is with a heavy sense of loss that we announce his passing on August 1, 2014.

Johnny was one of the first gardeners hired to the horticulture staff when the park opened, and over the years his passion for horticulture and the High Line only grew stronger. His dedication and leadership in devising best practices to care for the gardens earned him promotions to Horticulture Foreman and, later, Manager of Horticulture, and the legacies he’s left us from each era of his time at the High Line are innumerable.

As a gardener, Johnny was inquisitive and eager to explore. He worked closely with High Line planting designer Piet Oudolf to understand his design philosophy and plant choices. Johnny had an innate sense of what plants would be successful on the High Line, and his choices were both beautiful and fitting. Johnny worked tirelessly with the High Line’s design team to source plants for the second and third sections of the High Line, and he was instrumental in coordinating the planting of the tens of thousands of plants that make up the newer landscapes of the High Line.

In addition to his contributions to the horticulture on the High Line, Johnny relished cultivating relationships with many of the individuals and organizations that make the High Line community so vibrant. Johnny worked with public schools in the Chelsea neighborhood to build and renovate their gardens. He participated as a judge in the New York City Housing Authority’s annual garden competition. He coordinated donations of plants to community gardens and neighboring business improvement districts. He trained dozens of volunteers to help with the High Line’s annual Spring Cutback and fostered relationships with our corporate partners through their volunteer work in the park. Johnny touched the lives of so many friends of the High Line, including all of us who were so fortunate to work with him.

Johnny, without your contributions, the High Line could not be the extraordinary park in the sky that it is today. Thank you for your passion, dedication, and leadership during your years with us. You will be deeply missed.

Below, a few of Johnny’s coworkers at Friends of the High Line share their thoughts and memories.

“He used to have this little bonsai on his desk at our old offices, and when people asked about it he delighted in talking about it. He gave it such good care in watering it frequently and even getting a mister for humidity during the winter. Johnny had an intense passion for the plants and the care on the High Line, and he had an enthusiasm in sharing every bit of it with everyone. He linked many people and organizations together. He was a real ambassador for horticulture on the High Line.” —Tom Smarr, Director of Horticulture

“So many of us are scared to be different and show how much we care. Johnny had the bravery to do both.” —Robert Hammond, Co-Founder

“Johnny’s honesty was special. He wore his heart on his sleeve in a good way. He was never shy to show how much he cared about the park and his colleagues. We’ll miss his friendly smile and infectious laugh.” —Martin Nembhard, Vice President of Park Operations

“I am very lucky to have gotten the opportunity to work with Johnny during the park’s formative years. Johnny was fun. He demonstrated an intense commitment to his work. He was thoughtful. He delved into the nitty-gritty details. He worked and re-worked systems. He expected excellence of himself and of others. He cared deeply about making this park in the sky function well and serve as a singular experience for park visitors. We loved him and miss him but know that he will continue to live on in all that he did for the High Line.” —Jenny Staley, Director of Facilities Planning and Management

“Since the day I met him, Johnny was like an older brother to me, with a rare kind of warmth and energy. If I wasn’t happy, he wasn’t satisfied with just getting a smile – he wanted a laugh. Once, after a conversation about a mutually appreciated television show, he decided he would begin injecting our office with the Seinfeld theme song during inopportune moments. These were always timed during the quietest possible times – a dark, quiet, cold Wednesday evening in December, or an impossibly early Monday morning. No matter what kind of mood I was in, he made it better. Johnny was the best kind of coworker. He could do what he needed to do while making you feel like a friend and confidante. The High Line is what it is because of his enthusiasm, passion, and love, and it will always remind me of one of the best people I’ve ever known.” —Salmaan Khan, Manager of Facilities Planning

“Johnny played an integral role in overseeing the installation and planting of Section 3 landscape. Over the last year, he developed great relationships with the construction team and worked closely with landscape contractors, irrigation installers, growers, nurseries, and the designers. Johnny worked tirelessly to ensure that the new Section 3 landscape – from the installation of the green-roof layers and the engineered soil, to the planting of the hundreds of trees, shrubs, and perennials – will thrive on the High Line.” —Louise Eddleston Lewis, Director of Capital Projects

“Johnny was always so enthusiastic and supportive of any strange thing we and the artists came up with. It was just so great to talk to him: he was curious about everything and I was always so surprised to find out he liked to go and see shows in Chelsea and enjoyed talking about art. Every time we approached him with some bizarre art questions, he was always so supportive and generous in sharing his expertise and his time. He was graceful, but always enthusiastic and passionate – a great team player. We were so lucky to work with him and to have him as a neighbor at the office. During the installation of Adrián Villar Rojas’s sculptures at the Rail Yards – a place Johnny really loved – the artist and his team loved talking to him: he gave them suggestions on which seeds to use and liked to spend time with them. We’ll miss him so much and for all of us the memory of that place will be forever attached to him.” —Cecilia Alemani, Donald R. Mullen, Jr Curator and Director of High Line Art