Celebrating the Opening of the High Line at the Rail Yards

The opening of the High Line at the Rail Yards was a thrilling moment – the culmination of more than 15 years of advocacy. Visitors have gained another half-mile of park to enjoy, and are now able to walk the full mile-and-a-half of this historic railway. 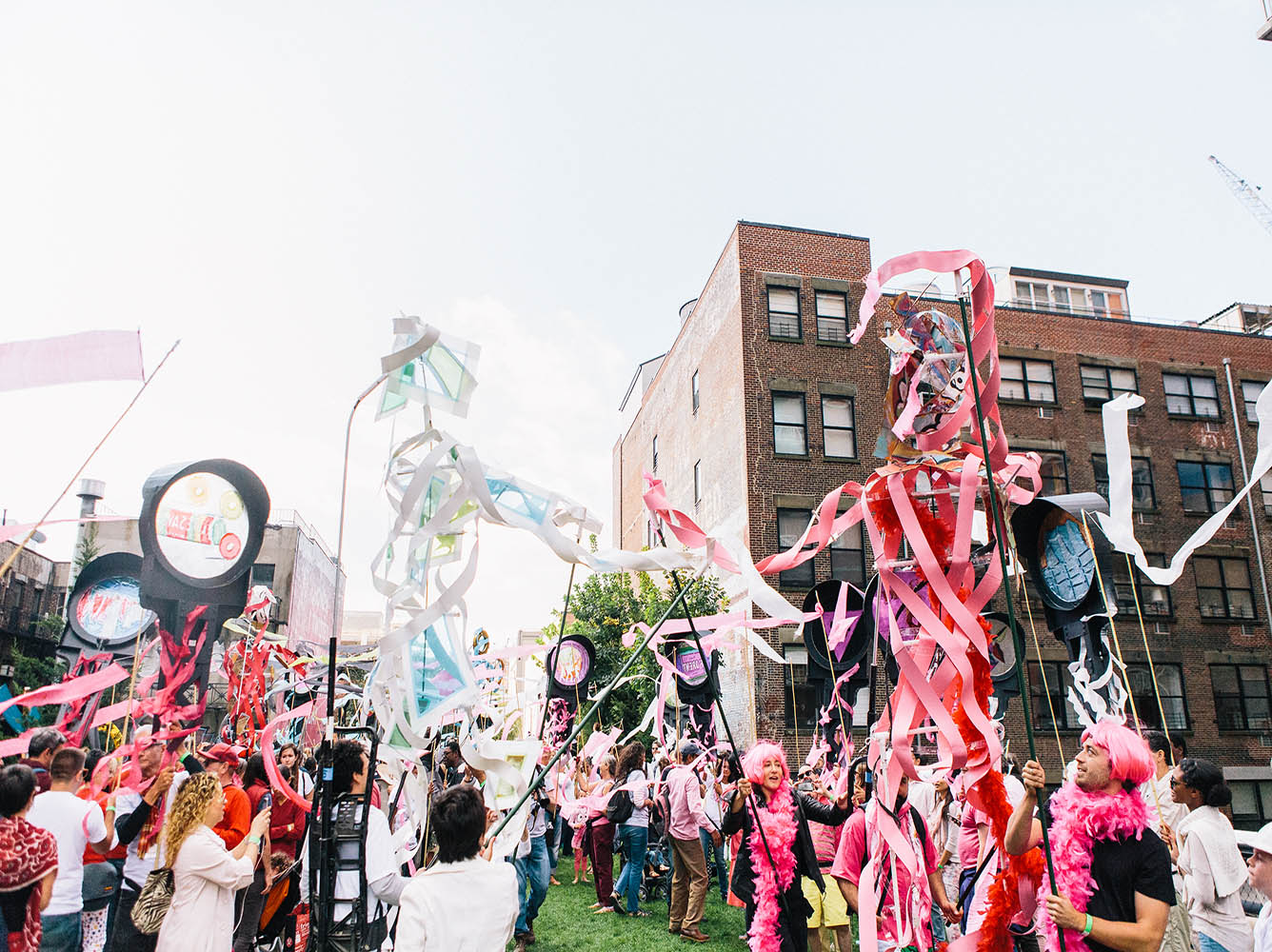 To celebrate the opening of the Rail Yards, we invited more than 500 of our neighbors to participate in a procession along the length of the High Line. Marchers carried 174 streamers, 30 “lollipops,” and six puppets – two of which are pictured “greeting” each other above.Rowa Lee 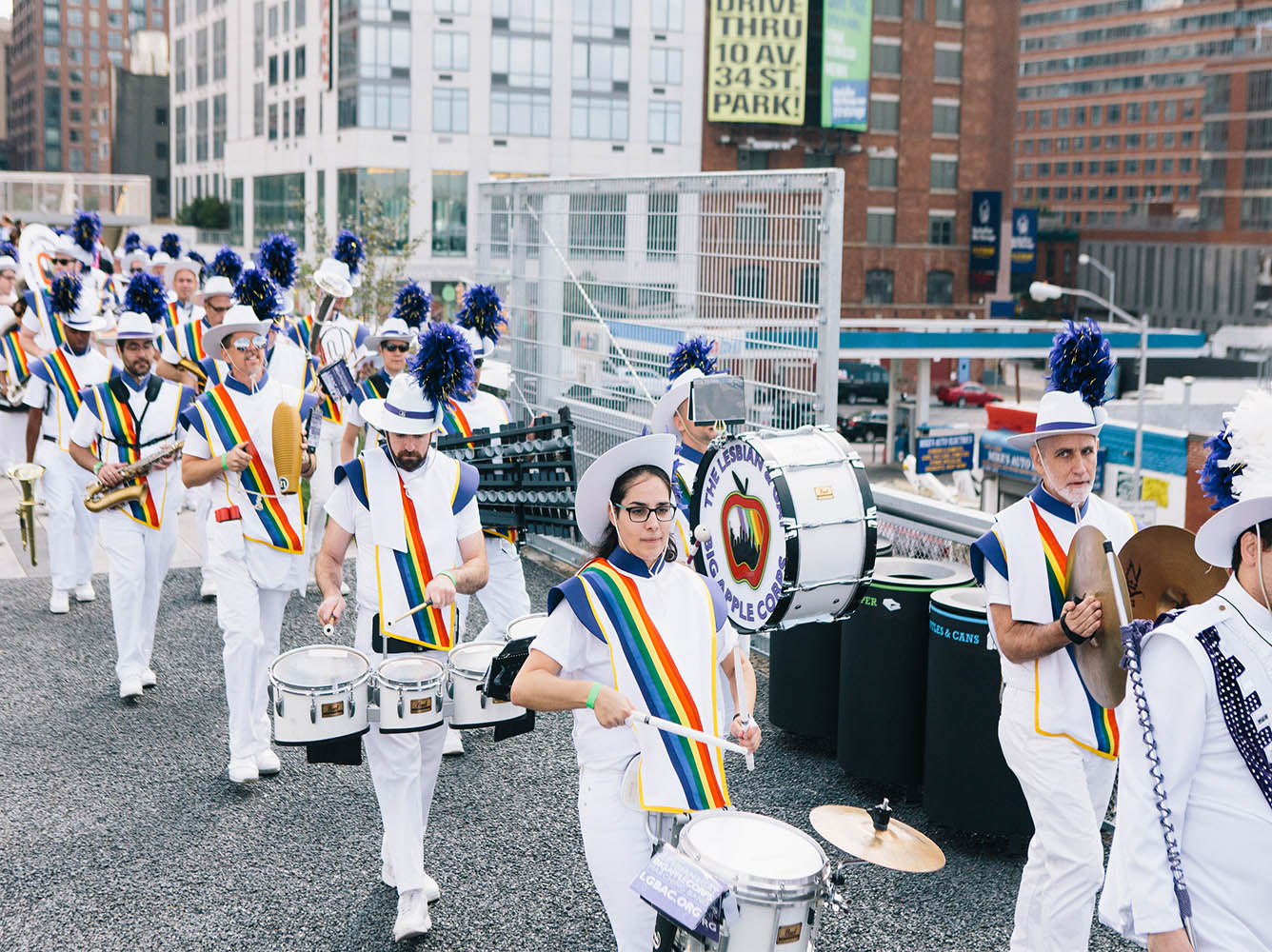 NYC’s Lesbian and Gay Big Apple Corps helped to energize the marchers during the procession.Rowa Lee 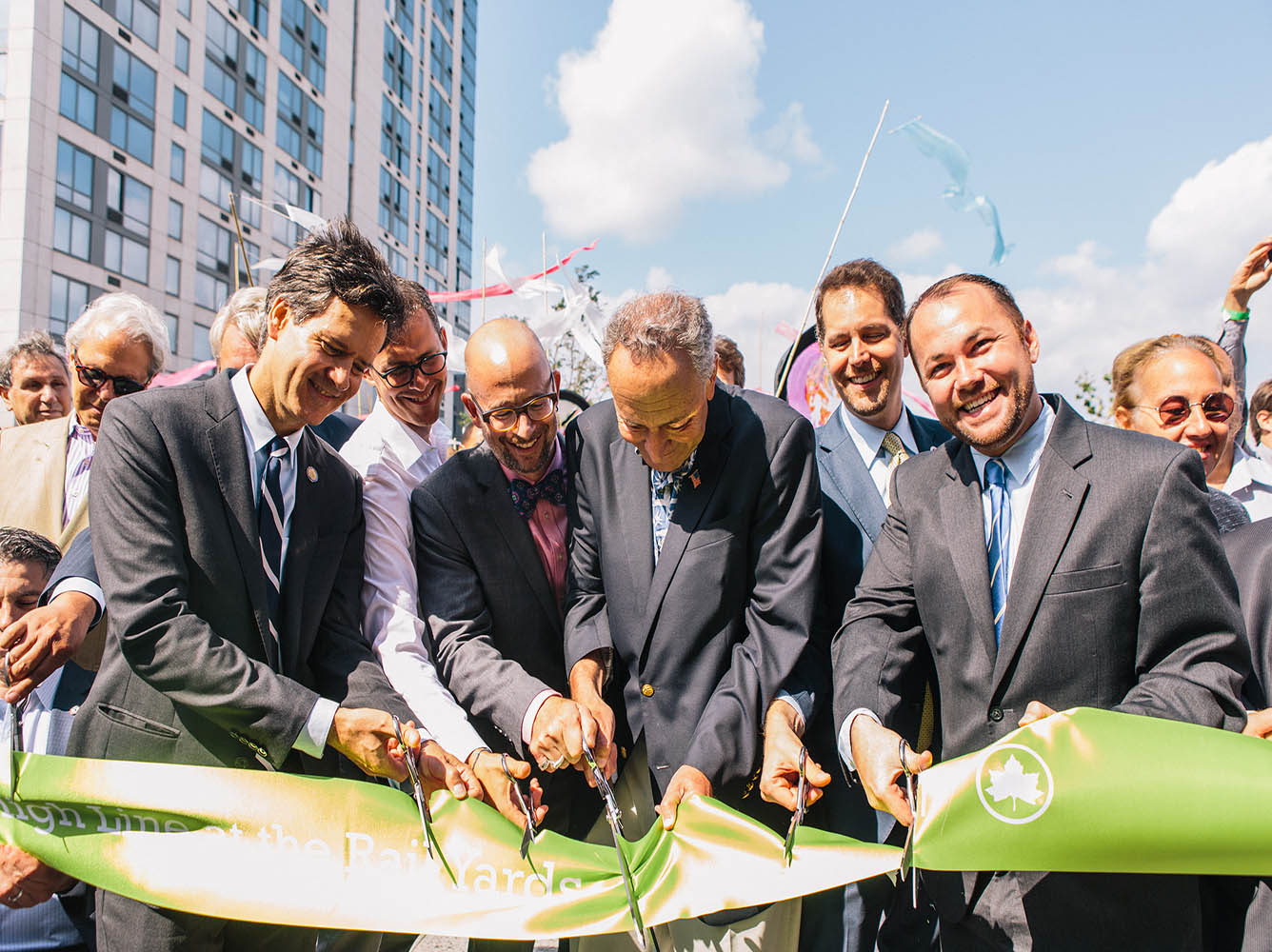 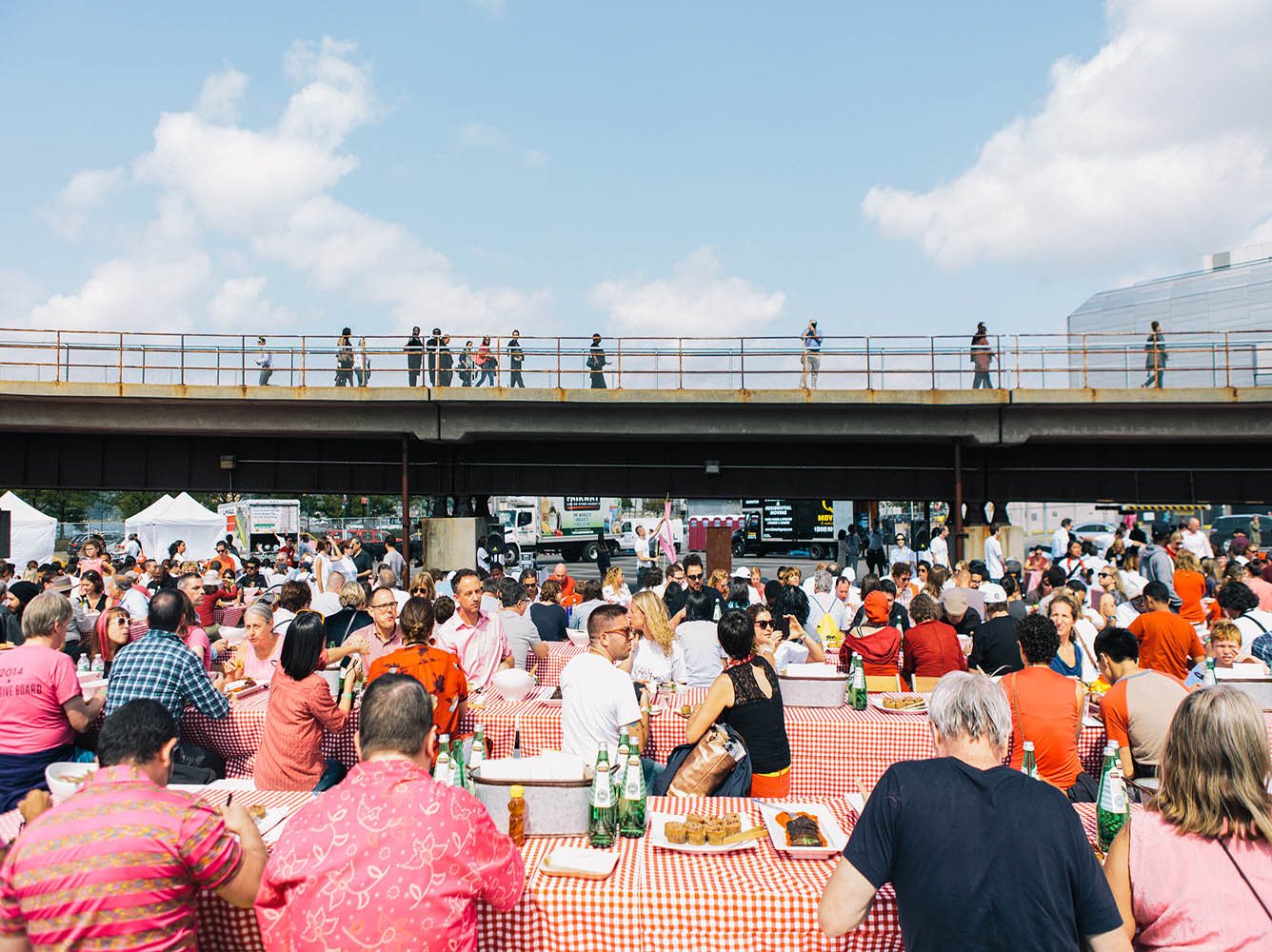 After all that walking, hungry procession participants were treated to a delicious communal meal at 34th Street.Rowa Lee 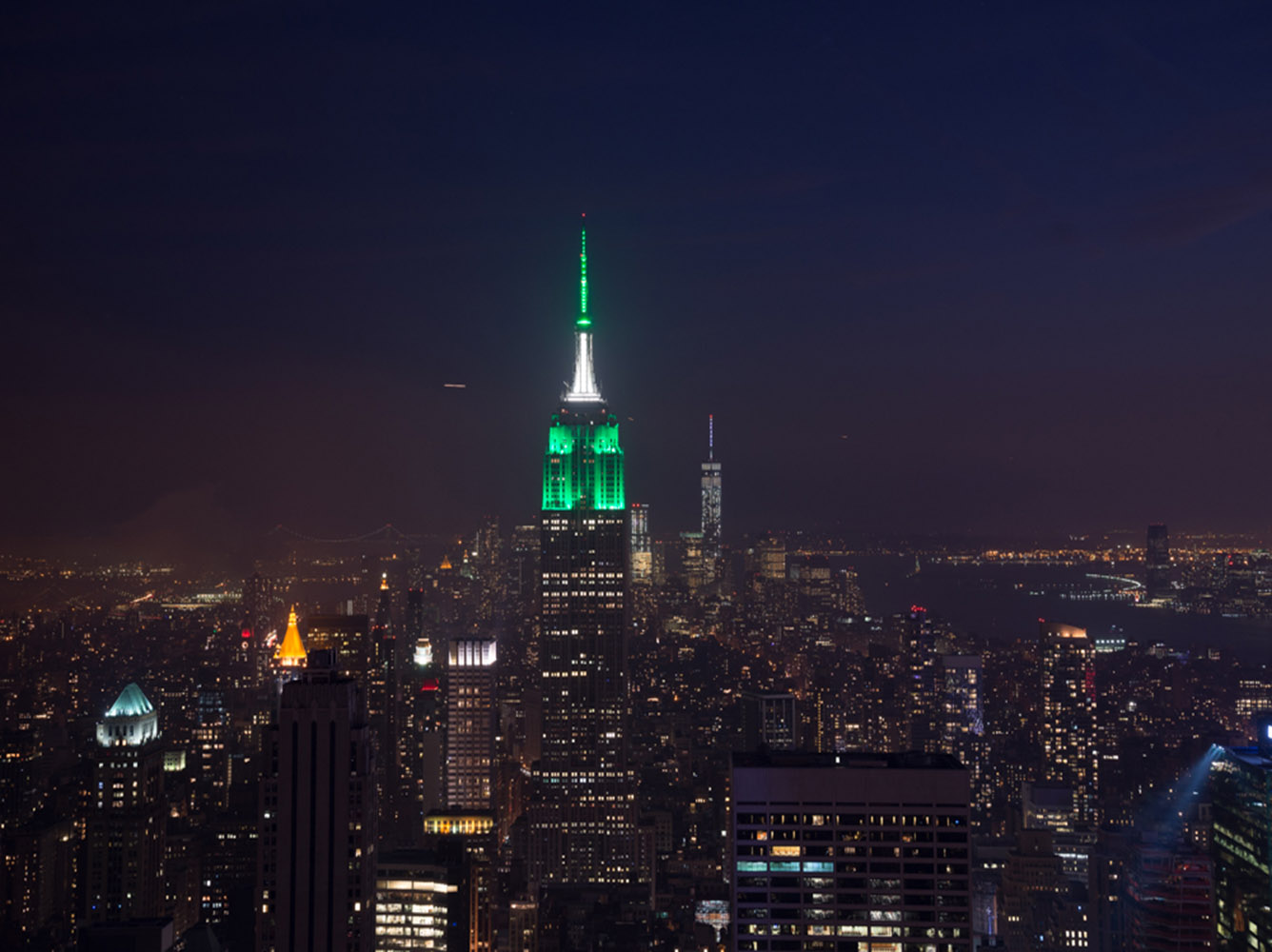 On the evening of September 21, the Empire State Building glowed green in celebration of the opening of the High Line at the Rail Yards.Timothy Schenck 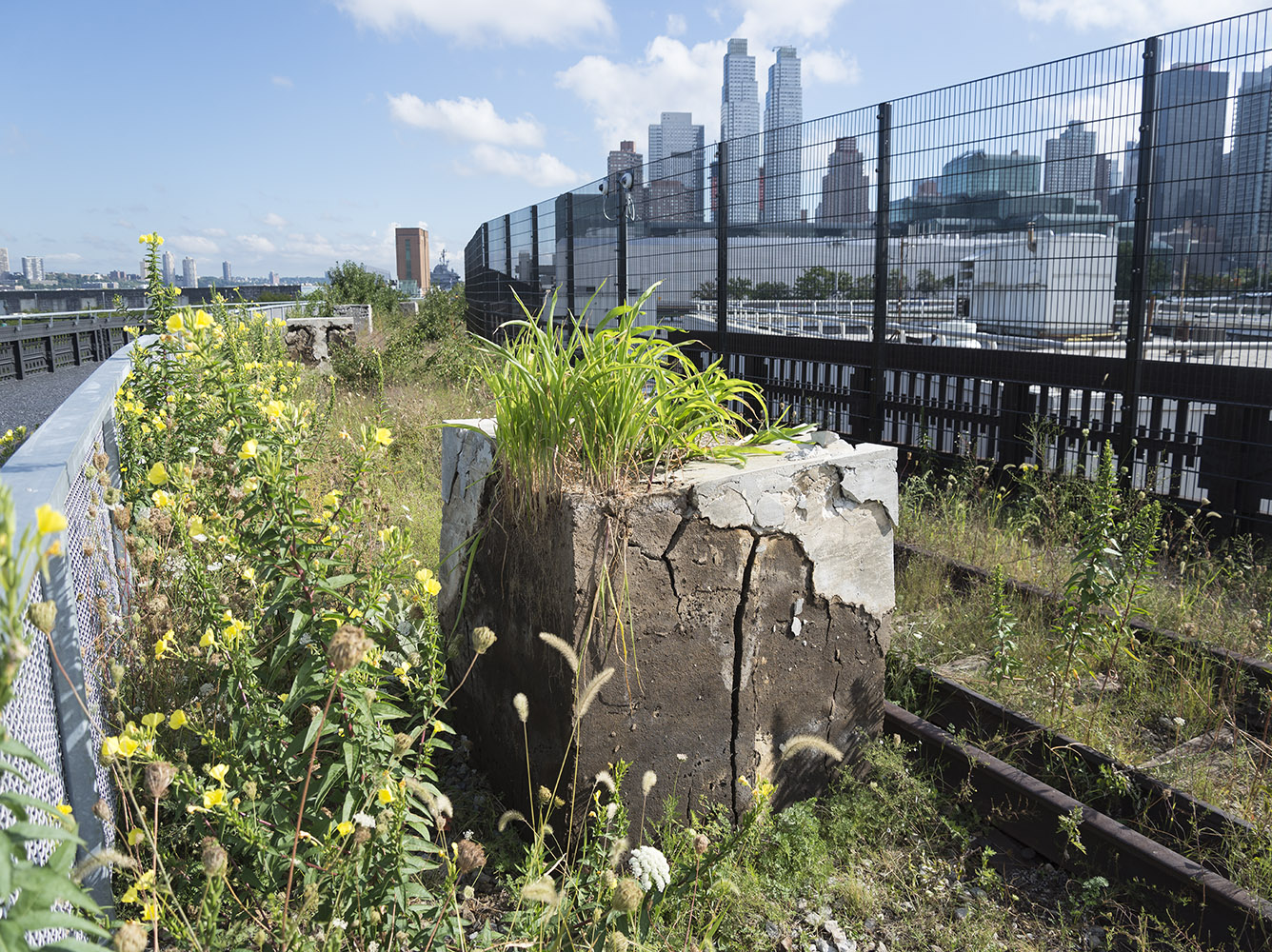 Installed in the Rail Yards’ Interim Walkway is a new High Line Art commission – a series of abstract sculptures by artist Adrián Villar Rojas. The sculptures themselves are composed partly with seeds, vegetables, and compost from the High Line. Over the course of the yearlong installation, Rojas’s seemingly sturdy sculptures will crumble and sprout new growth, gradually taking on a greater resemblance to the surrounding landscape.Timothy Schenck 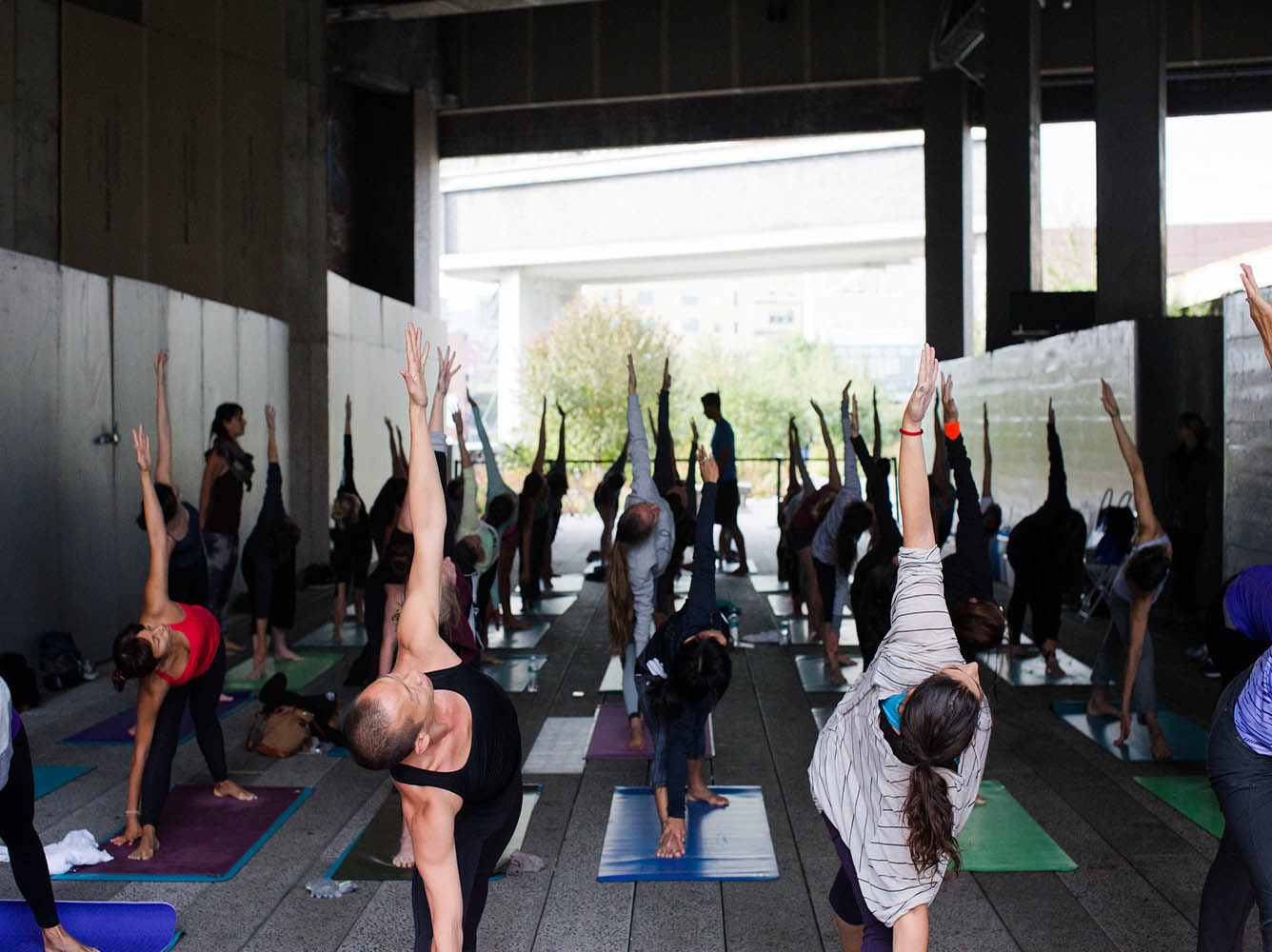 To celebrate the opening of the Rail Yards, we held a week of special programs. From September 22 through 28, we offered more than 30 free activities, including wellness classes, lunchtime concerts, tours, storytelling, and much more.Liz Ligon 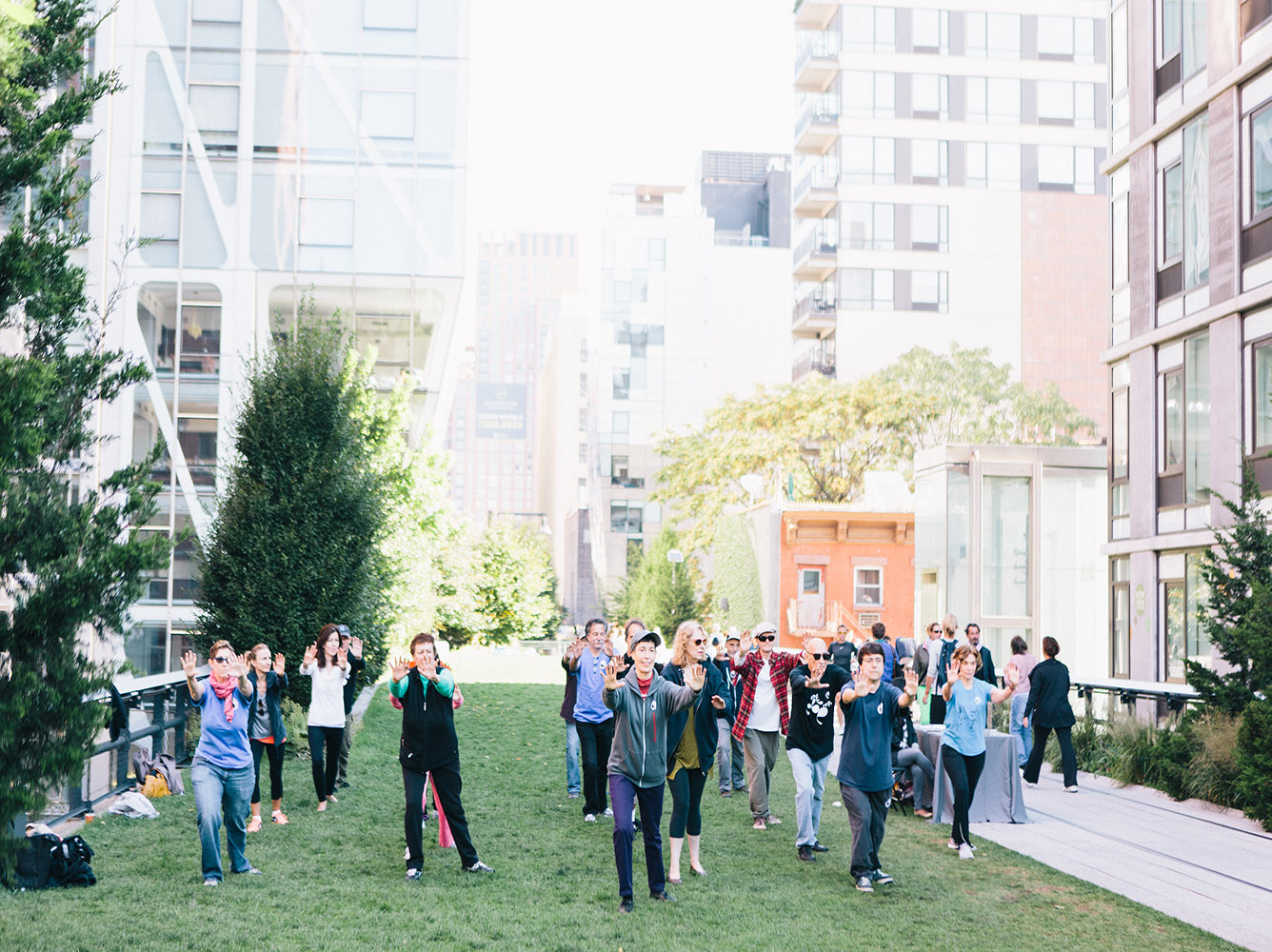 In addition to yoga, we hosted tai chi lessons and guided meditation sessions throughout the week. Here, an instructor from the neighboring Taoist Tai Chi Society teaches participants this ancient form of exercise on the 23rd Street Lawn.Rowa Lee 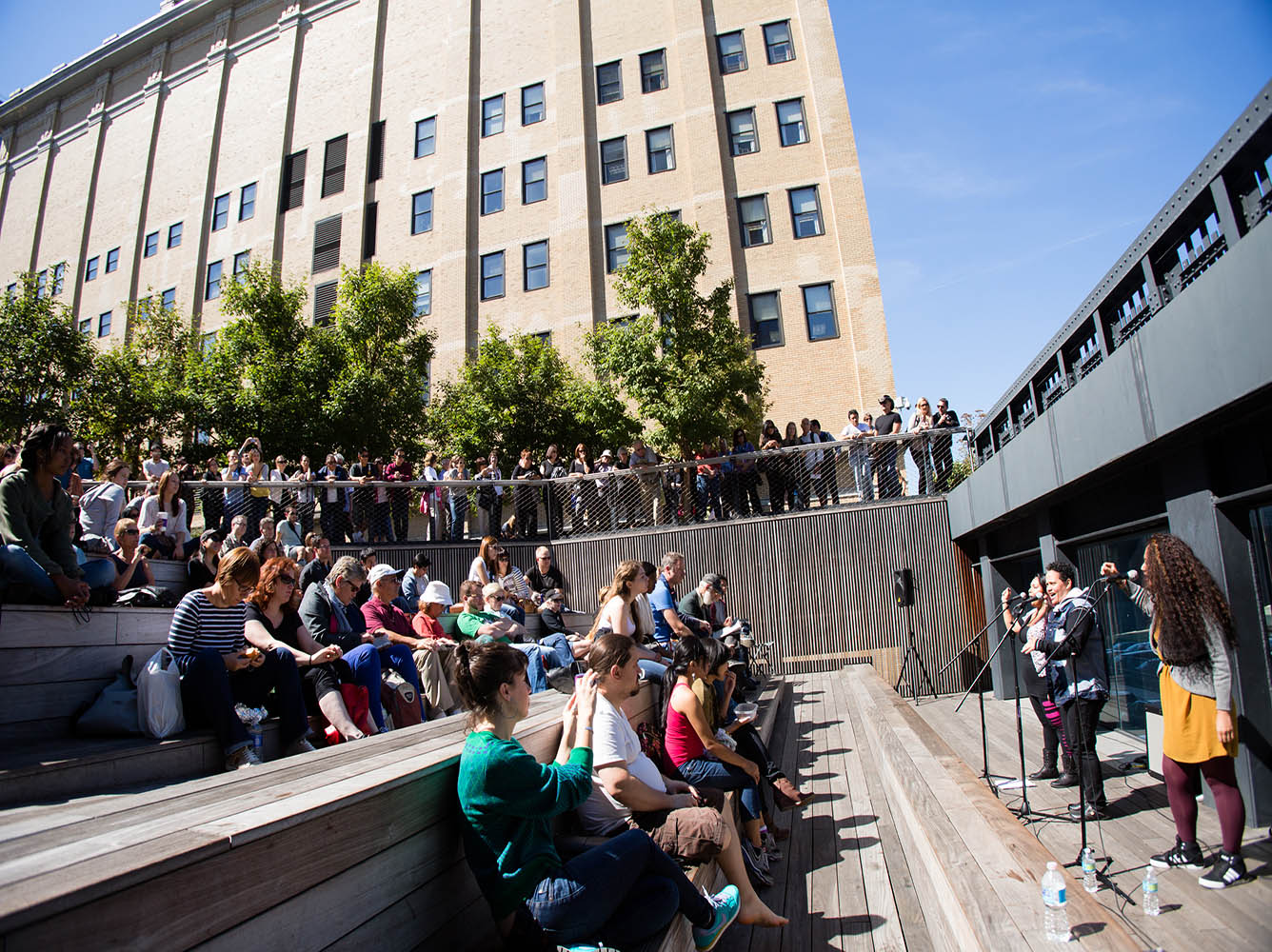 Each afternoon, a different musical group held a free concert in the 10th Avenue Square. Here’s Mahina Movement bringing their signature mix of folk, rock, and rhymes to a large lunchtime crowd.Liz Ligon 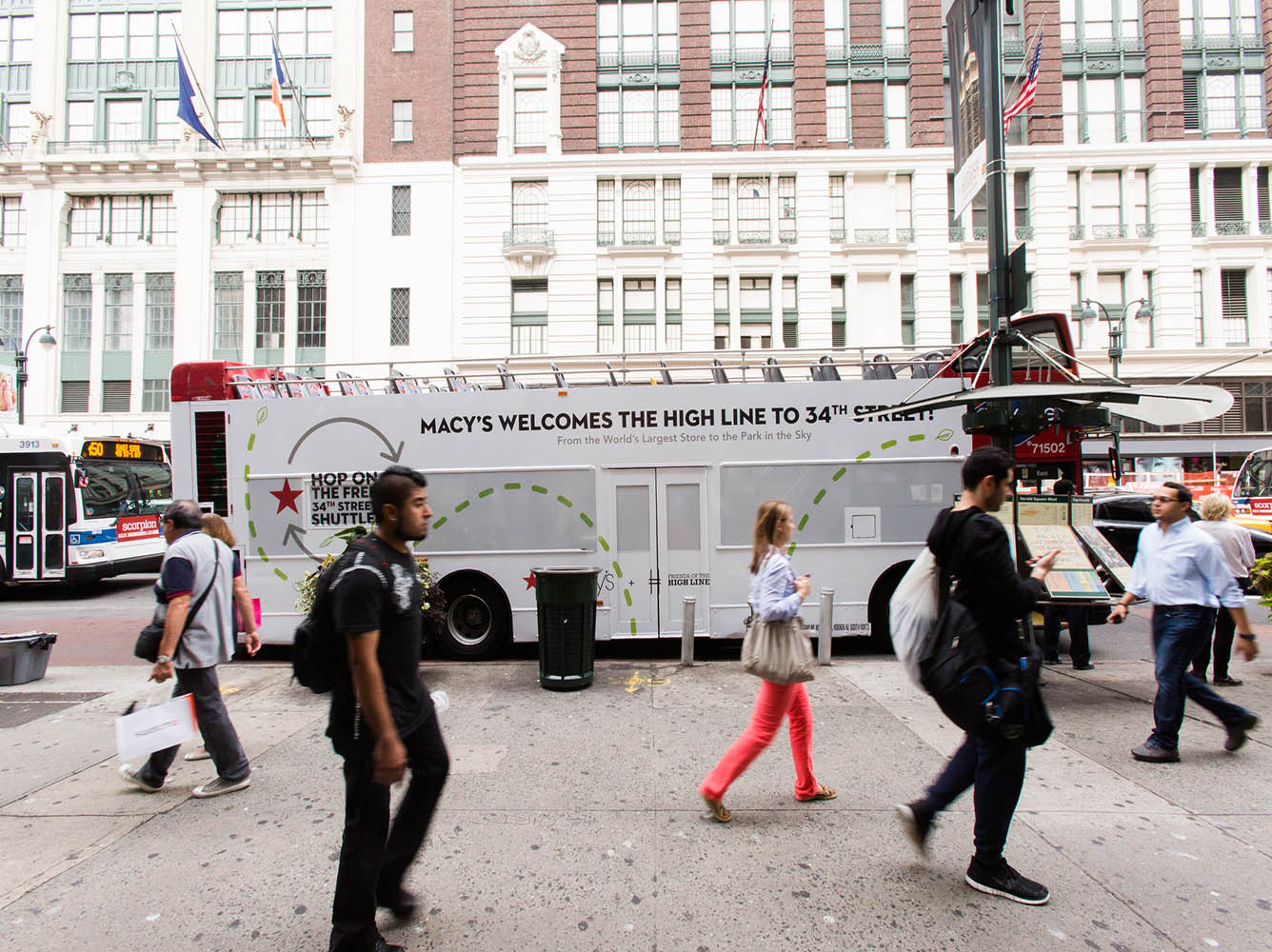 Macy’s ran a free bus shuttle between Herald Square and the High Line’s 34th Street entrance on the weekends of September 20 and 27.Liz Ligon 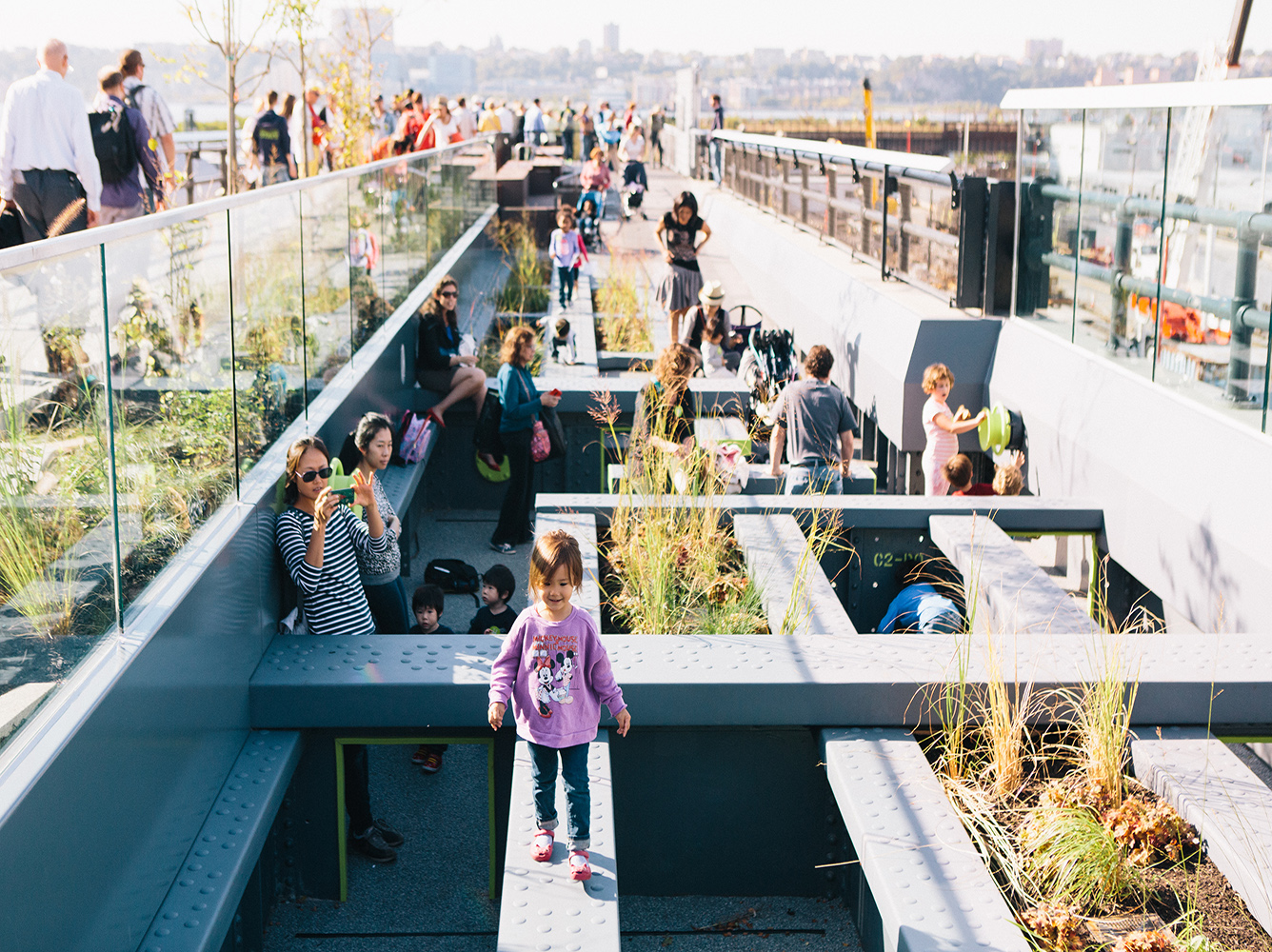 Our youngest visitors were treated to a series of after-school programs each day. Here, children play in the Pershing Square Beams, one of the new features at the Rail Yards. The sunken area – coated in silicone for safety – offers a rotating beam, periscopes, a gopher hole, and talking and viewing tubes.Rowa Lee 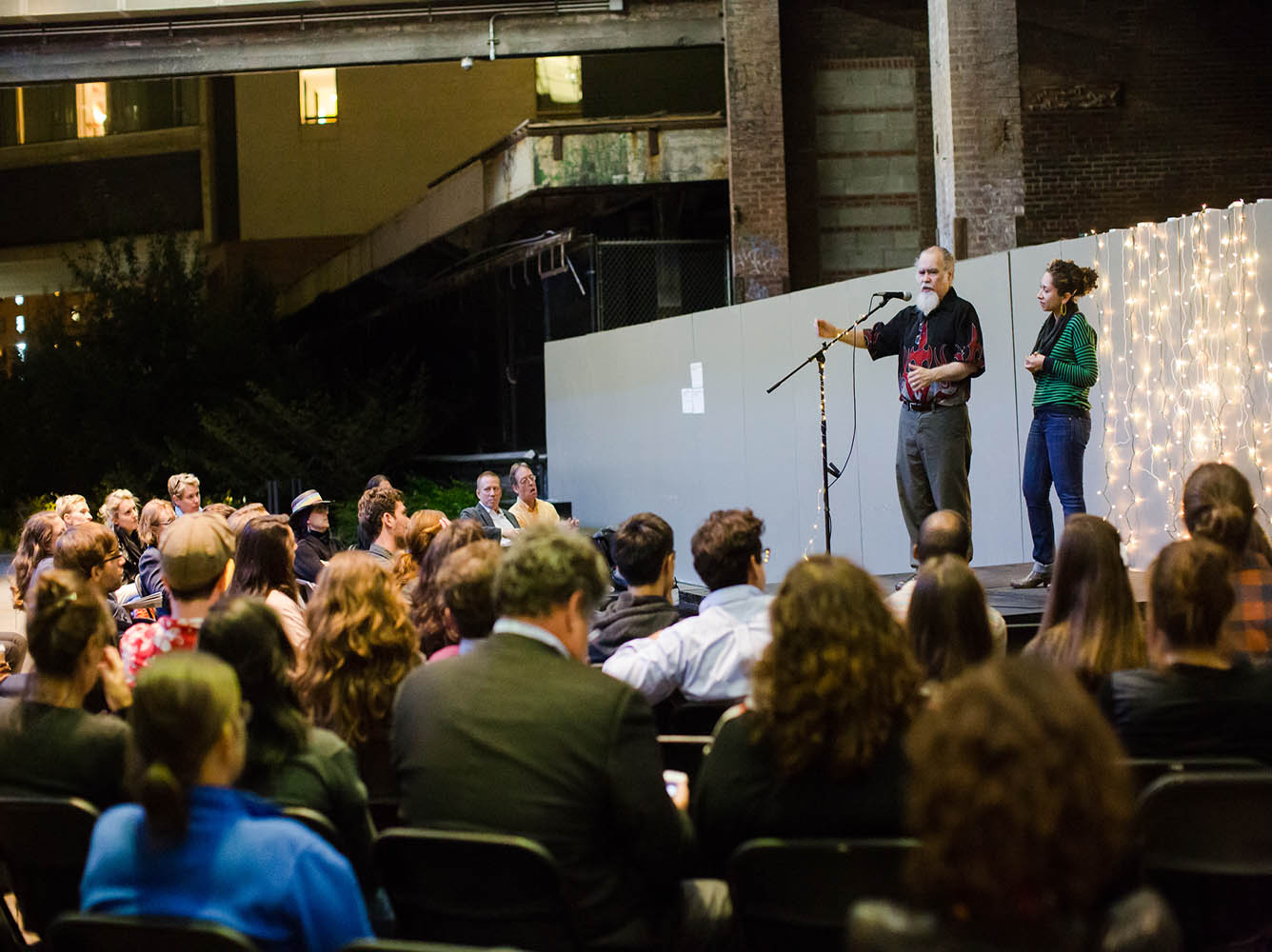 At our first Neighborhood Narratives event, local legends – including photographer Efrain Gonzalez, WNYC reporter Jim O’Grady, and writer Michele Carlo – regaled audience members with recollections of living on the West Side in the 1970s and 80s.Liz Ligon 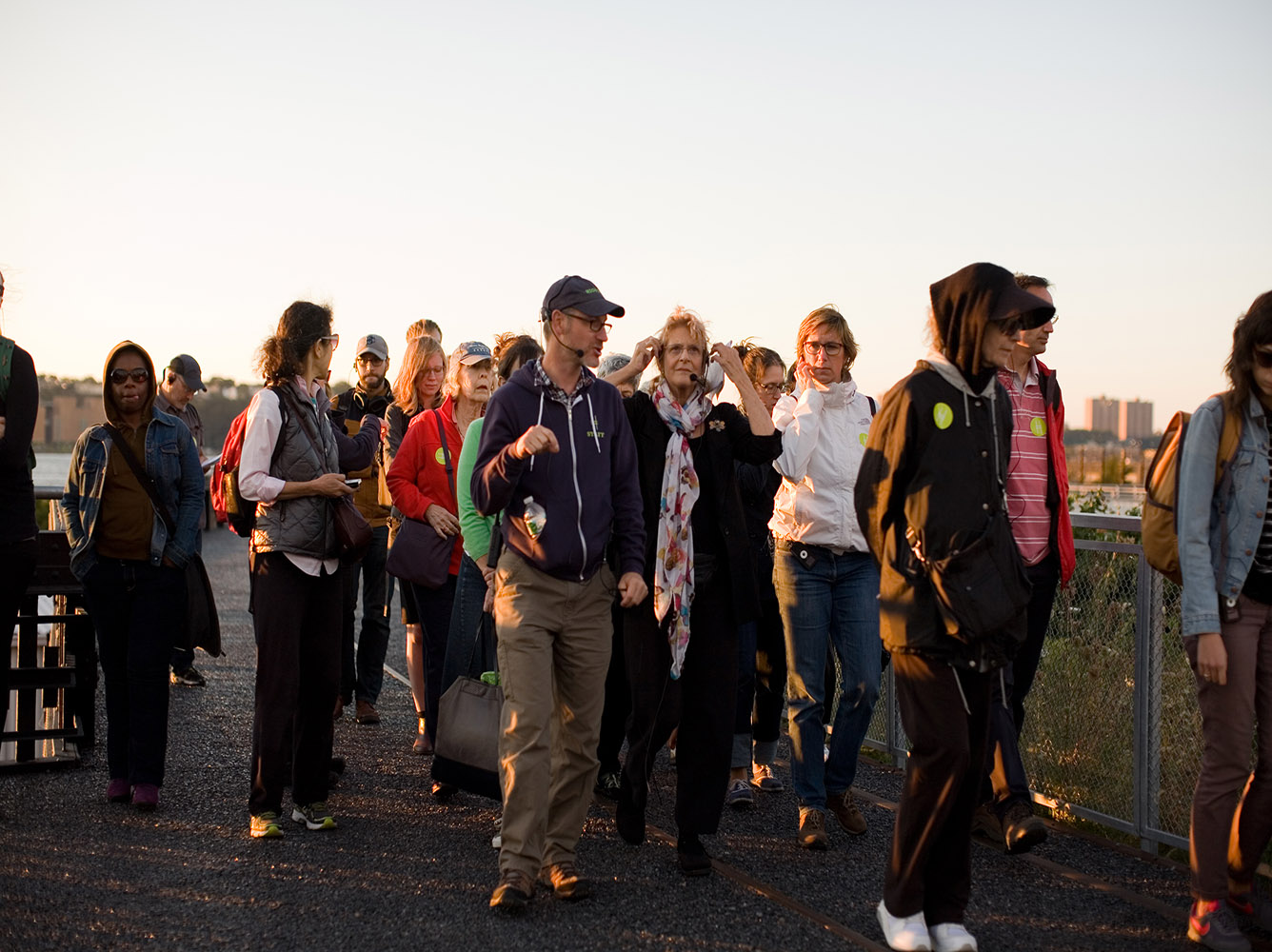 We introduced a new type of program, Walk & Talk, that combines the best of a walking tour and panel discussion. Two speakers tackled topics ranging from food policy to the West Side’s evolution as they led small groups. Here, Director of Horticulture Tom Smarr and author Leslie Day discuss urban plant life in the wildscape of the Interim Walkway.Joan Garvin 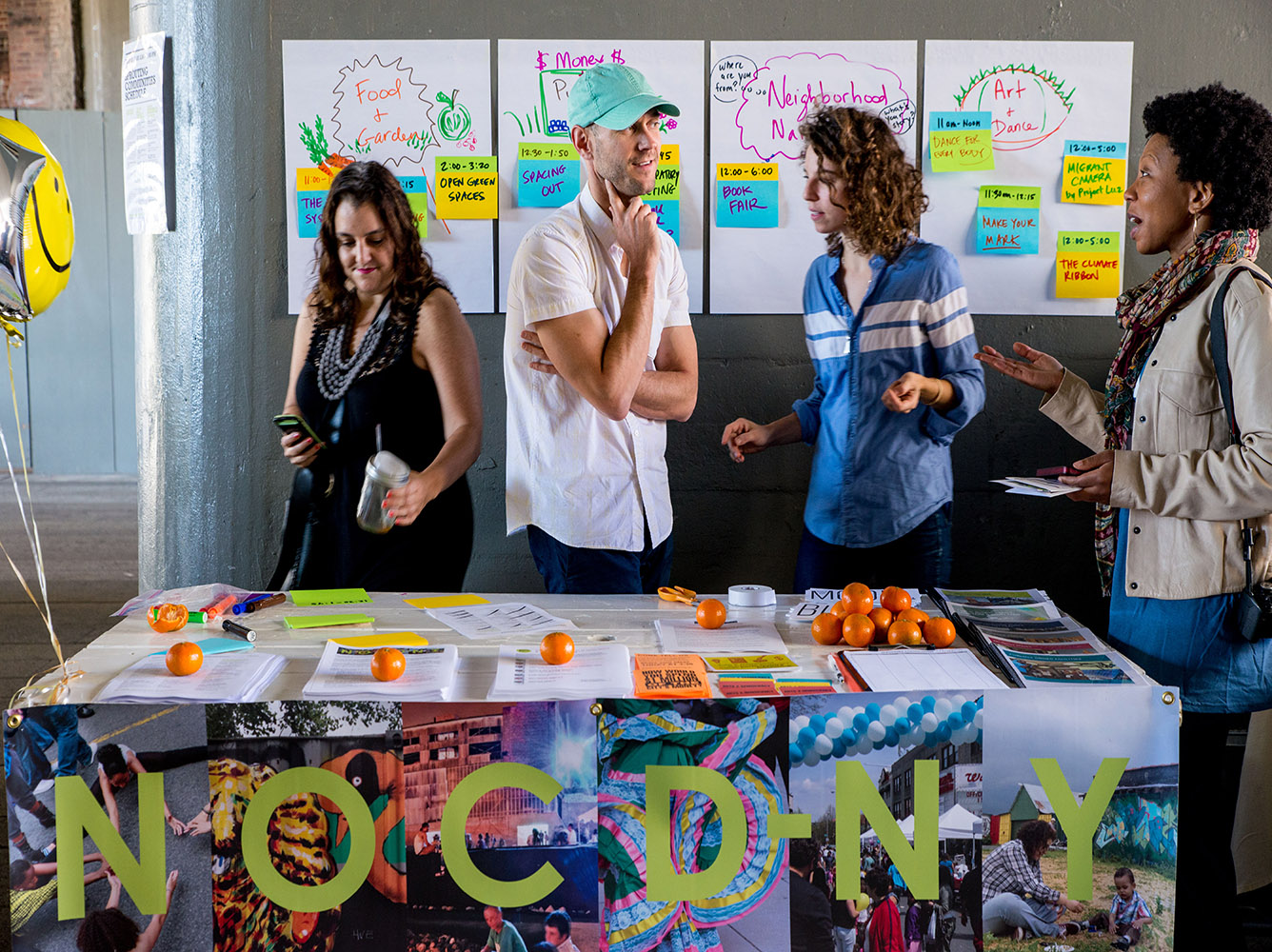 The Sprouting Communities program featured a day of action-oriented, community-led workshops on a variety of topics, from starting a community garden to the basics of zoning.Anita Ng 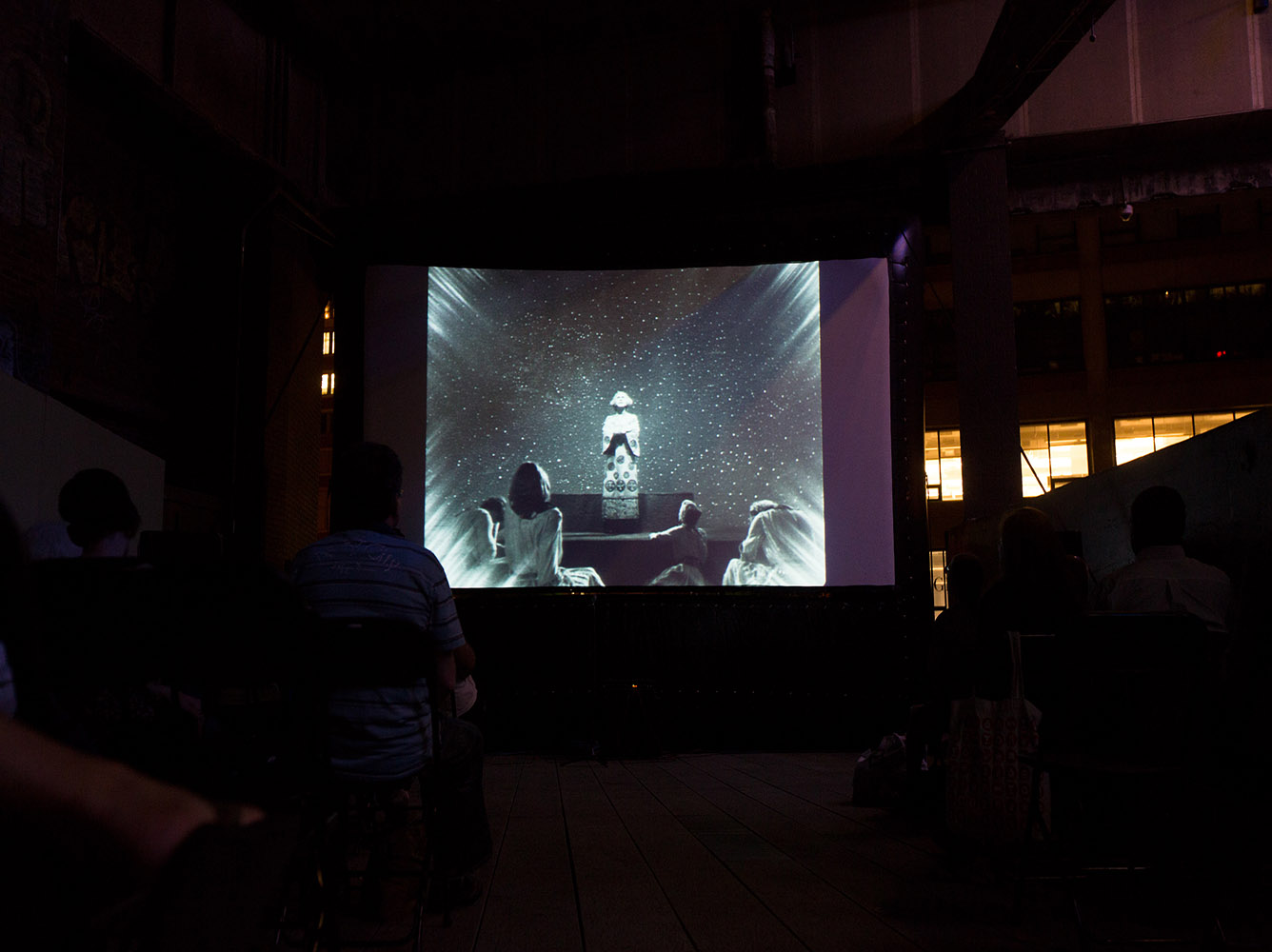 Opening Week activities were generously sponsored by
CSX Transportation. The Macy’s 34th Street Shuttle provided free bus service along 34th Street – between the High Line at the Rail Yards and Macy’s Herald Square – on the weekends of September 20 to 21 and 27 to 28.