Photo Essay: Under the High Line 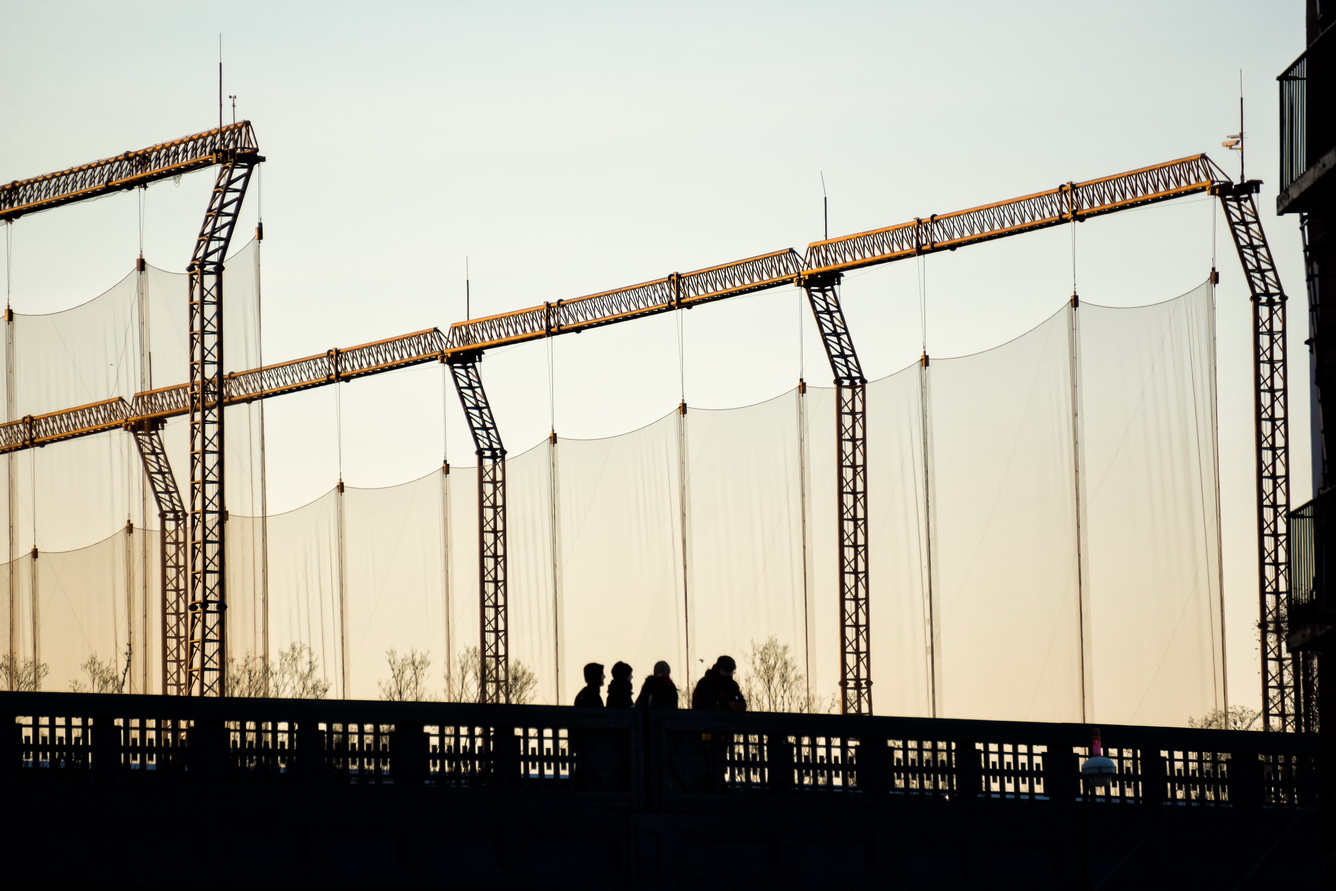 As a staff member of Friends of the High Line, I feel like I’m often focused solely on what’s going on in the park: plants, food, visitors, public programs, etc. But the most exciting and interesting feature of the structure itself is arguably its elevated nature. This elevation creates not only an engaging public space that interacts with the city 30 feet above the ground, it also creates street-level interactions with the roadways and businesses along and underneath the former railway. It’s for this reason that I was so thrilled to hear that High Line Photographer Mike Tschappat was undertaking a personal photo project focused on perspectives beneath the High Line.

Mike Tschappat is a prolific photographer who turns his lens to beautiful landscapes across the tri-state area, including natural forests, city skylines, and of course, the High Line. For this project, Mike spent 10 months with his tripod and camera in hand, roaming the neighborhood around the High Line. What I love most about the resulting collection of photos – of which we’re only featuring a small number here – is the sheer variety of perspectives and subjects. Some shots peer up at visitors of the High Line from a distance, their tiny silhouettes acting as a measure against which the scale of the city and the High Line can be better understood. Others put the neighboring buildings, streets, people, and street-level character on center stage, leaving the High Line as a backdrop. In many photos the steely weight and presence of the railway is apparent – a nice contrast to the lighter contemporary feel of the gardens and walkway topside.

Below Mike talks about the project in his own words.

As the High Line marches down Manhattan’s lower West Side, it leaves footprints on the communities, the businesses, and the landscapes that lie beneath. Its girders, packed by rivets, reveal a stalwart geometry to street dwellers who think to look up. Its massive legs protrude into buildings, becoming part of the architecture and the décor. It shelters car parks and a New York City Fire Department Station. Pizzerias and delis have renamed themselves after the High Line.

When I stand below and stare up at the people on the High Line, I feel a little envious. They seem like ethereal beings compared to my earthbound self. They stride on its brawny shoulders while I dodge taxis and distracted pedestrians beneath. But there’s a charm to being under the High Line, a perspective that reveals its sturdiness and the beauty of its construction. These photos attempt to capture some of that beauty and show the way the High Line integrates with the Manhattan that lies below. 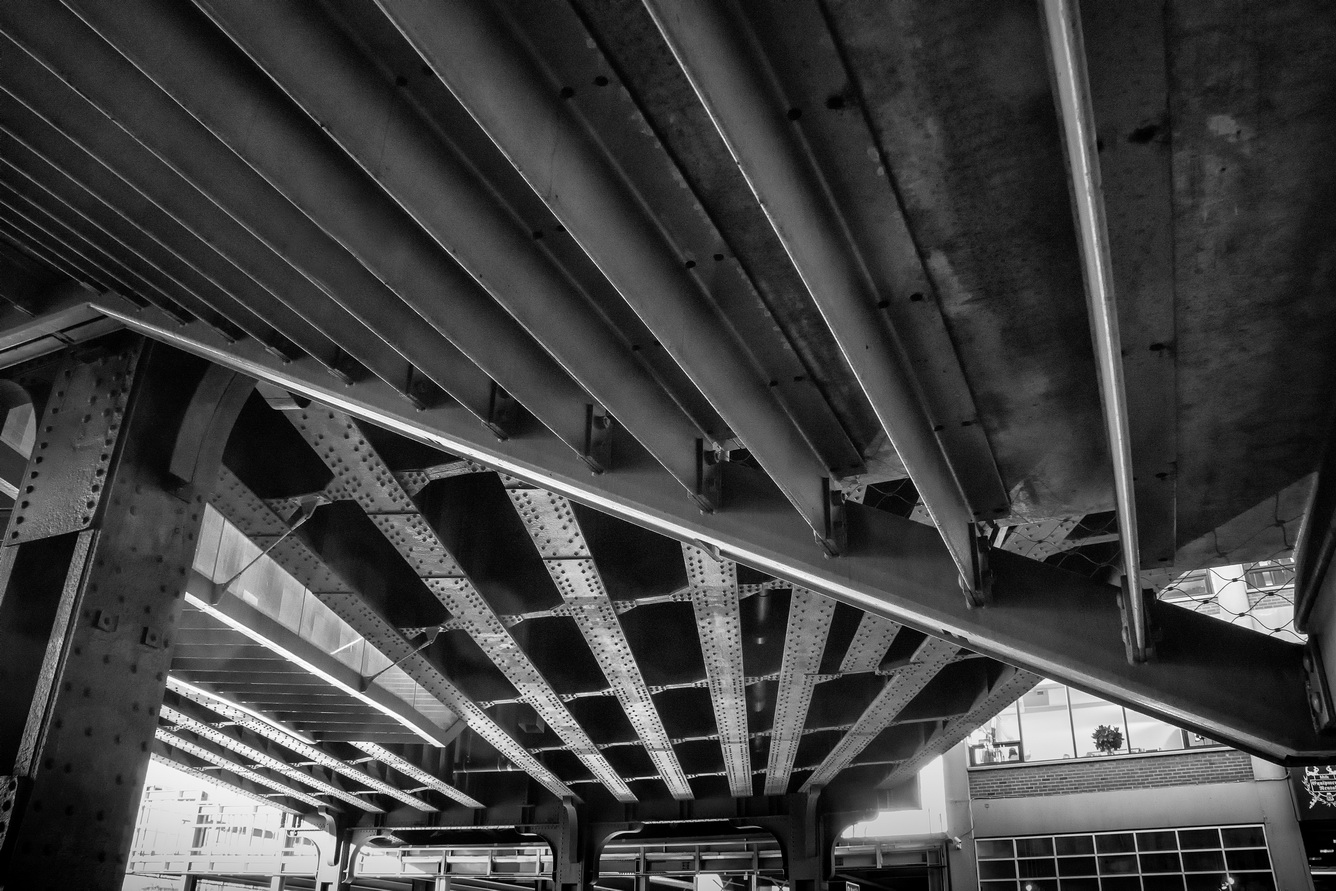 “Appreciation of the High Line’s architecture often is about its angles, here formed by a staircase heading up to the park,” Mike notes.“For photos like this color is usually irrelevant, and black-and-white is a better medium.”Mike Tschappat 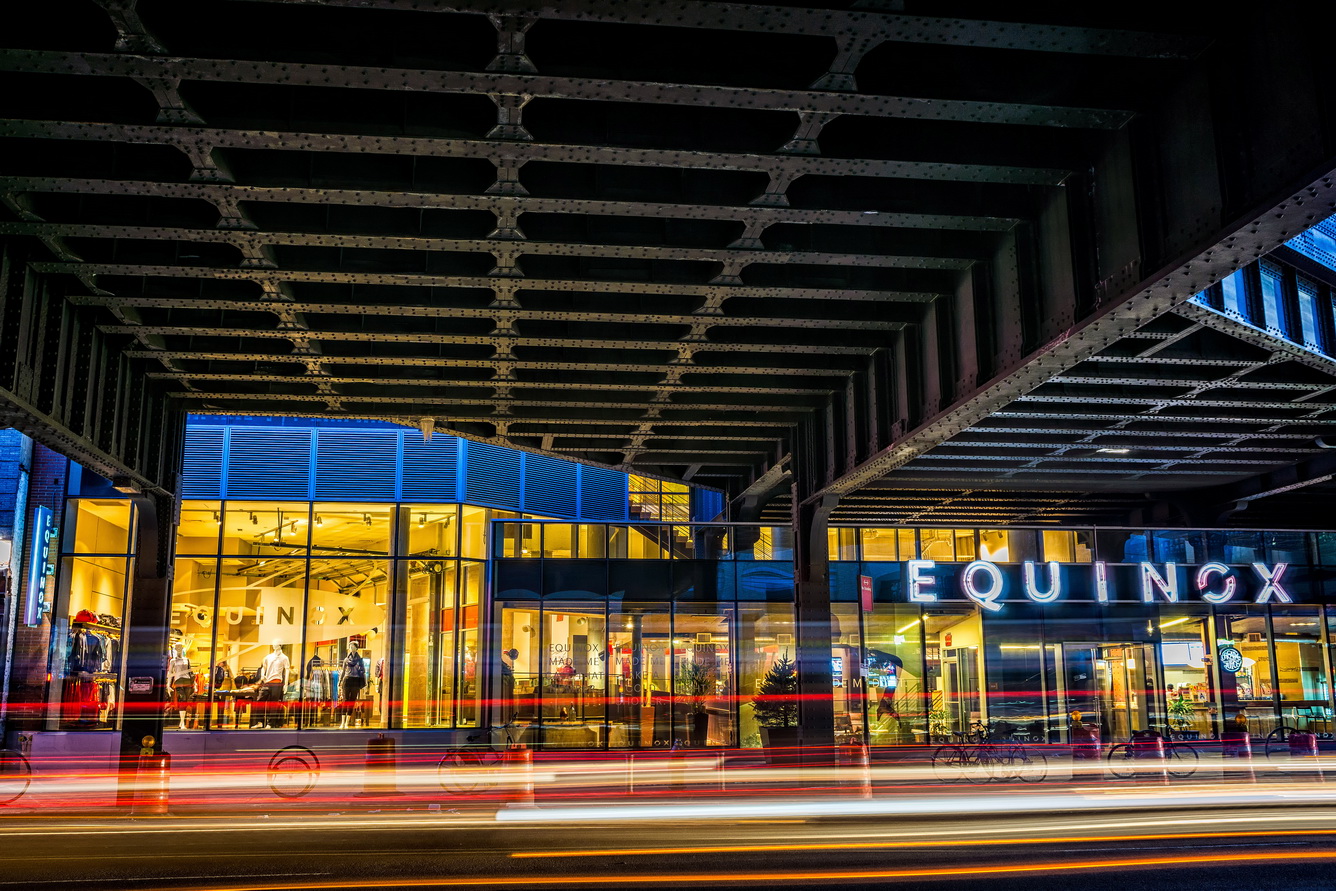 “Stores squat under the High Line, their glass facades making them look light and airy compared to the massive structure above them,” says Mike.Mike Tschappat 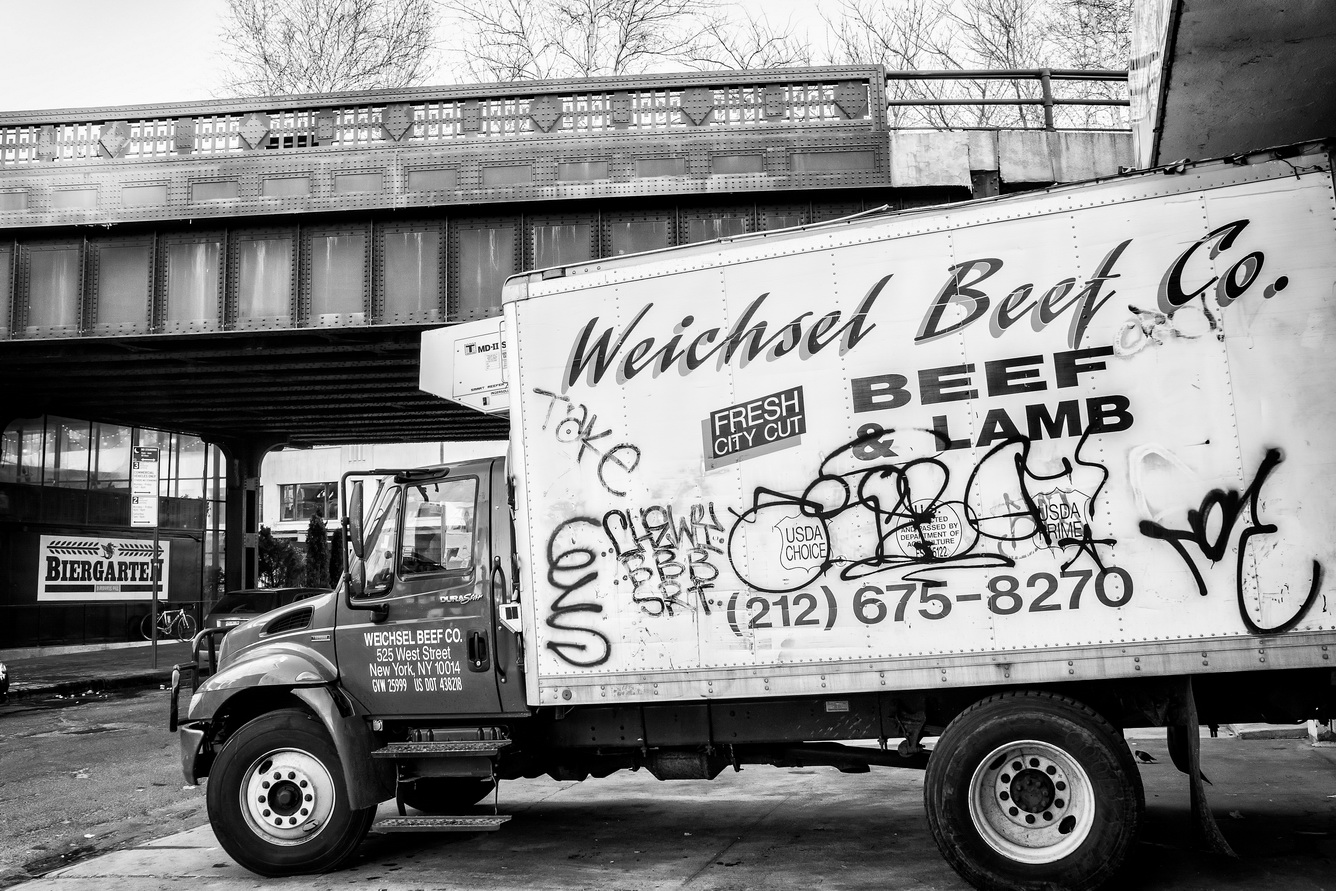 “I took this photo because it reflects the meatpacking history of one of the neighborhoods under the High Line,” Mike says. He captured the image in front of some of the meatpacking district’s still-operational meatpacking plants.Mike Tschappat 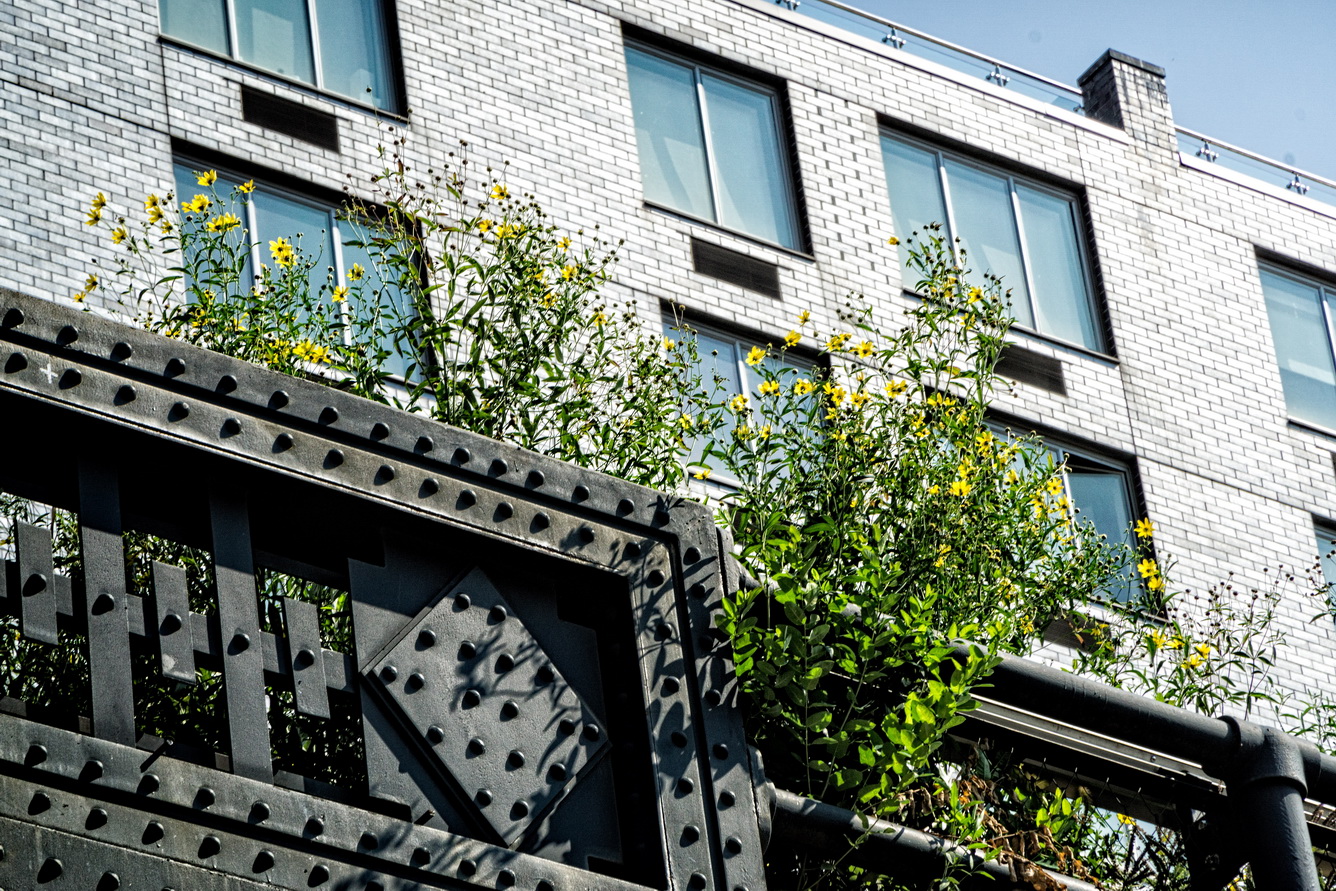 Seen from below, the lush High Line flora tempts one to find the quickest point of ascension to the park.Mike Tschappat 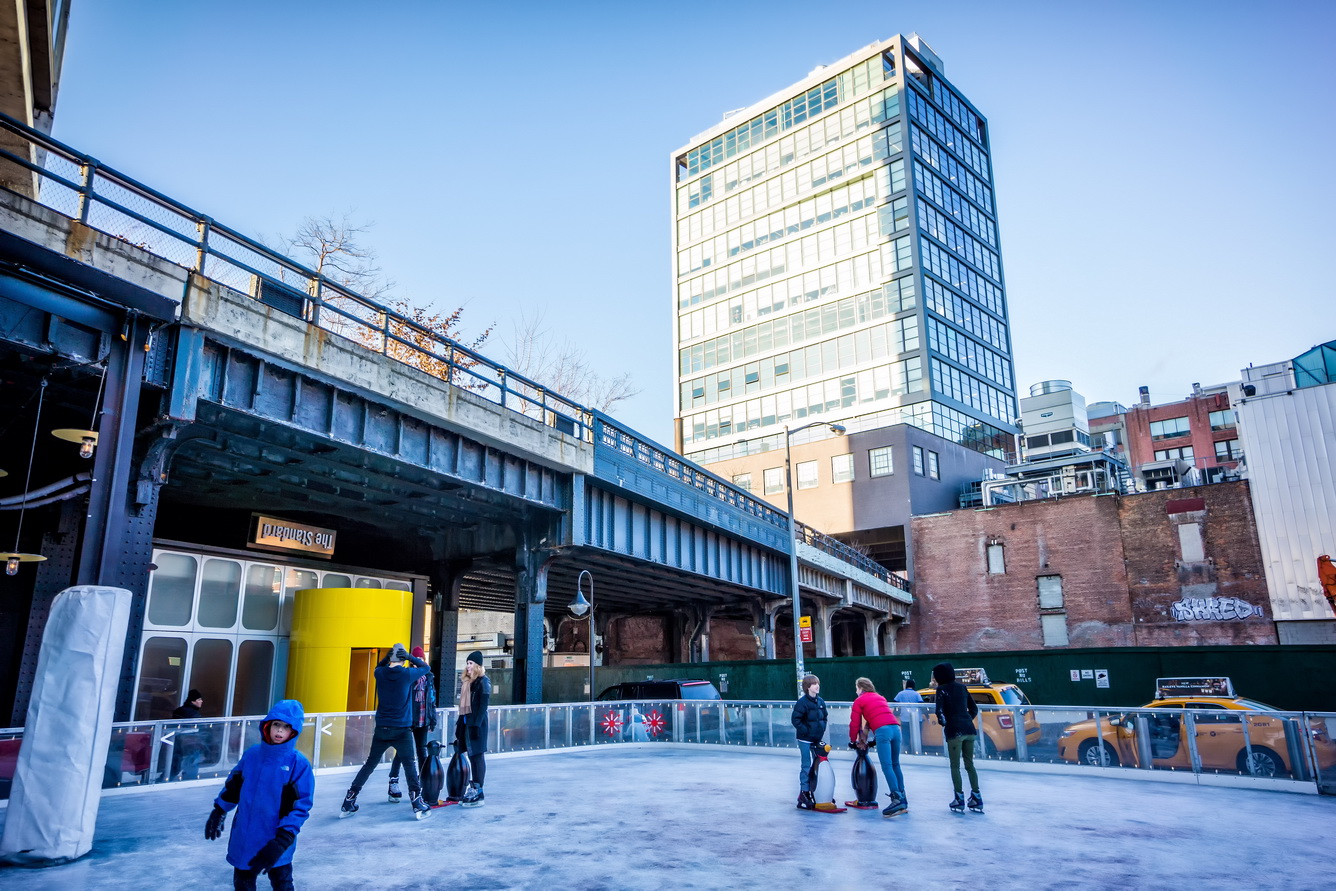 In winter, skaters can pirouette in the shadow of the High Line at The Standard hotel’s rink at West 13th Street.Mike Tschappat 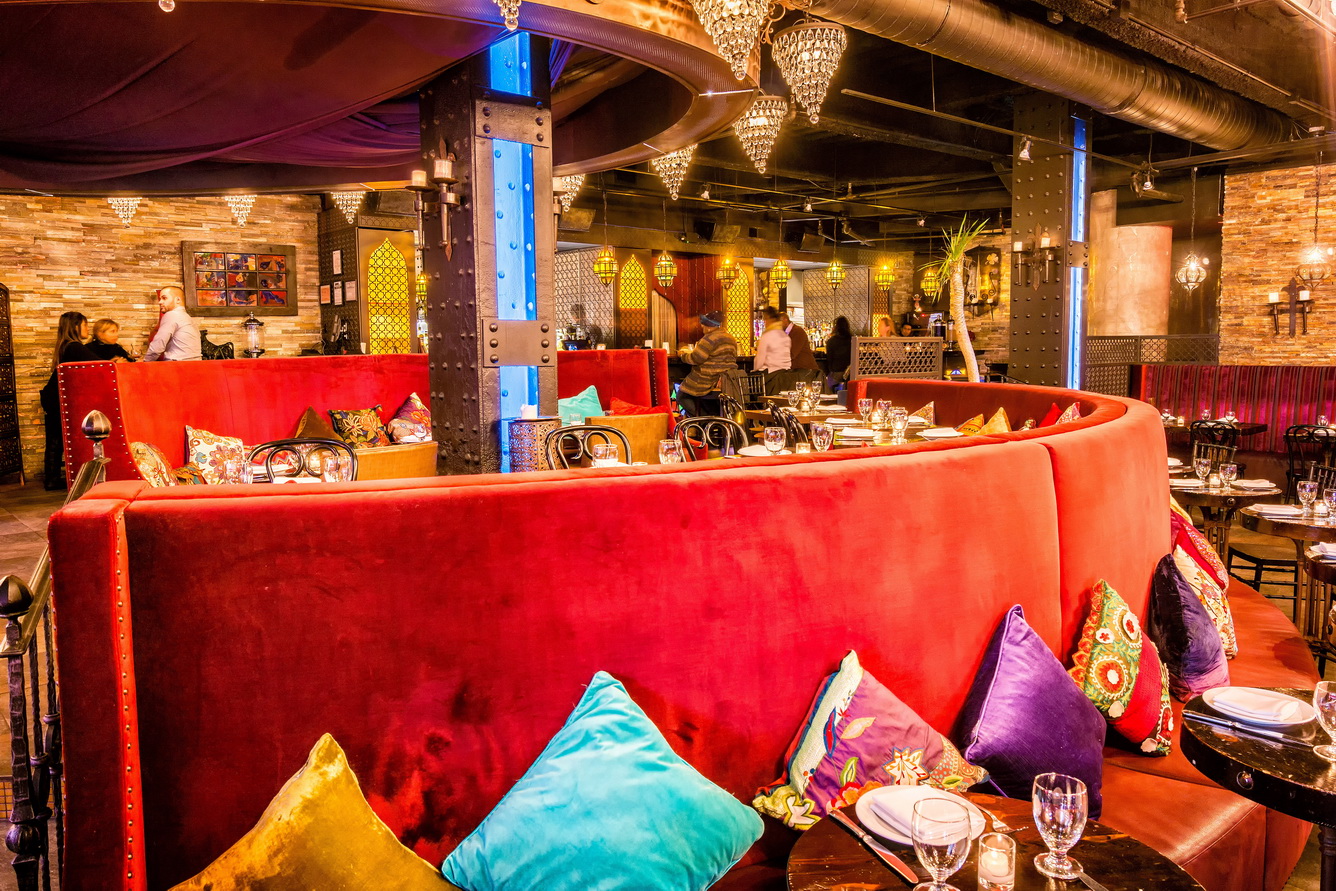 “The impetus to do an under-the-High-Line project was a photo I took of the Flor de Sol restaurant and its brightly painted windows tucked underneath the park,” recalls Mike. “One day I peered through its window and saw that legs of the High Line extended right down into the dining room. I had to have a picture of that. So I marched into the restaurant with my camera and tripod and asked the manager if I could photograph his dining room. He, without a moment’s hesitation, consented. I like the way Flor de Sol has tried to integrate these massive columns into its decor with colorful lighting and lamp sconces.”Mike Tschappat 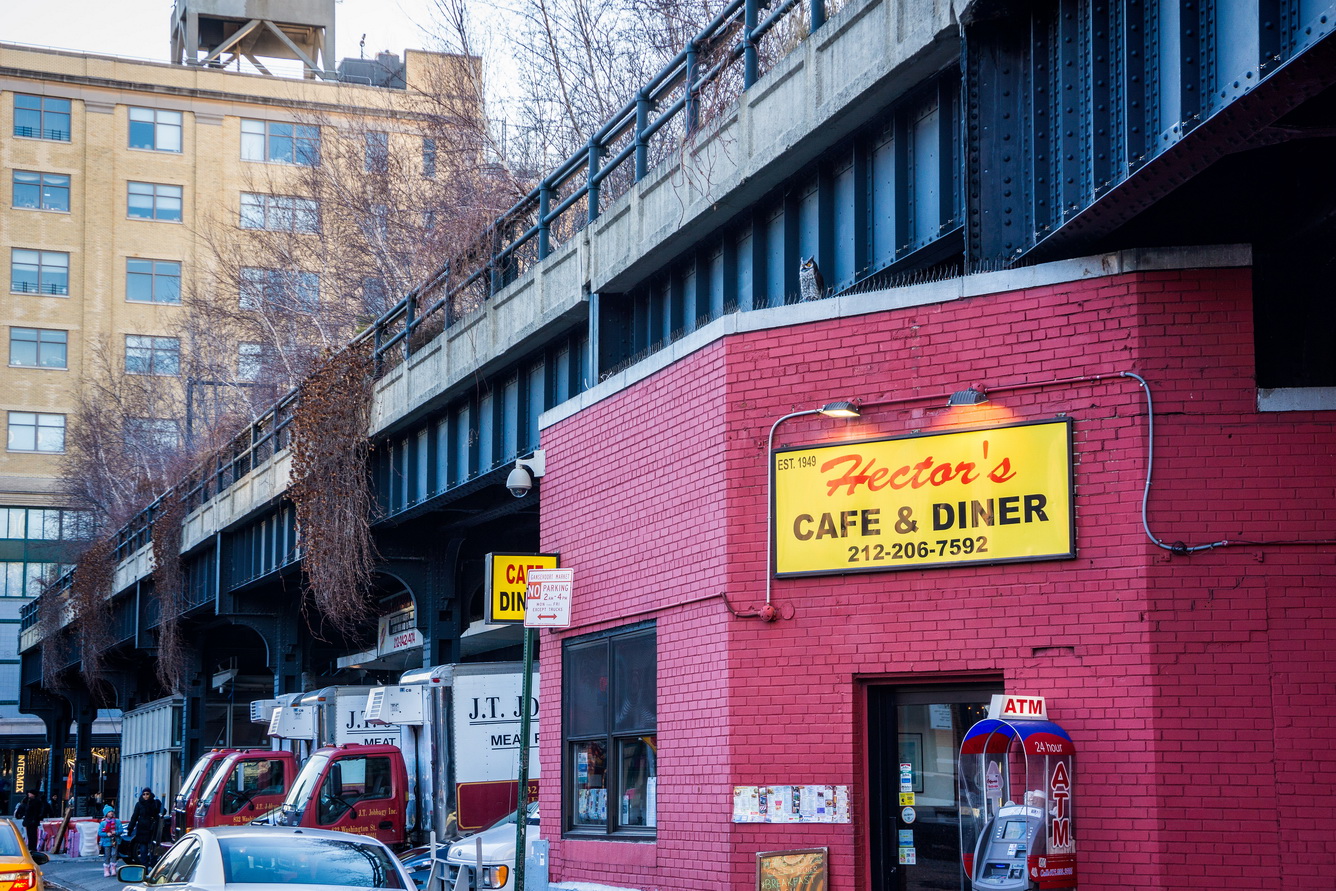 “This photo is all about light and color and the magnificent Frank Gehry building,” Mike says. “Notice the two ghostly figures progressing along the High Line. Unfortunately, nothing in the photo suggests how bitterly cold it was that February evening.”Mike Tschappat

Hector’s Café & Diner is another restaurant that lives under the park. “I wonder which came first, the High Line or the building,” Mike says of this little café that is such a natural part of the park. Editor’s note: The High Line actually preceded the café, but not by very long. Hector’s opened in 1949, 15 years after the High Line was built. 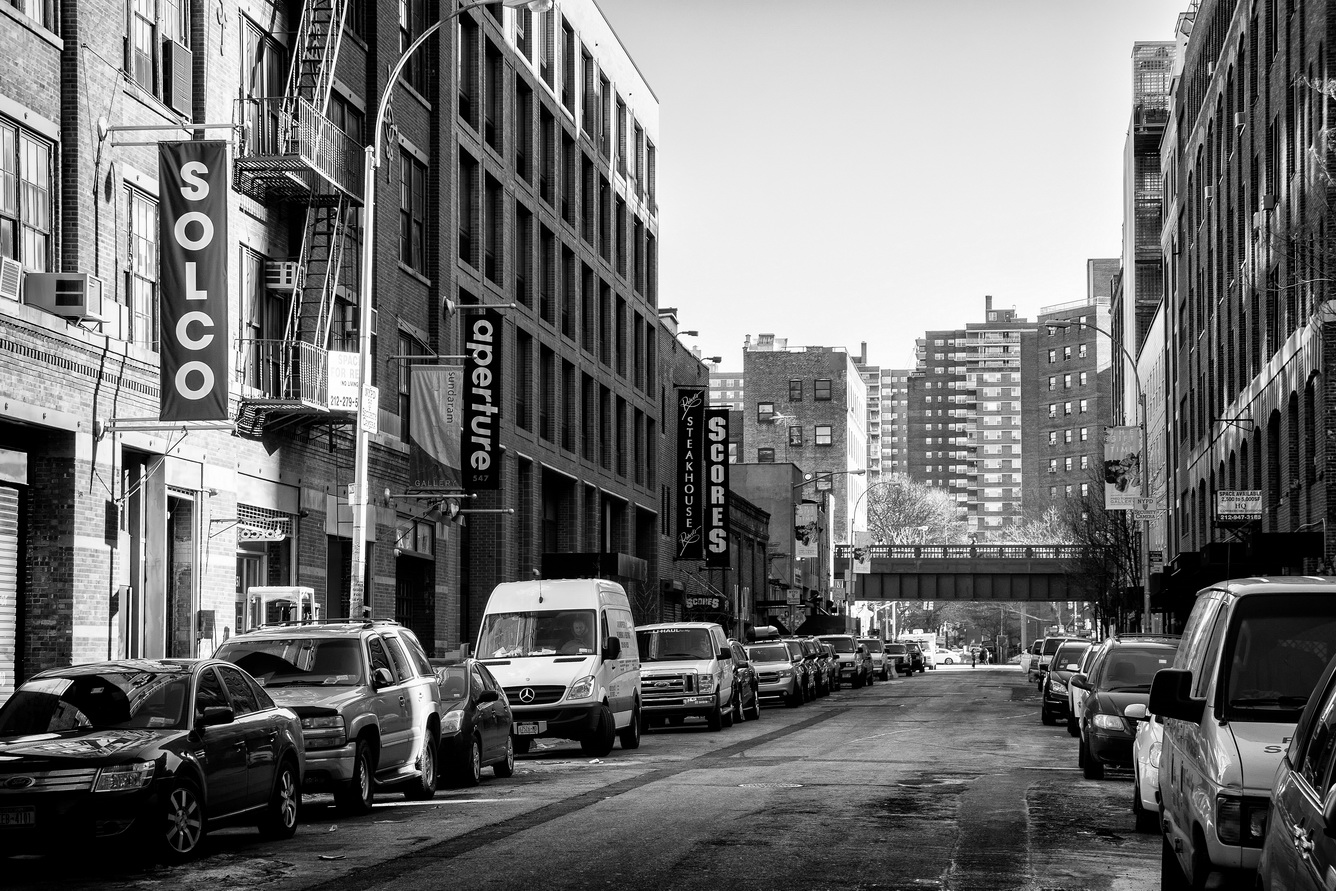 Even from a block or two away, the High Line is ever-present over cross streets on the West Side.Mike Tschappat 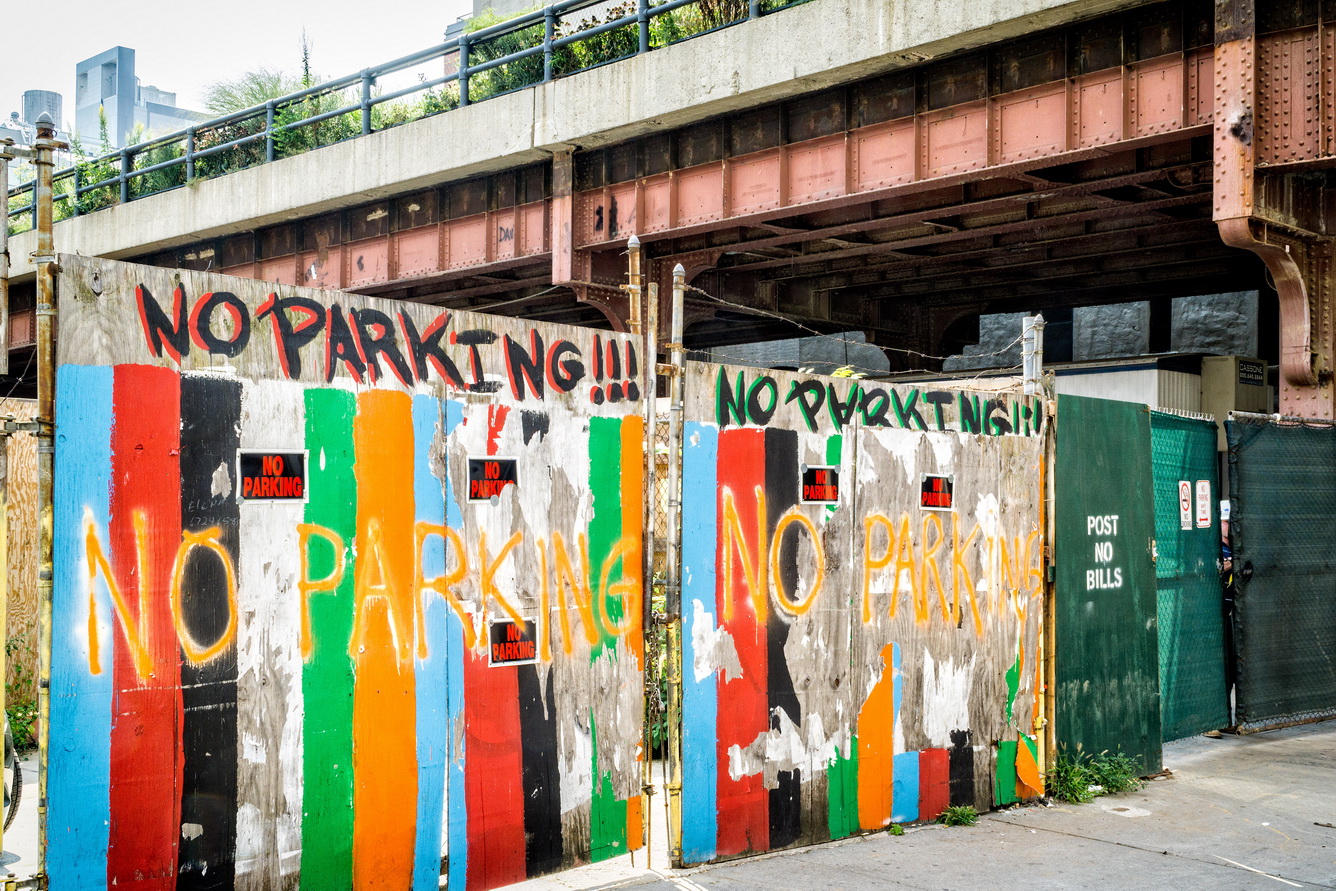 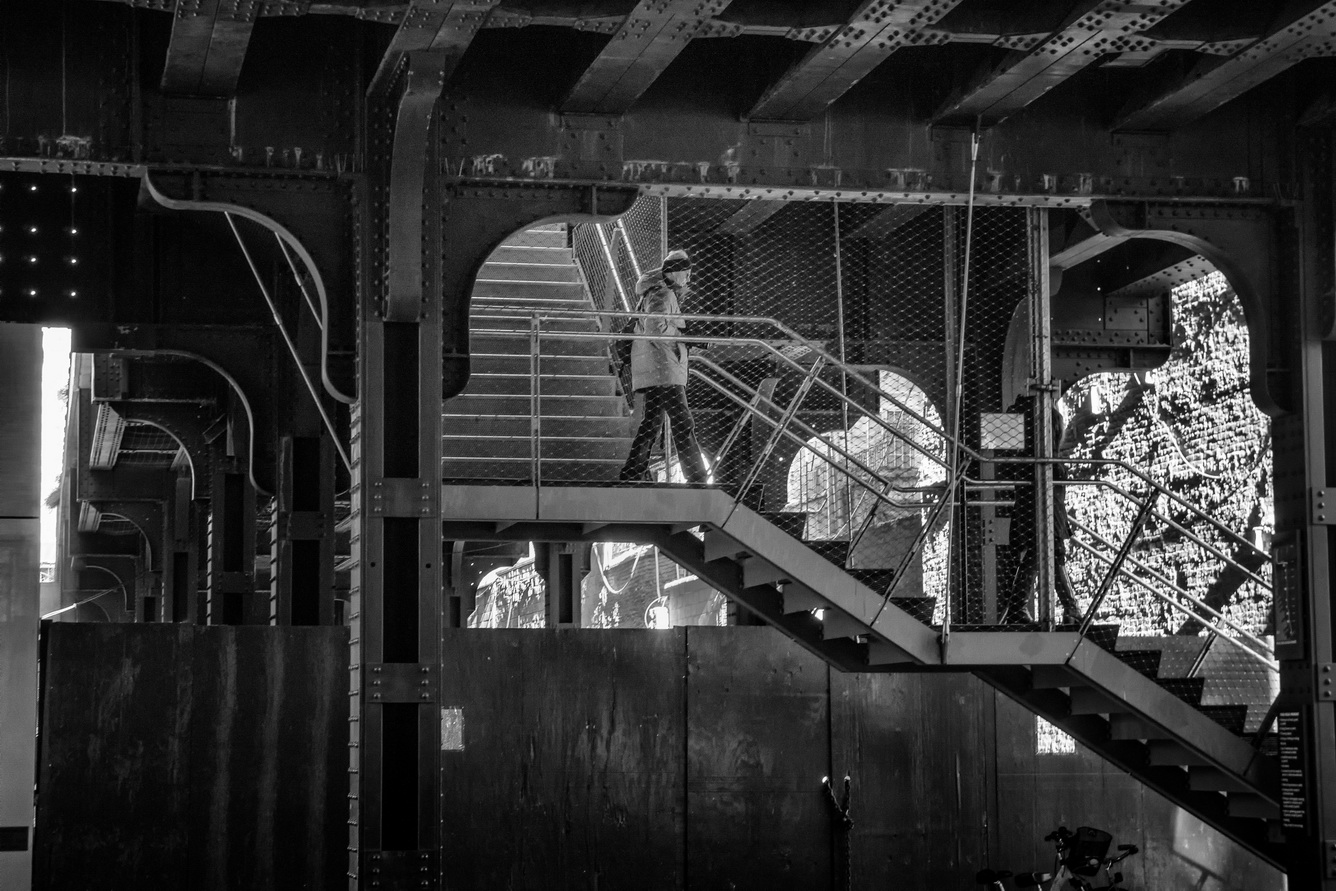 A visitor gives needed scale to the powerful girders of the High Line.Mike Tschappat 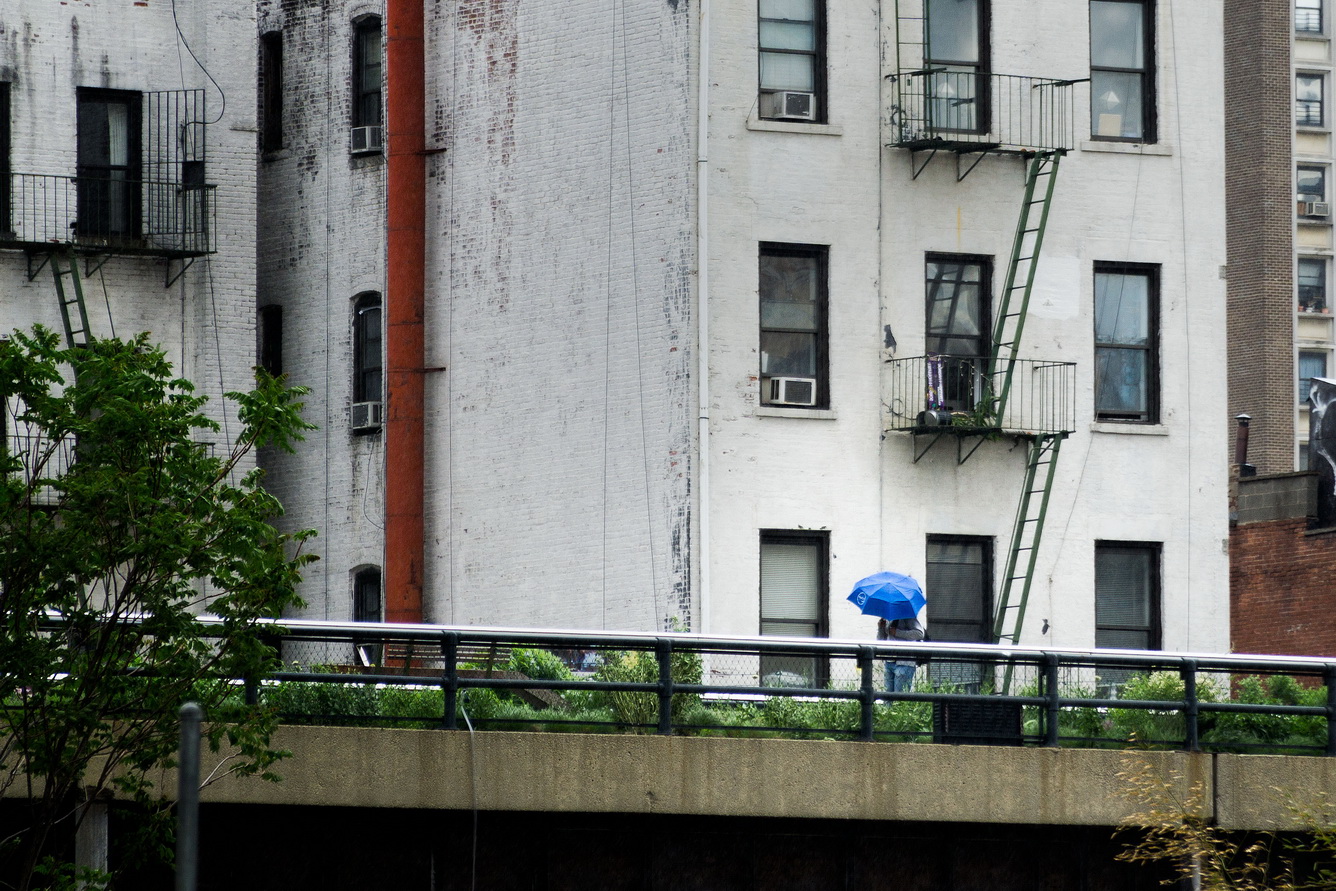 Oh, the sacrifices of getting the perfect shot! “I waited for someone with a colorful umbrella to walk by on this rainy day,” Mike recalls.Mike Tschappat 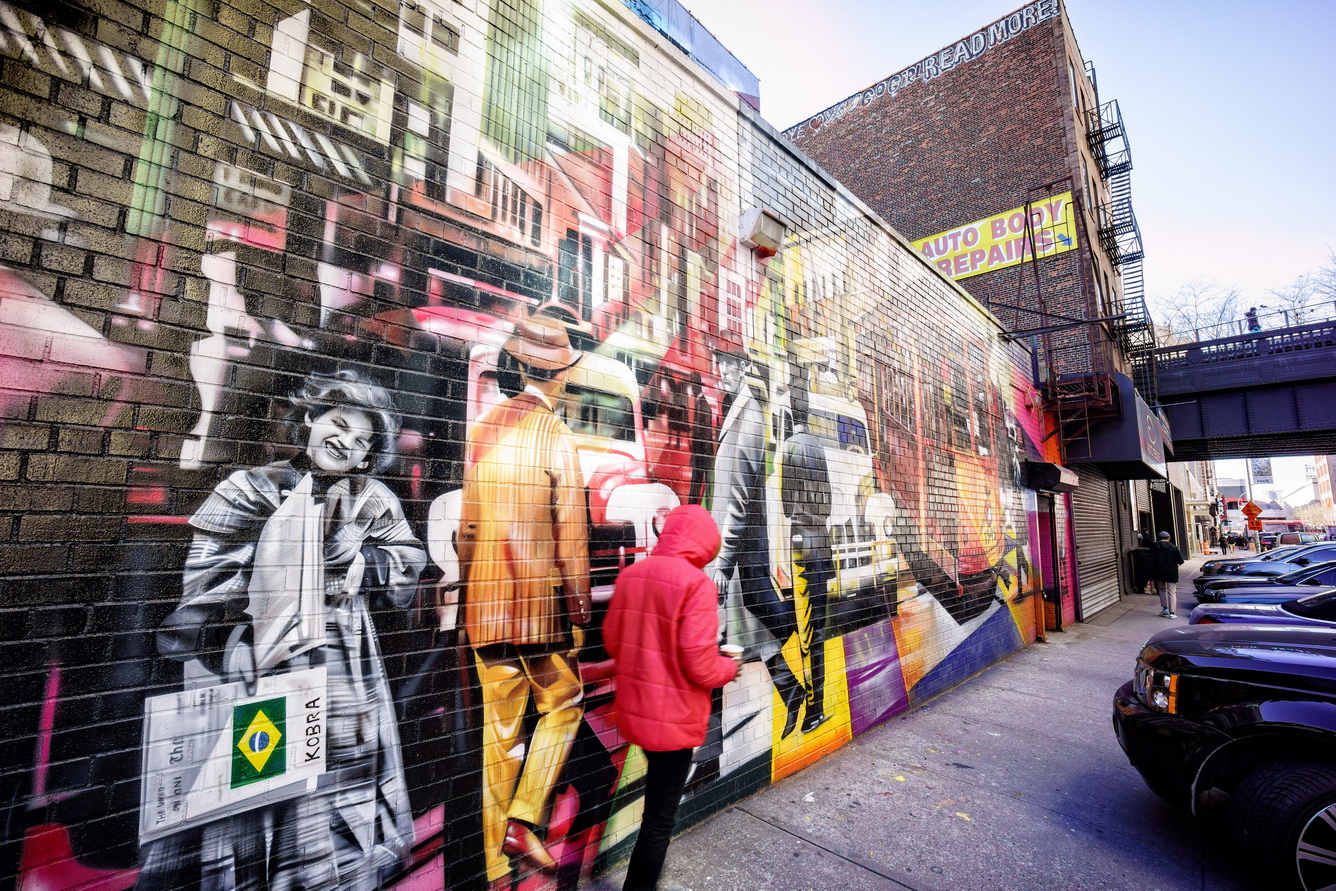 “I would like to say I planned this photograph, but it was only looking at it afterwards that I noticed how the walker with her colorful coat almost becomes part of the mural,” says Mike of this serendipitous composition.Mike Tschappat 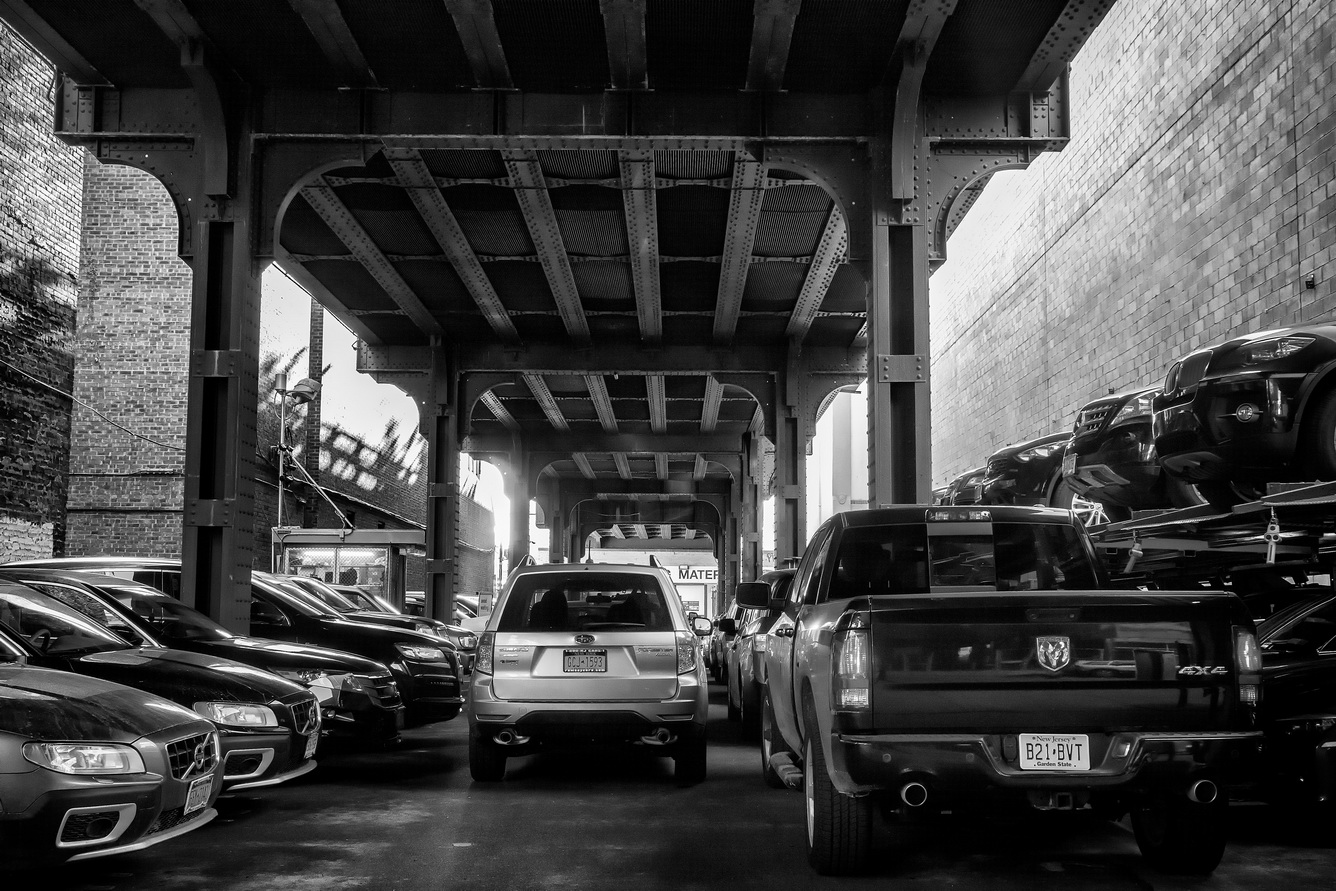 With so little room to park in New York City, the spaces under the High Line provide a natural protected lot.Mike Tschappat

Mike often takes his most compelling shots after sunset. “Night can be as beguiling under the High Line as it can on it,” he says. 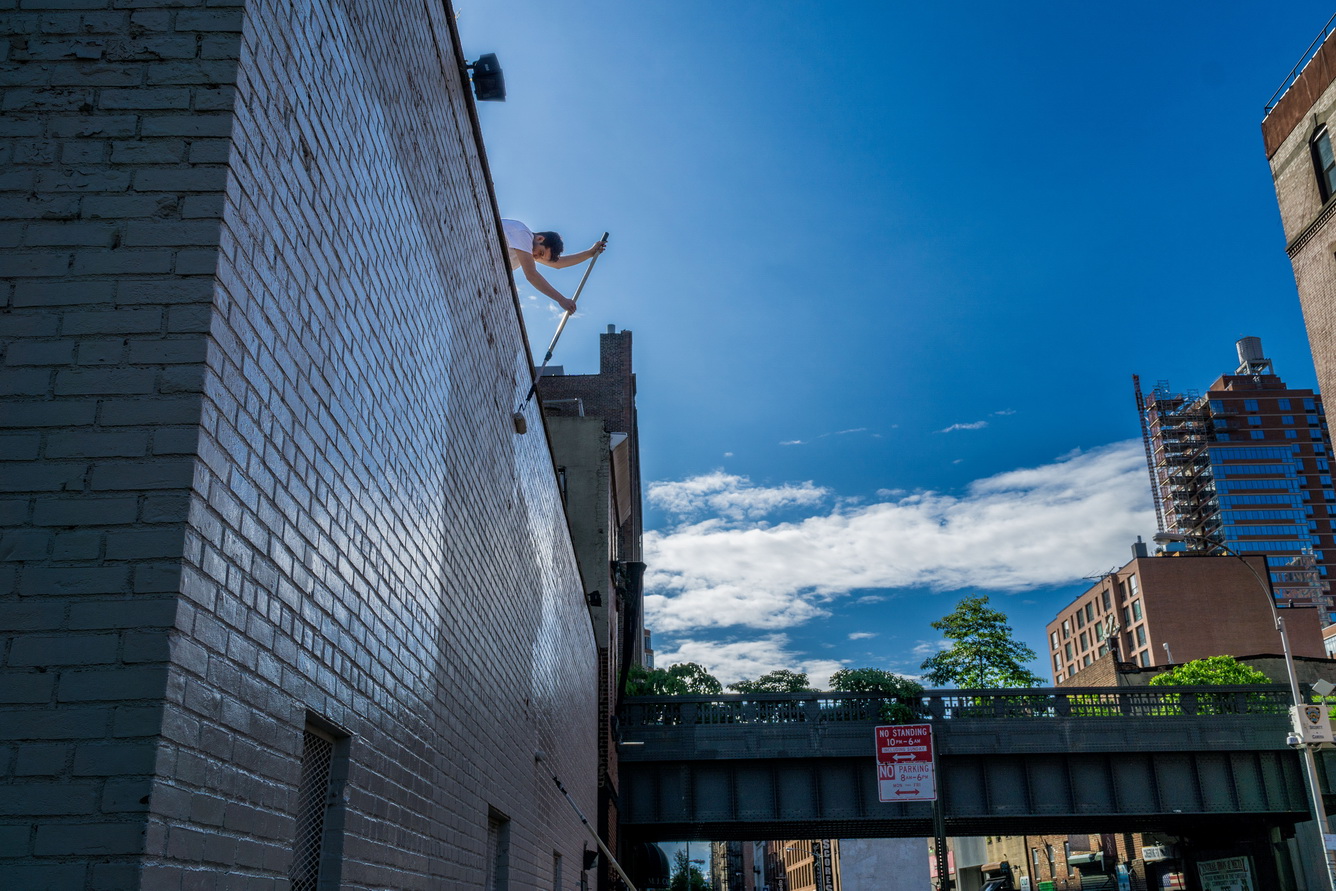 “I was always on the lookout for interesting activity near the High Line,” Mike says of his Under the High Line project. “This is one of my favorite photos, with the man whitewashing the wall standing out against the blue sky.”Mike Tschappat 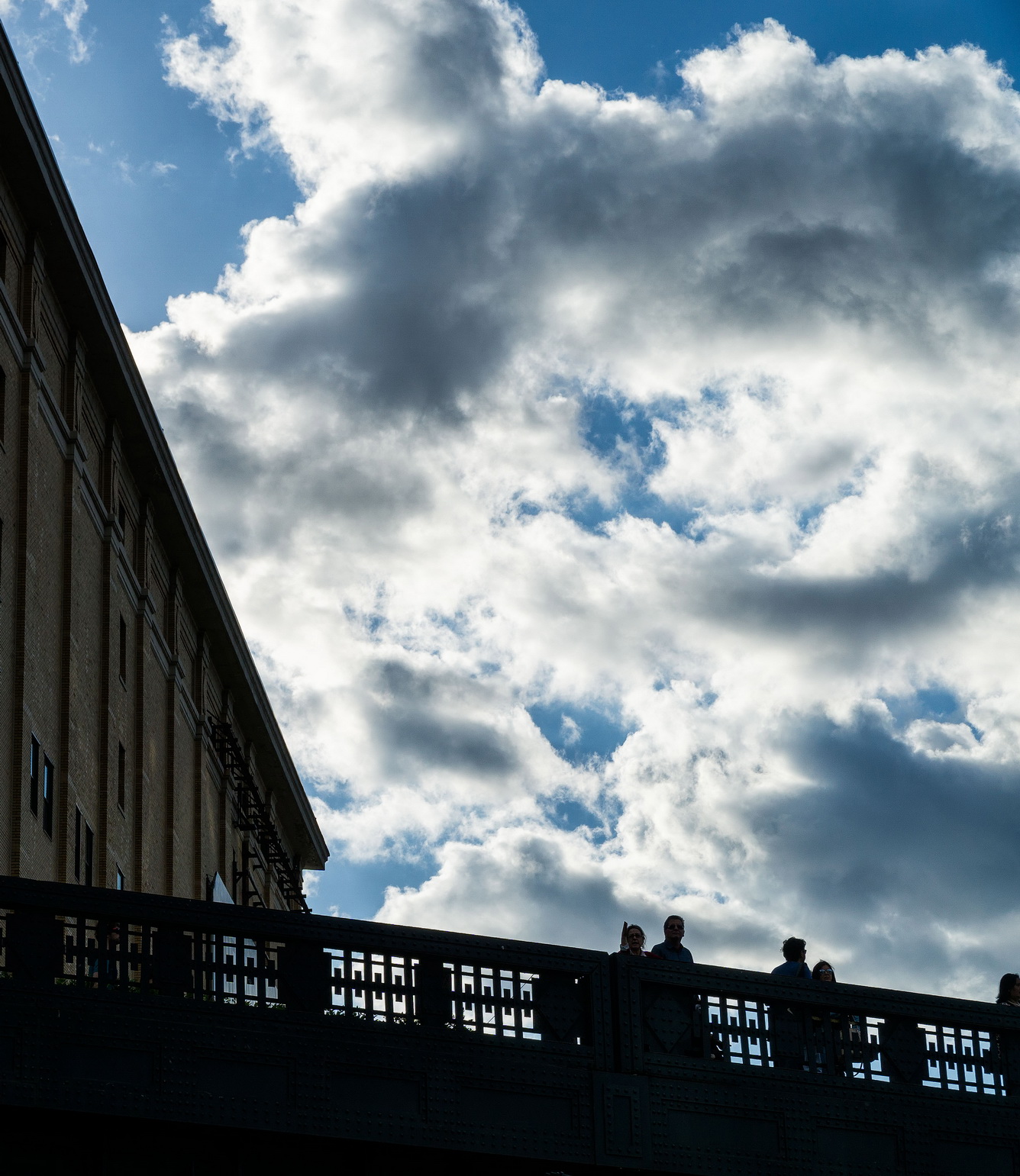 Seen from below, the High Line almost always seems to have a backdrop of clouds.Mike Tschappat 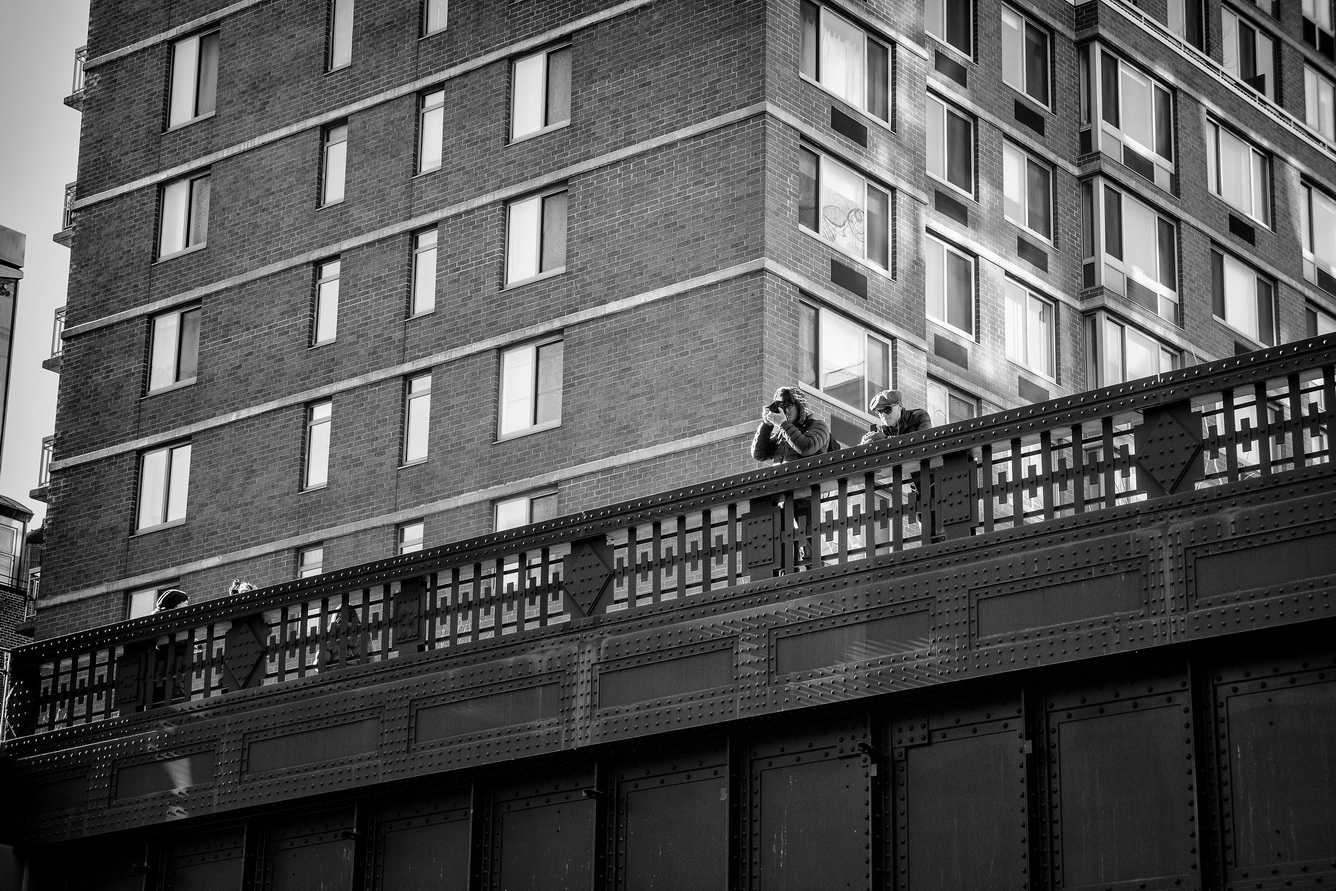 “People, cameras, and the High Line seem to go together,” Mike muses – and­­­­ any photographer would agree. “As I watch from the street, visitors to the park either point their cameras over the edge or stand contemplatively as they look out over the city.Mike Tschappat

See more of Mike’s photos in his Flickr Photostream.