The Importance of Youth Employment at Friends of the High Line

“While compensating interns is necessary, it is not sufficient,” writes Ford Foundation President and Friends of the High Line Board Member Darren Walker in an op-ed that appeared in the July 5, 2016 edition of The New York Times. As Walker notes, many institutions—including nonprofits—don’t pay their interns, or provide them with real-world skills that are essential to long-term career success. 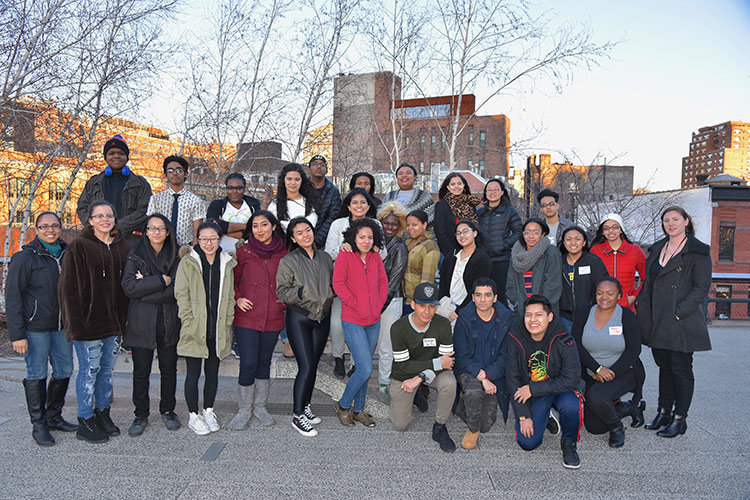 Access to those internships is the larger issue, though: In the current system, Darren writes, “contacts and money matter more than talent, [contributing] to an economy in which access and opportunity go to the people who already have the most of both.”

The values and recommendations Darren talks about in his op-ed—seeking out candidates who may not have resources or connections; teaching the importance of networking; paying a competitive wage; and exposing young people to viable, fulfilling career paths—resonate with us and our approach to engaging young people in our neighborhood. We think it’s great that Darren has brought attention to these issues, and we’re proud that the values he writes about are broadly reflected in our youth programs.

Since 2012, we have offered teen employment opportunities that have given more than 100 teens important training in professional skills that are difficult to get in more traditional educational or work environments. Darren’s vision—and vital support from Ford Foundation—have helped make this possible.

Our programs empower local youth, as well as provide access to our networks. The programs grew out of an expressed need from members of our community—particularly New York City Housing Authority residents—for high-skill job opportunities for teens, and they provide the kinds of training and access that help youth get ahead.

Every year, 30 to 35 teens work at least 175 hours each and are all paid a competitive wage so that the teens don’t need to choose between working in food service or retail and working and learning with us. And whether teens are part of Green Council—a green jobs and horticulture training program that offers hand-on experience in horticulture, agriculture, and food justice—or the Teen Arts and Culture Council (TACC)—which trains teens in cultural event production—Friends of the High Line’s youth employees are treated as integral to our full-time adult staff. Our teens are regular presences around our offices and on the High Line, and we encourage them to use us as resources. Our program also offers several teens the opportunity to return as alumni leaders.

Our teens are currently gearing up for Wanderland on July 14—the first TACC night of the year, which is expected to draw more than 1,000 teens from all five boroughs—and we’re excited to see what’s in store for the evening. We’re even more excited about our youth program and the opportunities it gives its members—and for what those members do for Friends of the High Line.

High Line Youth – part of High Line Community Engagement – is generously supported by Ford Foundation. Additional funding is provided by the Google Community Grants Fund of Tides Foundation and Merck Family Fund. High Line Youth is supported, in part, with public funds from the New York City Department of Cultural Affairs in partnership with the New York City Council – with special thanks to Council Member Corey Johnson and the Greener NYC Initiative.

TD Bank is a Supporting Sponsor of Green Council.