BRANCH OUT FROM THE ORDINARY GIFT 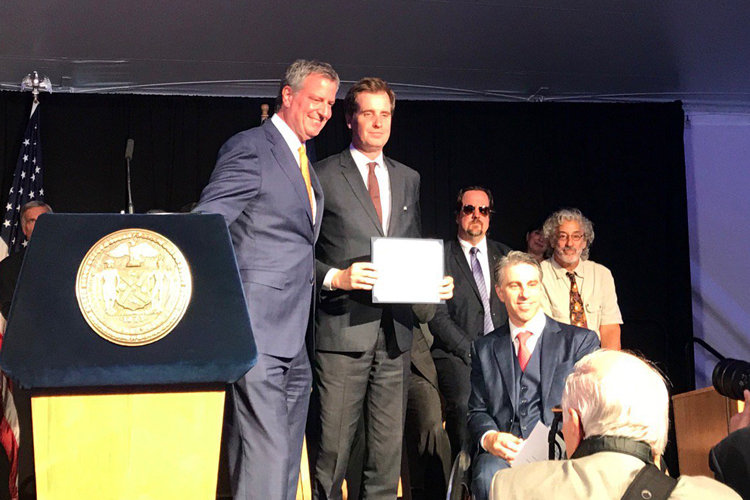 At the city’s annual ADA Sapolin Awards ceremony, New York City Mayor Bill de Blasio presented the city’s Title II Public Service Award to Friends of the High Line in recognition of the organization’s “commitment to improving the lives of people with disabilities, specifically its dedication to overseeing maintenance, operations, and public programming in a park which is accessible to all visitors.”

Friends of the High Line was proud to be recognized by the New York City Mayor’s Office for People with Disabilities for its commitment to making the High Line an accessible place for all. It was especially touching that the awards ceremony took place on the 27th anniversary of the passage of the Americans with Disabilities Act (ADA).

Every part of the High Line was designed to be accessible, from walkways that accommodate the width of two wheelchairs, to multiple elevator access points spread throughout the 1.5 mile-long park, to integrated companion seating, and picnic tables with clearance for wheelchair users. Even features like the Sunken Overlook at the 10th Avenue Square were created with accessibility at their core—the seating steps are ingeniously linked by a zig-zagging ramp navigable for people using wheelchairs.

Victor Calise, Commissioner of the Mayor’s Office for People with Disabilities, has worked with Friends of the High Line and the New York City Department of Parks and Recreation throughout the design process—and continues to consult with the team—to ensure the park remains an example of a truly accessible public space.

“It has been a true pleasure to work with Mayor’s Office for People with Disabilities, particularly with Commissioner Calise, and with the Department of Parks and Recreation to create an accessible space. We look forward to continuing that partnership and our commitment to ensure every aspect of the High Line remains accessible and enjoyable for all visitors,” said Adam Ganser, Vice President of Planning and Design, Friends of the High Line.