Snow Removal on the High Line 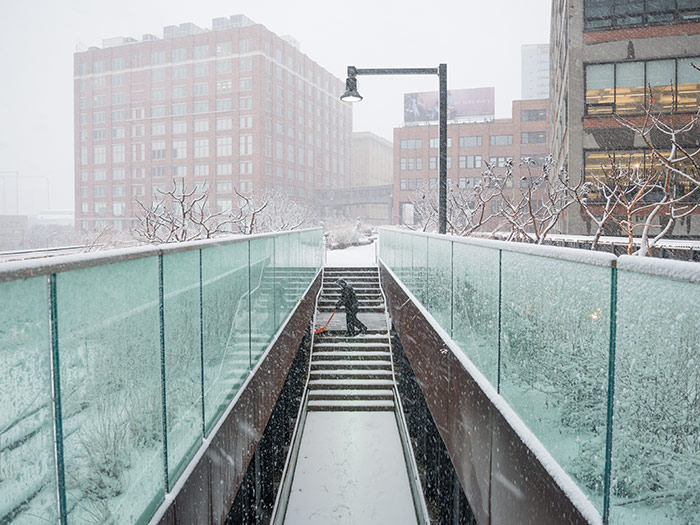 In New York City, snow is divisive. There are those who awe at the weatherly marvel, and those who see the fluff as a nuisance and disruption. No matter what side you’re on, snowfall this time of year is inevitable. And here at the High Line we want to make sure the park is safe for winter visitors so we can, perhaps, bridge this icy divide: we’ll take care of the inconvenience so you can enjoy the magic.

The safety of our visitors is our top priority. We block off sections of the walkway that have become slippery and close areas of the park when walking becomes too dangerous. Compaction of snow is a big issue we face on the High Line. With that in mind, we close the park frequently when it’s snowing. When visitors are in the park before we clear even a light snow, the compaction from foot travel turns the snow into a solid sheet of ice that can take days to reduce. If we keep visitors (and staff) out of the park until the snow stops falling, the snow is easier to remove and we can get the park reopened more quickly. While many visitors would like to see the High Line in the snow, we find that if we close early on during the storm, we don’t have to stay closed as long after it’s passed. 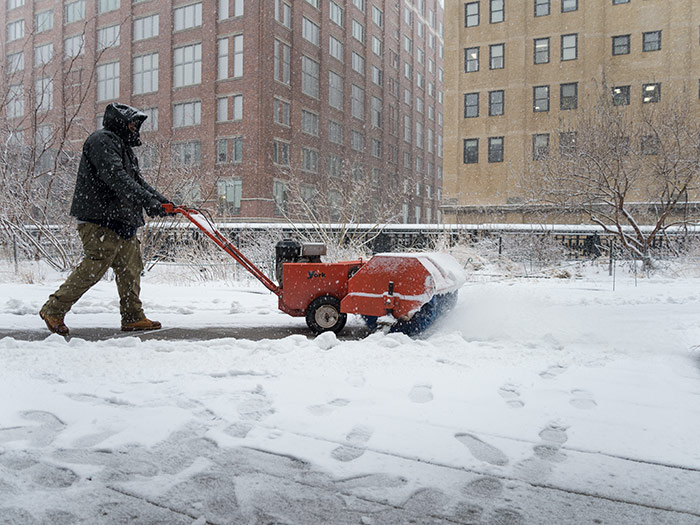 After a storm, our staff arrives early—often before sunrise!—to clear the path to get the park back up and running. The tools in our arsenal include power brooms, snow-throwers, and, of course, good old snow shovels. However, we avoid using rock salt and chemical ice-melt because of the damage these products would cause our plants.

We’re grateful for the staff who remove dangerous ice and snow from the park. Clearing the stairs is a time-consuming task, as the steps are shoveled completely by hand. And keeping the walkways free of ice is a particularly difficult job because the High line is exposed, much like a bridge, making surface temperatures drop quickly.

With wet snow, damage to the plants is a concern. Our team works to minimize the negative impact that heavy snow and ice have on our trees, grasses, and perennials. To avoid breakage gardeners will gently shake trees or knock heavy snow off tree limbs because snow banks can flatten perennials. (Although, “sleeping” plants are actually protected by the insulation offered by snow cover.) Overall, the plants on the High Line are hearty and can withstand tricky weather. 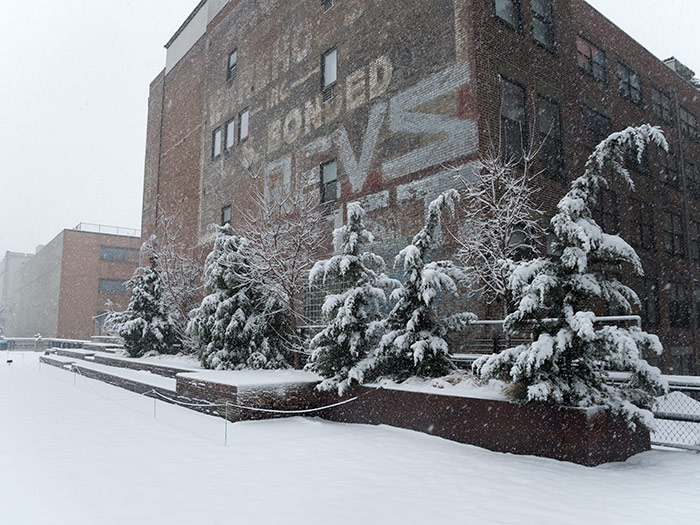 The branches of the High Line’s Eastern red cedar trees, Juniperus virginiana, bend under the weight of heavy snow.Timothy Schenck

If you’re ever wondering what conditions are like in the park, follow us on Twitter—our staff wakes before dawn to alert the public of any closures and will update throughout the day.

While we work hard to clear the snow and ice, when the storm is heavy, stay inside and hibernate. And then, once the storm subsides, return to the park to walk above the frosted, and once again united, city.