Where is it from?

As you enter or exit the park near the northernmost section of the High Line, you’ll notice a self-seeded display featuring hundreds of white flowers that cover the length of the Interim Walkway. Aggressive and hardy, yet alluringly attractive, Daucus carota, or Queen Anne’s lace, is considered an invasive and notorious weed in many parts of the world. Native to temperate regions of Europe and Southeast Asia, Daucus carota was introduced to North America by colonists as a medicinal herb for uses as a diuretic, an antiseptic, a treatment for digestive issues, a hallucinogenic and more. It has since naturalized itself across much of the North American continent.

How does it grow?

Flower clusters bloom on umbels from late spring through fall. Each umbel contains hundreds of intricately woven flowers. The seeds ripen as the season progresses toward fall, curling the umbel upwards, shaping it into the form of a bird’s nest. 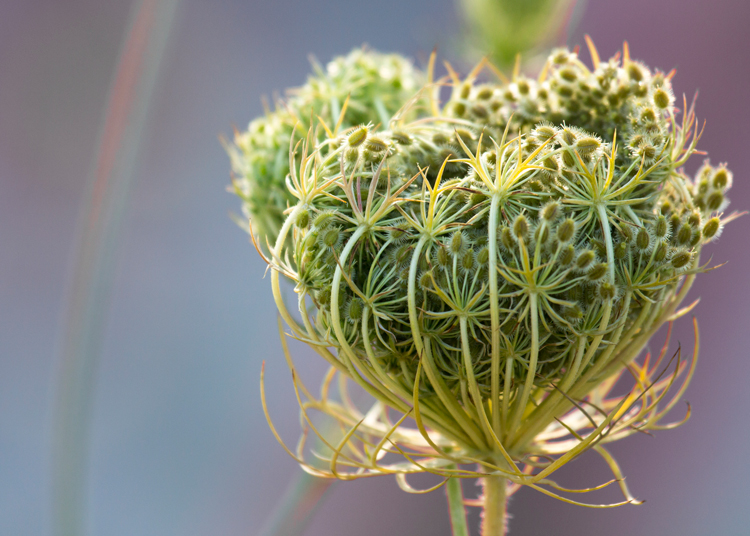 Daucus carota belongs to the Apiaceae, or parsley and carrot family of flowering plants. Many members of the Apiaceae family have become staple additions to our modern way of life such as fennel, celery, anise, and parsley. Apiaceae can most easily be identified by their compound umbels, similar to the flower clusters seen on the Daucus carota.

What’s in a name?

Queen Anne’s lace is said to be named after Queen Anne herself. Queen Anne was well versed in lacemaking. One day while sewing she pricked herself with a needle. A drop of blood fell unto her lace, leaving a single dark purple floret in the center of the flower. 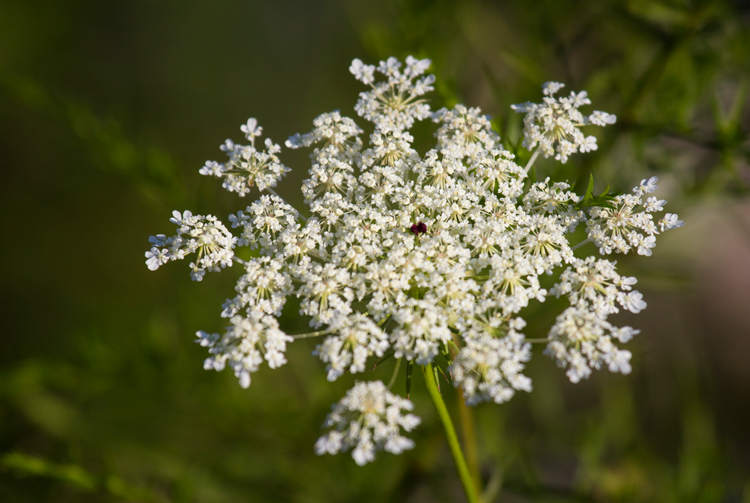 A single purple floret can be seen in the center of the umbel of the Queen Anne’s lace.Photo by Ayinde Listhrop

How is it used?

Aside from its showy nature, most parts of the Daucus carota are edible and so it comes as no surprise that it has found its way into many kitchens over the centuries. Europeans cultivated Daucus carota and it was eaten as a vegetable in the Roman Empire. The roots are second only to beets in sugar content among root vegetables and were used as sweeteners by many cultures. Leaves can be chopped and added to salads and the flowers can be eaten raw or battered and fried. Most parts of the plant can be added to soups, stews, and teas to add flavor.

It should be noted, whereas Daucus carota has found many medicinal and culinary uses, it bears a striking resemblance to its cousin, poison hemlock, which is extremely toxic and fatal if ingested. Perhaps the most famous victim of hemlock poisoning was the great philosopher and teacher, Socrates, who was sentenced to death for his liberal thinking and was prescribed a cup of poison hemlock to fulfill his execution.

PLANTING TIP:
Daucus carota is considered a weed in the continental United States and an invasive in 14. It grows best in disturbed soils such as abandoned lots and along roadways. Planting is not recommended. If you must have it around, its spread can be controlled by carefully removing the birds nest seed heads before they fully ripen.

WHERE TO FIND THIS PLANT:
You can find Daucus carota on the Interim Walkway, between West 30th Street near 11th Avenue and West 34th Street.

The High Line’s planting design is inspired by the self-seeded landscape that grew up between rail tracks after the trains stopped running in the 1980s. Today, the High Line includes more than 500 species of perennials, grasses, shrubs, and trees – each chosen for their hardiness, adaptability, diversity, and seasonal variation in color and texture. Some of the species that originally grew on the High Line’s rail bed are reflected in the park landscape today. Every week we share one of our gardeners’ current favorites with you.