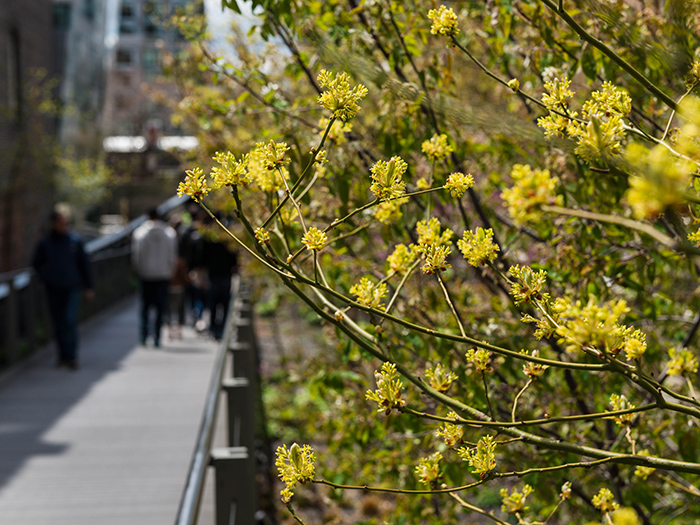 Up and down the High Line, the sassafras trees are blooming. They’re easy to miss among the other flowering trees—the white serviceberries and magenta eastern redbuds, for example—but the sassafras are stunning in their own right. Open clusters of chartreuse flowers perch on twigs that turn up at the ends, giving these small trees the appearance of a candelabra growing up out of our planting beds. Fuzzy leaves emerge from between the blooms and by June they’re fully dressed in their distinct, mitten-shaped leaves. The leaves of Sassafras albidum actually come in three different shapes: oval, mitten, and three-lobed, all growing on the same plant, making it easy to identify among its neighbors in open woodlands and at woodland edges.

A rich, and delicious, history

This small tree, native to the eastern half of the United States, has a rich ethnobotanical history. At one time, early in the 17th century, it was one of this country’s largest exports. Its essential oil, distilled from the roots or bark, contains safrole, which was once used in cosmetics and medicines and as a primary ingredient in traditionally brewed root beer. However, the FDA banned the extract for use in commercially produced products in 1960, after it was found to be carcinogenic. A spice made of dried, ground sassafras leaves – which do not contain safrole—is known as filé powder and used as a flavoring and thickener in creole and Cajun-style cooking. Filé is such an essential seasoning in gumbo, jambalaya, and other Cajun dishes that Emile Zatarain (who, incidentally, began his Zatarain’s food product empire by marketing root beer made with sassafras extract) has been attributed with saying, “it’s a sin to eat to gumbo without filé.”

Where to see sassafras