The Enduring Flowers of Spring

Even if we can’t witness it, rest assured, spring endures in Manhattan. Two of our most classic vernal symbols, the tulip and the daffodil, grow propitiously, if fleetingly, in the sidewalk beds of the city streets, with little human intervention.

Spring ephemerals are plants that emerge, bloom, produce seed, and disappear all within a matter of weeks. Each plant’s survival strategies evolve in response to the living and non-living elements of its environment. Different species within a genus often display radically different adaptations.

Ephemerals of the Northeast take advantage of the abundant sunlight that reaches the forest floor in early spring. Their foliage emerges before that of deciduous trees and through photosynthesis they produce sugars which they sock away in underground storage structures. In a matter of weeks, these plants have saved up enough energy to go dormant for the rest of the year and re-emerge the next spring.

The sweet faces of spring favorites like tulips (Tulipa sp.) and daffodils (Narcissus sp.) belie their tough natures. Though we often associate such bulbs with the cool pastures of the Netherlands, many originally evolved in harsh, dry climates in the Mediterranean, Middle East and Central Asia. Spring ephemerals are also called geophytes—from the Greek for “earth” and “plant”—because for most of the year the plant is dormant underground. Underground storage structures enable these plants to survive drought, extreme temperatures and high winds. Both tulips and daffodils store energy in their bulbs, which, like onions, comprise layers of modified leaves. The plant’s aboveground leaves emerge, and through photosynthesis, quickly produce enough sugars that the plant can sock away energy and go dormant before heat and drought set in. Even more impressive, daffodils have contractile roots that can pull them deeper into the soil if conditions near the surface become unfavorable. 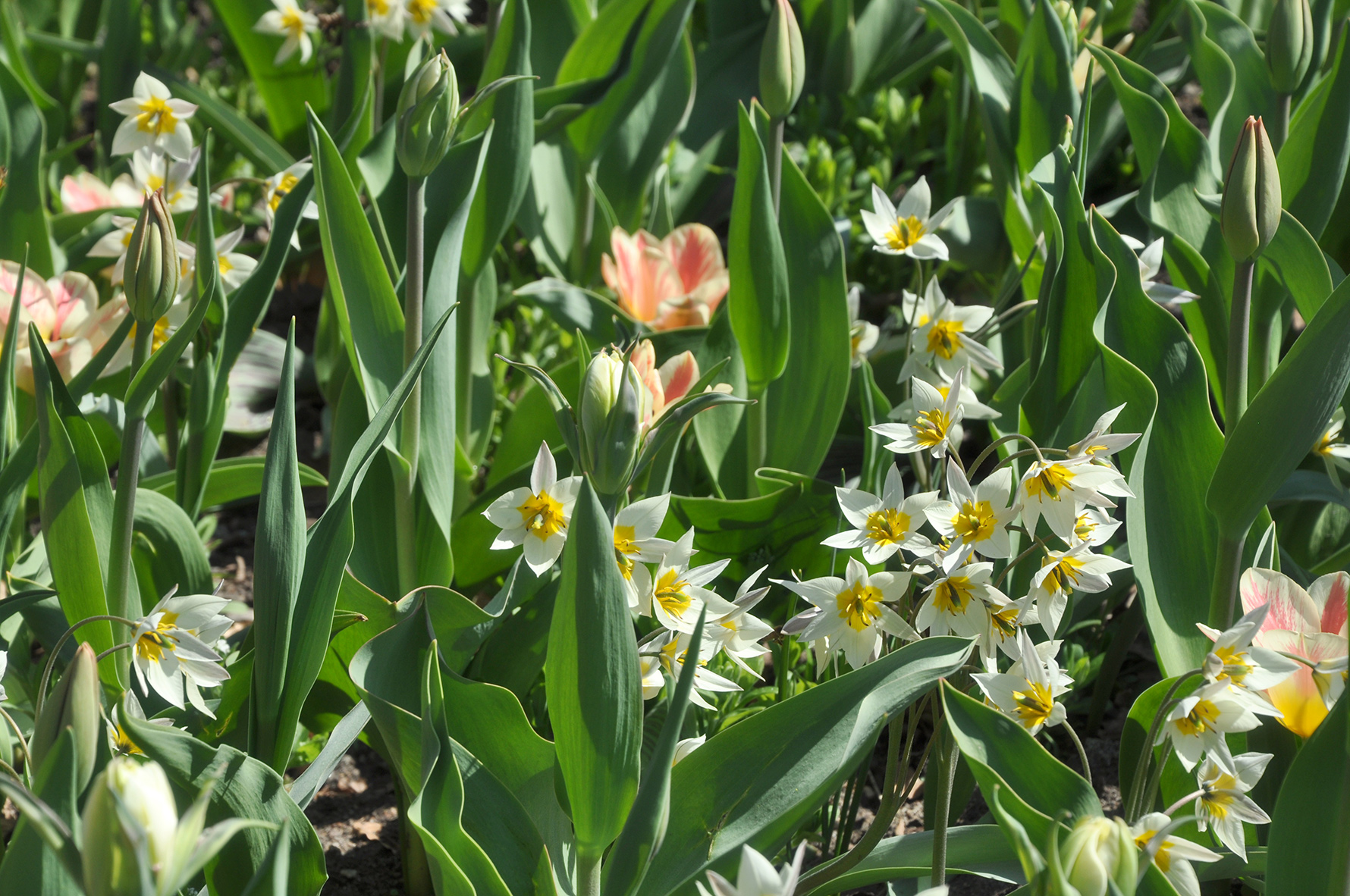 The Dutch are famous for their tulips. However, the tulips they breed are mostly native to parts of the Mediterranean, Middle East and Central Asia. In fact, the word tulip is derived from the Turkish word for turban. In these regions, wild tulips evolved to survive in harsh conditions, including rocky soils, high winds and drought. The Turkestan tulip (Tulipa turkestanica) demonstrates the remarkable resilience of the genus. Native to modern-day Kazakhstan, Kyrgyzstan, Uzbekistan, Turkestan, Iran and parts of Northwest China, this tulip thrives above the streets of Manhattan. The intense cycles of freezing and thawing that occur on the High Line’s bridge-like structure don’t faze it one bit.

Tulips were bred throughout the Ottoman Empire for elongated, dagger-like petals that were nearly closed. Very uncommon in wild species of tulips, these traits largely disappeared when human interest in them waned. In his book, The Botany of Desire, Michael Pollan writes “the only way we have any idea what made a tulip beautiful in Turkish or Dutch or French eyes is through those people’s paintings and botanical illustrations. That’s because a tulip that falls out of favor soon goes extinct, since the bulbs don’t reliably come back every year.” The Dutch had entirely different standards of beauty. When “tulipomania” swept the country in the 17th century, the most prized tulips displayed brilliant streaks of color on ruffled petals. Little did the Dutch know those bursts of color were caused by a virus that would ultimately kill the plant.

Our tulip is a bit more modest, and may not even be recognizable as a tulip. Tulipa turkestanica are short in stature, with blue-green strappy foliage and petals that are yellow at the base and white at the outer edge. Unlike modern tulip cultivars and hybrids, the flowers of T. turkestanica open entirely in full sun until the petals form an almost flat star shape, rather than opening only partially into the cup shape that we’re more familiar with in tulips. In fact, at a glance, these species tulips might be mistaken for miniature daffodils because of their coloring and shape.

What T. turkestanica lacks in typical tulip splendor, it more than makes up for in plentiful blooms and the ability to multiply both by bulb offsets and by seed. This is one of only a few tulip species that produces more than one bloom per stem, and in an ideal situation it will make as many as six or seven flowers per stem. Planted in a very sunny spot with sharply draining soil, T. turkestanica will not only bloom year after year, its bulbs will multiply, and you may even find tiny tulip seedlings sprouting nearby late in the spring. The seeds can be harvested from the brown pods that form after the flowers fade, but species tulip seedlings are very slow growing and it can take up to several years for the young plants to make flowers. The faster way to propagate these plants is to dig up the bulb and break off and replant the bulblets—or offsets—that grow off of the mother bulb. 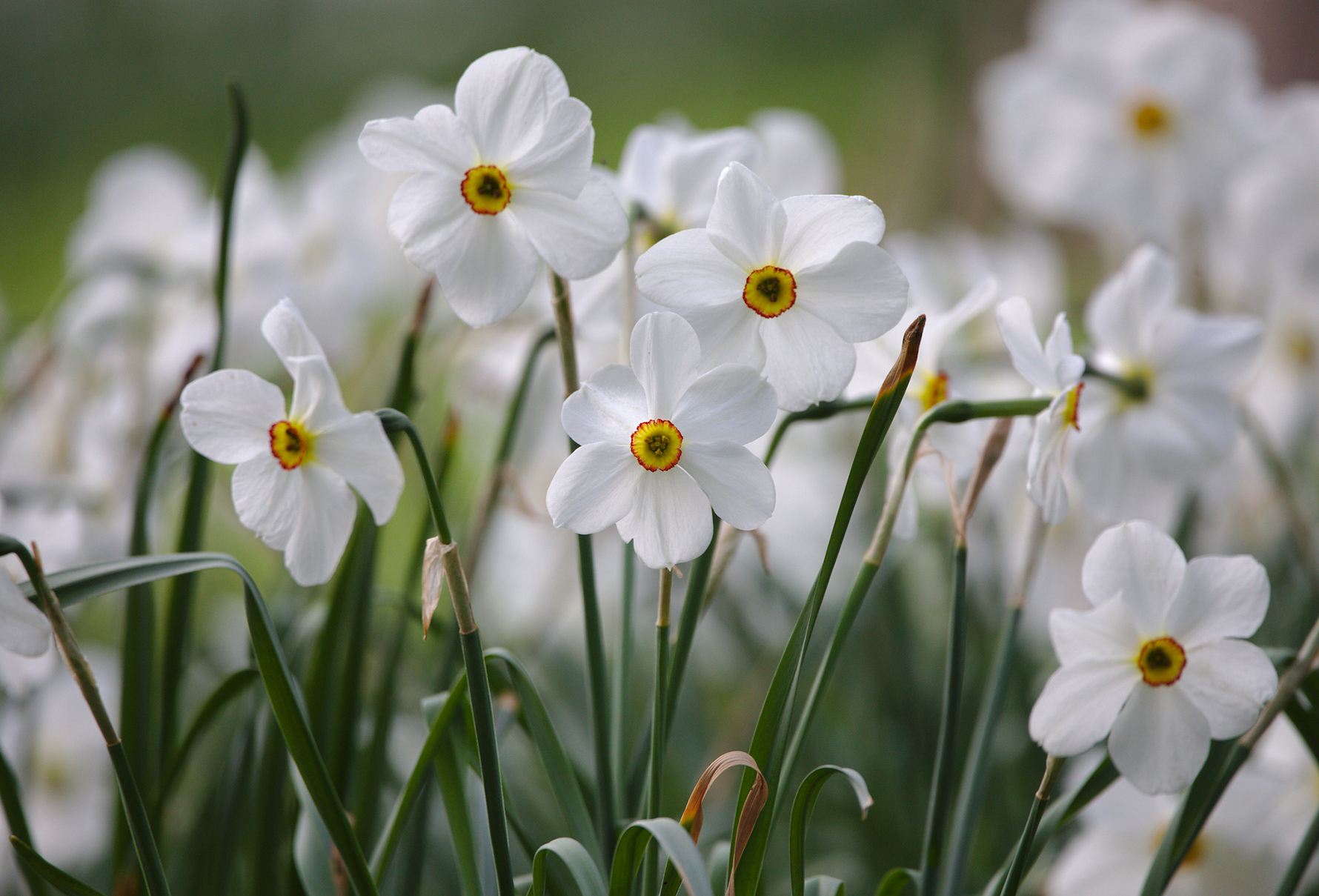 Although they never reached a fever pitch like their spring brethren, daffodils and narcissi have been much celebrated in art and literature. Narcissus poeticus was first described in writing by Theophrastus, who was a contemporary of Aristotle and sometimes known as the “father of botany.” Virgil wrote about N. poeticus in the fifth Eclogue, and it is mentioned in the medieval allegory “Roman de la Rose.” In Greek myth, Persephone and her friends were gathering Narcissus poeticus when Hades abducted her into the underworld. In one version of the Narcissus story, the goddess Nemesis both punishes the vain young man for his cruelty and recognizes his beauty by turning him into a flower that historians associate with our pheasant’s eye daffodil.

Native to Central and Southern Europe, N. poeticus has been cultivated for centuries for its essential oil, used to this day in many fine perfume formulas. Hardy and easy to grow, the rich fragrance and storied loveliness of this daffodil make it a favorite heirloom variety in gardens, and it has escaped cultivation and naturalized in much of the temperate, coastal United States.

Daffodils (Narcissus sp.), one of the most welcome signs of spring in New York City, are old-world plants. The genus probably originated in the Mediterranean and the modern species still bear traces of those origins. Today, the species that descended from that original line grow across much of Europe, often in regions with milder summers and colder winters than those along the Mediterranean. However, all 36 species still have the contractile roots, which served their ancestors well in hot, arid conditions. By contracting their roots these plants can pull themselves deeper into the soil, where temperature and moisture are more consistent than at the surface. Whether a harsh winter or a summer drought, daffodils have evolved to overcome tough circumstances.

Perhaps the daffodil and the tulip mimic the tough and resilient nature of its fellow New Yorkers. If you can, open a window and enjoy the ephemeral spring, remembering it will be back again next year.

HOW ARE THE GARDENS GROWING?

All along the eastern seaboard, honey bees, carpenter bees, and bumble bees are emerging and butterfly larvae are hatching on milkweed plants. They’ll flock to the flowers popping up and the trees, like the cherry blossom, that line the streets of Brooklyn. In a few weeks’ time, everything will be in full bloom, which in turn attracts more pollinators.

In the wild, every plant relies on a community of other organisms to survive. The shape and timing of spring blooms often depend on the types of pollinators who will be available to fertilize the flowers. For example, throughout its range, which stretches from New York State across much of the prairie, shooting star (Dodecatheon meadia) depends on “buzz pollination” by bees. Because of the unique shape of the flowers, the bees must shake out the pollen by vibrating their bodies against the downward-pointing tubes. When the bees move on to the next flower, they can’t help but brush their pollen-dusted bodies against the exposed stigma—an extension of the flower’s ovary—as they forage. 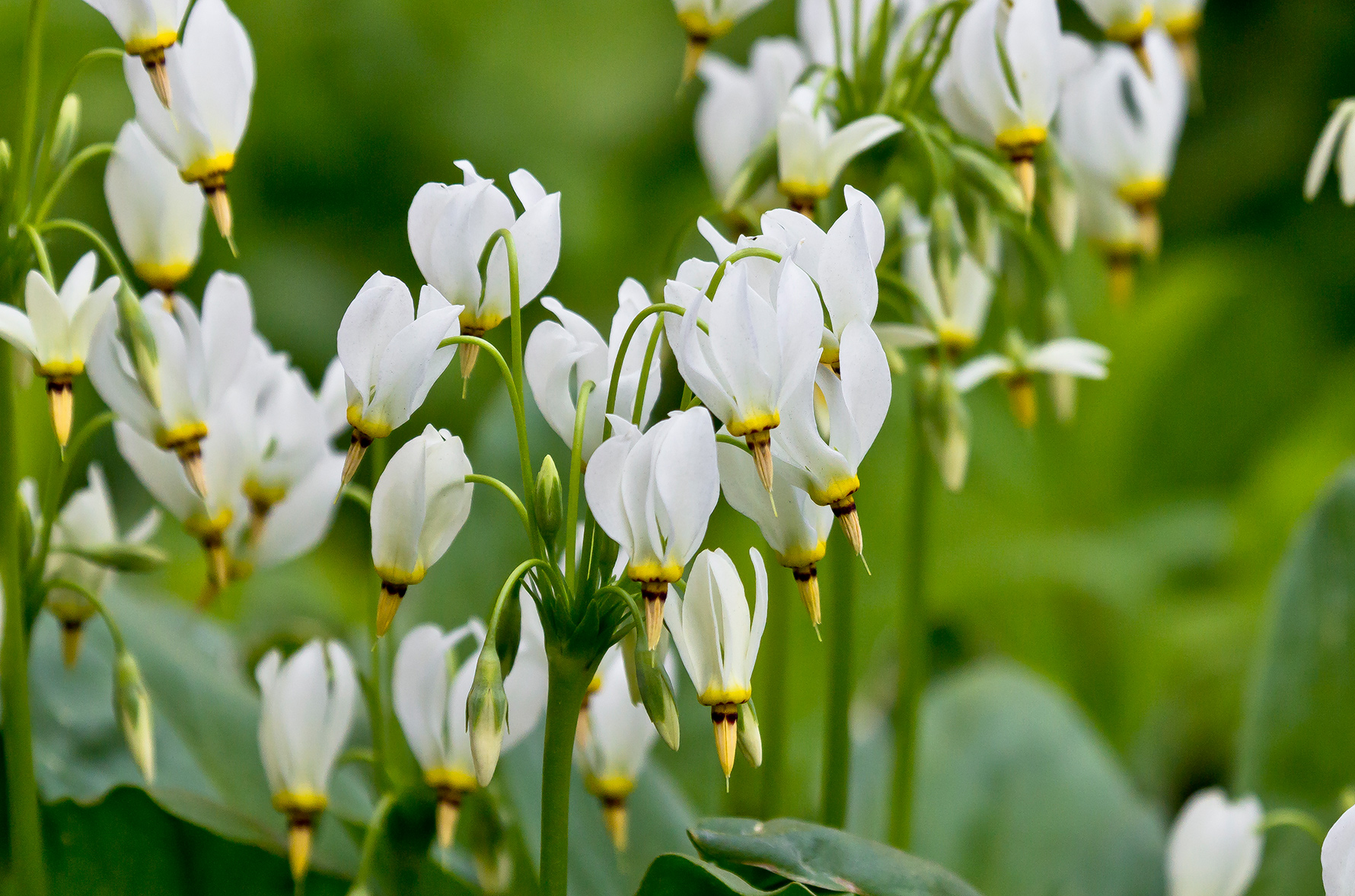 Plants can act as excellent indicators of ecosystem health. In many parts of our region, ephemerals have disappeared due to erosion, invasive plants, development, and other forms of disturbance. One of the most resilient native ephemerals of the Northeast is spring beauty (Claytonia virginica). This rather frail-looking wildflower withstands some grazing by cattle and intense competition from other plants. Spring beauty gets an early start, blooming in April, and sinking nutrients into its corm, which is a starchy modified stem. From buds on this underground storage structure “cormlets” develop. Clones of the parent plant grow from these cormlets, enabling a colony of plants to develop rapidly. 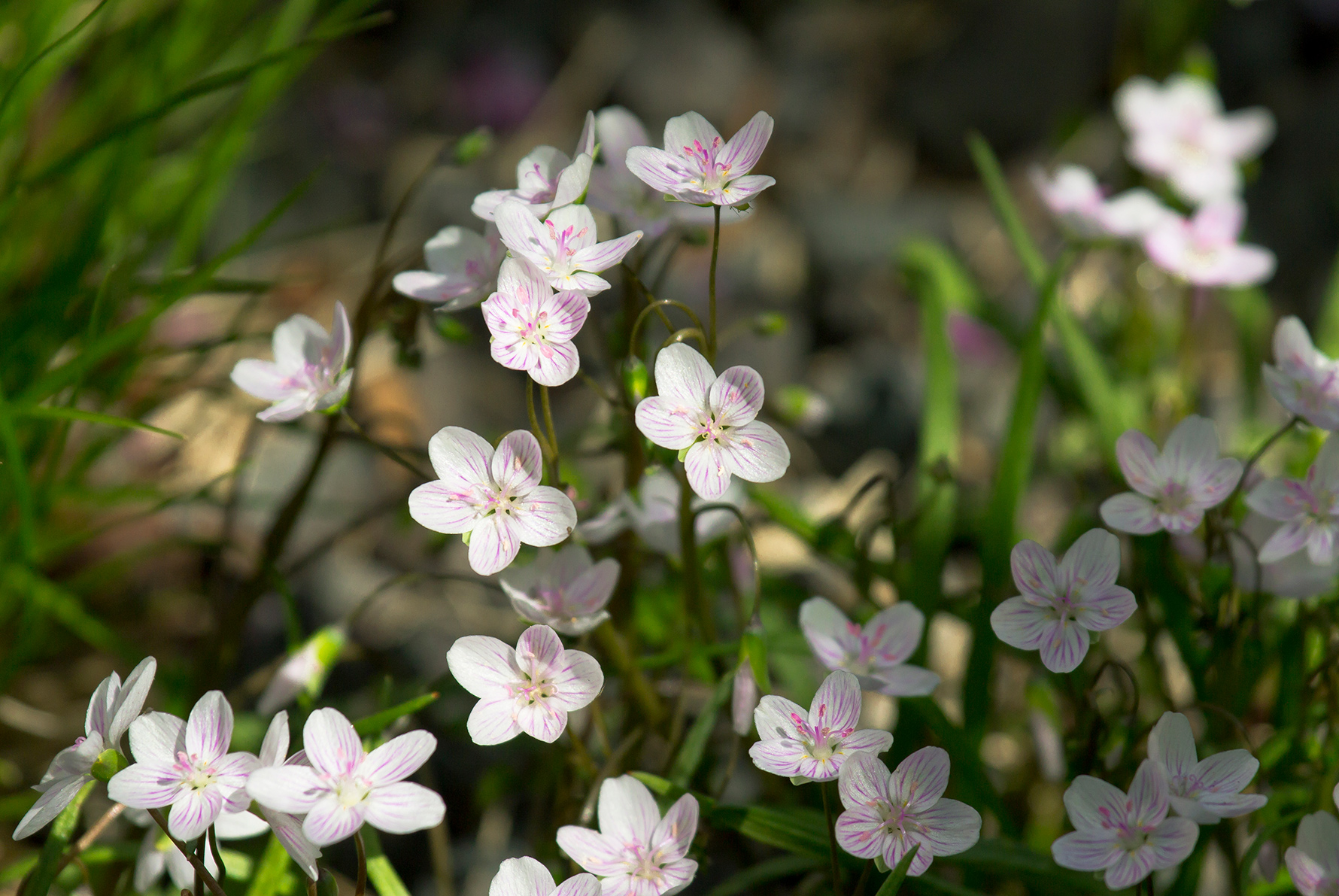 Each plant’s survival strategies evolve in response to the living and non-living elements of its environment. Different species within a genus often display radically different adaptations. Compare, for example the Erythronium species that grow in our Eastern woodlands with their West Coast relatives. Our local species of trout lily (Erythronium americanum) tolerates some habitat disturbance, in part because it can reproduce quickly through stolons, which are new stems that emerge from the bulb. Most of the Western species reproduce only by seeds. If pollinators are not available when the plant flowers, it cannot set seed. Furthermore, mature flowering plants take years to develop from seed, making it difficult for Western populations to rebound following habitat disturbance. 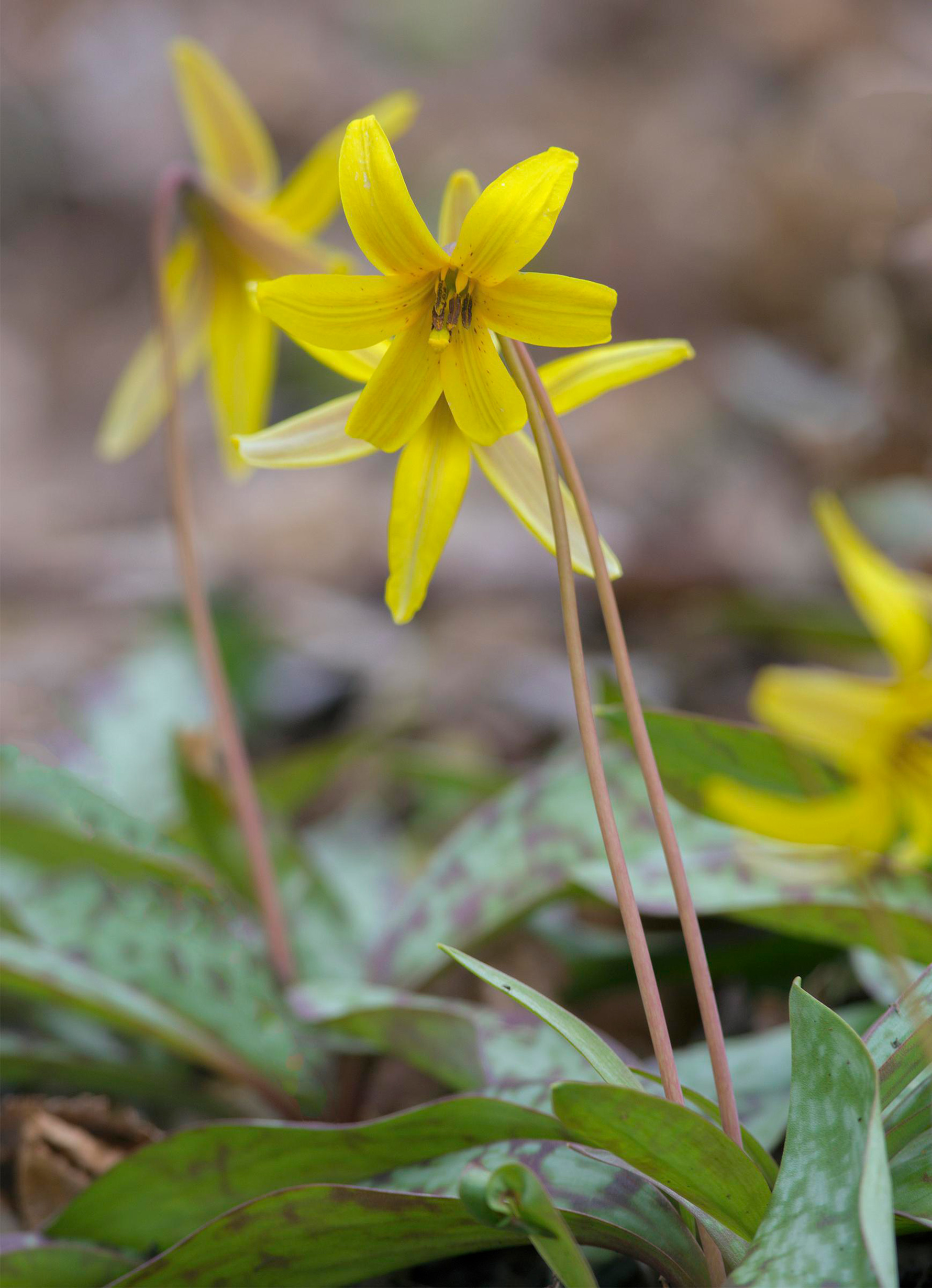 Land plants are 420 million years old. That’s enough time for these seemingly fragile living creatures to evolve into resilient, hearty greenery. Each year the perennials endure the seasons and their own lifecycle of bloom to dormancy. While many of the plants you see today aren’t that old, flowering and pollinated plants date to ~140 million years ago, they too have survived through adaptation. Most don’t rely on humans at all to survive. These self-sustaining creatures are inspiration for grit and spirit.

Locally, the High Line’s gardens were designed for resiliency. Our plantings designer, Piet Oudolf, chose a matrix style planting that creates a robust and diverse ecosystem, which is better for plant survival. Individual species were chosen based on their ability to thrive with minimal intervention, and thus mimic the self-seeded landscape that one grew wild on the former train tracks after they fell into disuse. Our eco-friendly practices, like composting and avoiding neonicotinoids, only improve our plants’ resiliency. They’ll be fine on their own, but we can’t wait for the day we’re reunited with our plants. As the Latin root for resiliency, “to leap back,” implies, we and the plants will surely bounce back with bravado. Until then, we like to imagine them growing a bit wild, letting their hair loose, so to speak, as nature does what it does.

Special thanks to our Presenting Green Sponsor TD Bank for their generous support of the park’s horticulture and sustainability practices.