Be a part of it—make a membership gift or special donation today and lead the High Line forward.

I'll be a member
I'll make
a donation >
Close Alert 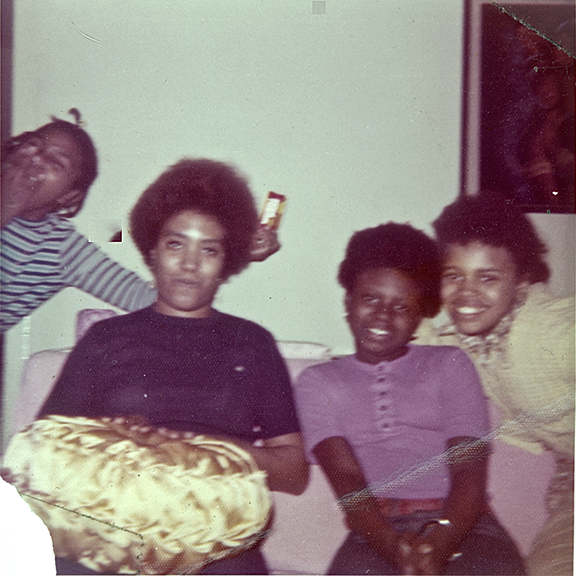 In 1962 Evelyn Andújar encouraged her mom to get on the list for Penn South, a new affordable housing complex going up nearby. But her mom didn’t want to move. “No mija,” she said. She preferred to stay in the Elliott Houses, which later became the Elliott-Chelsea Houses—a public housing development that occupies a full city block in the middle of Chelsea.

Here they had friends, family, community, and people to watch out for their kids. It was a place where people kept their doors open. “We only went from Apartment 1C to 1D,” Evelyn remembers. 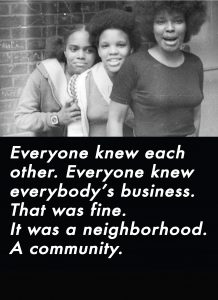 Darlene Waters also grew up in the Elliott Houses and lives there to this day. The above gallery features snapshots from her life.

As a teenager in the early 1960s Darlene went to dances put on by the Hudson Guild. The Hudson Guild was founded in 1897 to serve residents in the area.

The Penn South resident speaking in the accompanying video used to live in the Village in the 1970s and early 80s. The landlord ran a wholesale tobacco and candy business out of a space in Chelsea. While living in the Village she used to go running on the abandoned elevated West Side highway. Bands used to practice up there, and people would hang out.

Like many parts of the far West Side, “it was a space that was essentially vacant.”

Marilyn Rivera didn’t live in Chelsea; she was from the Lower East Side. But she came to Chelsea to go out. “That’s where all the afterhours were. I was always at an after-hours,” she says.

The clubs were in old abandoned warehouses and you had to know someone to get in. One was called “Crisco.” Marilyn would dance all night and sometimes leave at noon the next day.

Most of the warehouses in far West Chelsea were vacant. “It was dirty, there were rats,” Marilyn says. But a few were still active meat markets, nestled next to these 24-hour nightclubs. Ninety years prior in 1900 there were more than 250 slaughterhouses and meatpacking plants. This is how the neighborhood got its name—“the meatpacking district.”

Marilyn Rivera grew up spending the summers in Puerto Rico where her parents are from. “Vamos a chinchoriar” meant “let’s go bar-hopping.” The clubs in Chelsea, with their makeshift sound-systems and single light bulbs, were chinchorros to Marilyn. But did everyone call them that? “No, just me,” she says.

An anonymous resident of Penn South on what things used to look like in the neighborhood.

Marilyn Rivera talking about Chelsea in the 1980s and 1990s.

Armisha Mitchell works at the Hudson Guild, which is tucked inside the Elliott-Chelsea Houses development between a residential building and a public elementary school. Hudson Guild runs an active program for seniors, and so does Penn South. Neither Penn South nor the Elliott-Chelsea Houses were built intentionally as housing for seniors but over time they became Naturally Occurring Retirement Communities, or NORCs. Both developments were built in the mid-20th century as affordable housing for union workers and families. At Penn South, residents could buy apartments at below market rates. Once you were in, you were set. Marilyn Rivera, who won the lottery to move into Penn South, said her friend was on the waiting list to get an apartment for 17 years. Having an apartment at Penn South was considered lucky, something to hold on to.

The Elliott-Chelsea Houses had low rents that were guaranteed to stay low, great programs, and generations of families living there. People wanted to stay in those apartments. As people stayed, the percent of residents who were over 60 increased as well. It turned out Chelsea was a great place to age.

Darlene Waters and Florence Dent Hunter both raised their families in the Elliott-Chelsea Houses and have been friends since their children were young. Florence remembers when her daughter was two; she would stand in the yard of the Elliott buildings (which opened in 1947), and watch as the Chelsea buildings went up. Later her daughter would jump rope with the other kids in the courtyard. “They all grew up together and had a good time,” Florence remembers. Today, Florence and Darlene are both active at the Hudson Guild. Florence is involved with the theatre, and Darlene is president of the Elliott-Chelsea Houses Tenant Association. 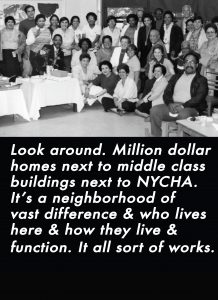 These Buildings Aren’t Coming Down

The Elliott-Chelsea Houses is a complex of six buildings, some as high as 21 stories with over 1,000 apartments. Penn South is even bigger with1022-story buildings. As our Penn South resident said, “you can’t really do much about this”—as in, these buildings aren’t coming down. Penn South also receives tax abatements from the City of New York, which allows their mortgages to stay low instead of increasing alongside the surging New York City housing market. In February 2017, the New York City Council voted to continue these tax abatements to Penn South until 2052.

Fine Fair on 104th Street and 3rd Avenue is located 80 blocks north and six avenues east in Evelyn’s home, in “El Barrio” or Spanish Harlem. But Evelyn says it only takes 20 minutes to get there by car. Her husband drives her there on Sundays. Evelyn’s mother got her used to going up there for groceries. “It has all the Spanish foods we like,” Evelyn says. And the prices are good. She can get a 20lb. bag of rice for $5.99 and a bunch of cilantro for $1. But really she goes for the meat, which she says, “is so fresh.”

A resident of Penn South on what things used to look like.

Throughout the spring and summer of 2018, Lizania Cruz ran a series of workshops at the New York City Lesbian, Gay, Bisexual, and Trans Center (The Center). She asked: “How can we tell the lesser known stories of LGBTQ+ Chelsea?”

Betty Yu looked to capture the labor stories of everyday people—past and present; union and non-union; informal and formal; nonprofit workers; immigrant, undocumented, and US born. Yu hosted a story circle with union organizers and members of the International Ladies Garment Workers Union.

Disabled artist Shannon Finnegan spoke with people with disabilities and those who live with mental illnesses about creating community on the West Side of Manhattan. She connected with the Center for Independent Living in New York, Fountain House, and Heidi Latsky Dance.