Be a part of it—make a membership gift or special donation today and lead the High Line forward.

I'll be a member
I'll make
a donation >
Close Alert

Day 1 at The Center on 208 West 13th Street, between 7th and 8th avenues, on the border between the West Village and Chelsea, two blocks from the New York City Google campus, one block from the site of now-closed St. Vincent’s Hospital, once home of the country’s first and largest AIDS ward, five blocks from the historic Stonewall Bar, and two blocks from the A train.

Lizania Cruz was meeting youth from The Center for the first time. They stood in front of a table covered in paper, magazines, scissors, markers, and stencils. Cruz had a question for the group: “How did you get here?” she asked them. The answers came in collages. Scroll through the above gallery to view the collages.

Led by Ken Lustbader and Amanda Davis from the NYC LGBT Historic Sites Project, youth from The Center visited Bayard Rustin’s former home in Chelsea. He bought his Penn South apartment in 1962, the year the housing complex opened. The following year he served as deputy director of the historic 1963 March on Washington, where Martin Luther King Jr. delivered his “I Have a Dream” speech.”

I didn’t know there were so many important gay people of color in our history,” one of the young people remarked as they stood outside Bayard Rustin’s former apartment taking pictures.

The next stop on this walking tour: the Sylvia Rivera Food Pantry at the Metropolitan Community Church on West 36th Street.

For one of the youth on the tour, the picture of Sylvia Rivera marching with her friend Marsha P. Johnson at the 1973 Christopher Street Liberation Day Rally, impacted his thinking and legacy. “I learned that I have the privilege that I do,” he wrote, “because of trans women and men of color.”

Sylvia Rivera was an iconic leader in gay and trans liberation struggles, and founded STAR, Street Transvestite Action Revolutionaries, with Marsha P. Johnson in 1970. Throughout her life she fought for homeless queer youth, sex workers, and incarcerated trans people—people she thought the mainstream LGBTQ+ movement didn’t care about. Sylvia volunteered at the food pantry at the Metropolitan Community Church (MCC), a church which opened in 1972 as a welcoming place for the LGBTQ+ community. In 2003 MCC opened Sylvia’s Place, a homeless shelter for LGBTQ+ youth. They also renamed their food pantry in her honor.

Youth from The Center and members of SAGE came together in the spring of 2018 for conversation and poetry. This was an inter-generational meet-up. In this clip from Barbara Police, we hear how language and self-identification have changed in LGBTQ+ communities over the years. 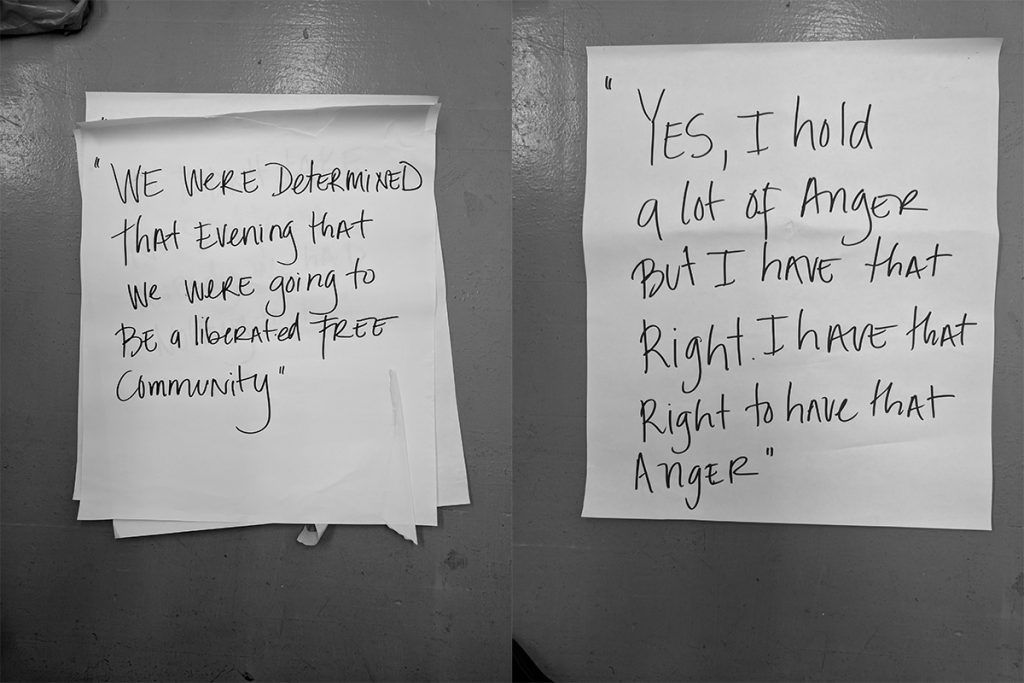 These quotes from Sylvia Rivera complicate things. They come from a talk Rivera did in 2001 at The Center. That day she had to get a special permit to enter the building because she’d been previously banned for protesting what she perceived as The Center’s indifference to homeless queer youth. The anger she mentions is in this case directed at the mainstream LGBTQ+ movement. In reference to these dreams of being a liberated free community, she says: “You have acquired your liberation, your freedom, from that night. Myself, I’ve got sh–, just like I had back then. But I still struggle, I still continue the struggle.”

For this workshop, Lizania invited poet and educator Stephanie Alvarado to collaborate on facilitating the workshop. Together they posted these and other quotes from Rivera on the wall, and asked the youth and folks from SAGE to use them a springboard for their own reflections. Together, they created a collective poem — inspired by Rivera and inspired by their own experiences as LGBTQ+ New Yorkers.

Betty Yu looked to capture the labor stories of everyday people—past and present; union and non-union; informal and formal; nonprofit workers; immigrant, undocumented, and US born. Yu hosted a story circle with union organizers and members of the International Ladies Garment Workers Union.

Disabled artist Shannon Finnegan spoke with people with disabilities and those who live with mental illnesses about creating community on the West Side of Manhattan. She connected with the Center for Independent Living in New York, Fountain House, and Heidi Latsky Dance.

Alicia Grullon worked with the senior programs at Hudson Guild and Penn South to untangle political issues around development, displacement, culture, housing, and long-standing communities. Grullon talked to long-time residents of Chelsea who have experienced all of the neighborhood changes.