Plant of the Moment: Purple Milkweed 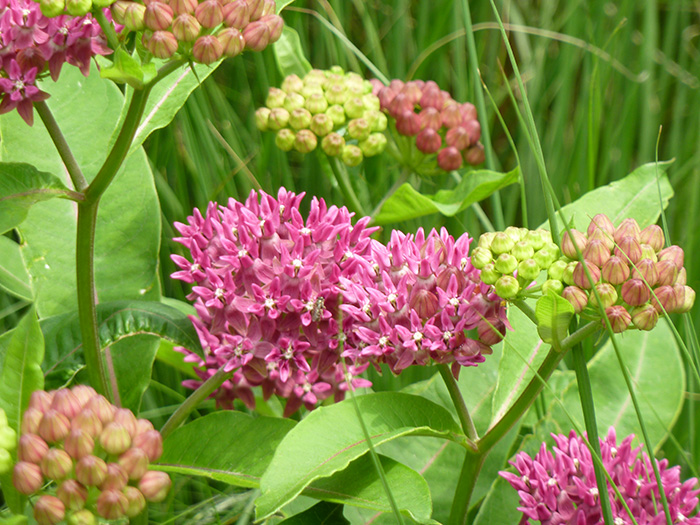 In addition to being an important crop, purple milkweed (Asclepias purpurascens) is a particularly handsome plant. Photo by the High Line

For the majority of the modern history of cultivated gardens and the era of large-scale agriculture in the United States, plants in the genus Asclepias, the milkweeds, have been considered just that—weeds. It’s a fair perception. These are plants that bear seed pods that split open to release thousands of seeds, each attached to dandelion-like fluff that help them to drift in the breeze for some distance before settling to the ground and germinating at an alarmingly high rate. Milkweeds can quickly take over a garden and are considered a scourge in farm fields. Asclepias species, however, have an important place in our gardens, and even in our farm fields.

Many people are familiar with the fact that milkweeds have an important niche in the ecosystem as the host plants to monarch butterflies. It’s been in the news a lot in the last few years because of the serious drop in numbers of monarchs observed on their usual migratory routes. The drop in butterfly populations is blamed largely on loss of habitat—new methods in weed control are more and more successful at keeping milkweed from growing among crops in fields in the Midwest. What people are less familiar with is the fact that milkweed itself could prove to be a valuable crop with a number of uses. 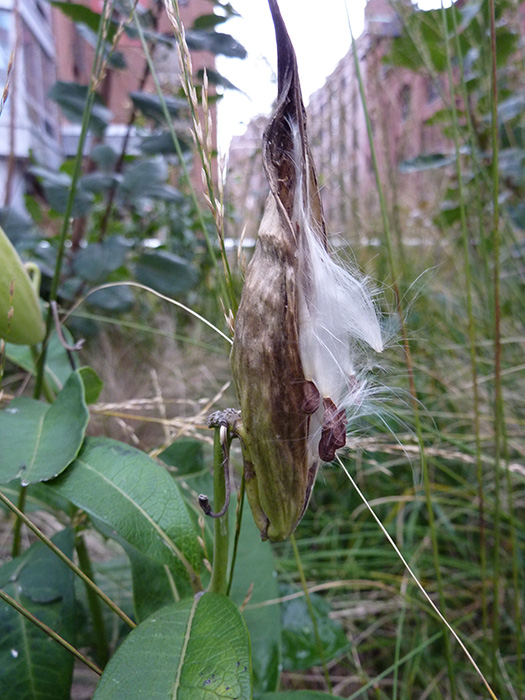 In the late 1930s, Dr. Boris Berkman, a physician and inventor, made a list of more than twenty uses for Asclepias, including textiles, cellophane, and oil. Another of his ideas was to use the floss from the seeds as filler for life preservers. This suggestion was actually put to good use in World War II, when the U.S. Navy called on farmers in rural Michigan to harvest more than 200,000 pounds of milkweed floss to use in lifesaving gear for soldiers. Milkweed may also have modern medicinal uses. One species was listed in the U.S. Pharmacopoeia as late as 1936 as having anti-spasmatic and anti-rheumatic properties, among others. Even more recently, in 2006, researchers resurrected one of Berkman’s ideas and found that a mix of goose down and milkweed floss was as effective an insulation as 100% down in jackets and coats.

And, let’s not forget that the milkweeds are very beautiful plants for the garden. The High Line hosts several species milkweed, but Asclepias purpurascens, purple milkweed, is a particularly handsome species. The plants grow up to three feet with large oval leaves on sturdy, upright stems. It is very similar to common milkweed (Asclepias syriaca) in growth habit and foliage, but the flowers are a deeper rosy purple, growing in showy round clusters. Unlike other species, it prefers a little dappled shade to full sun, making it a more realistic choice for many urban gardens, and it doesn’t seed around quite as prolifically as some other milkweeds. Purple milkweed is, of course, an especially good choice for gardeners who are concerned with being good stewards to monarch butterflies, but the plants are also good forage for many other pollinators.

Between aesthetics, commercial uses, and the importance of Asclepias species in saving on of our best loved native butterflies, there are all sorts of reasons to change those old perceptions of milkweed.

WHERE TO SEE THIS PLANT

Asclepias purpurascens, purple milkweed, can be found on the High Line between West 15th and West 17th Streets.