Plant of the Moment: Compass Plant 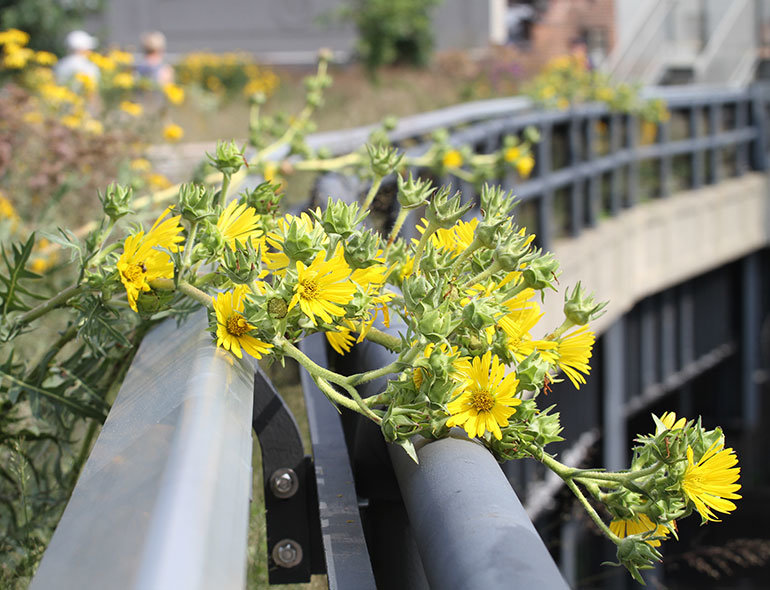 In the grasslands of the High Line between Gansevoort and 20th Street, it’s impossible to miss the compass plant’s lofty stalks and dense yellow blooms. A member of the Asteraceae family, the silphium laciniatum’s impressive height sets its flowers against the sky like daylight stars. A clue to a more substantial relationship to the sun than simply its sunflower-like appearance lies in the compass plant’s name, which has to do with its use as a navigation tool by early European settlers of the Great Plains.

When a new leaf emerges, it grows any which way it pleases; but within a few weeks of sun exposure, it twists clockwise or counterclockwise into a vertical position pointing north, south, east, or west to protect leaves from too much exposure during the midday heat. This results in east-west facing leaves using water more efficiently than those that face north-south, as well as being an accurate compass for travelers. Native American peoples also used the silphium as an edible by chewing the bitter sap, using parts of the plant as tea, and burning the dried roots for protection during lightning. In his classic conservation text A Sand County Almanac, Aldo Leopold dedicates much of the chapter on July ecology to the Silphium and the significance of its slow disappearance from American prairies as an augur of the ascendance of the mowing machine. “With [the silphium] will die the prairie epoch,” he wrote.

The compass plant is native to the central United States and eastern Canada, and is a valuable food source for sparrows and juvenile livestock. Songbirds find a sturdy perch in the stalks, and eastern kingbirds can be seen scouting the flowerheads for grassland insects. Owing in part to the compass plant’s spreading relatively non-aggressively by seed, it’s endangered in several states, and needs seed stratification to be propagated.

PLANTING TIP
Collect seeds in late August or September and nick the seed coat with a sharp knife to stratify before planting. Allow a few years for the plant to establish a sturdy root system before expecting flowers.

WHERE TO SEE THIS PLANT
Washington Grasslands
Chelsea Grasslands

Our horticultural team counts on members and friends like you to help keep the High Line beautiful and thriving. Join our community of supporters who play an essential role in the High Line’s most important gardening projects – become a member of the High Line today!