Every spring, Friends of the High Line gardeners and volunteers work to trim back grasses and perennials throughout the entire park as part of our annual Spring Cutback efforts. This year, we finished in record time with the help of some unique volunteers: a mighty team of alpacas. 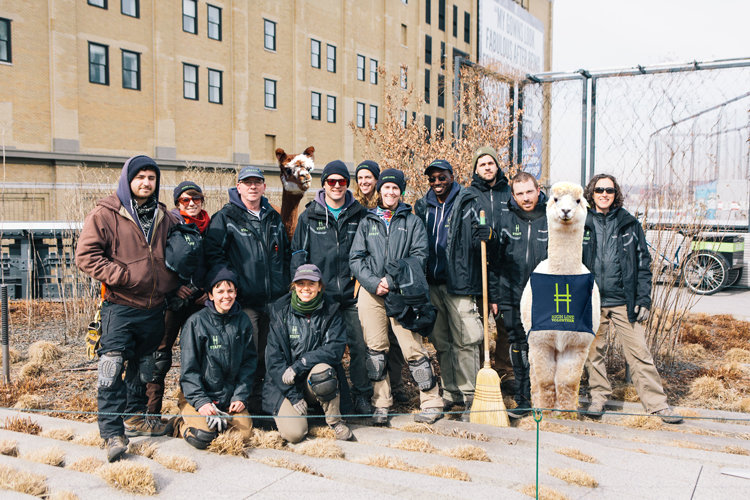 High Line gardeners pose for a shot with Peter Stuyvesant (left) and Fiorello La Guardia (right) prior to the alpaca team’s first shift.

Originally from a farm outside of Rhinebeck, NY, the park’s four Peruvian alpacas worked for three hours each night after the park closed, munching on specific plants at a faster rate than even our most skilled gardeners can cut them. They lived for three weeks in a specially designed paddock on the Spur at 10th Avenue and 30th Street, and two trained alpaca handlers worked side-by-side with our horticulture staff to identify key areas of the park for them to trim. The handlers also determined which plants appealed most to the alpacas’ unique tastes.

With an average alpaca eating two pounds per 125 pounds of body weight per day, our team of livestock—nicknamed Jane Jacobs, Robert Moses, Peter Stuyvesant, and Fiorello La Guardia by our Green Council members—was able to make a significant dent in our cutback efforts. And because alpacas aren’t particularly picky eaters, serving as High Line munchers was a logical choice, said Hagrid Vertin, a High Line gardener. 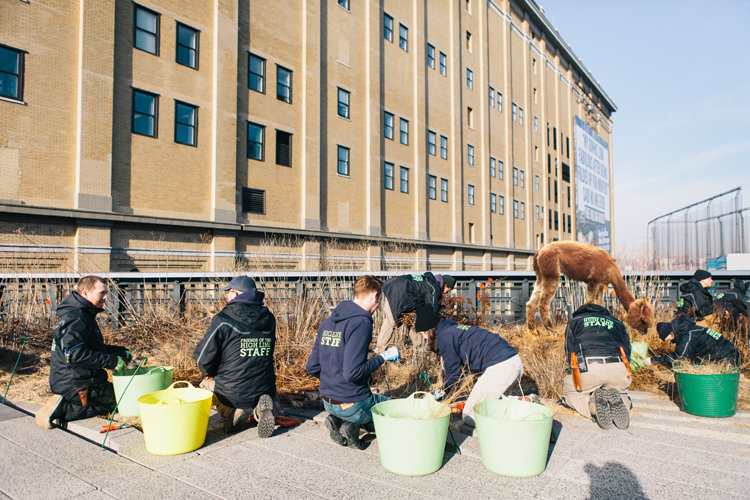 Robert Moses happily munches on grass alongside the rest of the Spring Cutback team. Affectionately known as Boppin’ Bobby by the High Line gardeners, two staff members offered to adopt him at the end of the project.

“We’re always looking for ways to work as efficiently as possible during Spring Cutback, and the alpacas were really key members of our team this year,” Hagrid said. “Also, the Friends of the High Line operations and horticulture staff just fell in love with them. We hope they come back next year.”

Alpacas happily consume grass, hay, and a variety of plants, although daffodils, purple-flowered onions, and wild tulips are poisonous to them. During their stay on the High Line, the health and safely of these animals was our highest priority, and our horticulture team worked with the handlers to tag certain plants to make sure the animals steered clear of them. 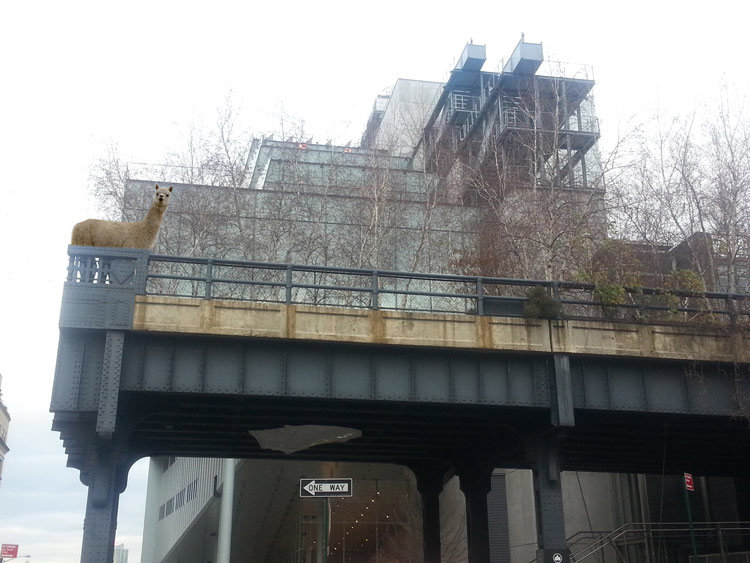 Prior to her Thursday shift, Jane Jacobs takes a moment to ponder life from the south end of the High Line.

The alpacas were photographed and Instagrammed multiple times from street level, and one photographer noted that the alpaca looked like a type of “High Line Loch Ness Monster.”

Since the animals favor the use of a communal dung pile, the park’s maintenance team set up a semi-official alpaca relieving station to the north of the restrooms at West 16th Street. The area was cleared every night after the alpacas completed their shifts and returned to their paddock, and some of their dung will be mixed into the organic fertilizer used in High Line planting beds.

According to Hagrid, the only major issue with the alpacas was staying out of the line of fire when the animals got angry—and spit at each other.

“Luckily their spit washes off, but it isn’t fun to be on the receiving end of an angry alpaca,” Hagrid said. “When Peter Stuyvesant got a certain look in his eye, we all knew to run.”

The alpacas are now back in their home paddock in upstate New York, but their contributions are visible to any High Line visitor—and to future visitors of the
High Line Shop. While living on the Spur, the alpacas were shorn for their fleece, which will be knitted into limited-edition Friends of the High Line sweaters. These special products will be available in-person and online in September.

“It’s a way the alpacas will always stay with me,” Hagrid said.