Plant of the Week: Twinleaf

Jeffersonia diphylla, also called twinleaf, can be found at the Gansevoort Woodlands and Tiffany & Company Foundation Overlook. Jeffersonia was named by the botanist Benjamin Smith Barton to honor the third President of the United States, Thomas Jefferson, and it is in the Berberidaceae family (barberry). There are only two species in the genus Jeffersonia, the other is Jeffersonia dubia, which can be found in forests in Japan and has a purplish flower. Jeffersonia diphylla is a rare wildflower native to Eastern North America. This plant is endangered in New York, Georgia, Iowa, and New Jersey, so it may be difficult to find them in the wild. They do best in the deciduous forest floor, blooming before trees develop their canopy in the spring. 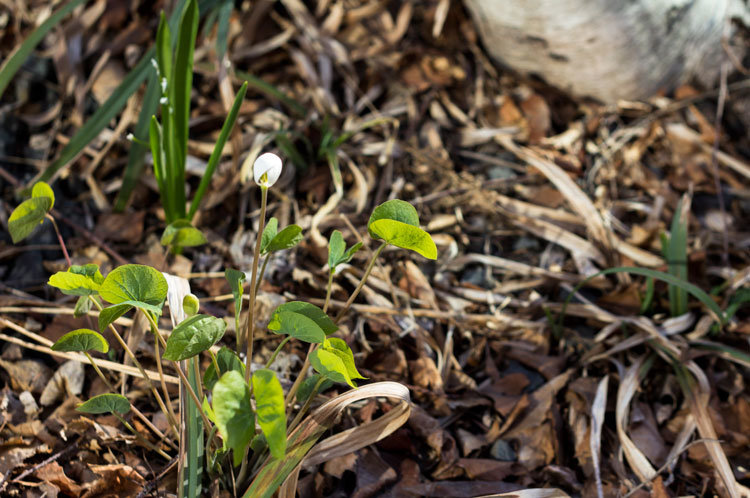 Green leaves emerge from long reddish stalks which can be 6 -10 inches tall and eventually could reach 18 inches by the time seedpods mature in summer. The butterfly-looking leaves have two identical twin lobes. The flower has eight white petals and looks similar to Sanguinaria canadensis (bloodroot), blooming in mid-April to May before the leaves expand. The flowers only last for a few days! But even after the bloom is over, their unique seed pods still entertain us. Some of the flowers have already finished blooming and have seed pods. People say the seed pods look pear-shaped, but I think they look similar to jalapeño peppers. They have lids, which is very unusual. When they mature, the lids open up and you can see the seeds inside.

Seeds have to be collected about a month after the flowers bloom, and they have to be sown right after they are ripe and cannot be allowed to dry out. It takes about 4 to 5 years for the plant to get to the stage where it will flower. Dividing rhizomes for propagation is best in the fall. They prefer slightly alkaline soil rather than acidic soil, and are hardy from USDA Zone 4 to 8.

WHERE TO FIND THIS PLANT:

Gansevoort Woodland at the Tiffany & Co Foundation Overlook, at the southern end of the High Line, between Gansevoort St. and 12th St.

The High Line’s planting design is inspired by the self-seeded landscape that grew up between rail tracks after the trains stopped running in the 1980s. Today, the High Line includes more than 500 species of perennials, grasses, shrubs, and trees – each chosen for their hardiness, adaptability, diversity, and seasonal variation in color and texture. Some of the species that originally grew on the High Line’s rail bed are reflected in the park landscape today. Every week we share one of our gardeners’ current favorites with you.