Habitat in the Sky: Studying Wild Bees on the High Line

By High Line and the American Museum of Natural History | April 23, 2019

As the city embraces spring and lures people outside with warmer weather and longer days, the High Line is expecting a different kind of local visitor. From early spring to late fall, wild and native bees come to collect pollen and nectar from thousands of blooms along the park’s 1.45 mile stretch, playing a vital ecological role in our landscape.

While we are familiar with the popular European honey bee and the North American bumble bee, we were curious to learn if any of the 400+ wild species found in New York State were foraging or nesting in the park. How is the High Line as a habitat? As part of a larger initiative to quantify the environmental benefits of the High Line (stay tuned for more posts about this), planning and design manager Nicole De Feo, reached out to entomologists at the American Museum of Natural History to ask for help. 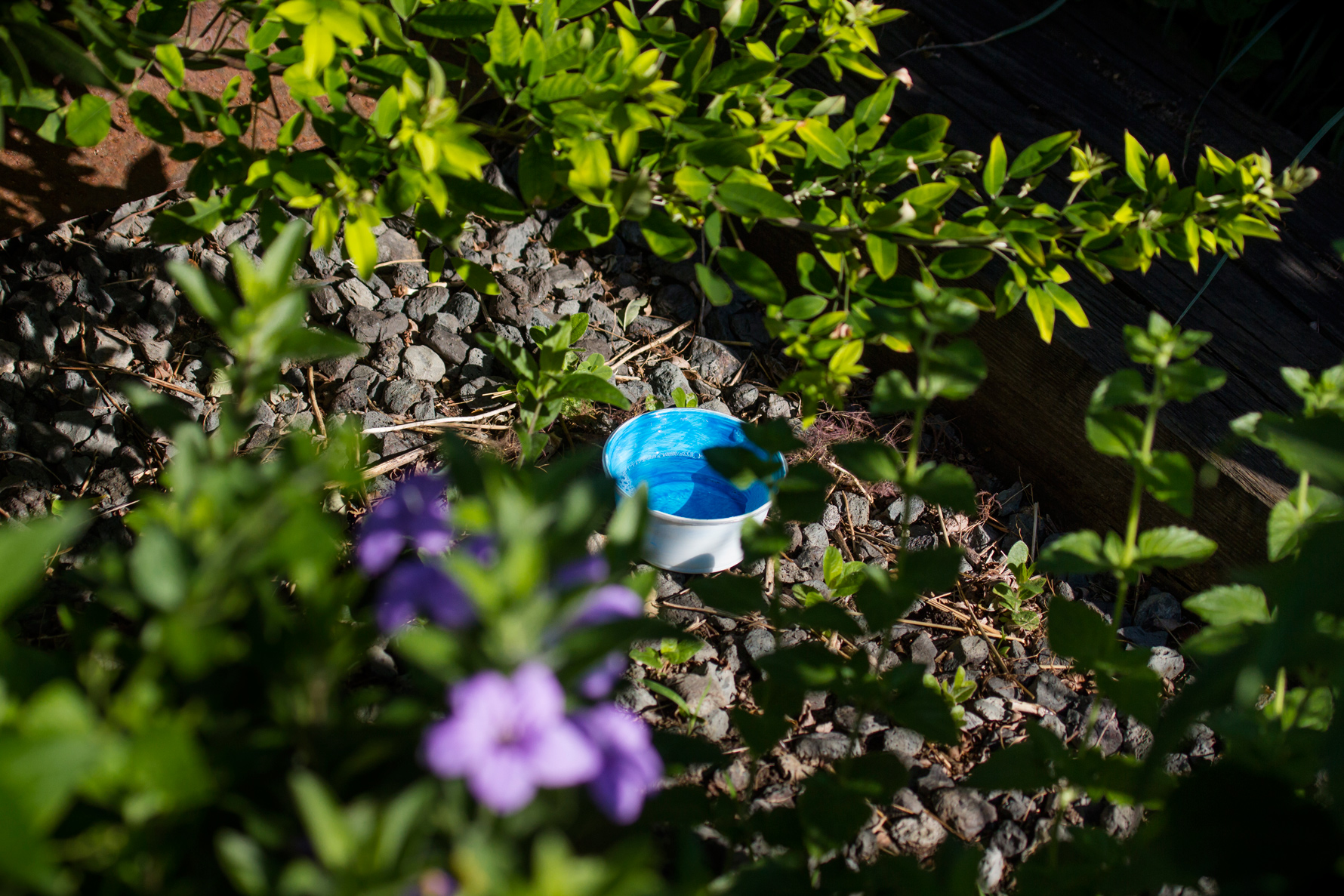 A bee bowl placed in the High Line garden beds among blooms is painted to visually attract bees. A drop of soap weakens the surface tension of the water, trapping bees and other insects as they land.Ayinde Listhrop

In 2017, Sarah Kornbluth and Corey Smith answered her call. Smith, a specialist in the Division of Invertebrate Zoology, and Kornbluth, a field associate, are used to traveling the world to collect bee specimens for the museum’s vast collection (one of the largest in the world at approximately 750,000 specimens representing just about all known 20,000 species of bees). They thought the opportunity to look for bees in their own backyard would offer critical understanding of how urban parks like the High Line can support these tiny New Yorkers. They worked with De Feo and longtime High Line gardener and naturalist Maryanne Stubbs to propose a seasonal survey that would develop a better understanding of how the High Line serves as a bee habitat. Every other week from April to October, Smith and Kornbluth visited the park to net bees they found among the floral blooms, and Stubbs set out bee to trap bees between visits, moving them throughout the park to follow the blooms.

Given that half of New York’s bees require about a foot of soil to dig their nests, Kornbluth and Smith surmised that these ground nesting bees would not find ideal habitat conditions in the park’s built up landscape. Garden beds in the park average between 18-24 inches deep and include typical green roof layers like sand, gravel, filter fabric, and an eggcrate-like water retention layer that slows the runoff of rainwater—essential for keeping the plants here happy. 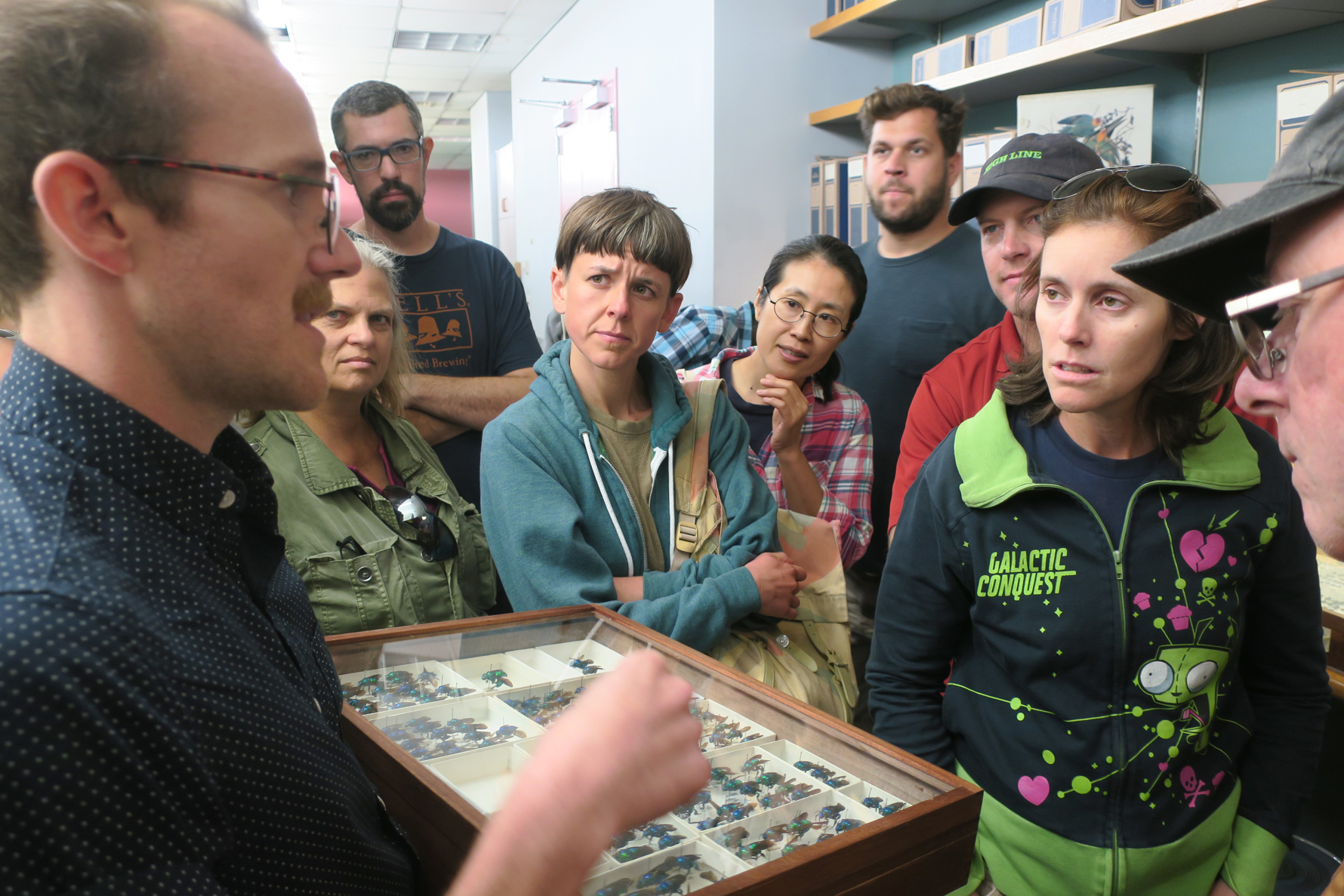 Corey Smith (left) of the American Museum of Natural History highlights bee specimens from the museum’s collection during a visit with High Line staff.Nicole De Feo

In the presence of millions of visitors, active construction sites, and on a park 30 feet from the hustle and bustle of New York City, they did find a variety of bee species, tallying 33 different species in total from hundreds of specimens collected, accounting for about half of all recorded species in Manhattan. The majority of the species they identified are cavity nesting—requiring hollow plant stems to build their nests instead of feet of undisturbed soil. These findings delighted the Horticulture team as Kornbluth and Smith advised how we could modify our annual Spring Cutback practices by leaving stems standing into spring to allow nesting bees to emerge. Since the study was completed in 2017, the Horticulture team has been leaving 1-2 feet high standing dead vegetation of a few plant species throughout the park to provide additional bee habitat.

Every species of bee has its own way of building nests. Often, closely related species nest in similar ways. When thinking about bee homes, the first thing that comes to mind for many people are the iconic honey bee hive boxes with honeycomb. However, most bees are solitary and thus don’t live in busy nests full of related workers with a single egg-laying queen. In the exploration of the wild bee species that live and forage at the High Line, Kornbluth and Smith found mostly solitary bees that dig their nests in soil or find pre-existing cavities in soil or wood. 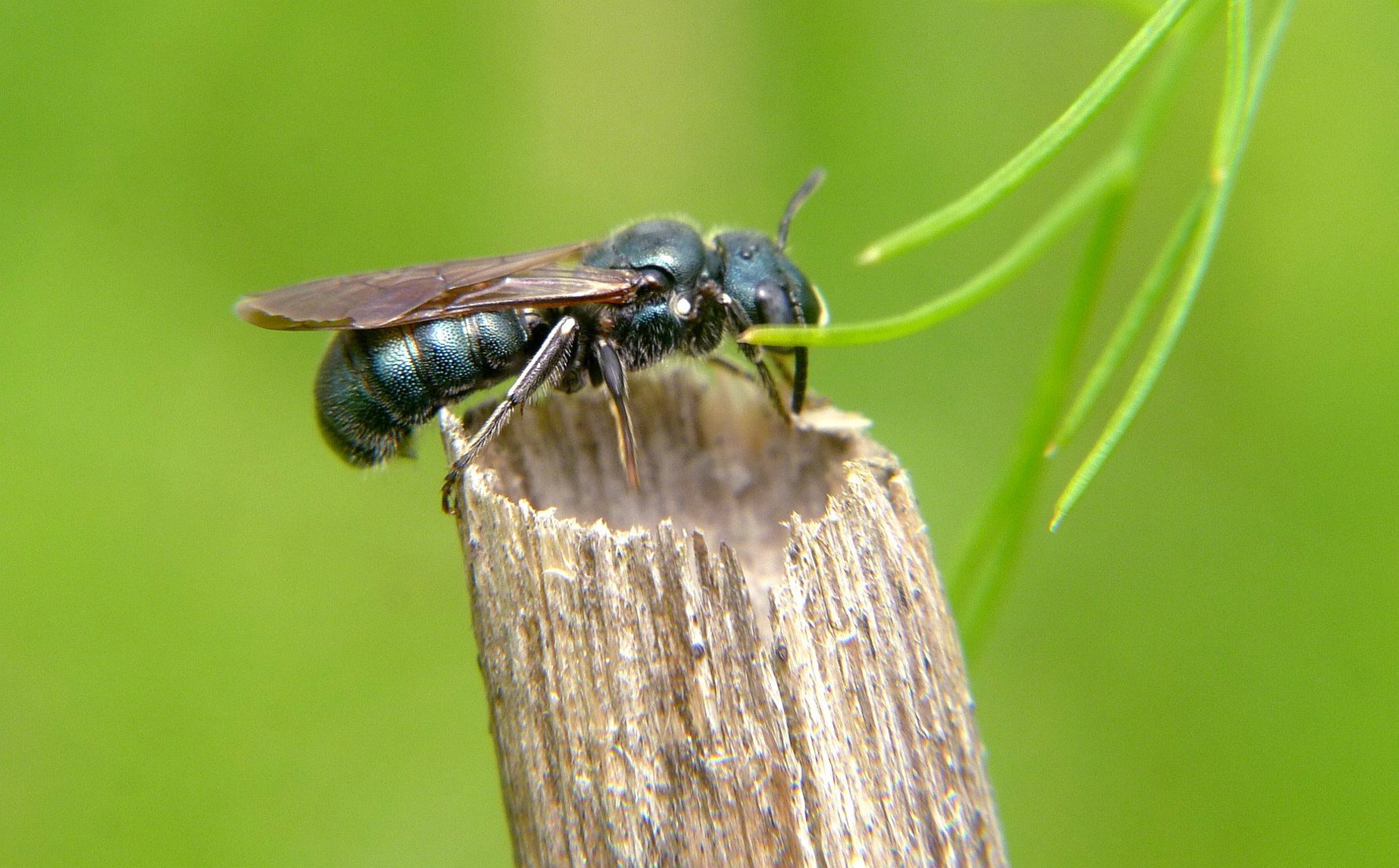 A small carpenter bee (genus Ceratina), atop a pithy stem.el.gritche via Flickr

Small carpenter bees (Ceratina) engage in a different strategy: they make their nests in the centers of small pithy stems. Pith is the material in the center of an herbaceous or young woody stem. When you cut a stem while pruning in a garden or trimming flowers for a vase, the exposed section reveals a different kind of tissue in the center of the stem. This is the pith. It’s composed of parenchyma cells that are softer than the surrounding exterior of the stem. Female small carpenter bees likely prefer plants with long narrow stems where the diameter of the nest cavity will be about 3-4mm and the length of the nest about 1-1 ½ feet), but will nest in others if their preference is unavailable. 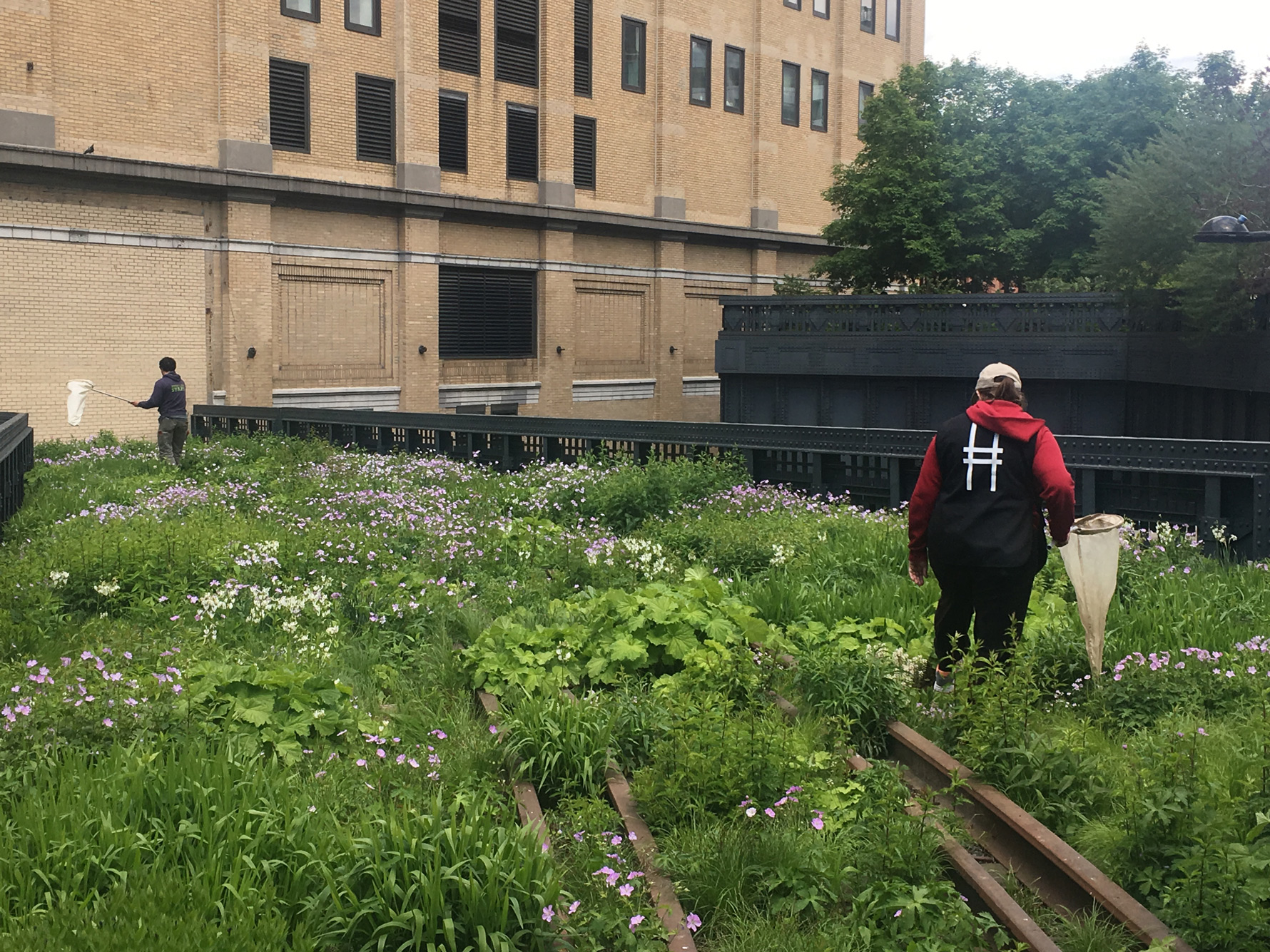 Sarah Kornbluth of the American Museum of Natural History looks for bees on the Northern Spur Preserve on the High Line.Nicole De Feo

Similarly to butterflies, bees are holometabolous, meaning they undergo complete metamorphosis, progressing through four distinct phases in their life-cycle (egg, larva, pupa, and adult). As larvae, bees typically progress through five different stages (known as instars), increasing in size at each molt (or shedding). Once they consume the entirety of their pollen provisions they metamorphose/pupate into adults. Female small carpenter bees spend the winter after metamorphosis hibernating in special stem chambers called hibernacula. They emerge in the spring to mate and transform their old winter resting places into new nests for themselves and their young. At the end of each season, the previous generation dies.

Female masked bees (Hylaeus) also make linear nests in diminutive cavities. However, unlike the small carpenter bees, masked bees can use a variety of cavities, as long as the dimensions are within certain parameters, including centers of stems, nail holes, cavities abandoned by other organisms, gaps in corrugated cardboard, and centers of bamboo garden stakes. Masked bees can also use cavities that are vertical or horizontal. Once a female masked bee finds a suitable nesting site, she produces cells, provisions them with pollen, and lays an egg in each one. These solitary bees overwinter as prepupa and don’t metamorphose until spring.

In their nest making, masked bees exhibit a nesting behavior unique to their larger taxonomic group (Colletidae). While constructing cells, the female emits a clear liquid from her mouth with which, using her proboscis (a straw-like appendage used for sucking and chewing), she thoroughly paints all over the inside of each cell. The liquid dries into a cellophane-like coating that adds a layer of protection for her young. 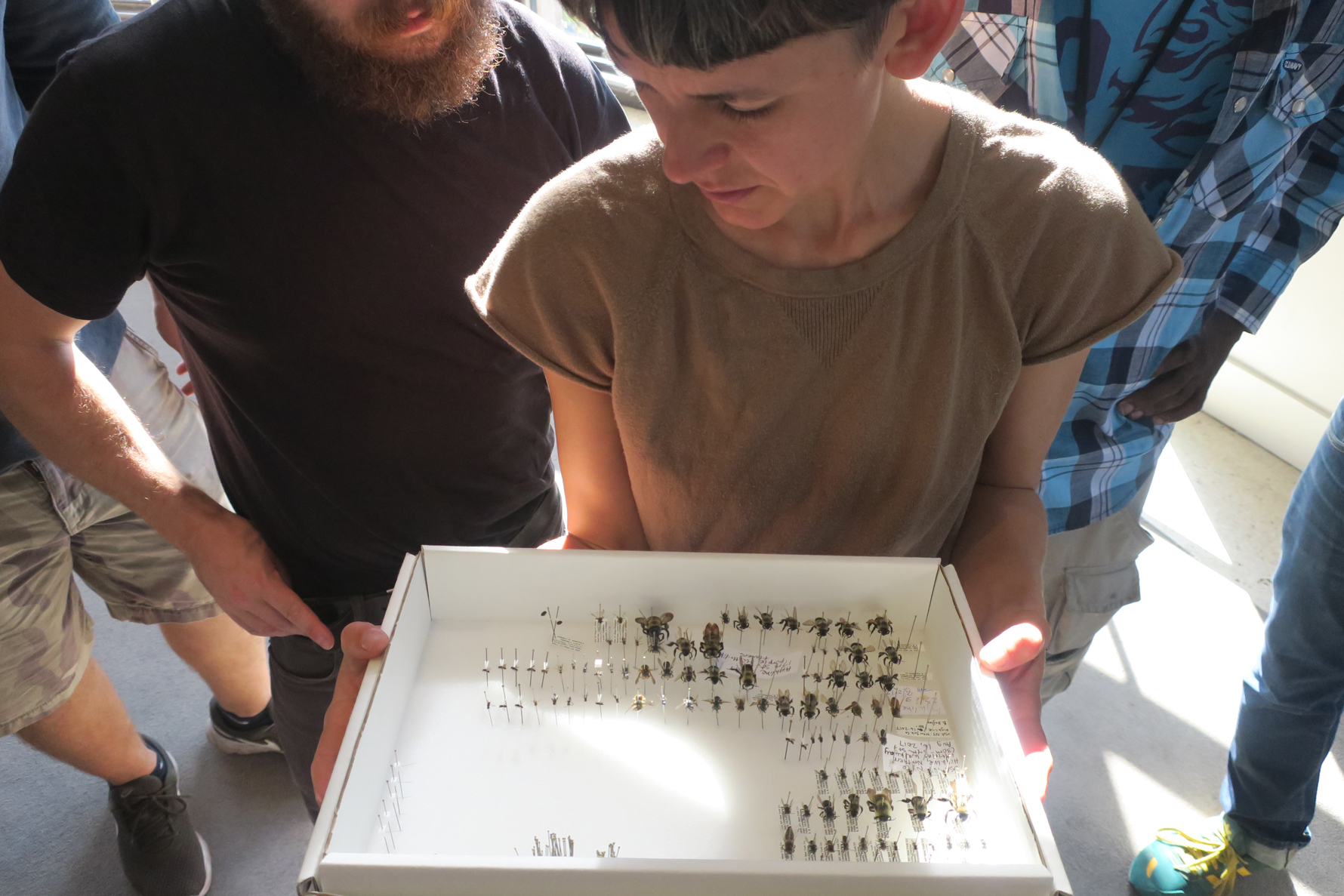 High Line gardener Erin Eck looks at pinned bees collected from the High Line during a visit at the American Museum of Natural History.Nicole De Feo

Currently, De Feo and Stubbs are working with the Horticulture team to develop alternate nesting sites that may be attractive to species like masked bees. These “bee hotels” are usually pieces of wood with various-sized holes drilled into one side to provide the kinds of cavities the bees typically seek. Protected from the rain with small roofs, these bee hotels are easy for anyone to deploy in their backyard or garden. Keep a lookout for some on the High Line flyover this fall.

The collaboration with AMNH confirmed what may have been only anecdotal previously—though narrow and winding, the High Line provides much needed resources for essential pollinators by having continuous blooms throughout the growing season. Studies show that even the smallest of urban gardens can have a positive impact on a variety of species. Often a single tree or pond is enough to support entire populations of insects within their confines. Combine these small oases with others nearby and a patchwork of habitats form that support flying (or hopping or walking) between. The linearity of the High Line naturally provides connections to other green spaces on the West Side of Manhattan, like the city’s largest green roof atop the Javits Center, in addition to pocket parks, rooftop gardens, and the adjacent ecosystem of the Hudson River. Alongside the 2017 survey, De Feo, Smith, and Kornbluth began conversations with the Javits Center and their green roof research team to compare findings and brainstorm ways to sort through the vast wild insect collection the Javits Center has been accumulating since 2014.

While it’s exciting to know that green roofs like the High Line and the Javits Center can support various species of wildlife, it’s also easy to turn your fire escape, backyard, or local community garden into a resource for native pollinators. Some tips include leaving areas of soil undisturbed, leaving behind bits of leaf litter and other plant material that can act as nesting sites, and choosing native plants that are natural pairs to the pollinators that support them. You can learn more about native plants from resources like the GreenBelt Native Plant Center based in New York City, which hosts an active seed library for NYC Parks, or the Lady Bird Johnson Wildflower Center, which helped to popularize the use of native plants in gardens. 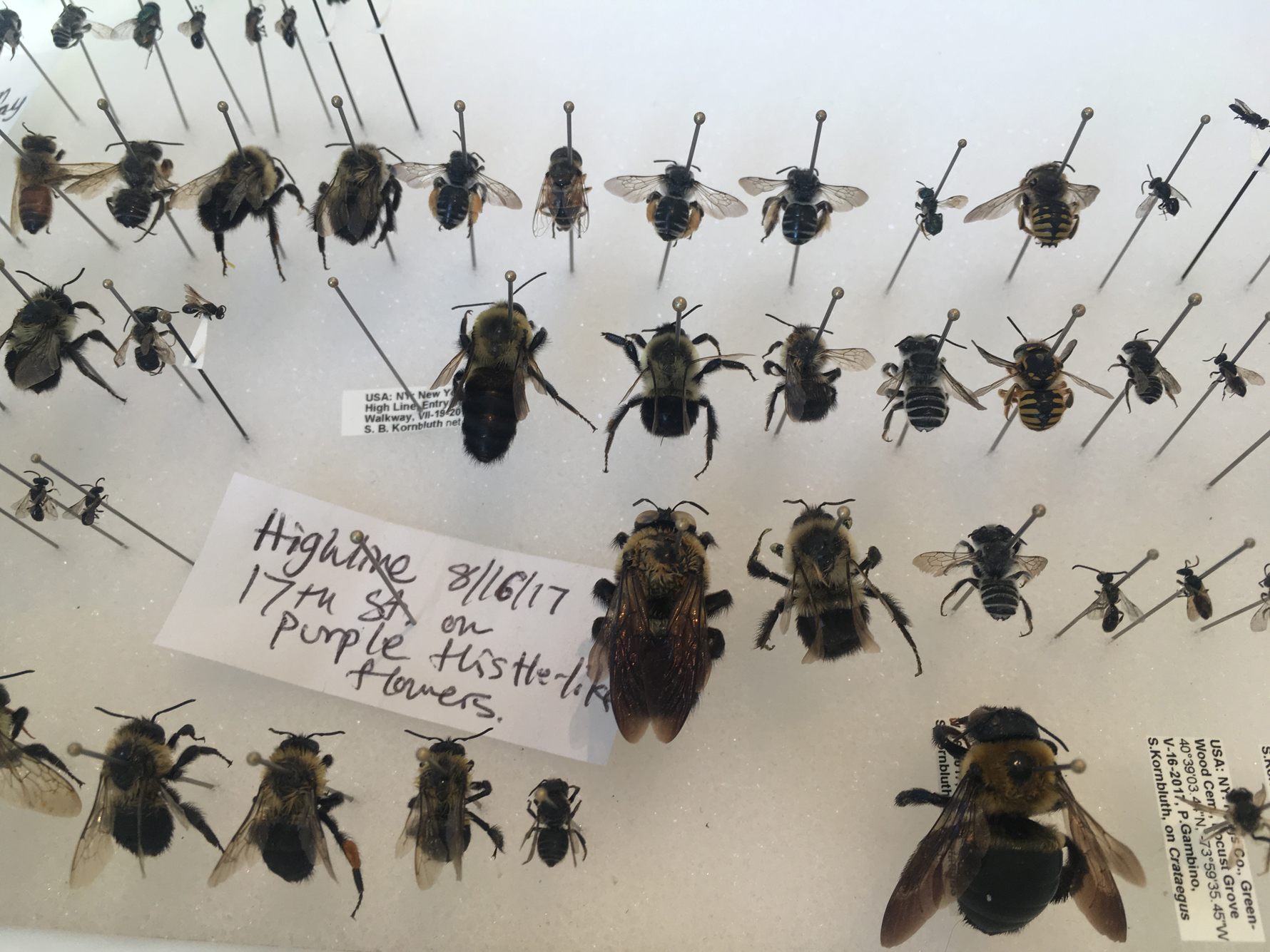 Bees collected from the High Line are identified and pinned, some of which will become part of the museum’s collection, with some heading back to the High Line.Nicole De Feo