A Thriver’s Guide to Stonewall 100

This conversation paid homage to the 50th anniversary of the Stonewall Riots, a series of uprisings that helped fuel the LGBTQ rights movement. It was an afternoon of interactive discussion with community members, artists, peers, and trained facilitators, with readings by the American Indian Community House, Jamilah Felix and Ngozi Alston from Black Youth Project 100, Sonia Guiñansaca, and Timothy DuWhite.

Below is a wrap-up by the event organizer and artist Theodore (ted) Kerr.

“Is Pride over yet? Am I the only one who feels targeted by this whole thing?” These were the opening questions poet and performer Timothy DuWhite posed to a crowd amid a setting sun, earlier this summer on the High Line’s 14th Street Passage for an evening of readings and a workshop entitled, How Many of Us Will Be Thriving for Stonewall 100?

The audience, a sweet and sweating array of queers, allies, and friends gathered around six tables. They responded with applause, smiles, and a few head nods reminiscent of an engaged choir member during a good sermon. 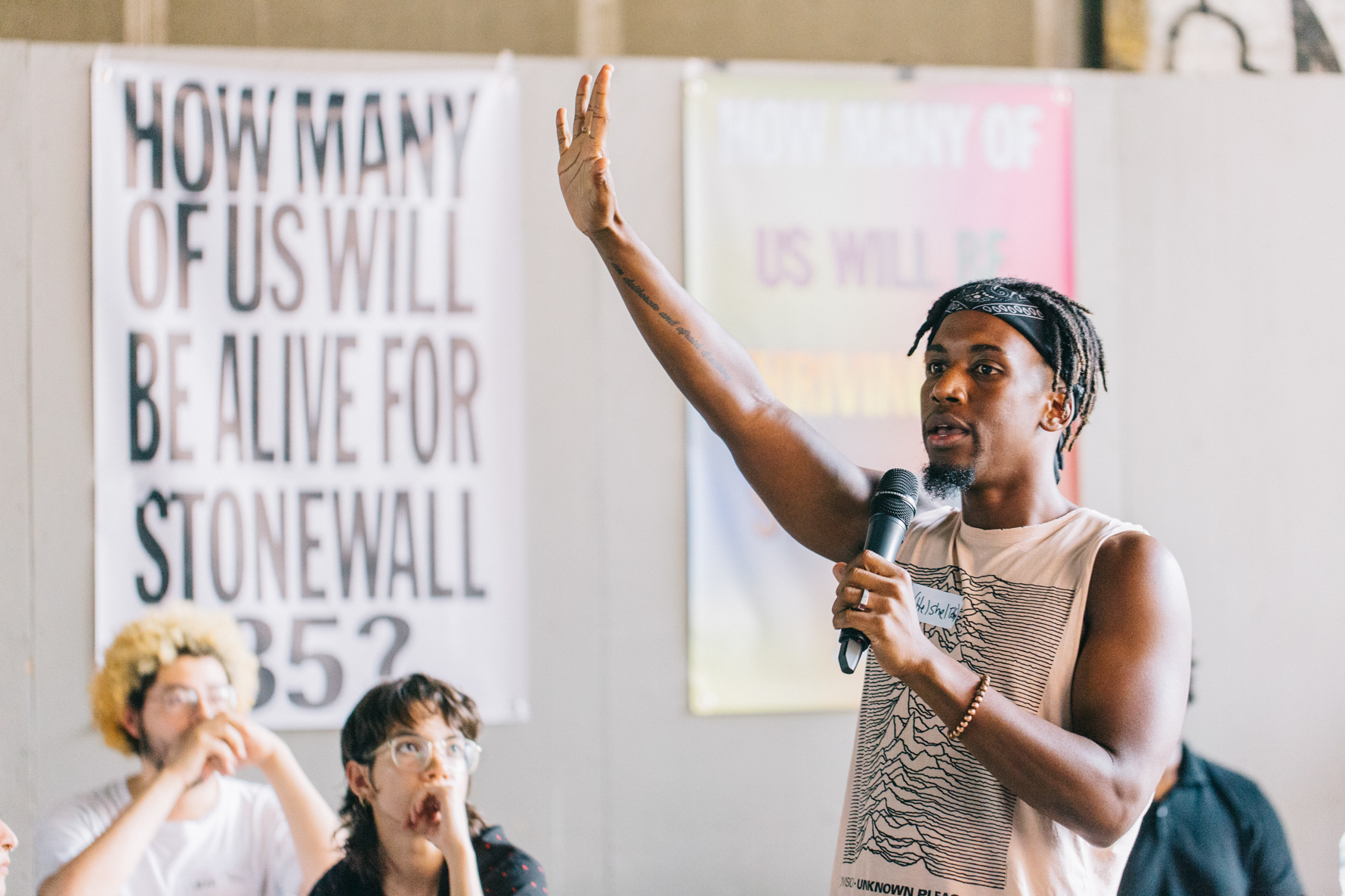 Timothy DuWhite at How Many of Us Will Be Thriving for Stonewall 100? in front of posters Stonewall related graphics designed by ACT UP, and Virgil Taylor for What Would an HIV Doula Do?Rowa Lee

It was late June and the lead up to Stonewall 50 had captured the city’s attention. It was an all-out marketing blitz honoring the fact that half a century earlier, a gaggle of unruly ladies, queens, queers, dykes, homos, and other others would not quiet down in the face of police intimidation. Bricks were thrown, arrests were made, and, as some like to say, the LGBT rights movement was born.

To mark Stonewall, it seemed like every bank, business and nonprofit with ad space or a storefront in Manhattan decided to dip themselves in rainbow. Similarly, online, one could not scroll too far without being reminded—IN HOT PINK FONT—that Stonewall was a riot.

For many queer people, such an onslaught of aggressively targeted content was both fascinating and upsetting. It’s not every day you see the media covering the life and times of freedom fighters like Marsha P. Johnson, Stormé DeLarverie, Sylvia Rivera, and Gilbert Baker. At the same time, as DuWhite was getting at, the attention was unnerving, like the sound of only one shoe dropping, or a whiff of sh*t just as someone turns on a fan.

How Many of Us Will Be Thriving for Stonewall 100? was organized with such feelings in mind, with an awareness that Pride can be a heady time, regardless of the Stonewall  50 spectacle. The explosion of programming, attention, and opportunities for connection can be exhilarating, and the same time alienating, disappointing, and overwhelming. To help even out the experience, the High Line and the AIDS culture collective, What Would an HIV Doula Do? (WWHIVDD) created a program that took advantage of the opportunity to see Stonewall in a historic context, while also grounding it in the present and the future.

The title of the program was inspired by the 1994 pride parade hand out created by ACT UP that read: How Many of Us Will Be Alive for Stonewall 35? It was the legendary AIDS activists’ intervention into Stonewall 25 to ensure that the epidemic was not glossed over amid the progress narrative celebrations. On the other side of the handout was the text: AIDS: WHERE IS YOUR RAGE? ACT UP! That year HIV was the leading cause of death for North Americans ages 25 to 44. The medical breakthrough of life-prolonging medication was still at least two years away.

Twenty-five years later, the crisis is not over. The release of medication in 1996 helped ensure that HIV could go from “a death sentence” to a “manageable chronic illness” [in developed/affluent nations/populations; in 2018, ~770 000 people died from AIDS-related illnesses.] But medication only works if someone has access to care such as stable housing, food to help absorb medication, and freedom from criminalization and detention. In the last year at least two people with HIV died while in ICE custody.

To help connect the experiences of HIV across time, WWHIVDD reworked the question as both a response to ACT UP, and a prompt for a community check in. “Surviving” was changed to “Thriving,” to make room for progress, (with an awareness that there is no thriving without surviving), and the signpost was moved from 10 years (Stonewall 25 to 35) to 50 (Stonewall 50 to Stonewall 100), in an attempt at optimism. 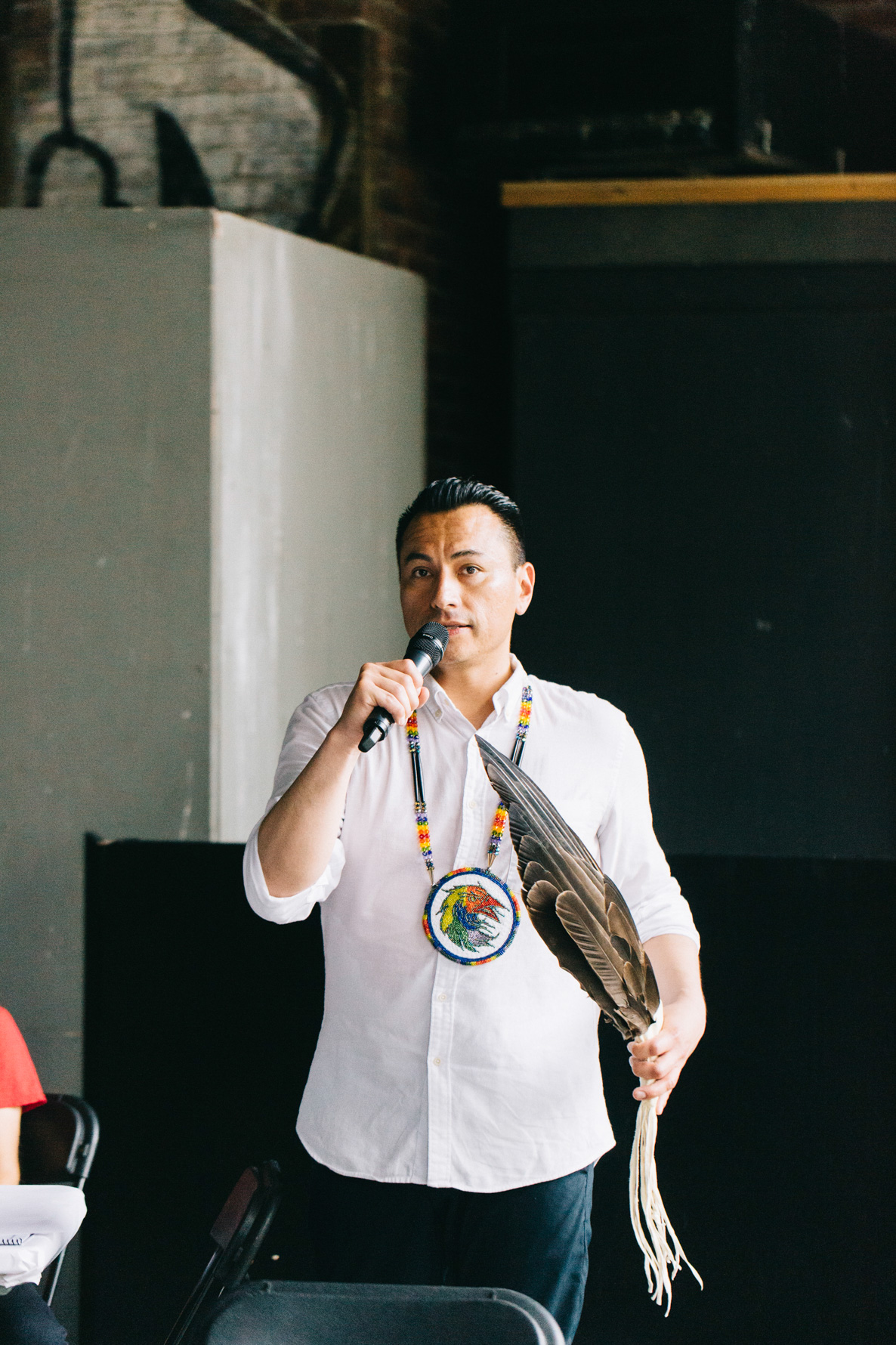 Sheldon Raymore, providing a land acknowledgement. Raymore is a member of the Cheyenne River Sioux Tribe and lives in New York City. Since 2014 his mission has been to increase HIV/AIDS awareness, sexual health education, and accessibility to PrEP services for the Two Spirit community and beyond.Rowa Lee

Raymore began with a land acknowledgment, reminding us that we were on Lenape Land. This was echoed back later in the event when people spoke about how no one can be illegal on stolen lands. 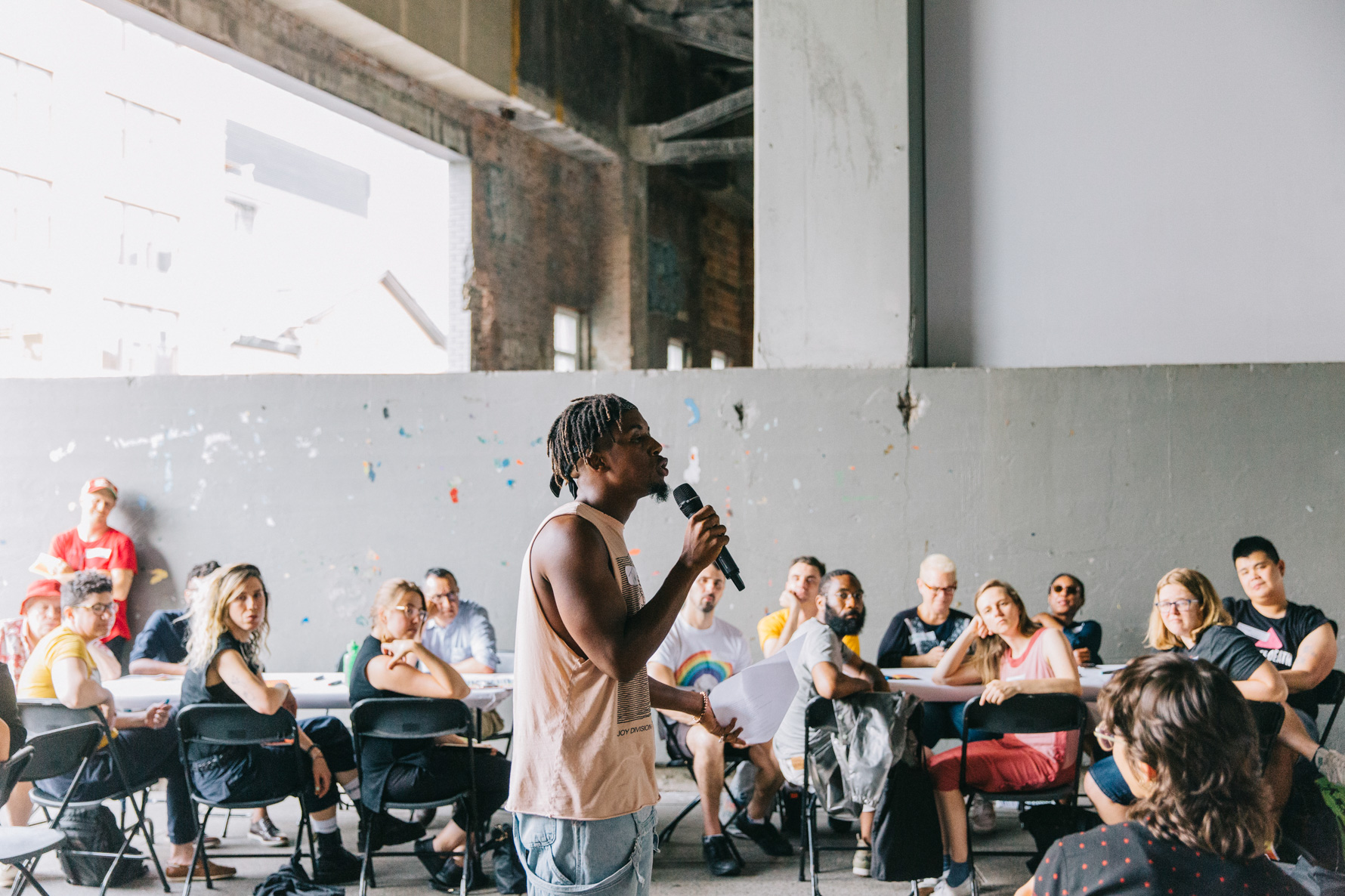 Timothy DuWhite was next. After warming up the crowd with his prescient questions, he shared his piece, Joy Revisited, and a yet titled work-in-progress that evoked family, trauma, and time. 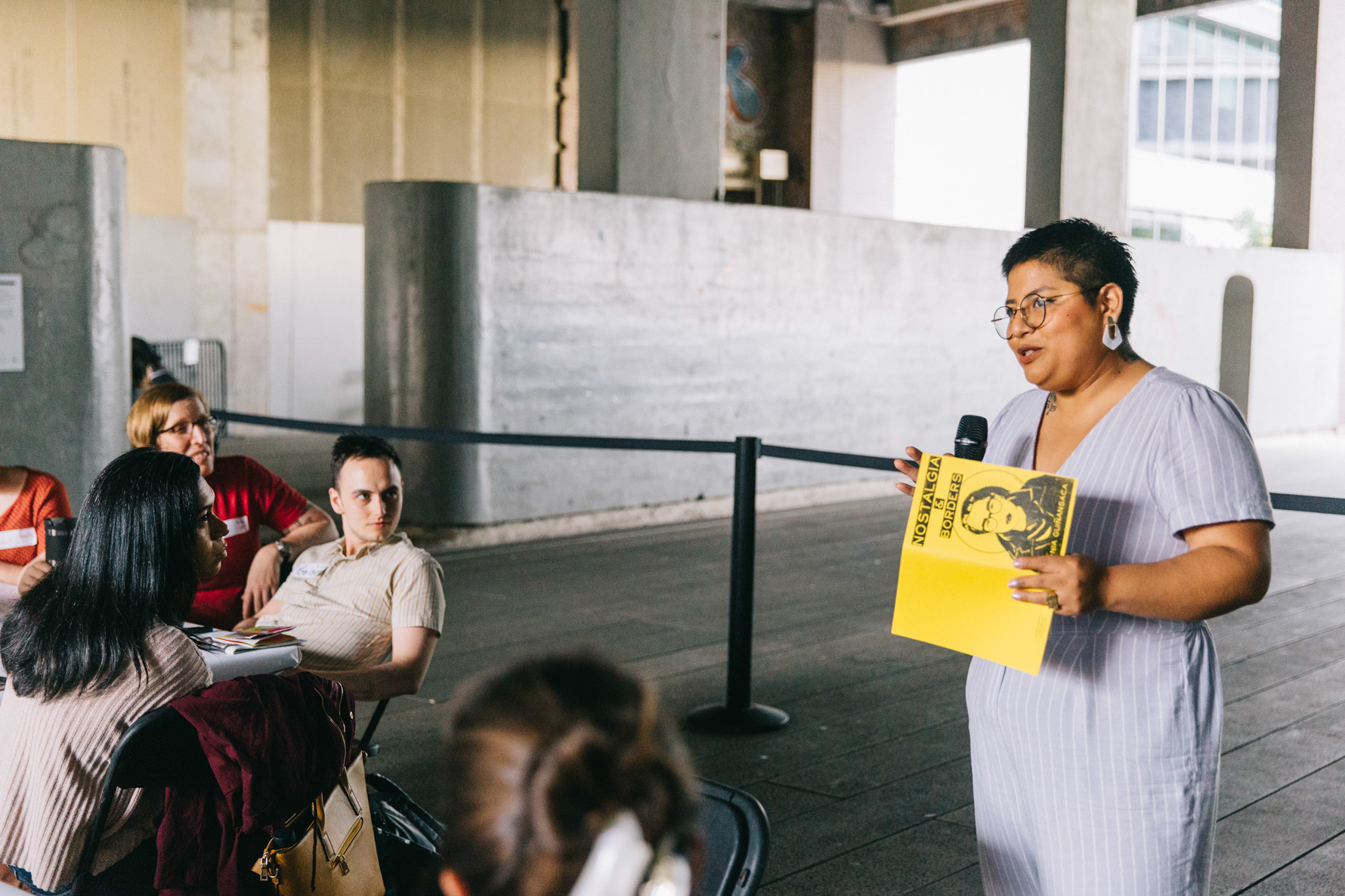 Sonia Guiñansaca is a queer migrant poet, multi-disciplinary and multi-dimensional artist and cultural organizer (strategist) and social justice activist from Harlem by way of Ecuador.Rowa Lee

Sonia Guiñansaca also evoked family, matriarchs, and women who inspire through their persistence. While she read, one of the How Many of Us Will Be Thriving posters fell, a sign it seemed to many of Guiñansaca’s power. 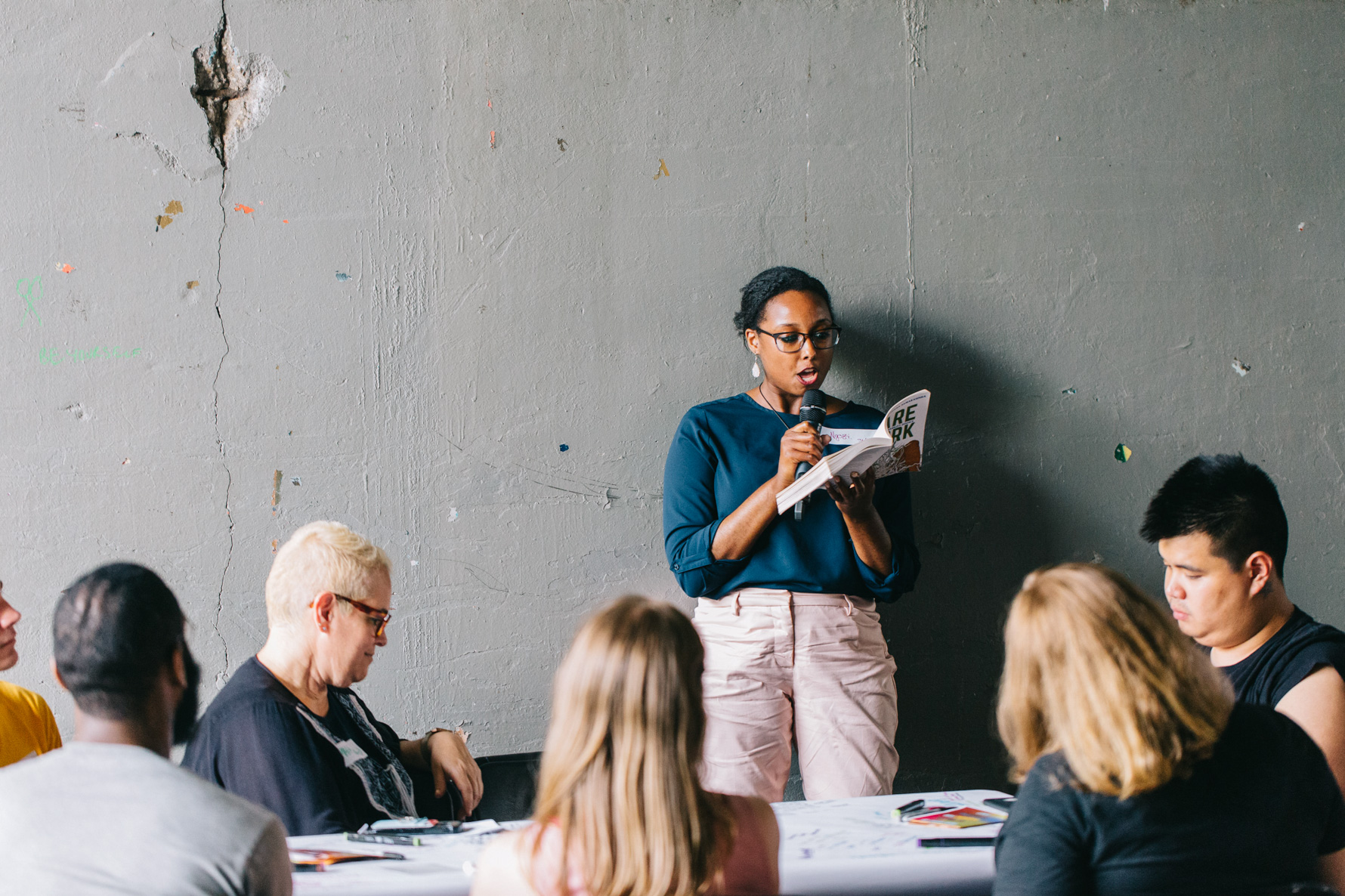 Ngozi Alston is organizing chair at BYP100’s New York chapter, and is also involved in No New Jails NYC. She works to center disability justice practices through a Black queer feminist lens.Rowa Lee

Ngozi Alston shared passages from Care Work: Dreaming Disability Justice, by Leah Lakshmi Piepzna-Samarasinha. In the section she read, we gathered as listeners, and were invited to remember the power that comes when we consider the best lives for all of us, excluding no one. 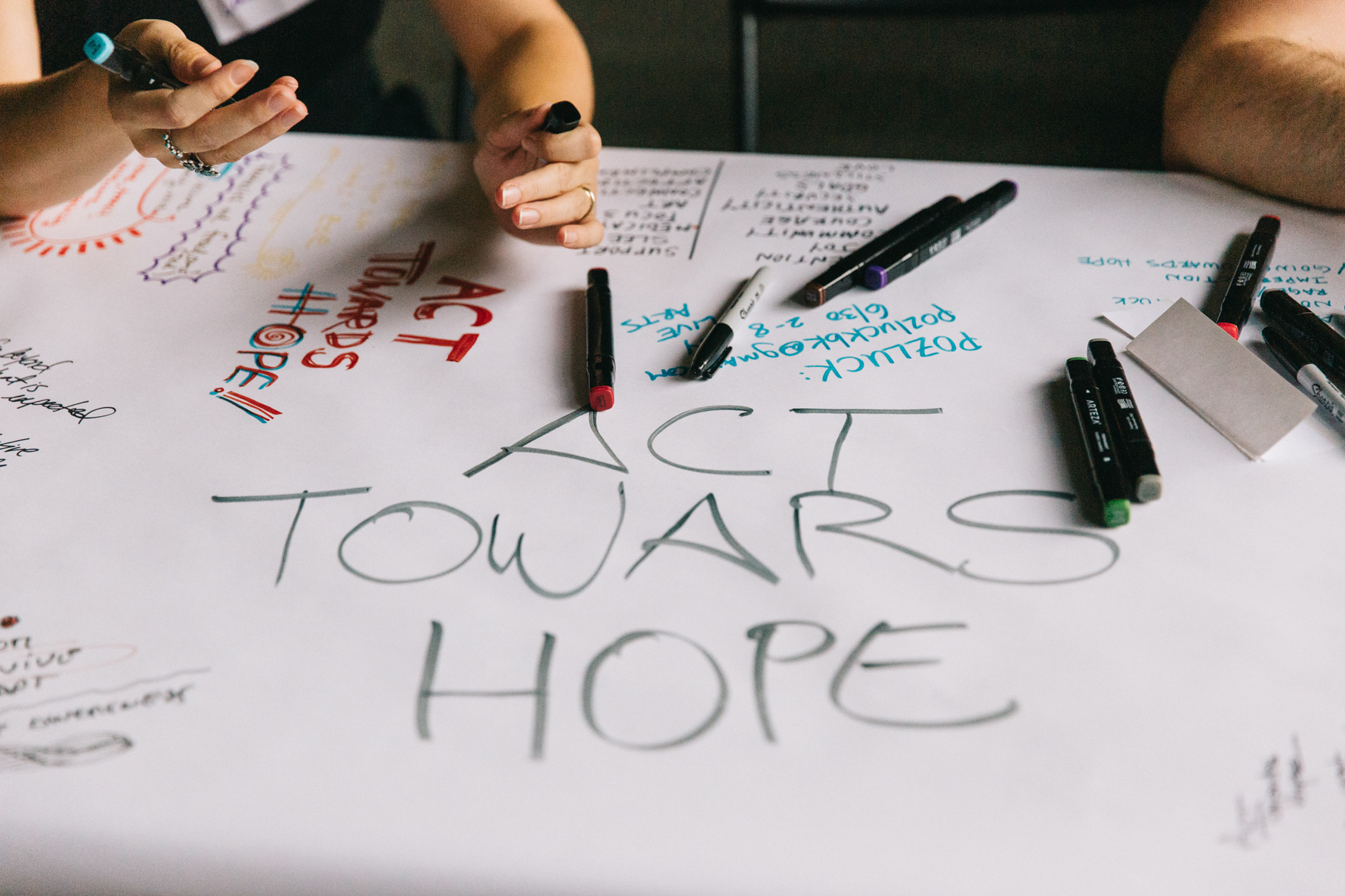 The event took place around six tables, each covered in white paper, with markers and facilitators for enriching and intimate group discussions.Rowa Lee

The first discussion centered on the questions, “What do we mean by thriving? What do we need to thrive?” The second focused on imagining the best case scenario for the world in 2069, and then naming what would be needed to get there. Below are images from people’s responses. Some takeaways:

In thinking about the conversations, what becomes clear is that in between now and Stonewall 100 is what we have done, and what we will do. Uniting these two things is us: our choices and questions;  the systems we live under; and how we gather in community, share what we have learned, and decide what we can do together . 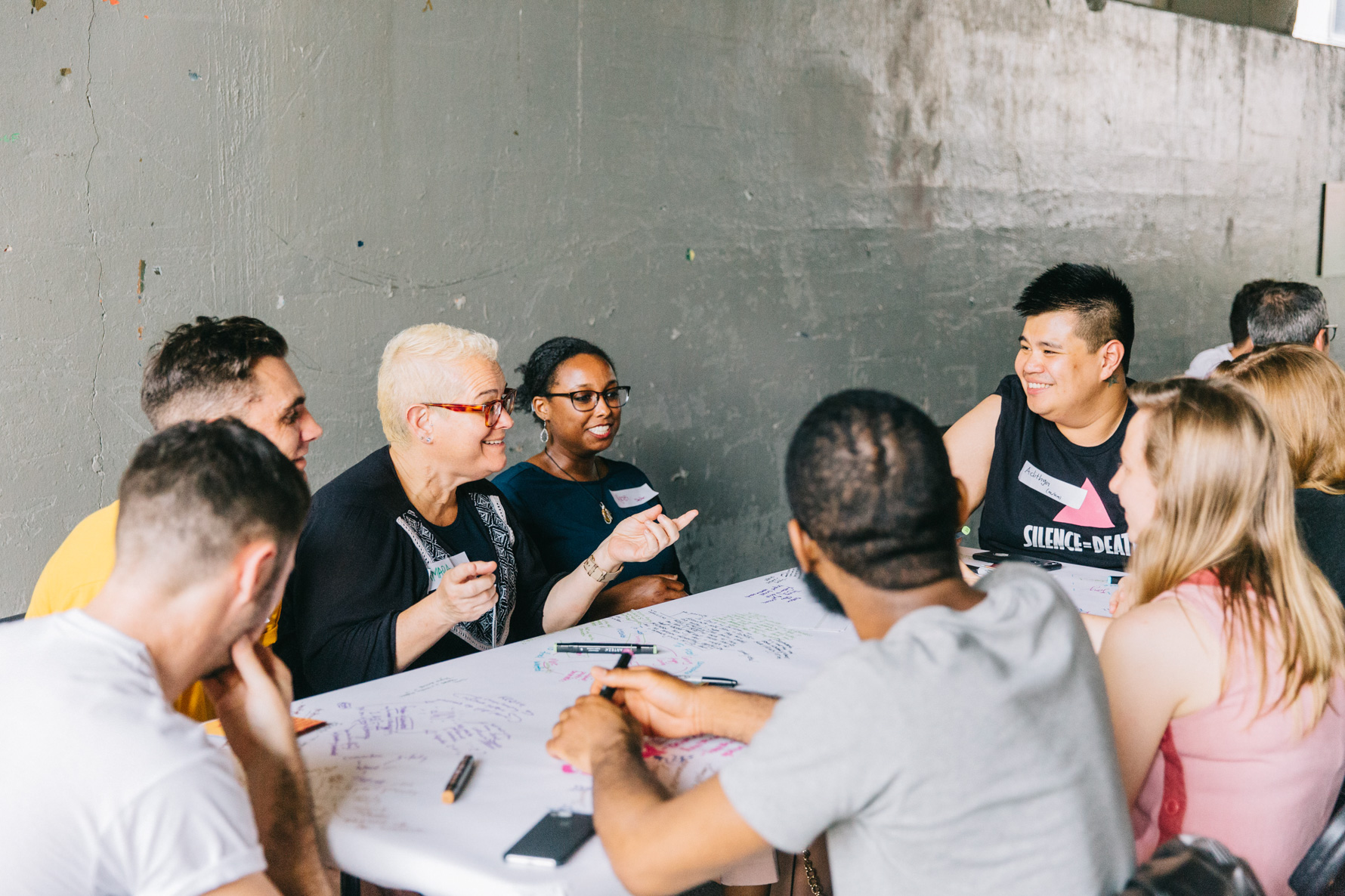 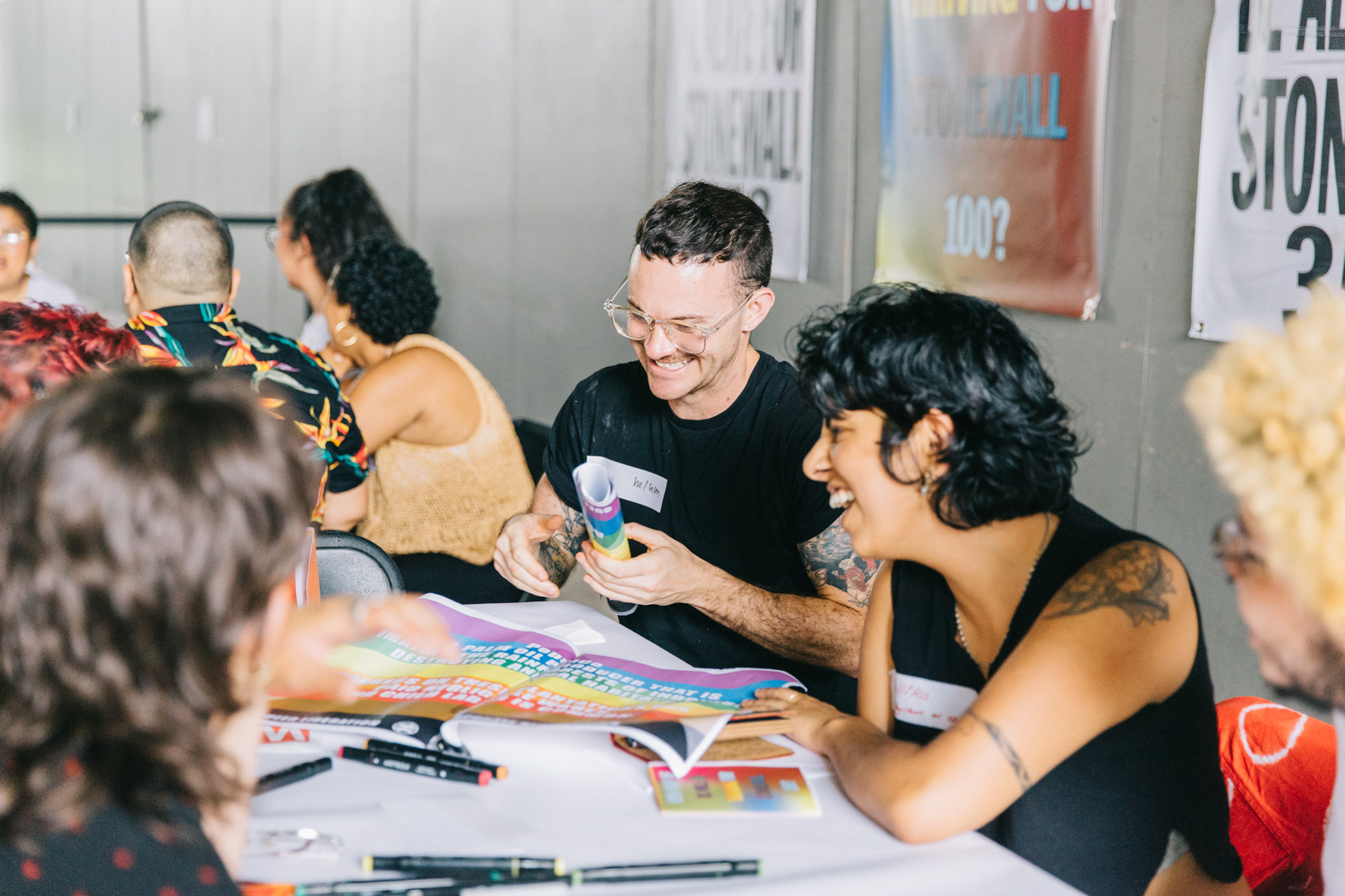 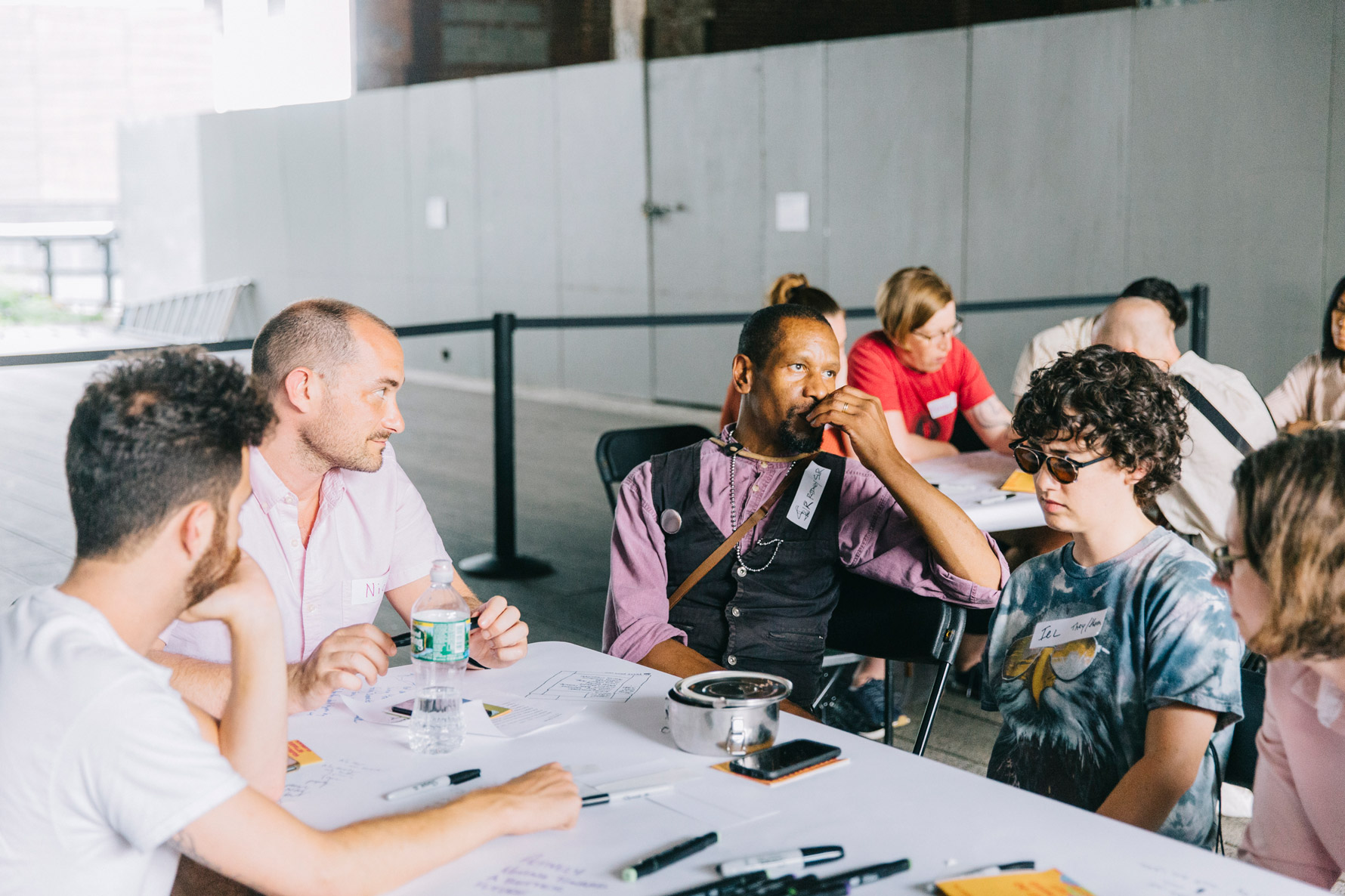 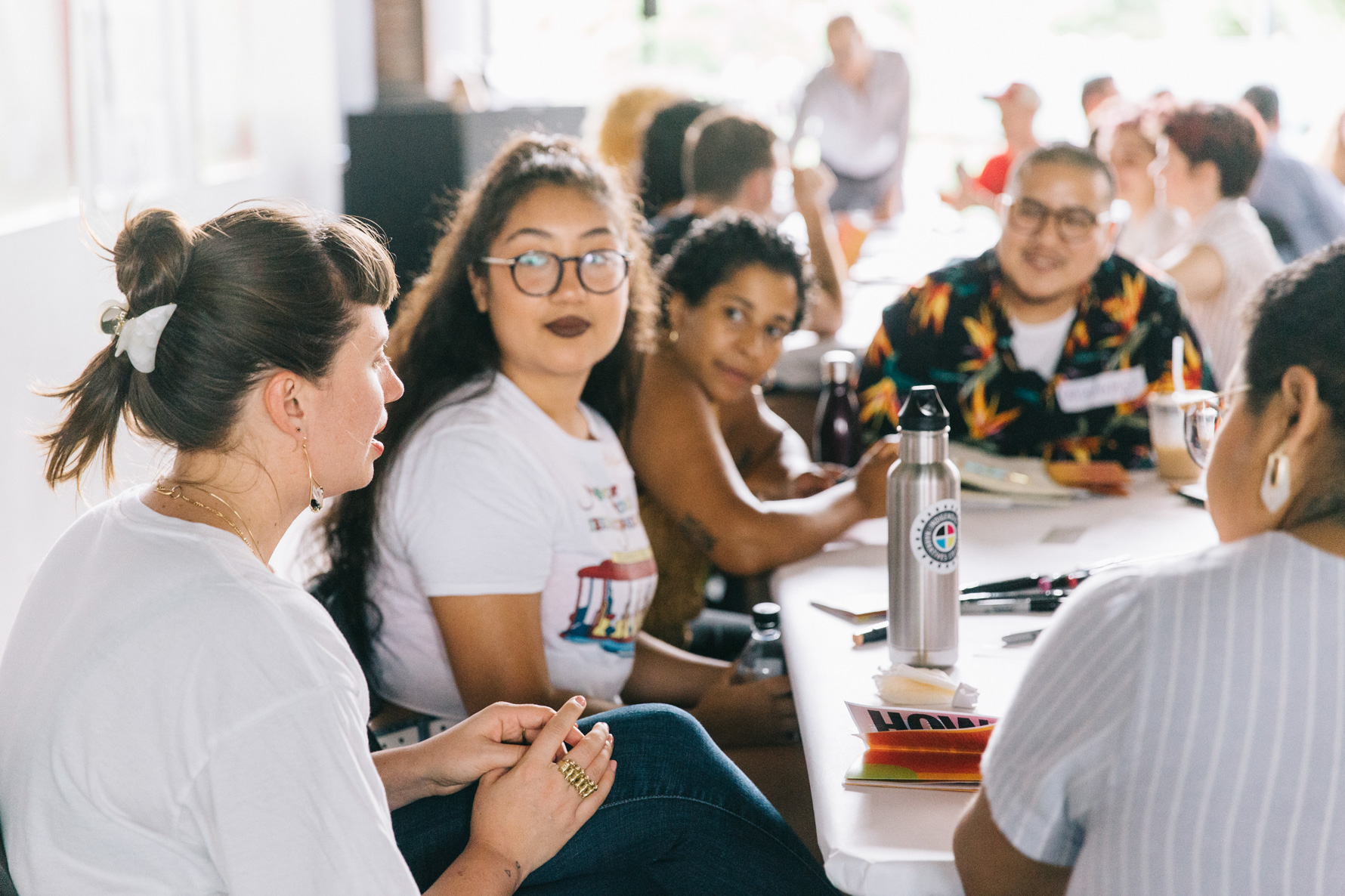 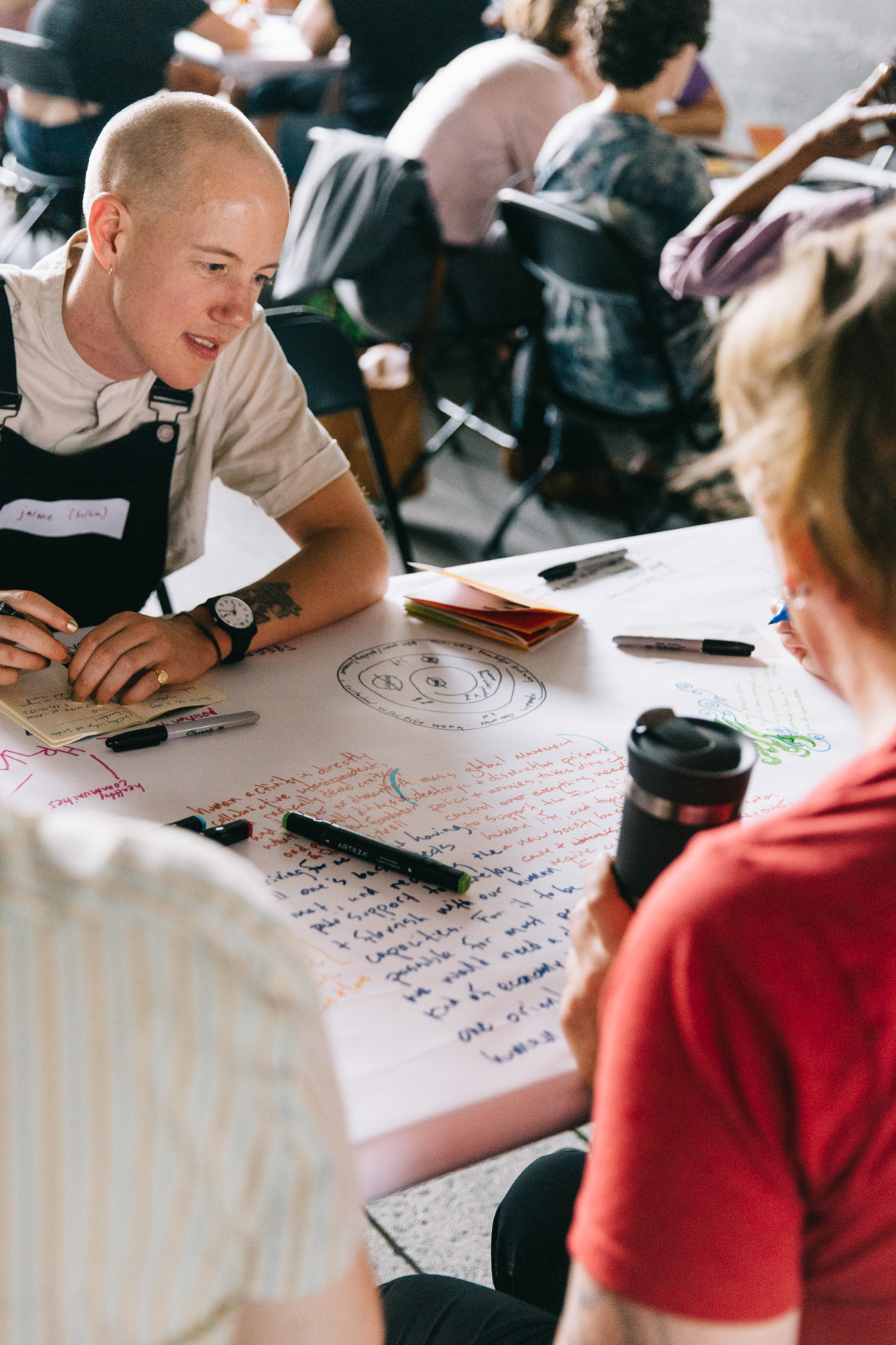 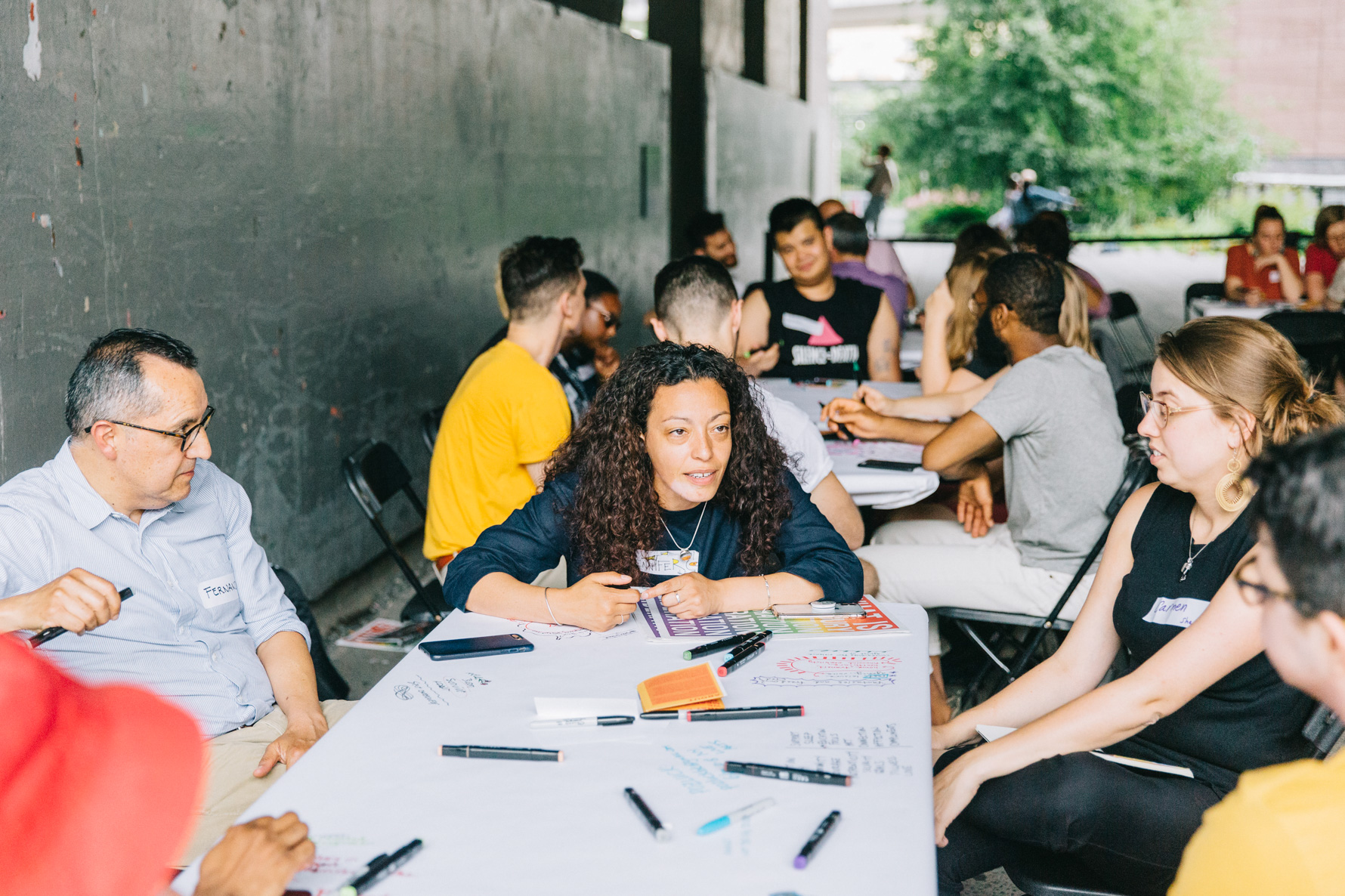 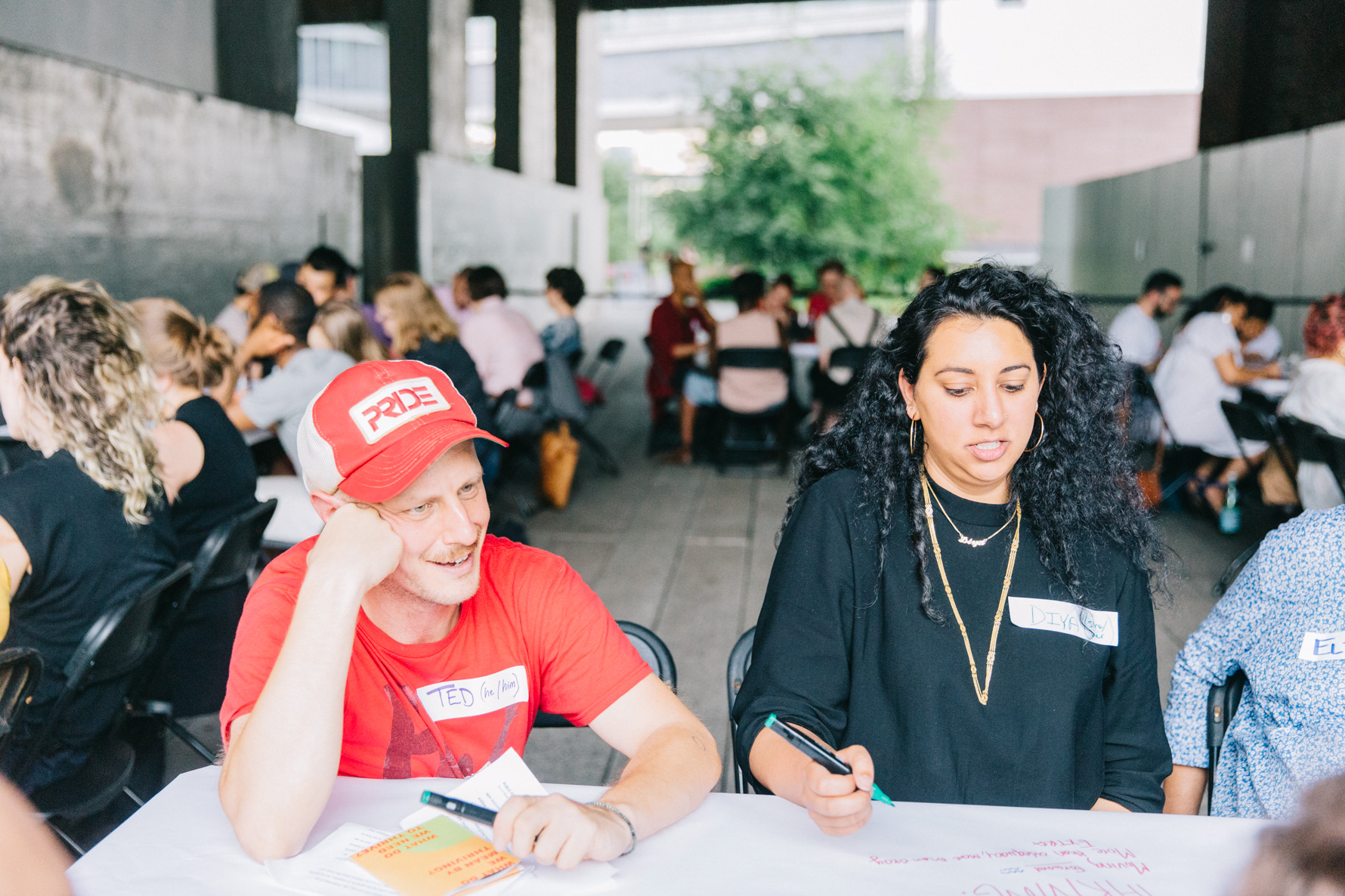