A Brief History of Chelsea with a Long-Time Resident

Imagine hearing the rumble of freight trains along 10th Avenue just steps from your front door. Or yelling to your neighbors to shut off their lights for fear of submarines in the Hudson River during WW2. Rosanna Cox Zuckerman, at 96 years old this month, has lived in the same house near 22nd Street and 10th Avenue and has witnessed firsthand the many incarnations of her neighborhood and the High Line.

Chelsea has seen many lives: as the site of a Native American trading post, an industrial hub, center for punk art and music, gallery row, LGBTQ club-life hub, and as a destination for big name architectural development. Read about the history of Chelsea from pre-construction to present day, with insights from a life-long resident.

The city’s original inhabitants, the Lenape, established a village named Sapokanikan, or “Land Where the Tobacco Grows.” This village comprised much of current day Greenwich Village and Chelsea.

When the Dutch made contact in Mannahatta (the Lenape word for their homeland, meaning “island of many hills”) in the 1620s, their death rate skyrocketed from epidemics of infectious diseases carried by Europeans, such as measles and smallpox.

After the signing of the Treaty of Easton in 1758, an agreement between British colonists and 13 Native American Nations, the Lenape are mandated to move off their lands into what today is known as Ohio.

On August 16, 1750, Major Thomas Clarke bought Jacob Somerindyck’s farm, which encompassed land from 21st Street to 24th Street, and from the Hudson River to 8th Avenue. He named the estate after a Chelsea retirement community in London.

Clarke later passed his estate onto his daughter Charity and her husband, Benjamin Moore—the second Episcopalian bishop in New York (and now famous for giving the Holy Communion to a dying Alexander Hamilton). They gave birth to a son in their home on July 15, 1779—Clement Clarke Moore, who would go on to pen “The Night Before Christmas,” as well as the first lexicons of Greek and Hebrew in the United States.

In 1827, the Clarkes sold and developed their land into housing. Twenty years later and the neighborhood experienced a boon in industry. Manhattan Gas Company, and distilleries for turpentine and camphene brought in a wave of immigrant workers, namely Irish fleeing the Great Irish Famine.

In the mid-19th century, construction began on residences in the present-day Meatpacking District, then an extension of the popular vacation spot of Greenwich Village, and the post-War of 1812 military site Fort Gansevoort was replaced by the brand new freight yards of the Hudson River Railroad. 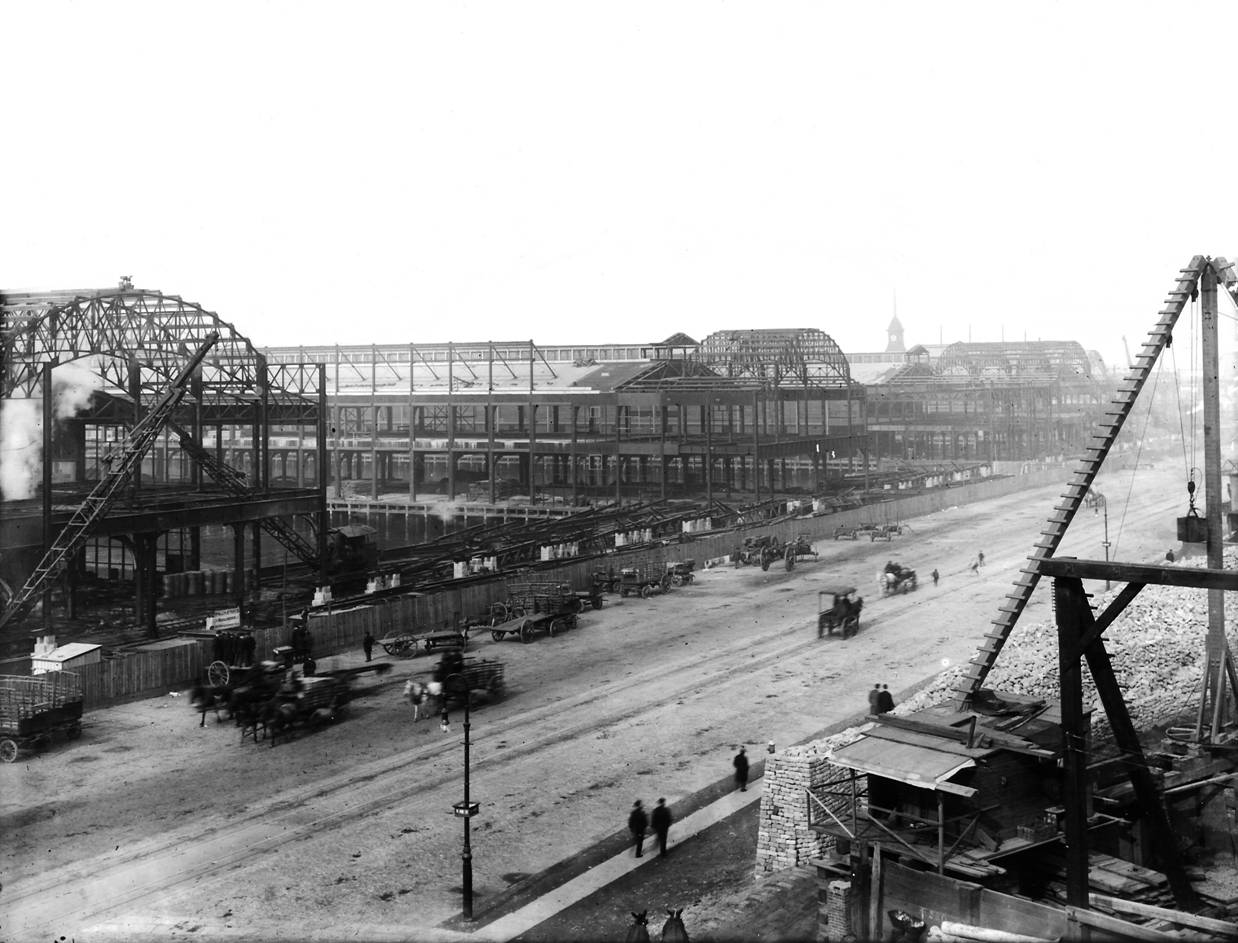 Construction on the Chelesa PiersUnknown

As a result, Chelsea bustled as a hub for the transportation of goods in and out of the city. Traffic collisions along the Hudson from 22nd to 11th streets caused so many casualties that the route became known as “Death Avenue.” Five hundred people protested against these dangerous conditions. [Read more about Death Avenue and the West Side Cowboys]

Of the early 1900s, life-long Chelsea resident, Rosanna Cox Zuckerman says, “You were in danger of your life when you went to the river because there were horses pulling things and people were literally having to sort of dodge their way through. Little girls never went down there. No one did.” 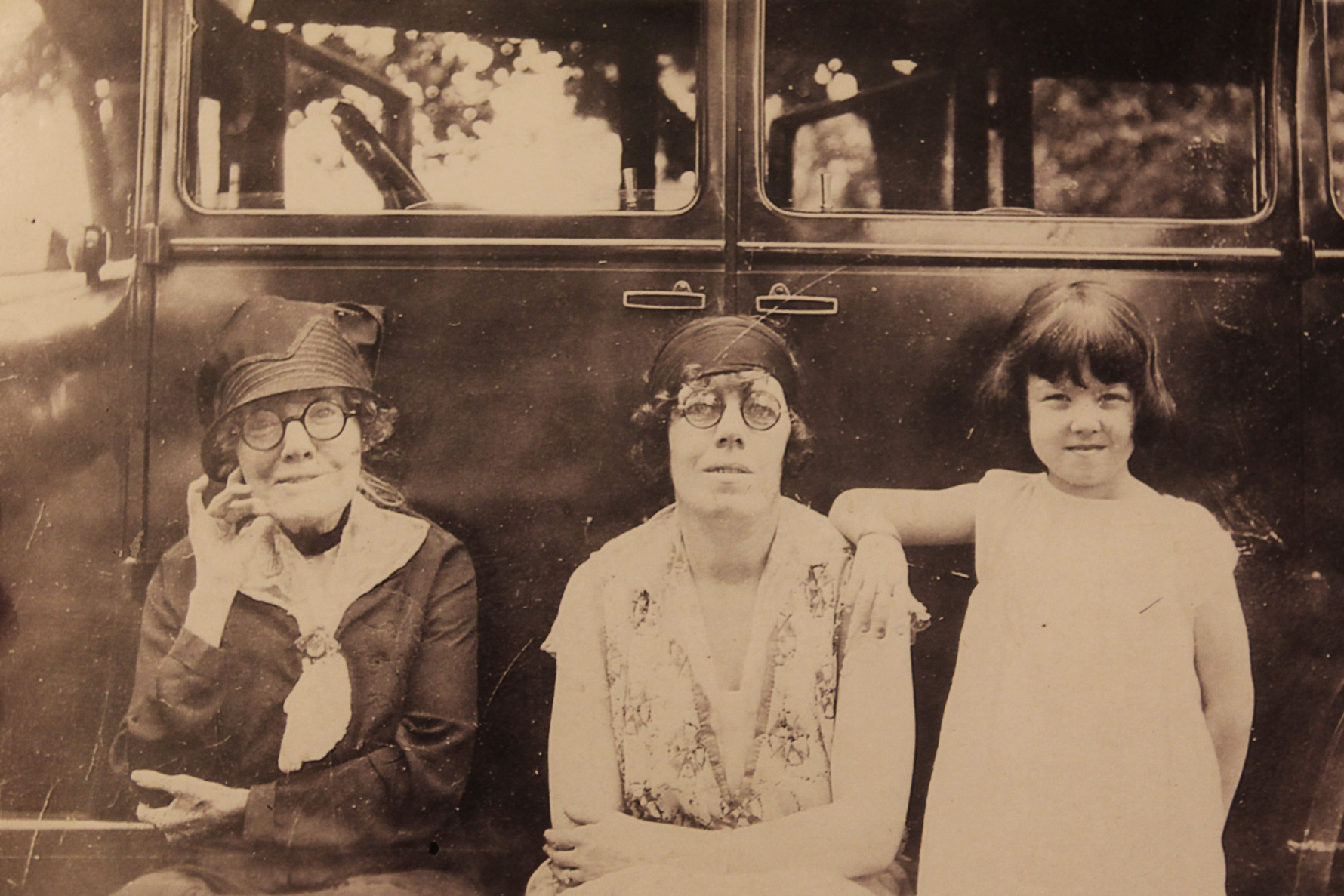 Rosanna was born in a brownstone off 10th Avenue going back six generations to former Irish potato farmers. She, her mom, her grandmother, and great grandmother who came when young all grew up the same house, a building that dates to 1854 (perhaps part of the Clarke’s development). A family legend states that “Teddy Roosevelt bounded up the stairs in this house several times because my great or great-great grandmother rented our top floor to Roosevelt’s head shot photographer when he was commissioner of police in New York.”

The Coxes were one of the millions of Irish families who came over to the United States to escape the potato famine. Their family took a detour to the Gold Rush and was lucky to enough to return “with a little bag of gold that bought the house just after the Civil War.” And it’s been in the family ever since.

Purchased for an unknown amount, “probably a couple of thousand,” they were offered barely much more for their home in the 1950s. To this meager offer, Rosanna says “I said ‘I’d rather have it torn down’, and that was the end of that.”

She remembers this era of Chelsea well—when men carted vegetables and sold tomatoes on the street, and carried ice on their backs to cut blocks that would perfectly fit customers’ iceboxes—“they had to cut it so the proportion of the ice fits and if you had a small box gotta cut a little more.”  Rosanna went to school at the Church of the Guardian Angel (then called the Longshoreman’s Church in those days because of the proximity to the docks), which still stands just off the High Line on 10th Avenue and 21st Street. 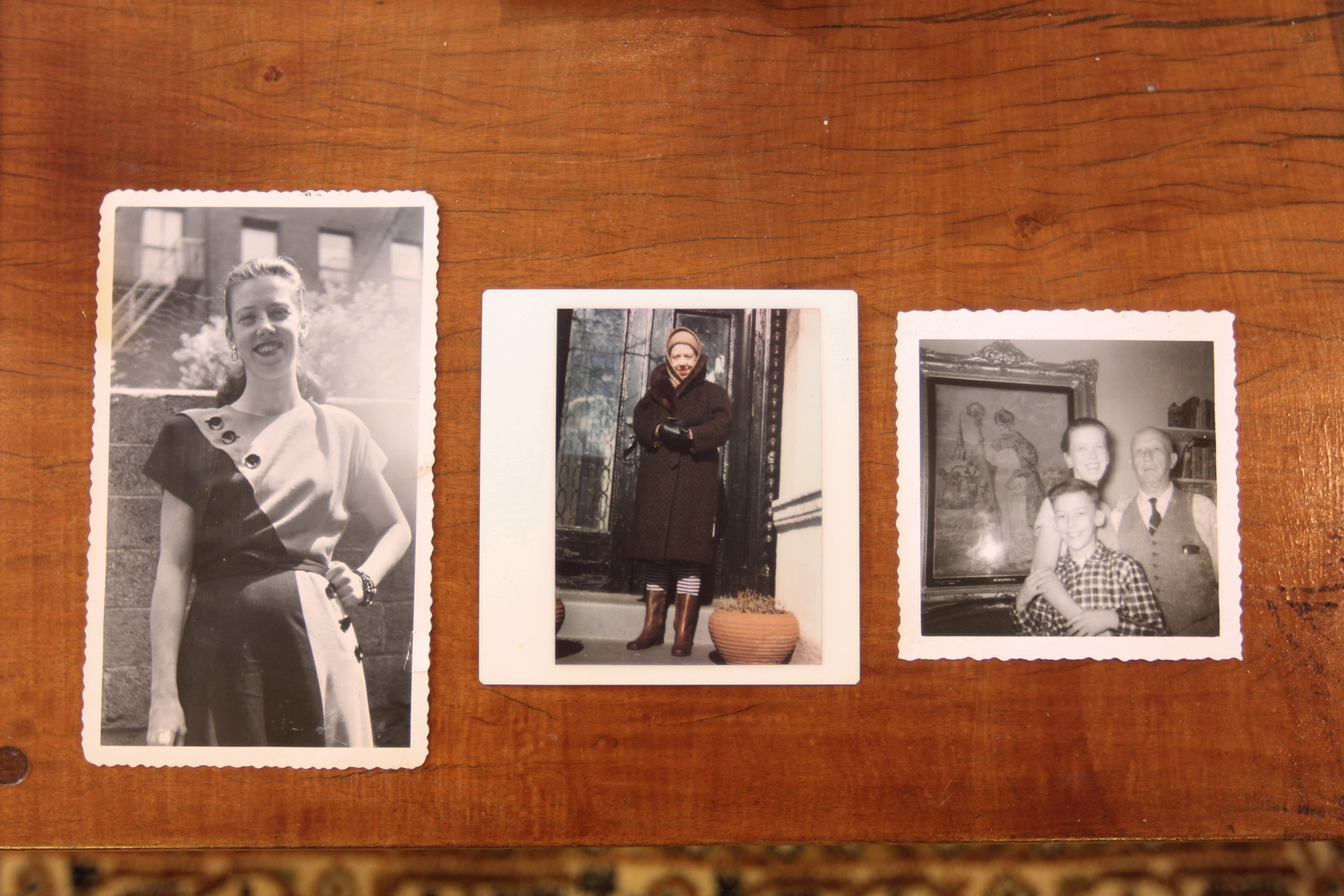 Says her son Richard Cox, “One of the big things that would surprise people is that Chelsea was 98% rooming houses, like seven in a room, one bathroom in the hallway, one gas range for the entire floor to cook. We were one of maybe half a dozen private houses left on the block.” In fact, the Chelsea-Elliot public housing, with four eleven and twelve story buildings, originated in 1897 and remains essential to the fabric of this neighborhood today. Furthermore, in 1929 Alexander Jackson Davis had completed construction of London Terrace, his design for the then-largest building in the world—an apartment complex for “white collar workers” that took up an entire city block in the heart of Chelsea. 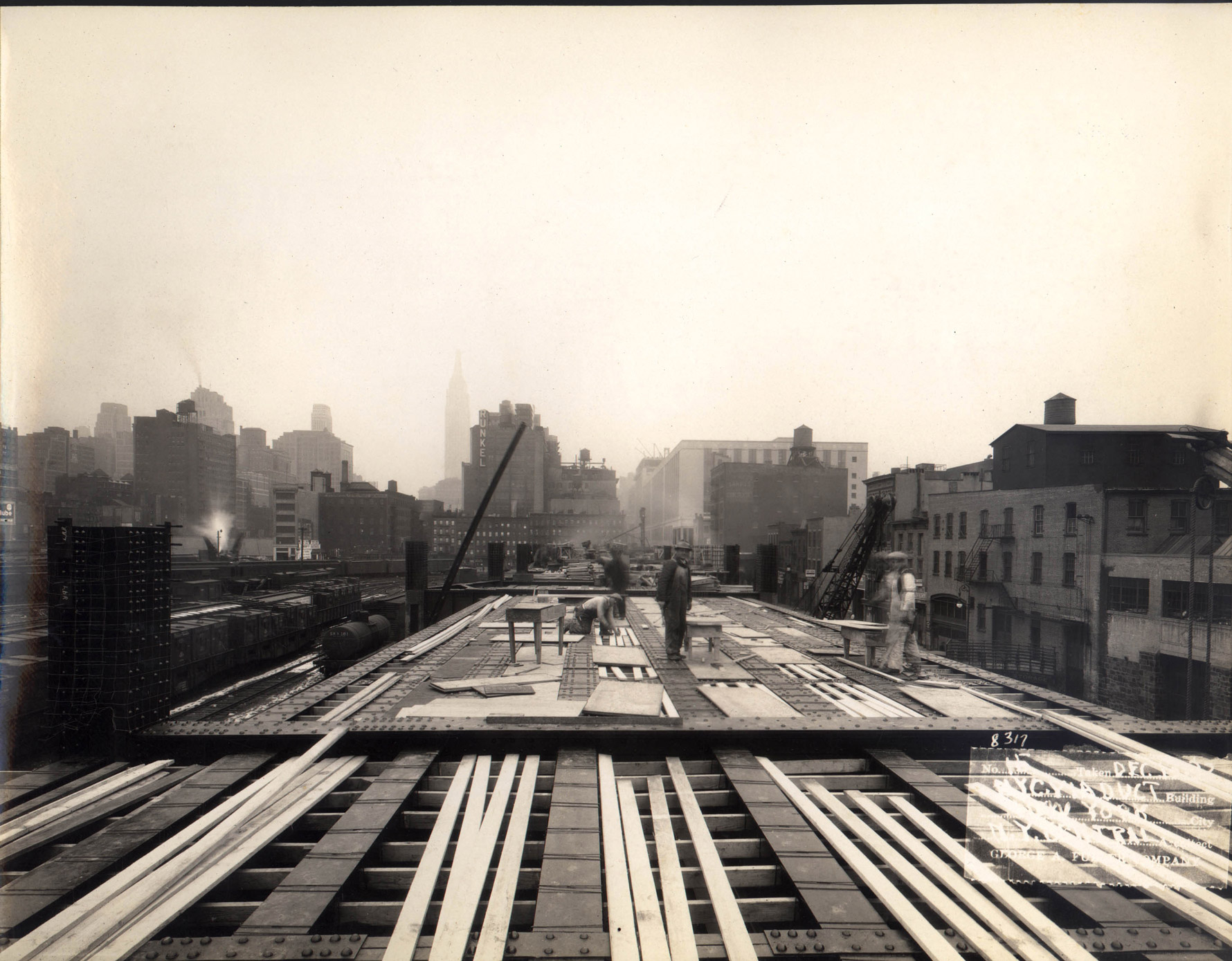 The High Line under constructionunknown

Meanwhile, in 1934 the High Line (a nickname that would not become its moniker until the 80s) opened. At an estimated cost of $85 million, the rail was heralded as one of the greatest public improvements in the history of New York. Dubbed “the lifeline of New York,” the line transported meat and dairy from the Hudson Valley into the city, ending at the 4.2 acre-large St. Johns Terminal. 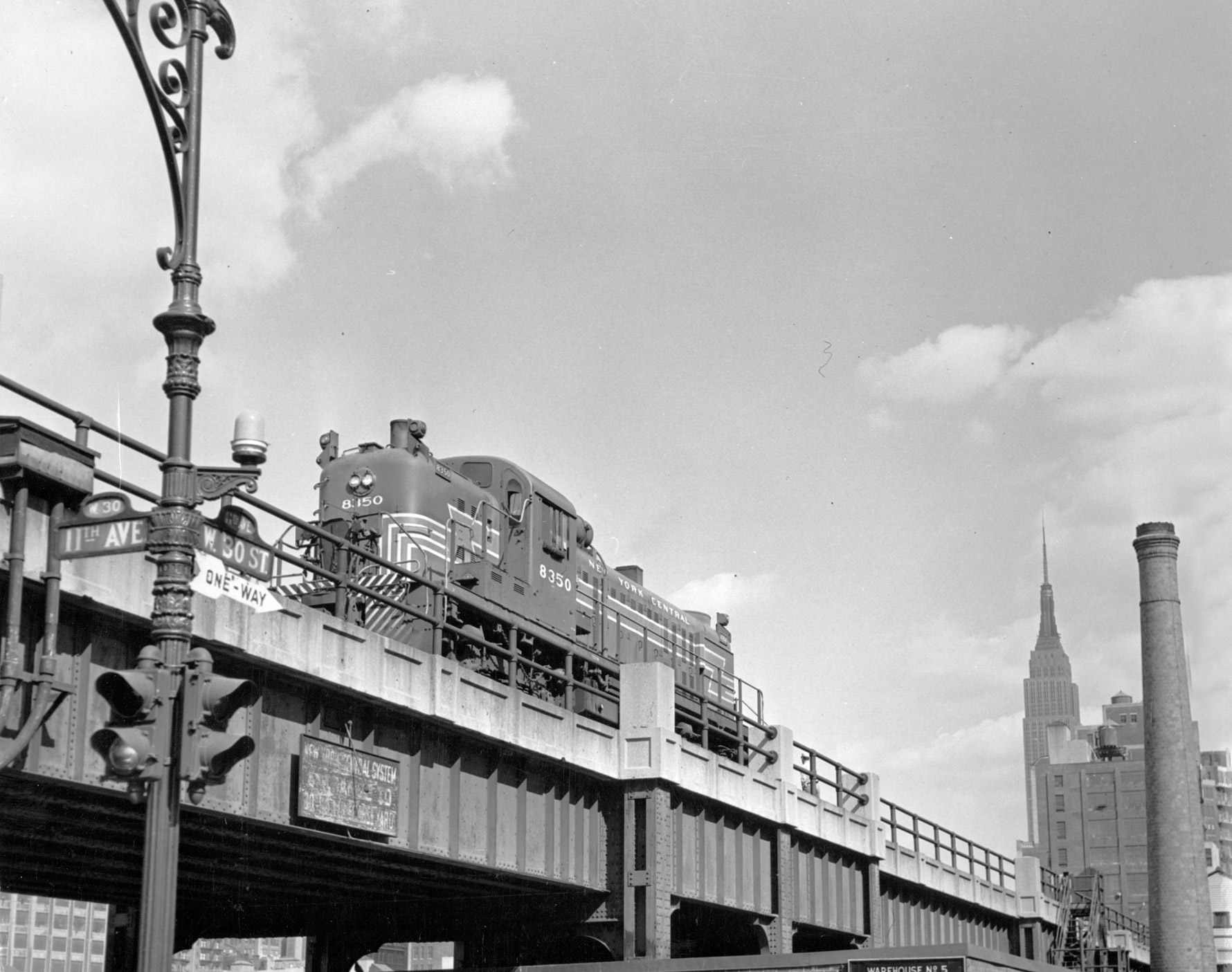 A year later, the last addition to the Manhattan Refrigerating Company was completed. The new space, which included a section for the elevated railway with three tracks running beside Washington Street, would come to play an important role in the Meatpacking District by bringing cool air and brined water to the neighborhood.

The 1930s through the 40s, saw all of New York enter into wartime, with citizens rallying behind the cause. Rosanna was a warden in Chelsea during World War II. “All the lights had to be out. They felt that the river attracted submarines to take a good look at what was going on here. So I was out there, telling them to put the lights out. Screaming, ‘lights out, lights out’! And, the lights went out. But there was one guy who wouldn’t turn his light out. He would shine his light out of the street. And finally someone threw a brick right to the window.” And the Bell Laboratories Westbeth Building in nearby West Village became famous as a home for part of the Manhattan Project during the war.

After the war ended, by the 1950s, the Cox Zuckerman family say life in Chelsea was “lived on the streets; it was very lively.”

A Cox family friend says 10th Avenue “used to remind me of kind of a Hopper painting and had that lonely feeling with low buildings and brown stones. It’s interesting to me how even though many things have changed in the village, it’s still sort of feels the same, whereas now Chelsea has completely changed; anybody who came the first time to see it now, would not be able to really imagine. The changes came and everybody just kind of adapted to it. I’d say one of the big changes when was when they got rid of rooming houses. And then of course, this whole side of the street was empty for many, many years.” 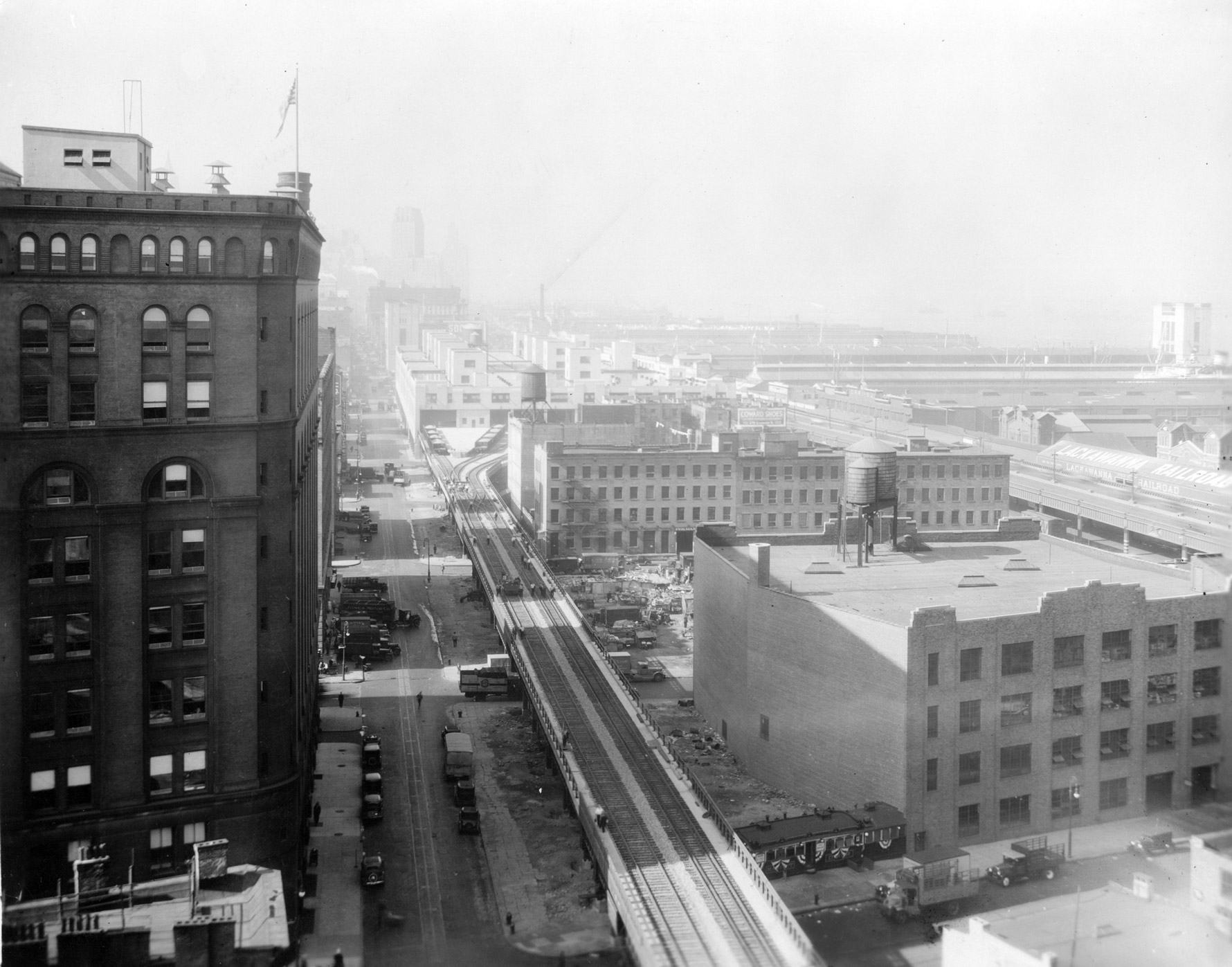 Chelsea in the 1960sKalmbach Library

The 1960s brought a period of decline to Chelsea. The advance of the interstate highway system and the growth of the trucking industry led to a reduction of rail trafﬁc on the High Line and other railroads across the United States, and subsequent drops in industrial jobs. Trains stopped operating below West 12th Street and the southernmost nine blocks of the High Line, from Clarkson Street to Bank Street, were demolished.

In 1970, the Westbeth Building was converted to artists’ housing and was declared a National Historic Landmark in 1975. Even the West Side Highway closed in 1973, “indefinitely,” after the northbound route collapses under the weight of a dump truck. Journalist, author, and activist Jane Jacobs said of the High Line, “the site would be a logical place to build middle income housing.”

According to Richard Cox, “There was a period before the developers when there were ideas but no funding, and you know, just kind of dragged on and on like that. So the 70s it was a bit of a low period for Chelsea.”

But the 70s also saw a new phase for the neighborhood as the center for LGBTQ nightlife; gay clubs and leather bars flourished here, with spaces like Florent, Flaunt, Anvil, and the Mineshaft. They would remain open until the late 1980s, concurrent with the AIDS epidemic that swept and devastated New York City.

In 1980, the last train rolled down the High Line carrying three carloads of frozen turkeys. For the next two decades, the structure remained unused while nature reclaimed it. Seeds were carried in by the wind, birds, and insects, and took root in the structure’s gravel ballast. An entire self-seeded landscape emerged amid the steel railroad tracks, visible only to the few inhabitants in adjacent buildings. 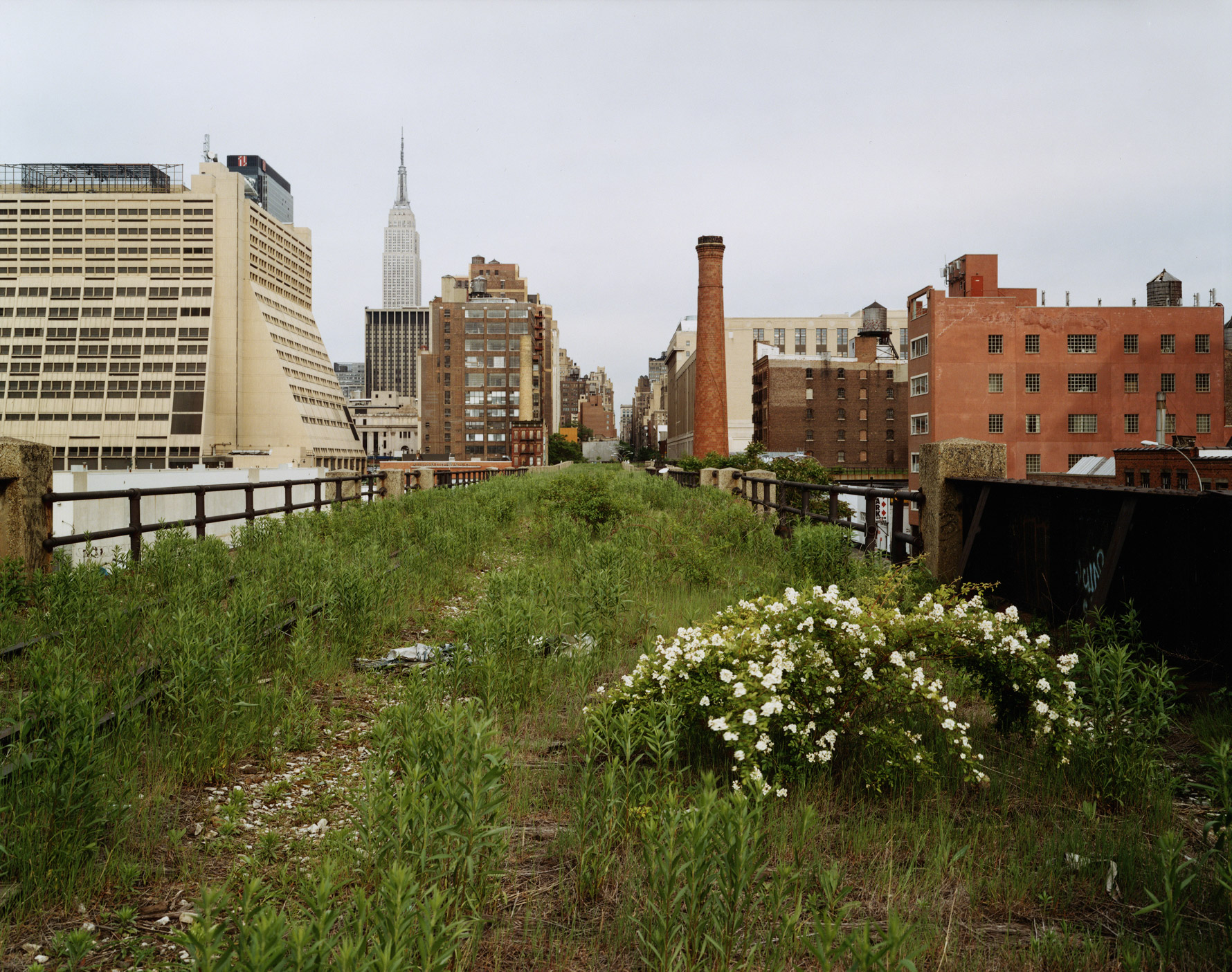 Rosanna and Gabriel had taken their son Richard as a child to the Gansevoort Pier, one of the few accesses to the river, to watch the fishermen on a summer night and had witnessed the High Line being demolished near St Luke’s School where Richard was a student and Rosanna taught dance. In the 70s and 80s there were many meetings of the West 400 Block Association (which Gabriel Zuckerman founded and on which he and Rosanna were the first chairpeople) in the Zuckerman living room about doing something creative with what was left of the High Line. Richard said ‘I remember my parents passionately saying how it might be a great resource for the community…but no one had a design or could figure out funding at that time.’” 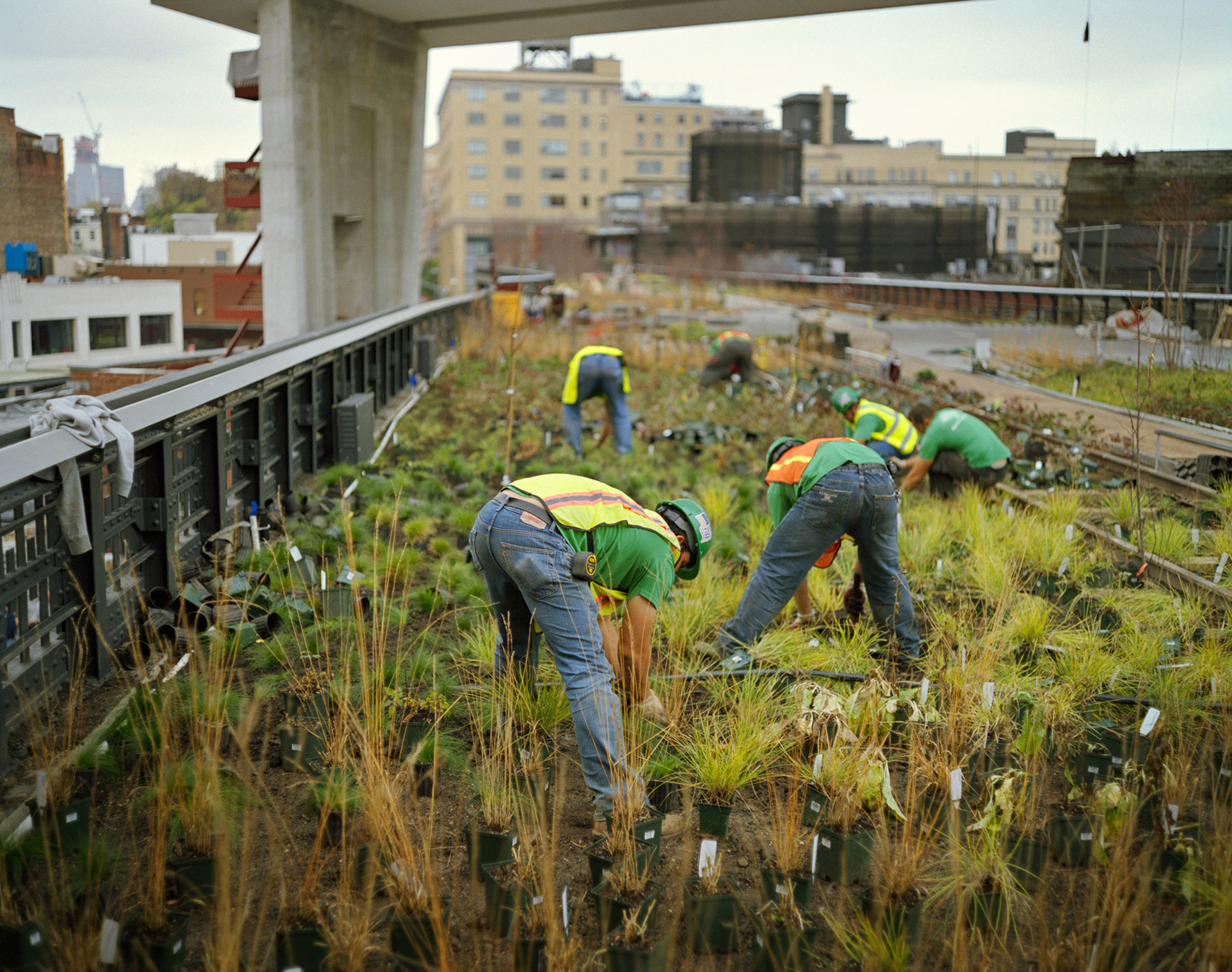 After reading the same article in the New York Times, Robert Hammond and Joshua David met for the first time in 1999 at a community board discussion about the demolition of the High Line. They quickly realized they were the only two interested in saving the rail structure from development, and formed Friends of the High Line to advocate for its preservation. We opened our first section ten years later in 2009.

This year we’re celebrating our 20th anniversary of that community board meeting, the tenth anniversary of opening the park, and Rosanna Cox Zuckerman’s 96th birthday. When asked what she was doing to celebrate, Rosie’s son says, “one thing good thing about living in the same place all your life is when people come to town, they know where to find her.” 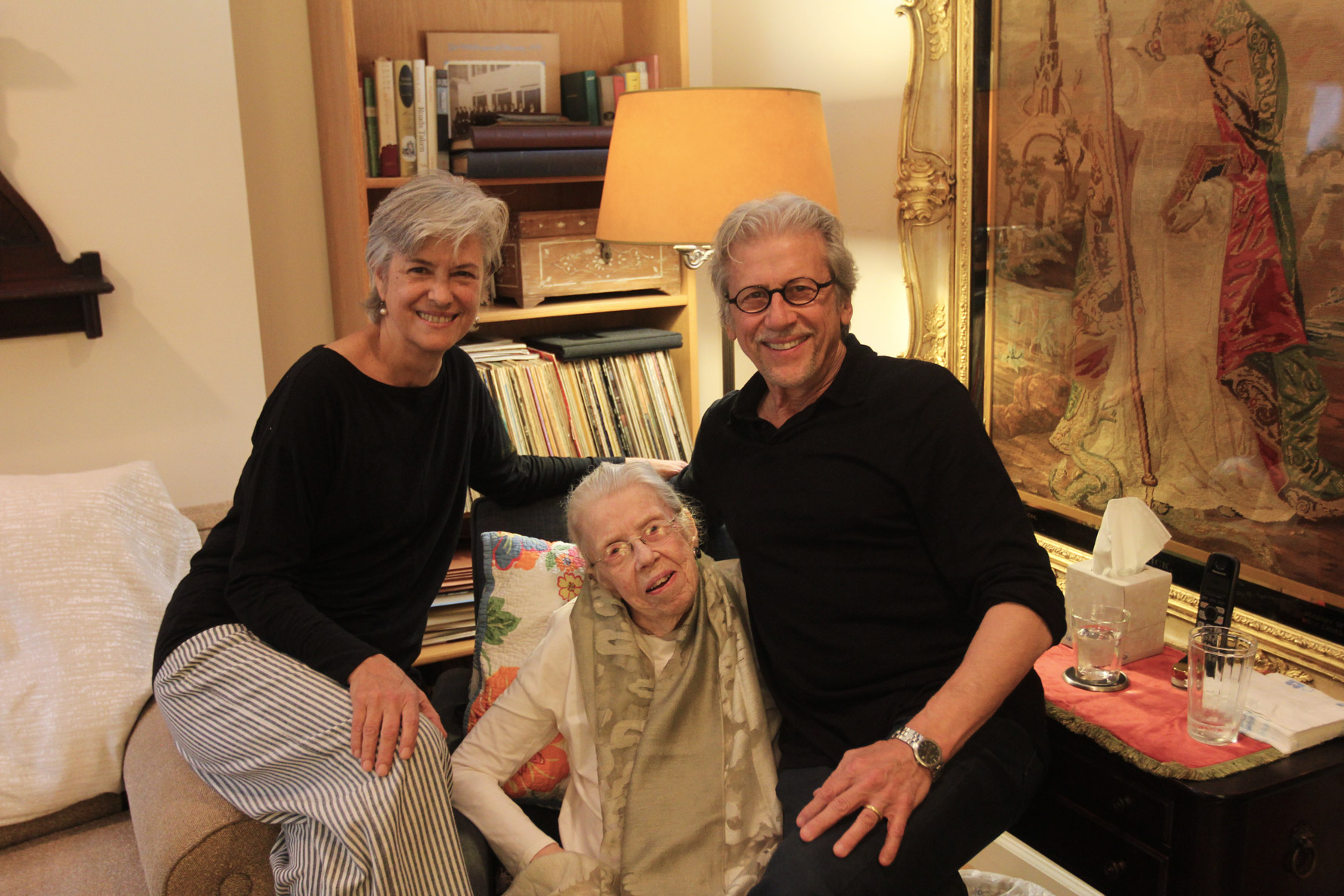