Mushrooms, New Plants, and Homes for Bees: Garden Updates from Our Director of Horticulture

As spring kicks into gear, we spoke with our director of horticulture Eric Rodriguez about our plans for the gardens this year.

You’re our new director of horticulture, as of late last year. Congratulations again. I’m wondering if you could talk about some of the plans you have for 2020?

We’re introducing 15 to 20 new species on the High Line based on areas where we need to have specific microclimate interventions. For example, thinking through the effect of reflective light [from surrounding buildings] on our tree canopies. In addition to just trialing new species for various substitutions in the palette, we need something to perform a similar aesthetic function [to the plant we’re replacing].

We’re going to offer the Green Roof Alliance resilient plants for green roof infrastructure, particularly focusing on woody trees. Because the one thing that you find that’s missing in a lot of green roof design is that woody layer. 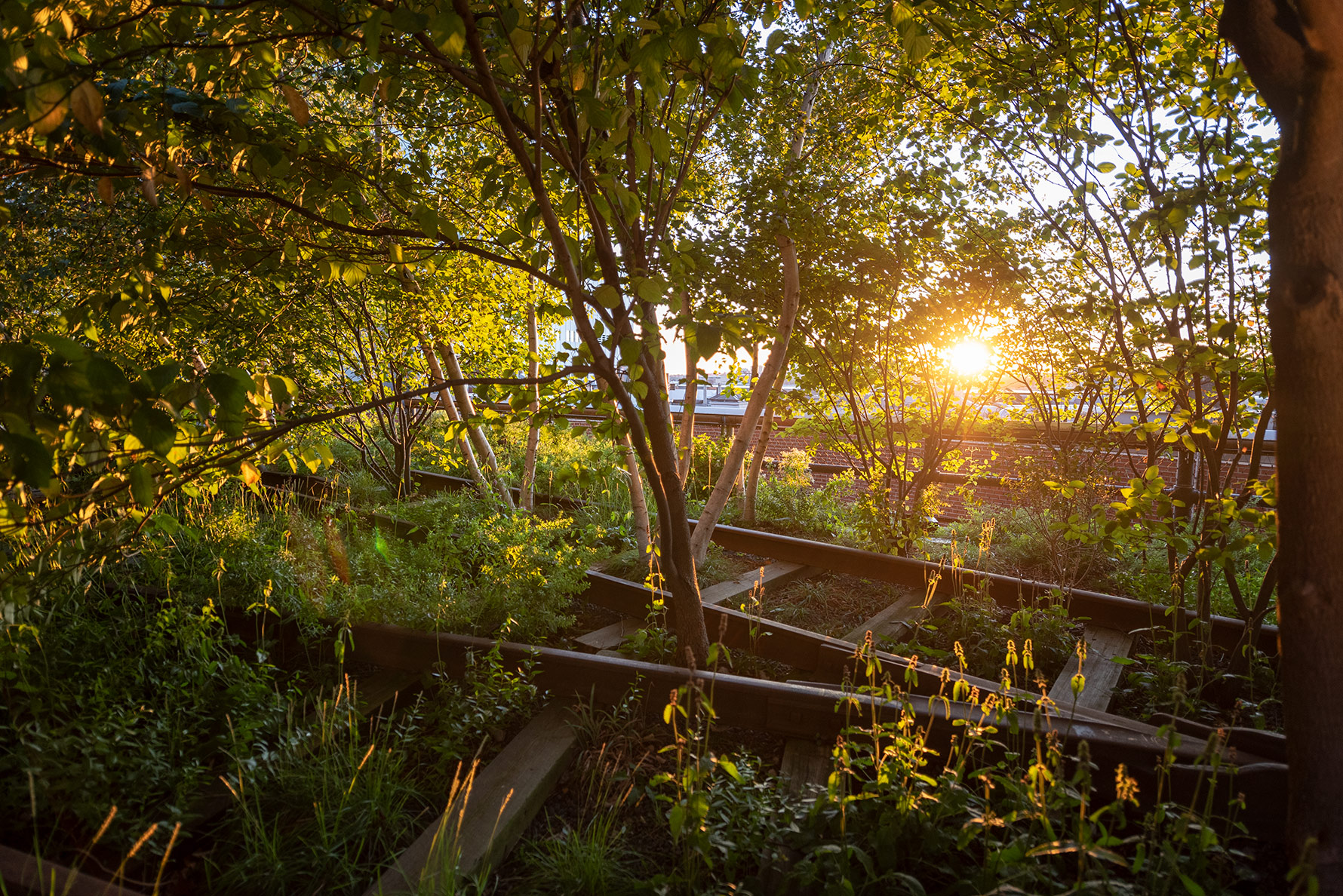 Sun through the treesTimothy Schenck

Are we considered a green roof?

Well, depends on who you talk to. But environmentally we have harsher conditions because we’re fully exposed on four sides.

We tend to be much more exposed to temperature drops, temperature extremes, to wind chill desiccation. In terms of our best practices, and original research, we think the merit in it for green roofs is that we actually have much harsher growing conditions on our park. And so, if it works for us, it can work for you. Just understanding the role of woodys within a larger environmental ecological context, carbon sequestration, bio habitat, species diversification, etc.

That would be such a cool workshop.

Indeed. Can we create our own Farmer’s Almanac for the High Line? Because we find that the Farmer’s Almanac, in terms of the sequence of biological events happening, is pretty spot on. A lot of it is taking tried and true to low tech or old farmer wisdom and making it modern and contextualized for such a pressured growing space like the High Line. 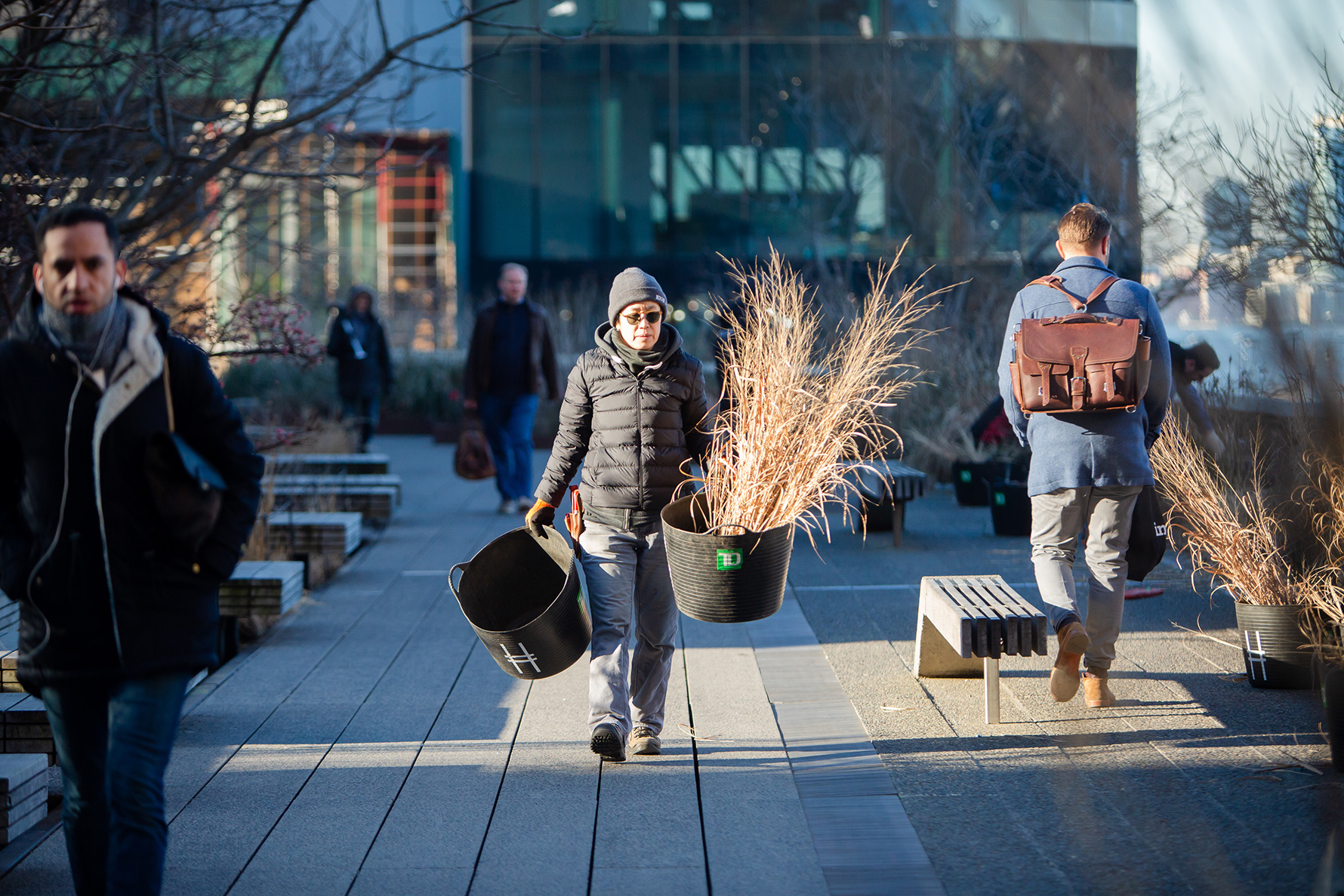 Carrying brush on the parkLiz Ligon

The inspiration was taken from old library card catalogs. What we did was we put seeds in glass test tubes, and they were backlit, so people could pull it out, look at it, read a bit of information, put it back, and then go toward a cabinet door and then search for the individual seeds and then pull them out. But it was the idea of the hands-on archive. Make it less technical and more tangible for people. It’s an easier way, I think, of understanding how people engage with information. For people who are more familiar with the older ways of libraries, like organizing information. It was something that I think would be less intimidating for people if there was a classic with a twist in that way.

We have this rich collection of plants that I think we can spread out into other parts of the community. I think of ourselves as playing a role in international plant conservation with a particular focus on our bio-regional planning conservation of New York City plants.

We also have to recognize that some of our plants here do have the potential for reintroductions into wild areas. For example, the former chief naturalist for NYC Parks and now the lead for the naturalist certification program at NYBG, Mike Feller, identified a species of milkweed here that he said was only growing in three other locations in New York City, and they were all pretty much decimated. He asked us if we can provide them with seeds for reintroduction. And if we knew the original vendor where we source those seeds, or source those plants. Because we picked plants from the right places, our stock tends to be healthy. There are some species that are thriving better here than they do than they would in their own area. In terms of introducing new genetic stock of plants that are highly adapted to extreme conditions, we think there’s a unique opportunity of being able to support that work.

What about building on what we’re doing here with supporting pollinators and sustainable practices?

We’re using mushrooms for breaking down some of our Spring Cutback debris. We’re tinkering with growing oyster mushrooms. We’re growing them on fallen trees, and inoculating the log with shitake mushrooms. Not just because it would be a cool thing for us to do but also thinking through our teen program, and people and members of the general public who are interested in the culinary aspect of the edible aspect of it.

We also have the bee hotels—we’ve identified a design firm who have designed specifically around protecting of native bees and pollinator habitats. It’s totally in line with the High Line and what is High Line and what is not because it’s very clean. It’s very sophisticated. But its functionality has been built into it to serve the pollinator preservation. In addition to these, we’re making DIY bee hotels using logs from the park, too. 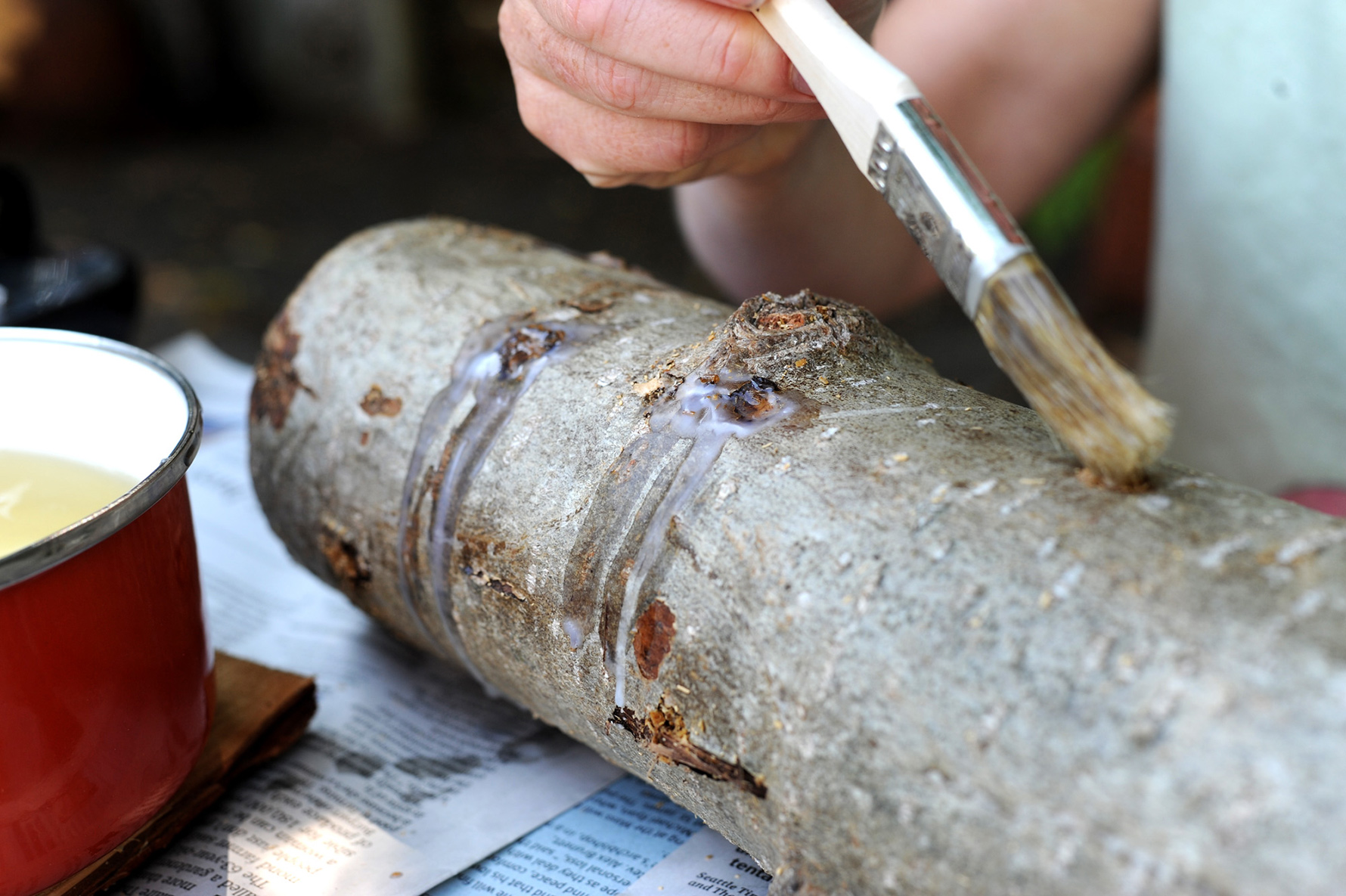 Can you talk about the Sustainable Gardens Project a bit?

We just rolled out the Sustainable Gardens Project, specifically to reach different types of people who have different types of interests who are all approaching various intersections of environmentalism, horticulture, pollinators, and gardens. To find more commonalities than differences. Historically, part of what framed the conversation that led to creating that project was that there are these camps within horticulture that don’t necessarily talk to each other. They are the people who are into environmentalism and wild plants, and are not necessarily focused on ornamental gardens, then there are the ornamental garden folks who are only interested in design and aesthetics and are not necessarily into the human need aspect of it, there are urban agriculture folk who are very keen on the human need aspect of it, but tend to approach things as if there isn’t a very specific human function about it then it’s not necessarily worth the time or the engagement.

What we recognized was, there’s a way to bring people together to have that conversation where food justice advocates might also integrate environmental justice or provide more habitat. Or air purification and carbon sequestration could be a fascinating intersection. I want to get the ornamental folk thinking more in terms of things like medicinal plants and the human need of it.

And also to see how they’ll collaborate with each other, and reinvent their needs, and how when they get out into their communities, will implement these things. Not that these projects would mesh together, but that people would find commonalities and reiterate their work based on that, and maybe work together outside of that. We can help advance some of it through our resources, and our ability to leverage different actors in different fields. Because it’s a pilot, we also don’t know what to expect, and that to me is really, really exciting.