To a Resilient New York: Notes from Quarantine

As we move through and past this global pandemic, we’re asking our community of artists to help us navigate this moment—historically, emotionally, collectively, and spiritually. To a Resilient New York: Notes from Quarantine is a series of reflections on daily life under Covid-19.

Using a surrealist tradition, we invited artists or writers to start an exquisite assemblage poem based on the theme of interdependence—how our lives are intimately intertwined and mutually reliant on one another. They were asked to respond in 20 words or less. They then told us another artist or writer to invite to continue the sequence for three rounds total: a beginning, middle, and end. The result is six poems by 18 artists. Because each of the participants were unaware of the other collaborators’ contributions, the poems often contain surprising connections.

As Toni Morrison reminds us in her essay “No Place for Self-Pity, No Room for Fear” in The Nation, “This is precisely the time when artists go to work. There is no time for despair, no place for self-pity, no need for silence, no room for fear. We speak, we write, we do language. That is how civilizations heal.” 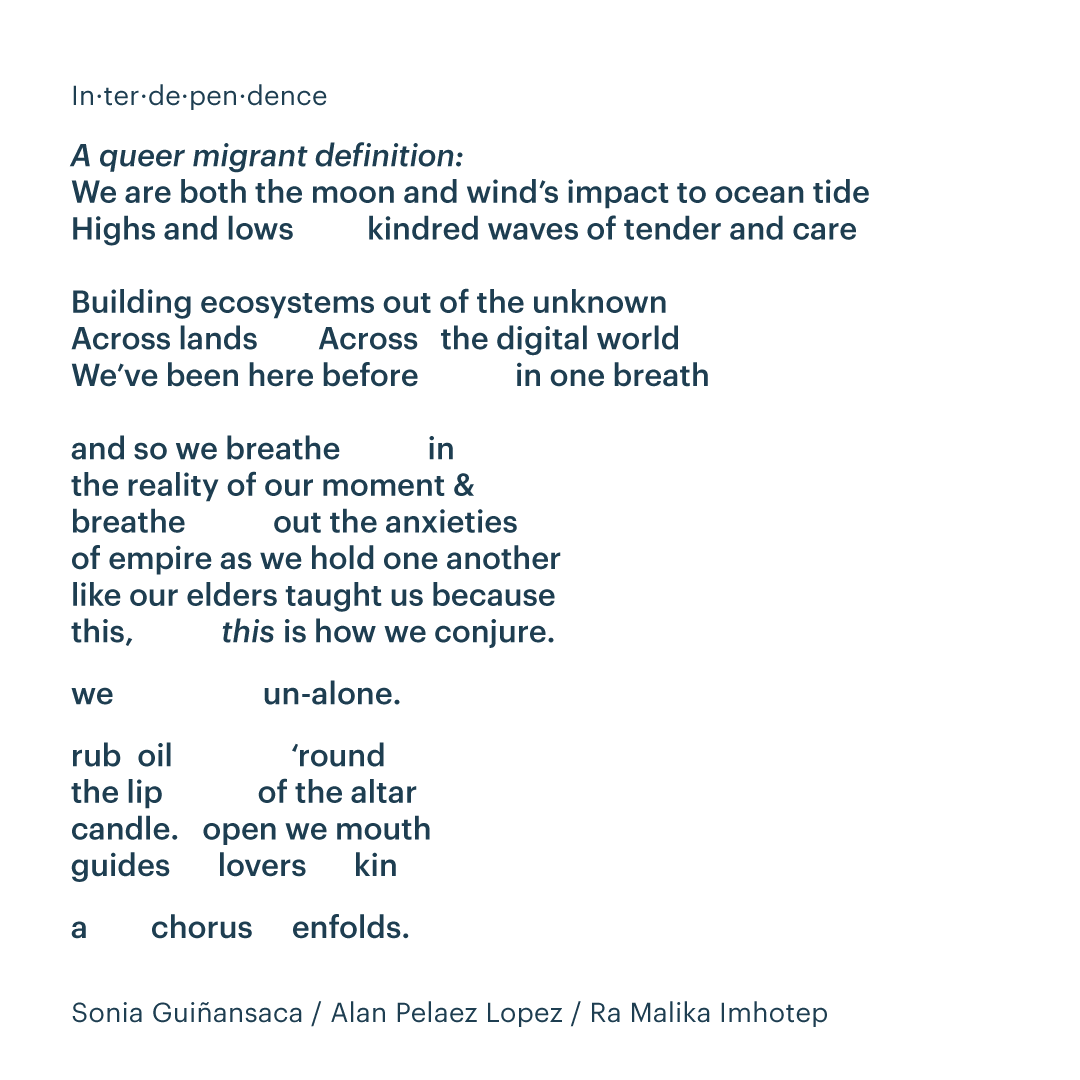 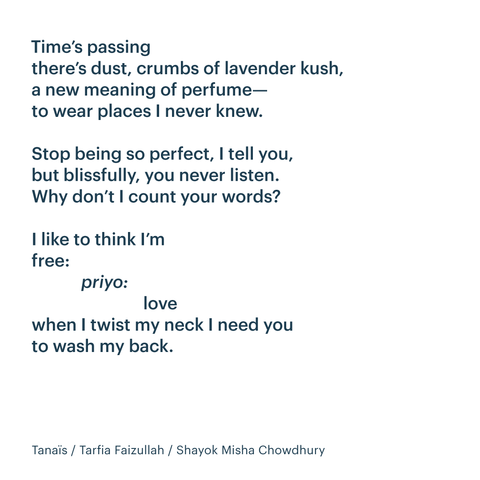 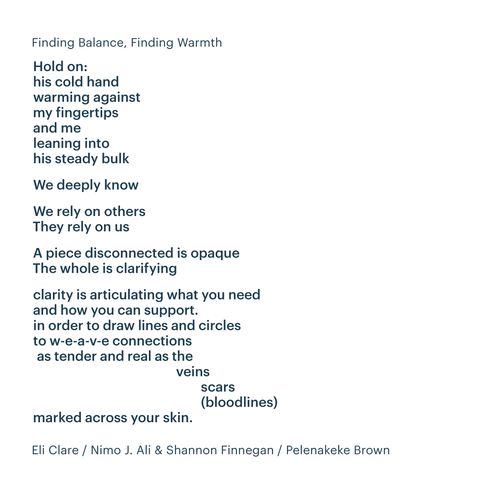 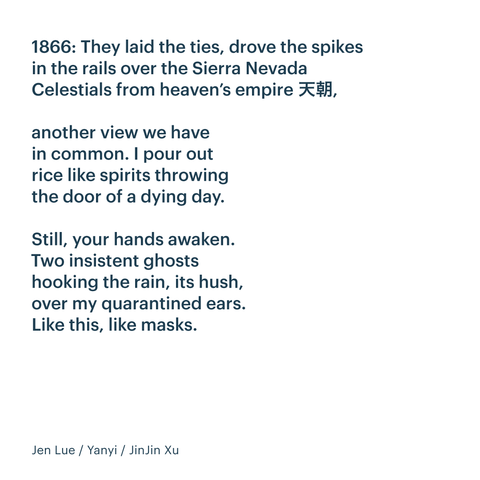 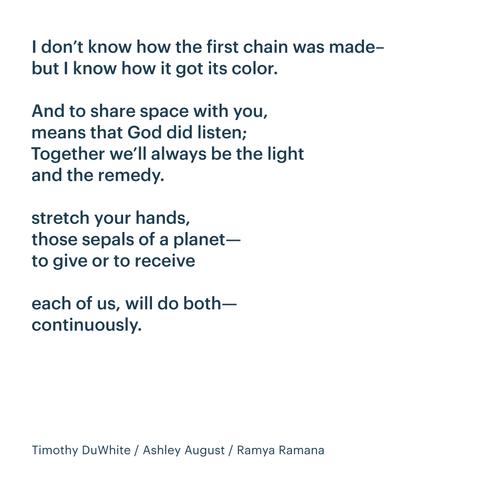 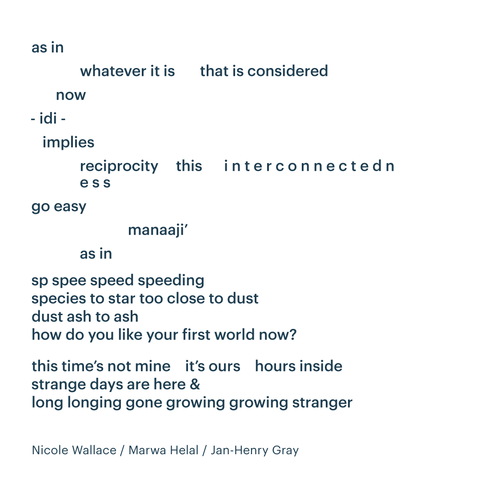 How to make your own poem assemblage:

Timothy DuWhite is a Black, queer, poz-writer/artist based out of Brooklyn, NY. A majority of his work circles around the intersections of state and body, state and love, and state and mind. All Timothy desires is a different/newer world and believes the written word is one tool that could be used towards achieving that goal.

Along with multiple television/film appearances and country-wide theatrical and poetic performances, her credits include SundanceTV, Cannes Film Festival, Netflix, Al Jazeera America, the GAP, HBO, and Netflix. She is the former curator and slam master of the legendary Bowery Poetry Club. With Belize and Brooklyn embedded into her (he)art, August is motivated to speak the unsaid truth and push the boundaries of media, the write word and performance to realms they’ve yet to live in.

Ramya Ramana is an Indian American poet and New York native who has performed at over 200 venues in one year as the Youth Poet Laureate of NYC and was mentioned in the New York Times, Wall Street Journal, Brown Girl Magazine, and many more. Ramana released her first manuscript, Don’t Drown Her in the Baptism, a collection of poems exploring femininity, faith, and race. As a first-generation Indian American, Ramana’s work illustrates both the immigrant experience and exploring existentialism. Ramana is currently receiving her MFA in poetry at The New School.

Nicole Wallace is the author of WAASAMOWIN (IMP, October 2019) and was a 2019 Poets House Emerging Poets Fellow. She is the managing director of the Poetry Project and a member of the Indigenous Kinship Collective. Recent work can be read in print in Survivance: Indigenous Poesis Vol. IV zine and online at A Gathering of The Tribes, LitHub, and A Perfect Vacuum. Originally from Gakaabikaang, located in what is currently called Minnesota, she is of settler/European ancestry and a descendent of the Fond du Lac Band of Lake Superior Chippewa (Ojibwe).

Marwa Helal is a poet and journalist. She is the author of Invasive species (Nightboat Books, 2019) and winner of BOMB magazine’s Biennial 2016 Poetry Contest. She has been awarded fellowships from Poets House, Brooklyn Poets, Cave Canem, and is a Jerome Hill Artist Fellow. Helal has presented her work at the Museum of Modern Art (MoMA), the Studio Museum in Harlem, and the Brooklyn Museum. Born in Al Mansurah, Egypt, Helal currently lives and teaches in Brooklyn, New York. She received her MFA in creative nonfiction from The New School and her BA in journalism and international studies from Ohio Wesleyan University. More at marshelal.com

Jan-Henry Gray’s first book, Documents (BOA Editions, Ltd. 2019), was chosen by D.A. Powell as the winner of BOA Editions’ 2018 Poulin Poetry Prize. Jan is a Kundiman fellow and a visiting assistant professor at Adelphi University. Born in the Philippines, he grew up in San Francisco and currently lives in Brooklyn.

Tanaïs (née Tanwi Nandini Islam) is the author of the novel Bright Lines (Penguin, 2015), which was a finalist for the Center for Fiction First Novel Prize, the Edmund White Debut Fiction Award, the Brooklyn Eagles Literary Prize. They are the founder of the independent beauty and fragrance house Hi Wildflower, and their forthcoming essay collection, In Sensorium (HMH 2021), explores scent, sensuality, South Asian and Muslim perfume cultures, and the environmental and border crises around the world.

Tarfia Faizullah is the author of two poetry collections, Registers of Illuminated Villages (Graywolf, 2018) and Seam (SIU, 2014). The recipient of a Fulbright fellowship, three Pushcart prizes, and other honors, Tarfia has been featured in periodicals, magazines, and anthologies both here and abroad. Tarfia presents work at institutions and organizations worldwide, and collaborations include photographers, producers, composers, filmmakers, musicians, and visual artists, resulting in several interdisciplinary projects, including an EP, Eat More Mango. In 2016, Tarfia was recognized by Harvard Law School as one of 50 Women Inspiring Change. Tarfia is a 2019 United States Artists Fellow.

Sonia Guiñansaca is an international award-winning queer migrant poet, cultural organizer, and social justice activist. They emerged as a national leader in the migrant artistic and political communities where they coordinated and participated in groundbreaking civil disobedience actions. Guiñansaca co-founded some of the largest undocumented organizations in the US, including some of the first artistic projects by and for undocumented writers and artists. Sonia has worked for over a decade in both policy and cultural efforts to build equitable infrastructures for migrant artists. They have been awarded residencies and fellowships from Voices of Our Nation Arts Foundation, the Poetry Foundation, the British Council, and the Hemispheric Institute for Performance and Politics. Guiñansaca has performed at the Met, the Public Theater, Lehmann Maupin Gallery, and has been featured on PEN American, Interview, Ms, Teen Vogue, DIVA, and PBS, to name a few. Sonia self-published Nostalgia and Borders in 2016, and in 2020 is releasing #PapiFemme and launching Alegria Press, a publishing house for undocumented writers. Soniaguinansaca.com Twitter/IG: @TheSoniaG

Alan Paez is an Afro Indigenous poet, installation, and adornment artist from Oaxaca, México. They live in Oakland, CA and the internet as @MigrantScribble.

Ra Malika Imhotep is a Black feminist writer + performance artist from Atlanta, Georgia, currently pursuing a doctoral degree in African Diaspora Studies at the University of California, Berkeley. Her intellectual + creative work tends to the relationships between queer articulations of Black femininity, vernacular culture and the performance of labor in The Dirty South. She is co-convener of The Church of Black Feminist Thought, an embodied spiritual-political education project, and a member of the curatorial collective The Black Aesthetic. She is the 2019 recipient of the Toni Beauchamp Prize in Critical Art Writing.

Jen Lue is a Kundiman fellow and a 2018-19 Margins Fellow at Asian American Writers’ Workshop.

Yanyi is a writer and critic. He is the author of Dream of the Divided Field (One World, Random House, forthcoming 2022) and The Year of Blue Water (Yale University Press, 2019), winner of the 2018 Yale Series of Younger Poets Prize. His work has been featured in NPR’s All Things Considered, Tin House, Granta, and A Public Space, and he is the recipient of fellowships from Asian American Writers’ Workshop and Poets House. Currently, he is poetry editor at Foundry and a poetry review editor at Public Books. Find him at yanyiii.com.

JinJin Xu is a writer and filmmaker from Shanghai. Her poetry and nonfiction essays have been published in The Common, Women Studies Quarterly, The Margins, and her films have shown at Berlin’s Harun Farocki Institute. She is currently an MFA candidate at NYU, where she received the Lillian Vernon Fellowship. After spending a year traveling as a Thomas J. Watson Fellow, she is working on a docupoetics project collaborating with women dislocated as refugees and migrant workers.

White, disabled, and genderqueer, Eli Clare lives near Lake Champlain in occupied Abenaki territory (currently known as Vermont) where he writes and proudly claims a penchant for rabble-rousing. He has written two books of creative nonfiction, Brilliant Imperfection: Grappling with Cure and Exile and Pride: Disability, Queerness, and Liberation, a collection of poetry, The Marrow’s Telling: Words in Motion, and has been published in many periodicals and anthologies. Eli speaks, teaches, and facilitates all over the United States and Canada at conferences, community events, and colleges about disability, queer and trans identities, and social justice. Among other pursuits, he has walked across the United States for peace, coordinated a rape prevention program, and helped organize the first ever Queerness and Disability Conference.

Nimo J. Ali and Shannon Finnegan are two friends who live in Brooklyn, NY. They both enjoy reading, writing, and talking about friendship, community, and futures that are different from the present. Nimo writes, cooks, and works in education. Shannon is an artist and enjoys doing puzzles.

Pelenakeke Brown is an interdisciplinary artist from Aotearoa (New Zealand) of Samoan/Pakeha heritage. Her work infuses drawing, poetry, and performance to explore the intersections and connections between disability and Samoan concepts. She has worked with the Metropolitan Museum of Art, the Goethe Institute, Gibney Dance, Movement Research, and other institutions across the globe. She is a 2020 Eyebeam artist-in-residence.

High Line Programs and accessibility are made possible, in part, with public funds from the New York City Council, under the leadership of Speaker Corey Johnson.