What’s the buzz about bees? How cities play a role in bee conservation

Bees have been in the headlines lately! There’s lots of buzz about so-called “murder” hornets, pandemic beekeeping, and how neonicotinoids (a commonly used pesticide) damage bee colonies. A common thread throughout all these articles is how deeply people care about conservation. Yet surprisingly, these essays often touch on just one species of bee—the European Honey Bee. European Honey Bees are fascinating insects, but there is so much more complexity in the world of bees than one might realize if focusing just on a single species.

In New York State alone, there are over 400 distinct species of bee! From charming bumble bees, iridescent sweat bees, tiny leafcutter bees, mud-loving mason bees, and more, the diversity of this group of insects is awe-inspiring. Many of these diverse native bees are at-risk for extinction, mostly due to habitat loss, climate change and pesticide use. These distinct pollinators represent plant-insect relationships that predate human life on this planet, having evolved over centuries to play unique roles in our ecosystem. Most of these bees are considered wild, meaning they have not been domesticated for human use in agriculture. In fact many species of wild bee are not domesticable because they are solitary as opposed to social. This is different from the European Honey Bee, which was imported to North America in order to utilize beeswax for candle making. Eventually, European Honey Bees became widely used as agricultural tools, supporting pollination on farms and orchards. Recent studies have actually shown that European Honey Bees are less efficient pollinators than some of their North American counterparts, and that across the board, diverse communities of bees in a landscape yielded significantly improved harvests.

While honey bees live in hives, and can be kept in boxes on urban rooftops, wild bees have specific needs for their nests—some nesting underground, others in the pithy stems of perennial plants, at the bases of bunch grasses, or in fallen logs and branches. Agriculture in the US has become focused on single-crop farms, which unintentionally devastate wild populations of insects and wildlife as habitat is destroyed and pesticide use is rampant. This loss of rural diversity means that cities are more important than ever for native insects; they can provide well-managed parks, community gardens, bioswales, etc., that become havens for endangered and threatened insects. Urban parks and undeveloped land can provide sanctuary for native bees, especially when ecological practices are implemented, like on-site composting for woody debris, pesticide bans, and the widespread use of native plants. 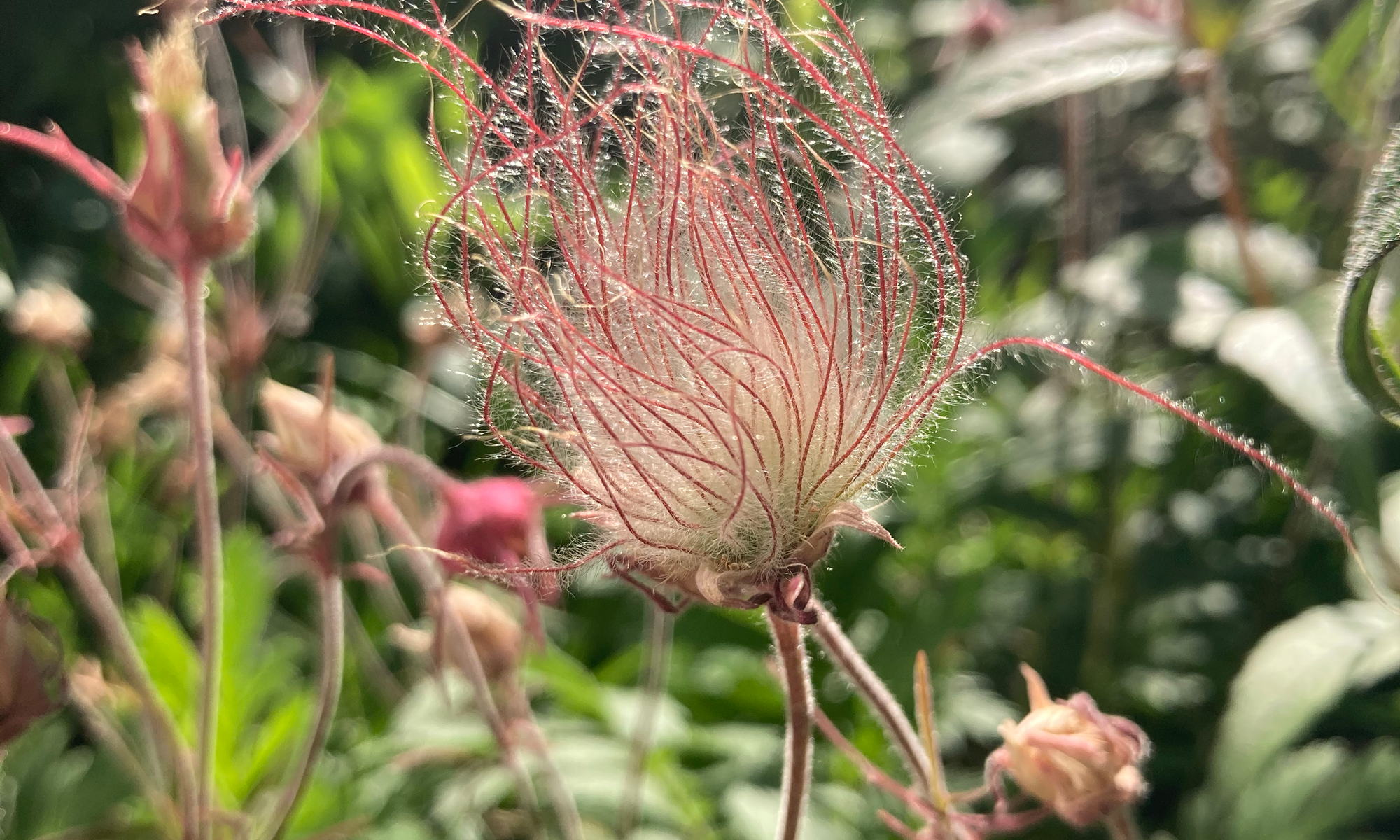 In New York State, our native bees are a diverse group of creatures. They forage on plants that honey bees can’t pollinate, like tomatoes, or beautiful perennials such as prairie smoke (Geum triflorum) or shooting star (Dodecatheon meadia). While one might assume that there are enough flowers to go around, the unfortunate reality is that native bees are forced to compete with honey bees for nectar and pollen. Most native bees are solitary, and make seasonal nests annually, whereas a single honey bee hive contains vastly more individuals than even a robust native bee nest. Honey bee hives are perennial, so they start the season with significantly more individuals than bumble bees, whose life cycle renews annually with a single queen laying her brood after winter dormancy. That bumble bee queen will awake early in the spring, having used her reserved fat stores, in need of flower nectar. She’s got competition for those first spring blooms! Once she’s regained energy, the queen bee will search for a nest site. At the High Line, I frequently have spotted queens nesting in the tussocky grass of Carex bromoides, Brome-like Sedge. After choosing a suitable nest site, the queen will forage for pollen resources for herself and the egg that will soon hatch into bumble bee larvae. You can spot them, too – if you see a large, fuzzy bumble bee early in the season, it’s likely to be a queen.

Honey bees have between 20,000 and 80,000 worker bees in a single hive, whereas the Common Eastern Bumble bee nests contain closer to 300 to 500 individuals. Bumble bees would need a lot of nests to be close to matching those numbers. While a honey bee hive may make sense for a large-scale orchard, where there is an abundance of flowers in need of rapid pollination, the resources in a city can quickly become strained. Native bees forage from spring to fall, as soon as temperatures stay consistently above 55 degrees Fahrenheit. That early in the spring, there’s much less in bloom, and the ability to find a meal becomes much more difficult for our native bees—especially if our gardens are catering to non-native bees, by focusing on imported ornamental plants like crocuses and daffodils, or housing an abundance of honey bees. Bees living a solitary life make up the vast majority of species in North America, at over 90% of all bees. For these individuals, the further they have to travel to forage, the fewer offspring they can provide for, and then fewer bees will be born the following year. Year after year, this may lead to declines in bees.

Honey bees are fascinating creatures, and they are important resources for agriculture as well as education. They are uniquely social, and their hives are examples of social altruism in the animal world. In turn, beekeepers are indefatigable stewards of their hives, as well as advocates for organic gardening. Many people believe keeping bees supports conservation movements, and as wonderful as honey bees are, their presence does not support other pollinator communities, especially in the US, where honey bees are an introduced species that haven’t evolved alongside other native pollinators. Beekeeping is understood as a simple and easy way to support insect communities, but the reality is that ecosystems are always complex, and solutions need to be nuanced in response.

Deep concern and eagerness blossomed around the plea to “save the bees” in recent years, with many heeding the call to advocate for honey bees. In so pervasively tending to and protecting honey bees, we have indeed helped boost their population numbers. However, at present, in continuing full speed ahead with honey bee-focused efforts, we now are risking serious harm to native bees. I would challenge us to now embrace a broader understanding of saving the bees, to expand into protecting wild bees as fervently as their honey bee cousins. Beekeepers and conservationists can work together to educate the public about the struggles all pollinators face, and advocate side-by-side for solutions that push conservation movements forward. Insect biodiversity helps gardens, and studies have shown that diverse populations of bees yield higher agricultural productivity than areas with fewer bee species present. 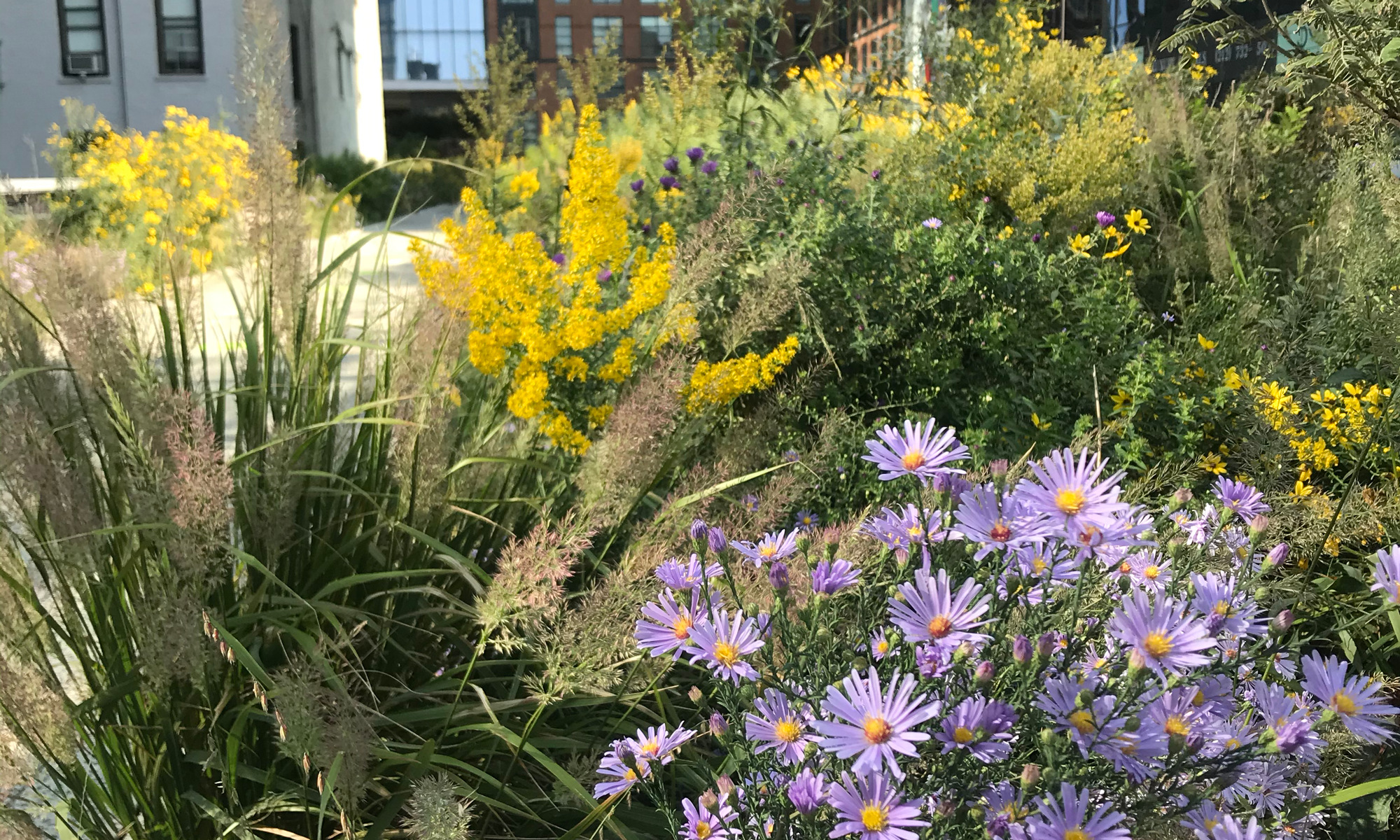 One thing everyone can agree on is the need for more ecologically-friendly practices in our cities. We can plant native plants with blooms far beyond just the summer months, to support early spring and late fall foraging. A popular combination of native goldenrods and asters (I’m especially fond of showy goldenrod, Solidago speciosa, with smooth aster, Symphyotrichum laeve) provide excellent sources of pollen for bumble bee queens preparing to hibernate. Tulips and daffodils are certainly beautiful, but when it comes to supporting native bees, early spring plants like trout lily and pussywillow provide superior foraging resources. Discontinuing the use of pesticides, especially neonicotinoids, in favor of organic garden management practices, can save money as well as insect populations.

At the High Line, we leave perennial material in place over winter, providing nesting habitat for dormant insects as well as winter interest in the garden. Come spring, I wait as long as possible before removing the previous year’s material, tucking it safely away in the garden beds so that any insects still inside don’t accidentally get destroyed in a commercial compost pile. I use last year’s leaf material as natural mulch, disturbing it as little as possible so as to preserve the butterfly cocoons and firefly larvae in the process. The High Line has a stunning collection of plants, with over 600 species in 1.4 miles. I take care of the Wildflower Field, which has 92 distinct kinds of plants in just three city blocks. Our team sources plants from local nurseries, and we prioritize ecological relationships in plant species selection. We have plants for bees that have evolved specialized relationships with particular plants, as well as crowd favorites. In 2017, the Horticulture department partnered with the American Museum of Natural History to do a bee survey, and found 30 species present in the park! We are constantly updating our best practices to follow new science, and it is my fervent hope that we will have even more species diversity in the next five years.

Scout Kerensky-Coodley is a High Line gardener and insect enthusiast who cares for the Wildflower Field (27th – 30th Streets). Scout worked as an educator before becoming a horticulturist and is passionate about conservation, biodiversity, pollinators, and public gardening.