On the High Line, textures, forms, and shapes become prominent this season, and the rattlesnake master, Eryngium yuccifolium, exemplifies these design principles.

The genus name, Eryngium, references the thistle-like appearance of the flowers. Its specific epithet of yuccifolium calls attention to its yucca-like leaves. Eryngium yuccifolium is an herbaceous perennial with an average height of three to five feet, with a spread of two to three feet. Typically in bloom on the High Line in July, August, and September, the flowers are sphere-shaped inflorescences of pale green, white, or chartreuse that have a smell similar to honey. 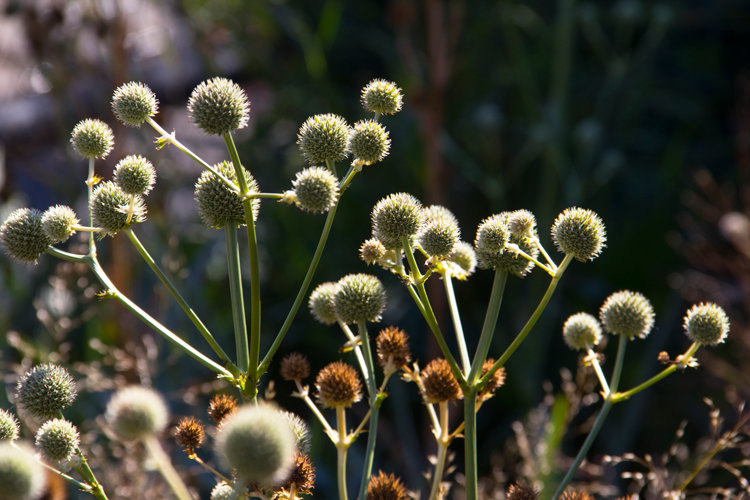 The blooms attract a wide variety of insect life to a garden, though on the High Line in autumn they are prized more for the ornamental quality of its dried seedheads that persist throughout the winter. The sword-like leaves are bluish-green, covered in a waxy cuticle that prevents desiccation. It’s a member of the carrot family, Apiaceae, whose flowers are noted for their appeal to pollinating insects. 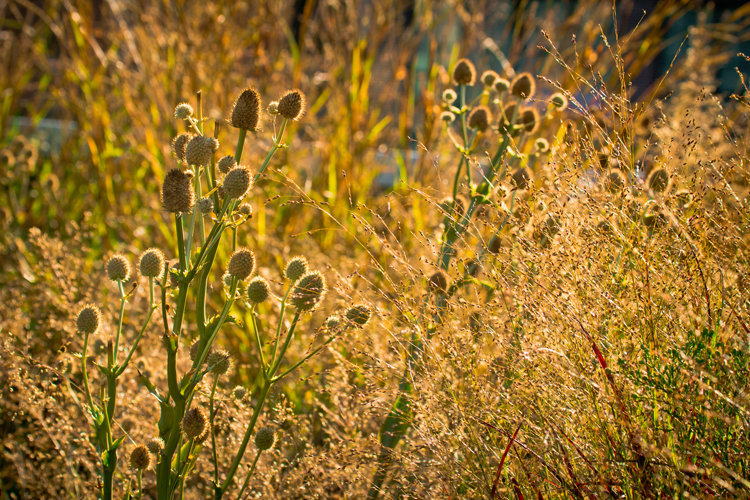 It’s native to the tallgrass prairies of Central North America, from Minnesota east to Ohio, south to Florida and Texas, with some distribution in Connecticut, Maryland, Delaware and New Jersey. Tallgrass prairies are characterized by both natural and human disturbances, such as animal grazing and fires, which keep larger woody trees and shrubs from colonizing the landscape. Rattlesnake master finds an ecological niche there, establishing itself in colonies landscape.

Erynigium yuccifolium loves full sun locations with good drainage. It performs well in soils that are not too nutrient-rich, but will tolerate soils with a higher organic content once the plant has established. It’s a vigorous self-sower, and gradually fills in space in the garden with many seedlings in the spring. Rattlesnake master has a taproot root system that is well-suited to conditions of drought and temperature extremes but doesn’t like disturbance, so plants should only be divided or moved in spring or fall when the plant is first entering active growth or beginning to enter dormancy. Once established, it’s quite vigorous, and will thrive in a garden setting with little intervention.

WHERE TO FIND THIS PLANT

Eryngium yuccifolium can be found growing in the Woodland Edge and Washington Grasslands, from Gansevoort to 14th streets.