In 2009, “C.R.E.A.M.,” the single from Wu-Tang Clan’s debut studio album Enter the Wu-Tang Clan, (36 Chambers), went certified Gold by the RIAA 15 years after it was first released. The lyrics of “C.R.E.A.M.” (an acronym for Cash Rules Everything Around Me and the hook to the song) describe a young Black male cycling through racist economic systems: growing up poor, running drugs to get by and get rich, subsequent champagne and Cadillacs, prison time, and ending up in the hustle all over again:

A man with a dream with plans to make cream
Which failed; I went to jail at the age of fifteen
A young buck sellin’ drugs and such, who never had much
Tryin’ to get a clutch at what I could not
The court played me short, now I face incarceration
Pacin’, goin’ upstate’s my destination
Handcuffed in the back of a bus, forty of us
Life as a shorty shouldn’t be so rough
But as the world turned I learned life is hell
Livin’ in the world no different from a cell.

Twenty-five years after “C.R.E.A.M.” first aired on the radio the artist and writer Sable Elyse Smith grapples with the song’s same issues, which remain just as relevant today: a prison system that hinges on the trap of poverty and racism. Smith examines these issues in three projects, all entitled C.R.E.A.M.—an artwork in the form of a sign installed on the High Line for the group show Agora that reads “IRONWOODLAND,” a reference to the bygone all-white development community in Los Angeles and to the Ironwood prison where her father was once incarcerated; a book with Wendy’s Subway that features writing by Jessica Lynne and A. H. Jerriod Avant, found images, and Smith’s own writing; and a collaborative event hosted at the Kitchen featuring music, performances, and readings by Jibade-Khalil Huffman, Simone White, Bonita Oliver, A. H. Jerriod Avant, and Smith. 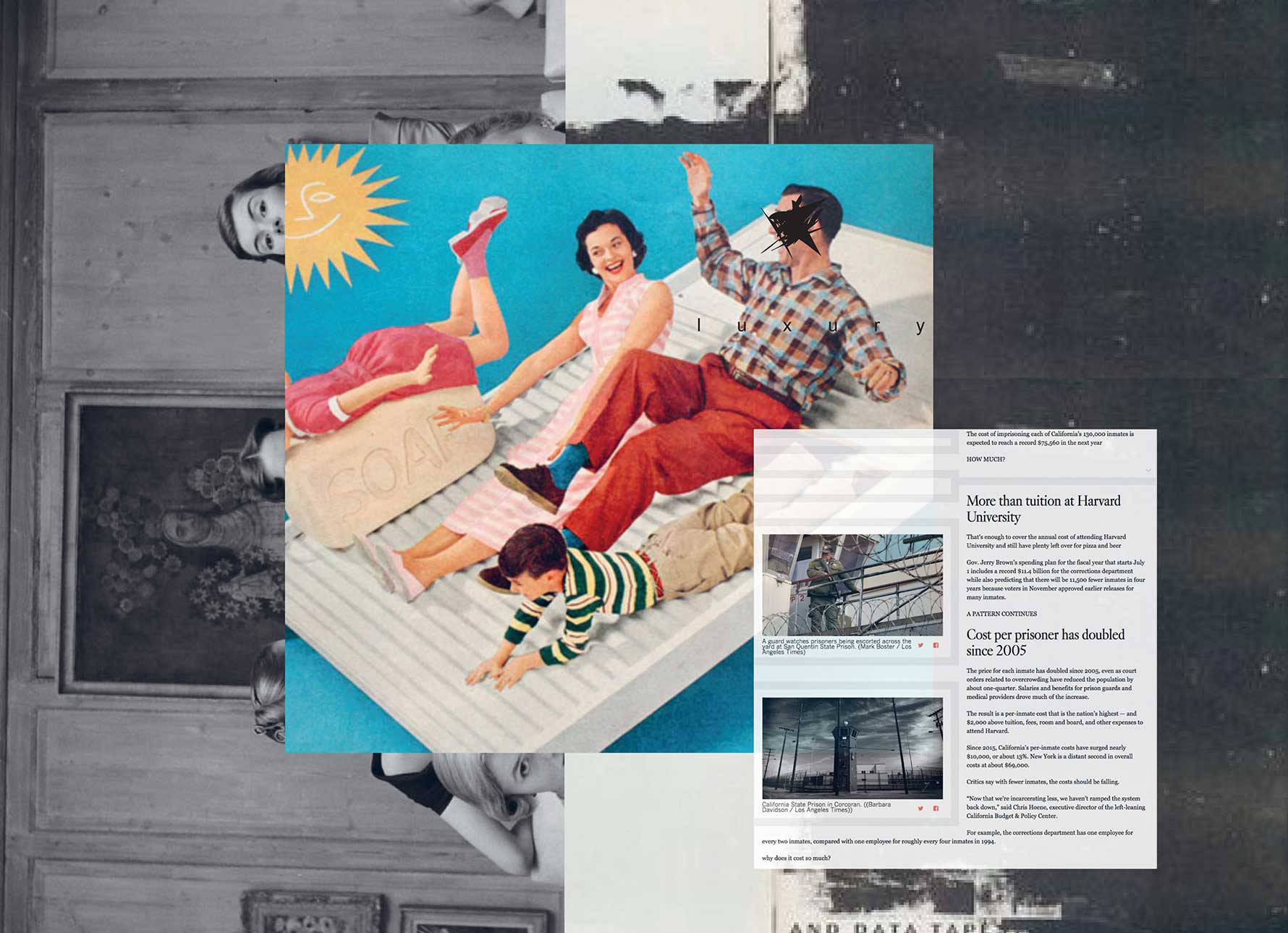 Like mass incarceration itself, there are many ways of reading all the versions of “C.R.E.A.M.,” all of them equally complex. By using a pop culture reference in these works, Smith draws attention to the ubiquitous, almost banally repetitive, representations of Black incarceration. She also provides an entry point to the entangled realities of the US prison system.

When it hit the airwaves, the sound, lyrics, and concept of Wu-Tang’s “C.R.E.A.M.” changed the landscape of hip-hop forever. Wu-Tang Clan was made up of nine rappers: the RZA, DJ 4th Disciple, rappers Method Man, Ol’ Dirty Bastard, U God, Rebel Ins, Raekwon, Ghostface Killah, and Genius “the GZA.” The group of childhood friends from Staten Island, or Shaolin as they called it, gathered around a collective obsession with Kung Fu and rap.

Together they declared a new mentality: rap should keep it real. “C.R.E.A.M.” dispelled the fantasy of a rapper’s untouchable, gold-flecked high life and instead waxed on the realities of living as a Black male in the United States. One could be a gangster, but the likelier ending would be imprisonment, or worse.

For Wu, money rules the streets but is not freedom; rather money is yet another prison. The song drills in that cash and economics rule the prison system in this country; and that these systems are the bedfellows of Jim Crow. The United States has the largest prison population in the world with over 2.3 million people in 1,719 state prisons, 102 federal prisons, 1,852 juvenile correctional facilities, 3,163 local jails, and 80 Native American county jails (not to mention military prisons, immigration detention centers, state psychology hospitals, and prisons in US territories). While Black people only make up 13% of the entire US population, they represent 40% of the prison population.

Growing up poor and Black informed every aspect of the song, and their entire debut album. The lack of studio polish and the group’s use of cheap production equipment not only expounded upon this reality, but made the work, and Wu-Tang, all the more resonant. The resulting sound of “C.R.E.A.M.” is somber and gritty, and exposes the isolated, trapped feeling of growing up Black in the United States.

Despite their explicit lyrics that sung harsh realities, the Clan fused the Shaolin principles of discipline and brotherhood into their art. Their language, both sung, sampled, and worn as costume cohered as a complete package. What’s more, they proved the power of the collective—each member of the Clan played a significant role on every track, including “C.R.E.A.M.” They also refused to sign a record deal that allowed individual members record solo albums on different labels. This solidarity, yet respect for the individual, provoked the lasting reach of their message to keep things real, to tell the truth of economics and the effects of incarceration across generations.

Smith’s event C.R.E.A.M. continues the Clan’s project, 25 years after the release of the song, to recount the relationship between money, racism, and imprisonment. This time, her private riffs on a popular song with weighted ideas transform into another collaborative group song of sorts, and her recurring hook on “C.R.E.A.M.” becomes just one line in a very large and very shared story.

Read more stats on mass incarceration in the United States