A Zombie Fish on the Plate of Public Space: An Interview with High Line En Plein Air Artist Ei Arakawa

Ei Arakawa (b. 1977, Iwaki, Fukushima Prefecture, Japan) is known for performances that often incorporate previous artwork or collaborations with other artists. For the High Line 2019 group exhibition En Plein Air, Arakawa installs two new singing LED paintings at 26th Street, translations of Gustave Courbet’s 1872 and 1873 paintings, both titled La truite (The Trout). Brought to life by an electric current, the trout emerges from the lush vegetation of the park as an illuminated canvas. The paintings perform a song that suggests connections between the art world of 19th century France—contemporary to Courbet—and the global art world today. The song’s lyrics were written by Ei Arakawa & Dan Poston; the music was composed by Forrest Nash. 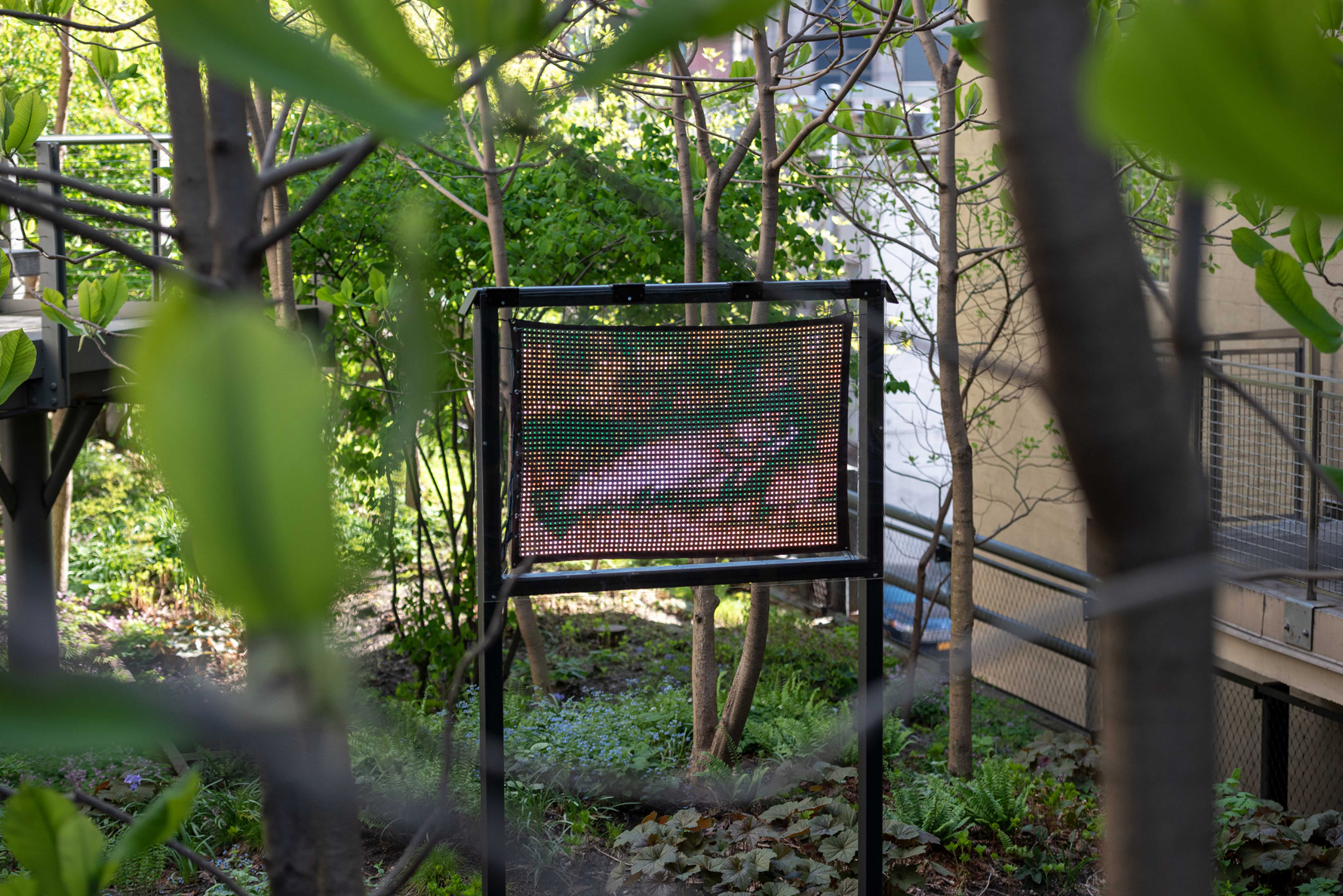 The following is a short interview between the High Line and Ei Arakawa.

High Line: Hi Ei! I like the play on words between “still life” and “still alive” built into La truite. Most still lifes depict dead or never alive objects, but here we get a creature in the act of dying. An optimist might say there was still hope for the trout. Are you optimistic?
EA: Maybe there is still a chance for trout to escape from the [lure]. I hope to have some resistance in any given situation.

High Line: Still lifes often depict symbols of mortality. Or, at least, the objects represented stood in for larger ideas. The fish, for example, represented Christ and his allegorical rebirth. What does the symbol of the fish mean to you? Why bring a fish to a park?
EA: The location I chose [among magnolia trees on the High Line’s Philip A. and Lisa Maria Falcone Flyover, near 26th Street] will be a mini-forest during summer. I had a vision that a fish floating among woods would be very eccentric. I wasn’t thinking of Christianity, but I was imagining a fish as some sort of artist representation among Chelsea’s art market, as well as a very crowded tourist destination. A sort of beauty and strangeness among the intensity of public crowds. I want artists to have a mysterious relationship with the public, rather than to act as a service provider.

High Line: It’s ironic that Courbet died by drinking, no? He took the proverbial bait.
EA: Kind of young and depressing. On the other hand, I like that his life was somewhat [incompatible] to any given structure.

High Line: Collaboration seems to be a crucial part of your practice. Would you consider this a collaboration with Courbet? Is this the “shared medium”?
EA: The song is a collaboration between me and lyricist Dan Poston, as well as the composer Forrest Nash. In a way, it is like Courbet collaborated with the [19th century] collector Alfred Bruyas [and friend to many artists, including Courbet], sort of finding a co-co-conspirator.

High Line: Courbet’s painting techniques laid a lot of ground for the Impressionists. Does your use of LED “reflect” his and the Impressionists use of light as the main act in their work?
EA: I didn’t think so. But I like [the way that] LED acts out under the sun. There is something a bit irritating about seeing LED under the sun within nature. Impressionists are very popular in Japan, but I want to communicate more with artists’ struggles or resistances. I hope those “scenarios” activate the public space in an unexpected way.

High Line: Courbet made his Trout while imprisoned for his role in the Paris Commune, for which he sought to reopen museums and salons free of government restrictions, institutions, and rewards driven by capitalism and the State. His painting is inscribed “vinculus faciebat,” or “made while in chains.” Why take this imprisonment context out of doors? Does his quest for “free” art relate to how you see en plein air art?
EA: Any public space is regulated by technology in our time. One can wonder about the condition of the public through this magical fish …

High Line: Can you tell us the story behind the song? Is this the trout’s siren song to its patrons? Or a funeral dirge?
EA: It is more like a fish’s manifesto. Half dead and half alive. It’s a zombie fish on the plate of public space. The song will be played at least once every hour. I hope some of public will encounter the song in the midst of a sunny day. I am especially excited this work will remain up for one year in this same location as trees around the work shift from green to red to nothing. This is a very unusual setting for showing my LED work. We may even change the song depending on the mood of the coming (political and social) season.